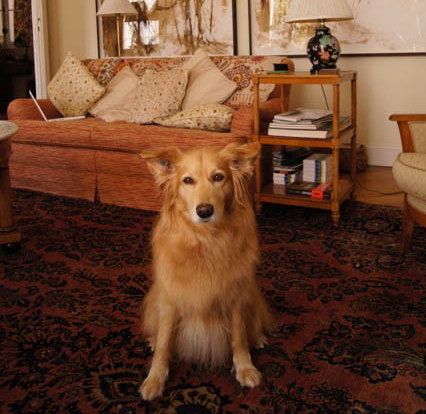 Elsa is a French dog, une Parisienne, from the top of her soft, cocked ears to the tip of her feathery tail. Though of lowly origins, she carries her fine-boned frame regally, wears her extravagant golden coat with panache and gazes confidently at the world through Cleopatra eyes. She greets friends coolly and strangers with hauteur or curiosity, depending on their appearance, or her mood. Like all good citizens of the Republic, she believes rules are made to be broken, that obedience is the stuff of fools. Life is leisurely: naps punctuated by flâneries in the Tuileries gardens and along the boulevard Saint Germain. In the elegant, manicured milieu of Paris, she is, quite simply, chez elle.

Early January 2013 Elsa was plucked from this bourgeois contentment and plopped into the gritty world of Berlin. It was a tough eleven-hour drive across the Rhine and into the heart of Mitteleuropa. The temperate Gulfstream air gave way to a continental wind that sliced down war-and Soviet-scarred streets. Snow fell, ice formed. Marauding gangs of grey and black Berlin crows swooped across the sky or huddled by the hundreds in the bare trees. At dog level, the smells were harsh, foreign. 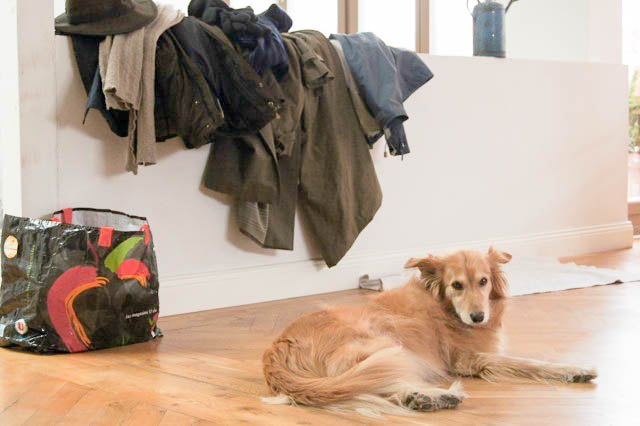 In this inhospitable, unfamiliar environment, Elsa’s composure crumbled. Angst replaced joie de vivre in her loquacious eyes. She refused to pee on the littered, alien streets. In the apartment, she could not settle, even on her bed and certainly not on the carpet-less parquet (now Parkett), through which the German heat emanated uncomfortably. Her usually insatiable appetite became erratic and often, when she did eat, she immediately threw up. During the first weeks she was never left alone, for fear of a complete psychological breakdown, not to mention the possible consequences to the furnished flat. As far as Elsa could tell, the only point in common she had with the average Berliner was a tattoo, the ID number inked into her right ear at birth.

Those initial months in a winter where it was calculated that the sun only shone 67.4 hours (i.e., less than three days) was a time of constant culture shock, whereby Elsa’s complaisant assumptions about life were turned on their head, one by one by one.

First she discovered a radically different attitude to nature and to canine freedom of movement within it. In the Tuileries, which Elsa frequents daily when in Paris, dogs are ‘tolerated’ on the raised terraces that run the length of the gardens on both sides. From this elevated vantage point, she has a pleasant view over Le Nôtre’s stunning domination of nature: the orderly rectangular flower beds, the linear alleys, the square-topped horse chestnuts. But its attractions must be experienced from a tantalizing distance and sometimes the walk up and down the chalky gravel between perfectly aligned lime trees feels more like pacing. There’s only one postage-stamp patch of grass, next to the Orangerie. It is of course interdit to both canine and human traffic, but it’s a rule joyfully transgressed in the early morning hours before the museum opens.

Even if it was blanketed with snow when Elsa first arrived, there’s grass galore in Berlin and she was allowed to roam all over it. Sudden exposure to wide open spaces frequently rendered her deaf to the sound of her own name, a phenomenon that completely befuddled the obedient German dogs around her. Berlin parks in general, she discovered, are greater simulations of nature exurbia: vast wooded areas, broad expanses of lawn and meandering paths. As Elsa would witness when the sun finally did shine, even nettles are allowed to flourish unchecked. But this is Germany after all and every tree in this aggressively untamed setting is meticulously tagged with a number.

This is also Berlin, where the ravages of the 20th century are never far from the surface. Two parks Elsa began patronizing regularly, the Humboldt and Friedrichshain, were distinguished by two hills each, one small, one large. The geological repetition seemed unusual, but also the hills themselves, since Berlin is flat as paper. The answer, of course, proved to be war-related. The Nazis had constructed Flak tower and bunker complexes to protect the city from Allied air fire. At the end of the war, the complexes were repeatedly bombed, adding to the eighty percent destruction of the city. Millions of cubic metres of war rubble were added to what was left of the towers and bunkers, thus forming today’s apparently natural hills that allow dogs to ramble, adults to stroll or run and children to toboggan.

Elsa learned quickly too that the Germans are a law-abiding people. In Paris she traverses the street whenever and wherever a break in the car traffic permits. Not so in Berlin, where the gaping avenues and boulevards are only crossed at the light and, regardless of the traffic, only when the man is green. And he doesn’t stay green for long. Not even long enough for a spry dog to make it to the other side in the course of one light. For an impatient, undisciplined Parisian, it was equal to torture.

There is one area, however, where Berliners throw rules to the wind. Although required by law to keep their pets an der Leine, very few comply and most dogs circulate freely in the parks and on the street. Such flagrant civil disobedience is overlooked because it is widely recognized that, as with children, the canine free spirit within must be given room for expression. The usually rule-flouting French adhere with much greater rigour to their leash laws--not out of any respect for the law--but because, justement, they do not believe children or animals should be allowed to let their inner lights shine. Therefore Elsa, often untethered, is something of a rogue on the Paris streets. In Berlin, plötzlich, she found herself surrounded by fellow free spirits.

Berliners, she discovered, are more indulgent when it comes to canine freedom of movement in general. In all her eleven years, Elsa, being too big to fit in a carry bag, had never ridden the Paris Métro. In Berlin, she quickly became a regular on the U- and S-Bahn. Even restaurants, she found during those first weeks when never left alone, were more welcoming. The initial shock of displacement over, she had to admit that Berlin had its charms.

Like all good Parisiens, Elsa has roots in the provinces. She was born in Tours, three hours south of Paris and reputed to be the city where the purest French is spoken. Though ‘pure’ is one thing Elsa is not. Her appearance suggests she is part golden retriever (her coat), part herding dog (cocked ears and general physiognomy), part whippet or greyhound (arched back, long neck, great speed and complete lack of substance under the abundance of fur). Despite her size, she also has a penchant for perching on laps, so it is possible that a pinch of companion dog is thrown into the mix too.

While on paper all dogs in France are created equal, pure-breeds dominate the Paris canine population. One can wonder if at times Elsa, full-fledged mongrel that she is, doesn’t feel a twinge of Otherness. Not so in Berlin, where mutts abound, most of them a far less felicitous mix than she. On some level, Elsa could feel right at home in this egalitarian society.

Routine is an important element of any dog’s psychological health. In Paris Elsa leaves the house every morning at 7.30. Every morning she meets her friends Colleen and Mousse in the Tuilieries. The owners fall into deep conversation, while the dogs sniff along, dispersed and pre-occupied in the search for food left by tourists and smells by other dogs but happy to be together. Three shorter walks, usually contained to the boulevard Saint Germain, follow during the course of the day and evening. In Berlin, the time of day for her long walk was never certain; different parks were explored. And even when some regularity was imposed—for a time midday walks in the Friedrichshain Park were die Regel — she ran into many more dogs than in Paris but never the same ones.

This was a conundrum. Despite a declining dog population in Paris (once upon a time they outnumbered children), there are still more dogs per capita: close to 200,000 for the 2.3 million Parisians living in Paris proper, versus about 100,000 for the 3.5 million Berliners. Berlin is also eight times the size of Paris, with many, many more green spaces. How could there be so many dogs in one Berlin park? Probably, Elsa would deduct, because of a different relationship to the out-of-doors. While the Parisian is just as happy to stay indoors, to own a small dog that only needs a short walk, the Berliner regularly seeks fresh air and exercise. At mid-day, pretty much regardless of the weather, the parks are full of Berliners of all ages, with or without dogs, taking their constitutional.

Things were different too, dog to dog. On the boulevard Saint Germain, when she encounters a stranger, the owner is generally fearful and suspicious (mistrust being another reason why most Paris dogs are kept on a lead). The often small dog is tugged away, while the owner claims defensively and unconvincingly that the little pooch has been bitten ‘several times’.

Berliners, on the other hand, understand the gregarious nature of animals who evolved to live in packs. Instead of being fearful at the approach of another, the dog owner realizes interaction is important for the psychological well-being of the pet. Even when Elsa bounded up to a tiny pug-mix puppy, for example, the owner, feeling it her responsibility to encourage socialization at an early age, welcomed the encounter. Doggy disputes are also handled differently. Once Elsa sidled up to two large males whose playfulness quickly turned aggressive. She scuttled away, having experienced similar situations in the Tuilieries where the owners looked on hopelessly and helplessly. Not so in Berlin. The dogs were immediately called to order and within seconds were lying dutifully and docilely at their owners’ feet. Here it’s the owners who don’t communicate beyond a mumbled Hallo, and sometimes not even. 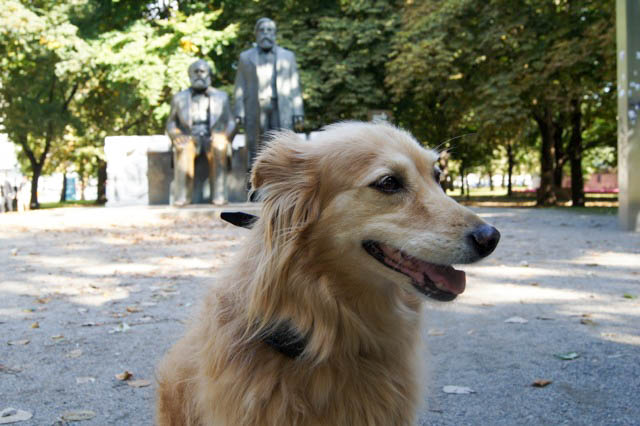 By spring a dog’s life in Berlin seemed much less foreign, even quite agreeable. The sun was shining. Elsa could now appreciate her greater freedom on the street and in the parks, could rejoice in her uncertain origins. Even if her social life remained somewhat friendless, casual relations were more natural, less complicated.

Now Elsa spends half the year in Berlin, half in Paris. Panic and prejudice no longer cloud her vision. She will never be as disciplined and obedient as a German dog but she has learned to slip easily from one culture to another, to view those very French principles of liberté, égalité et fraternité in a whole new, Berlin light.