Last night we were just finishing supper at a restaurant in the 12ème arrondissement with friends visiting from New York, when they got a text from their daughter in Salt Lake City, asking if they were all right. We all imagined some minor incident as we parted ways, they in a taxi, we on the métro. An announcement came over the loud speakers every minute, saying the police had ordered the Filles du Calvaire and République stations closed, but we still had no idea of what was happening almost right above our heads on the streets and at the Bataclan.

My phone rang as I was about to turn on the television and it was my son Christopher from London, asking if we were all right, telling us 20 people were dead, the girlfriend of a close friend of his shot but alive. William, though he'd been in the area an hour earlier, was safe, he said, their dad too. Another son Nick, who was in Paris just for the night to give a concert, was okay.

My plan on coming home yesterday evening was to post a cute little blog on the minor chaos that falling leaves create every autumn in Paris. Then I was going to go to bed early so we could get our 9h00 train this morning to Berlin.

Instead we sat numbly in front of the television, exactly as we had 10 months earlier during the Charlie Hebdo and Hypercacher shootings (again, just before a departure for Berlin). Instead of falling leaves we saw fallen bodies. We listened to shots as the Bataclan was stormed and tried to register the ballooning death toll.

After a few hours sleep, we're still here, relieved our family is safe but otherwise just as stunned, shocked and sad as all of you who have kindly sent messages. 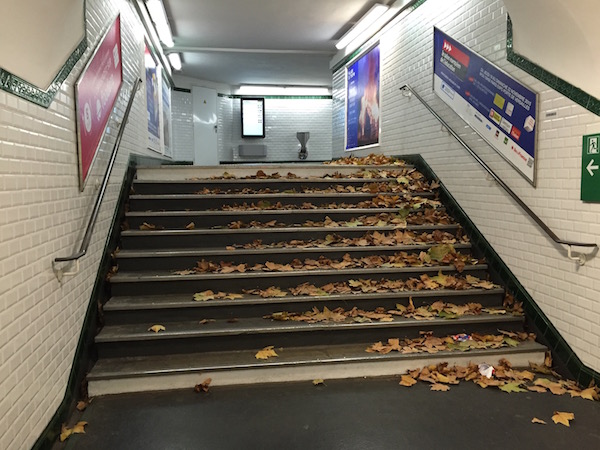