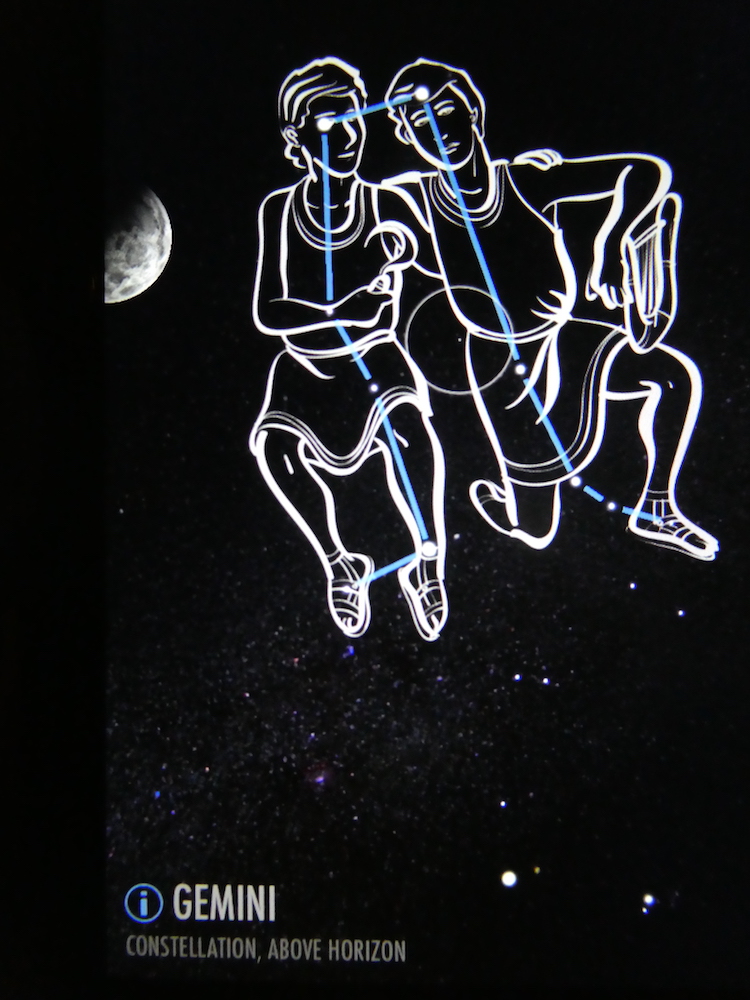 In April my mother was hospitalized, once, then twice. Her health had been declining steadily for some years. Osteoporosis had reduced her from a stately 5ft9 to a hunched and crunched 5ft2. 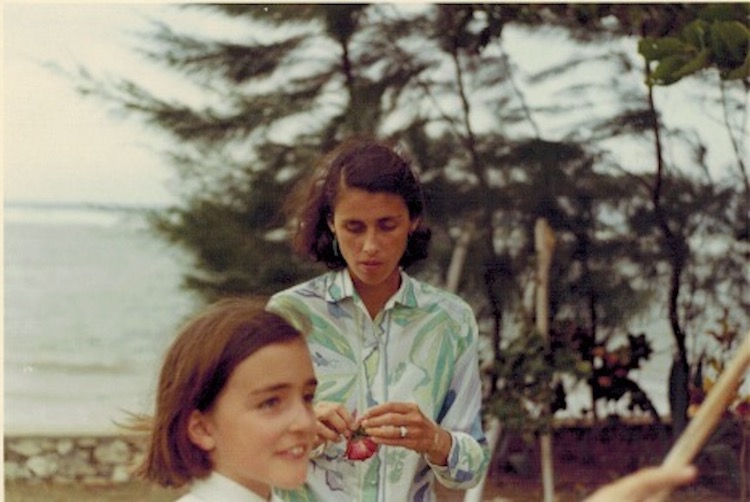 My mother and sister Catharine, 1968

She’d had several falls and brittle bones had broken. Recently she’d developed congestive heart failure. While always manically thin, she was now weighing in at 74lbs (33kgs)—“with all her clothes and shoes on!” my sister Catharine reported. Her life had become a train wreck waiting to happen.

After the second emergency hospital stay, the doctors said they could do no more; she was handed over to hospice and sent home—everyone thought not for long. I bought a five-day, fortunately changeable, ticket. Mummy, despite her shrunken body and weak heart, was tough. A fighter to the bitter end. 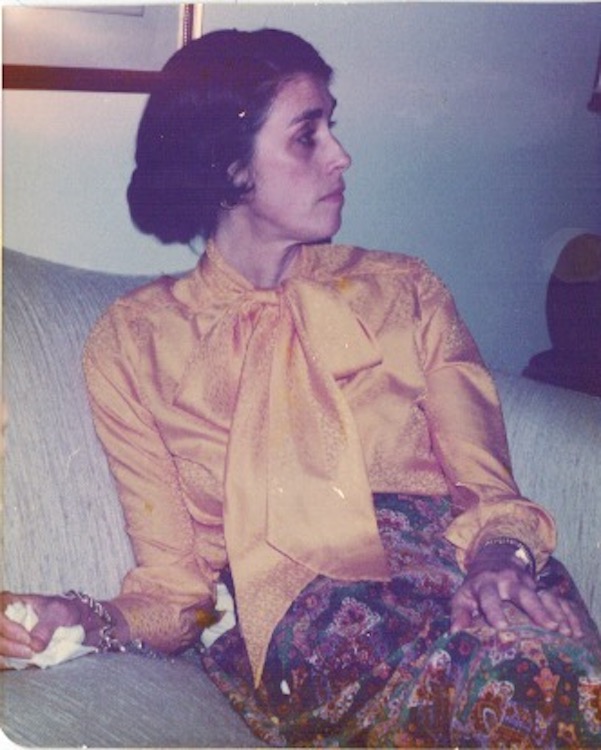 One of her tactics in the fight was denial. In this case that meant not admitting she was dying. We—Catharine and I and her main caregivers Lynn and Arlene—agreed that if this was her way of coping, so be it; we too would act as if nothing were irreversibly wrong. Over the next excruciating weeks, when one day Mummy would plunge near death only to be dressed and eating breakfast the next, we made up excuses for changed plans, thought strategically about when to come and go. I even lied about my whereabouts for three days. It added extra stress to a barely bearable situation but we were completely focused on making things easier for her. Certainly any grievances I had from what was not always an easy relationship faded into a blurry background.

Defying all predictions, Mummy kept going through her 87th birthday on the 23rd of May. By then I was back in Berlin and Catharine in Chicago. But the day finally came when, unable to get out of bed, she let the truth penetrate.

Catharine and I scrambled and by some miracle both got to western Massachusetts the next day, while Mummy was still conscious enough to be aware of our presence. Now, as if to compensate for her stubborn denial, she repeated over and over through her morphine haze: “I’m dying, you know, I’m dying, I didn’t think it would be like this.” The next morning we knew the end was near. Our deceased father, who had already visited Mummy once, was back. He was now joined by her father and mother and her favourite dog Harry. "I have to go now," she said. 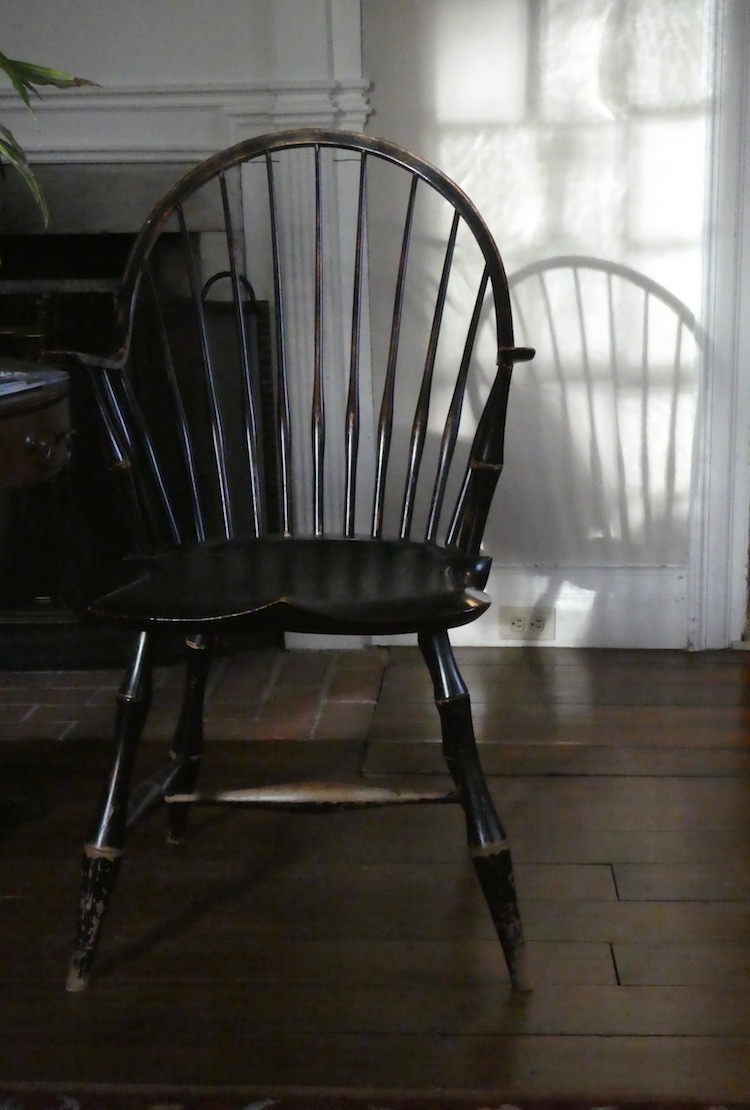 The Inn on the Green, New Marlborough, MA

There is nothing more humbling than watching someone die. And when it's the mother who put you onto this earth, the experience is also profoundly personal. All of us who kept the vigil (Catharine, Lynn, Arlene and I) said to her, as one always says: “We’re here, you’re not alone.” But of course the person in the bed is completely alone. She is dying and you are not. You feel aching sympathy and compassion, even awe, but as her breath gets shorter, slower, shallower, you fill your lungs deeply. You feel ever so grateful for your own conscious state and ability to move about the room. You feel very close to your fellow witnesses, talking and often even laughing. All the Stuff in your life, all the Strife in the larger world, seem piffling, not worth the worry. Because it may not be your turn today but it will be tomorrow. All of our lives are train wrecks waiting to happen, sooner or later.

Mummy died that evening, the 1st of June, leaving the four of us sad and drained but also relieved that her suffering, the wrenching ordeal of death, was over.

Catharine and I stayed on a few more days, getting a start on the After. Mummy made our job easier by not wanting a funeral but there was still endless paperwork, the emotionally charged task of beginning to sort through a lifetime of possessions and memorabilia and deciding what to do with it all.

People say it’s worse when your second parent dies. “A shield is removed,” is how my friend Nathaële V. put it. If the months before our mother's death were a living hell, the time since has felt more like purgatory. A murky, upside-down, in-between world. 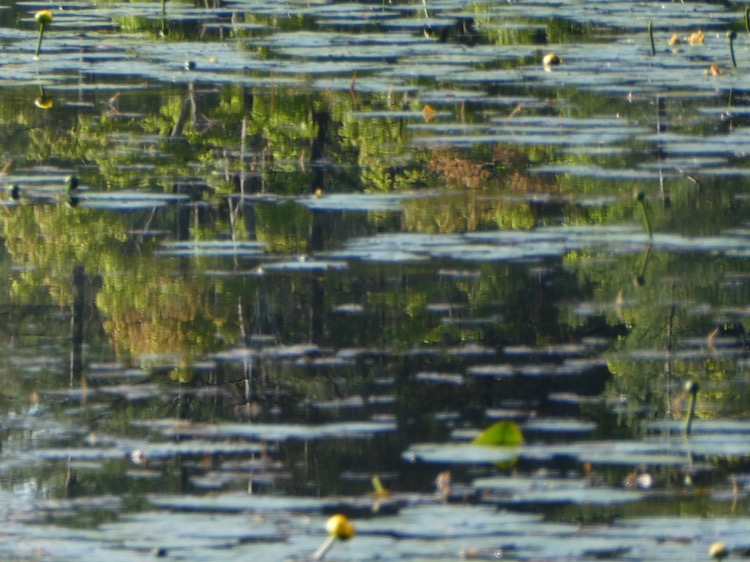 Physically I go through the motions but feel detached from my body. Mentally I can’t concentrate on anything, not even the reading of a novel, much less the writing of one. I cannot count the number of times I have started and abandoned this text.

Yet the need to write about my mother's death and something about who she was is an imperative, an essential step for me to take if I want to leave this limbo and return to some sort of normality. My film-critic friend Georgia B. wrote to me about a shared need "to write our way through things, even if it's all tentative, never finished."

With my mother almost everything went back to her lonely, only-childhood and her mother, a woman who saw fit to tell her very sensitive daughter that she never wanted children, that my mother was 'a mistake'. The only warmth and unconditional love in that household came from her German nanny Lizzie. And the animals she surrounded herself with then and forever after. There's hardly a photo of her as a girl without a dog or a pony. 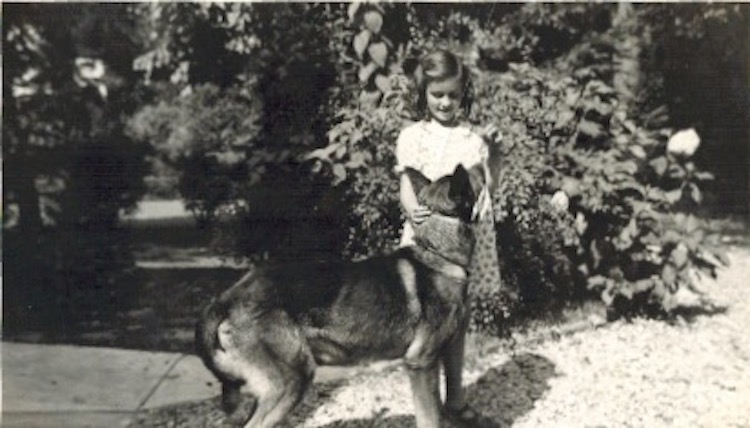 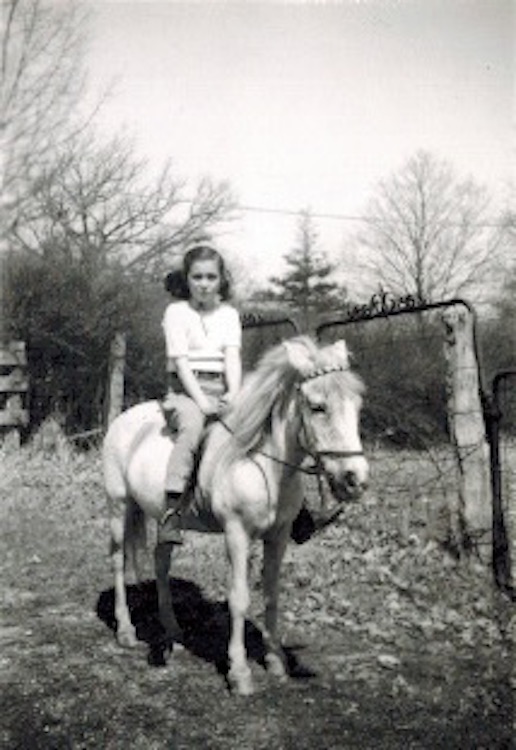 Animals were so much less complicated than human beings, their love so much more reliable and pure. As a girl she found expression for her loneliness in drawing them. As a young woman she drew lots of solitary people—an old lady on a park bench or a child forlornly holding a bunch of balloons. At some point she turned to still-lifes and kept drawing those until the day before she died.

Her art says much about her as a person and the way she lived: meticulously constructed, with an unfailingly soft, sensitive touch and a rigorous attention to detail. 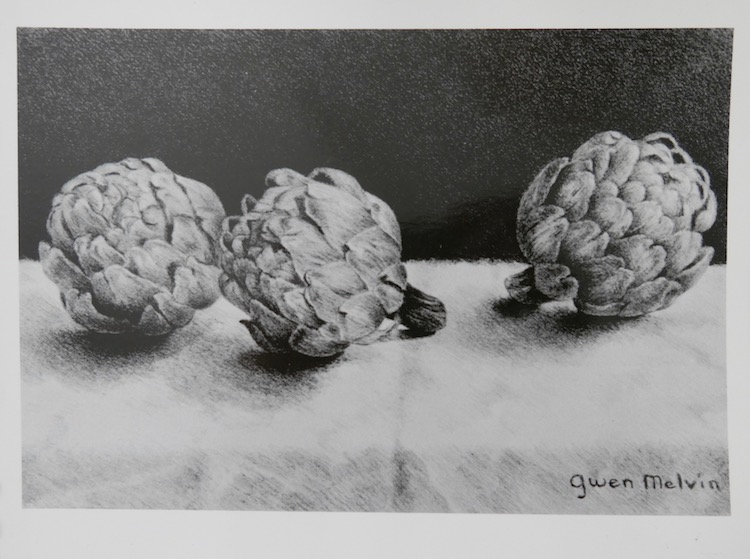 My adoring father always said of his beautiful, naturally elegant wife who needed her life just so: "Your mother is a finely tuned instrument." Yes, but a resistant one. When he died she surprised us all with her ability to take control. To hire people as necessary, even fire those she did not like. When the house she and my father had built deep in the woods started seeming too big and too isolated, she found a small place closer to the village. It was a crummy little house—'a disaster', my husband David declared when he saw it. But she asked the advice of her architect and friend Patt S., then gave him a free hand to improve it. He put two large windows in one wall, built on a studio, a deck and a screened-in porch. By the time he'd finished, the house was sweet and charming. 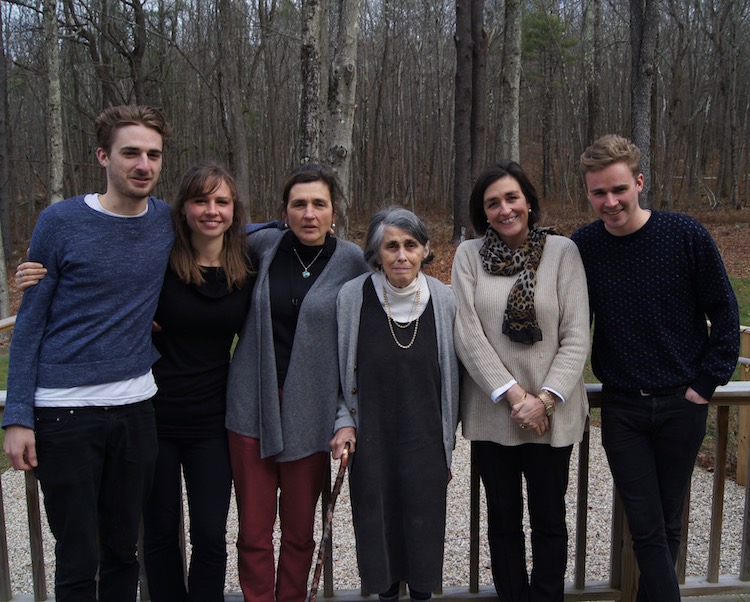 A gathering of the generations on the deck, 2013

The night I arrived in the Berkshires late April there was a clear, star-studded sky and I tuned in to the Star Gazer app on my telephone. There, right next to the half moon directly over my head, was the constellation Gemini, my mother's sign. I'm not a believer in astrology but it did get me thinking.

She had a twin buried deep inside her. And the twin, I believe, was a cauldron of emotion and appetite, a person who would have drawn one of those artichokes in its post-prandial state, complete with teeth marks on its plucked and scattered leaves. But she was not born in an age or a milieu where you exposed your inner artichoke. She kept the turbulent side of herself tightly under wraps and her determination in that was as strong as in everything she did.

Apart from the constant pain and the physical constraints of the osteoporosis, about which she never complained, I think she was particularly happy in the last years of her life. That little house really suited her. She had pared down her possessions to the things she loved most. She had her dog and two cats. She drew every afternoon. Friends stopped by; until the last year she played bridge. And she had surrounded herself with a team of people whom she loved and who loved her in return.

One of my mother's most frequent refrains was: "I'm so lucky." She was fortunate. But luck is more than coincidence. It's partly what you do with your circumstances. And what she did was create a life for herself just the way she would have drawn it. 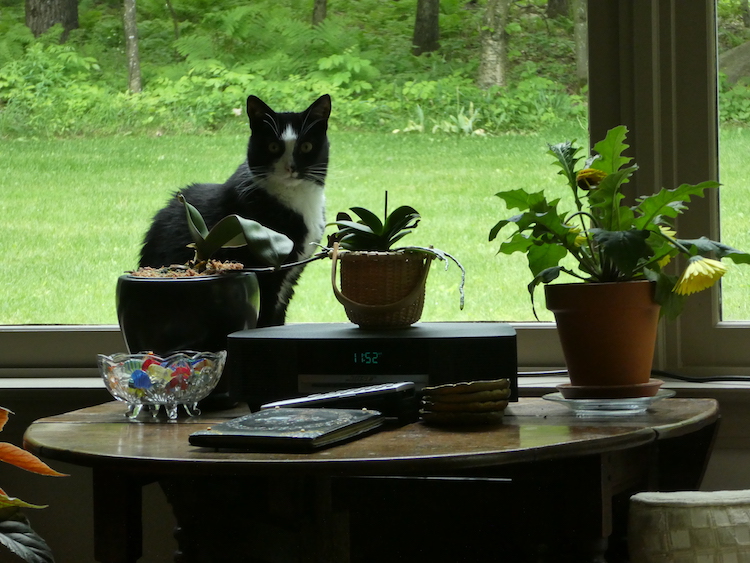