Many people have asked about my son Christopher's friend who was shot in both legs during the Paris terrorist attacks on 13 November. Where she was that night and how she is doing now.

Though I wasn't planning to write a blog today, Christopher sent me an article from Le Monde a few days ago and this is a story that needs re-telling. 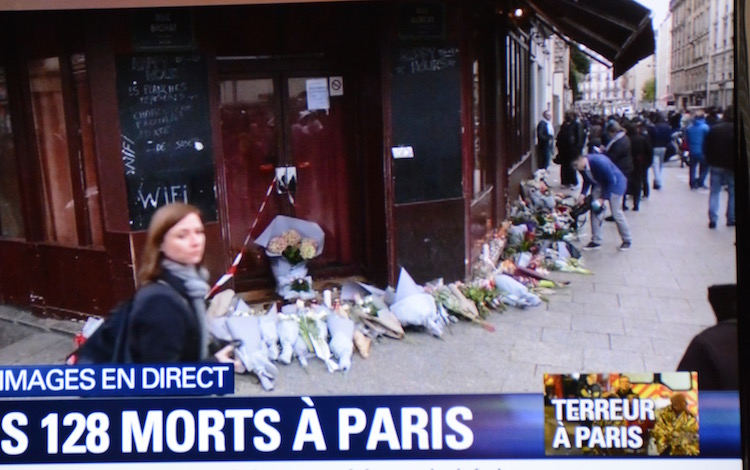 In the article*, written by Isabelle Rey-Lefebvre, Jérémie Zerbit, a pharmacy student, recounts that he was sitting inside Le Carillon, at the back, when the gunmen attacked. At first inert from shock at the carnage around him, he was roused by others, including the handful firemen who arrived quickly on the scene. They assigned him to help a young woman, conscious but sitting in a pool of blood from gun wounds to both legs. It was Caroline, Christopher's friend.

Jérémie used his belt as a tourniquet for one leg, a tea towel for the other. Leaving aside his own phone that was vibrating constantly with messages from worried friends, he called Ruter, Caroline's boyfriend, to reassure him that she was alive. Then they waited for the ambulances.

In Jérémie's own words to the journalist:

"She told me that she was called Caroline, that she'd just returned from Iran...

"...I'll never forget that young woman's courage. I was surprised by her smile, her gentleness and her patience. She saw my distress and it was she who encouraged me, who helped me help her. I ventured a look outside and saw all the bodies covered with white sheets, some wafting in the wind, exposing disfigured faces. People like me, young...I was undone and Caroline said: 'Don't look.' To distract me, she even asked: 'And you, Jérémie, what do you do in life?"

Doctors from the nearby St Louis hospital arrived and Jérémie persuaded Caroline to take some morphine. Finally, after an interminable hour-long wait, the ambulances arrived. Jérémie gathered Caroline's belongings, put her shoe in her bag, and she was taken away.

Caroline was operated on the next morning. Once released from the hospital, she went with Ruter to her parents' in Normandy. Fortunately, no bones were hit and she will walk again. In fact, she told Jérémie on the telephone, she's planning to dance in 2016.

Many thanks to you both, Caroline and Jérémie, for showing human nature at its best, in the midst of its worst.

*unfortunately, the on-line version of the article, published 24.11.15, is locked into a subscriber's fortress and I can't even provide the link. Nor will my pdf copy reproduce here.