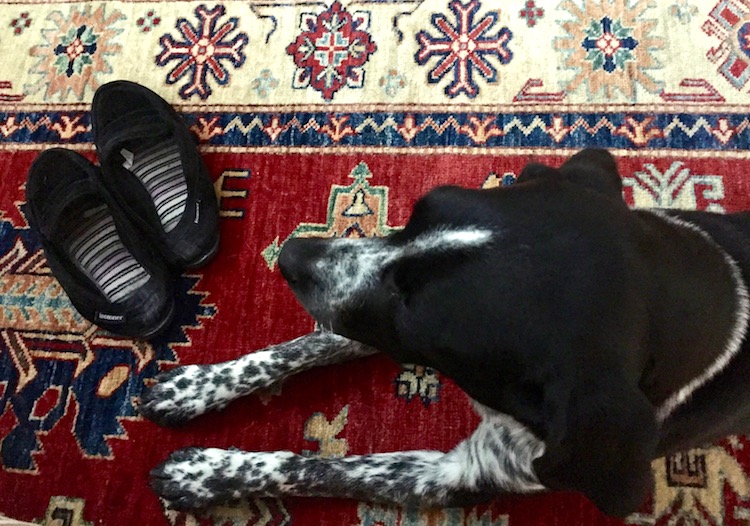 “Have you done any yoga?” asked Anna, the dog coach, as we sat around our living room for the first session.

We had met her at the vet when we took Tasha in for an eye infection that wasn’t going away because even David and I together could not get the drops in her eyes. Each attempt was a wrestling match and strong Tasha, even stronger from all the exercise she gets here in Berlin, won every time. I had several bruises on my leg to prove it.

Anna was the vet’s assistant and she showed us how to embrace Tasha, under the belly and around the chest, against the holder’s body so that the dog feels safe, unthreatened. And indeed within a minute the vet was able to administer drops. In the course of the consultation she continued to give advice about things we could do to put the dog at ease. As we were leaving we asked Anna if she knew of a trainer and she said: “I’m actually training to be a behaviourist so maybe I could help you.” 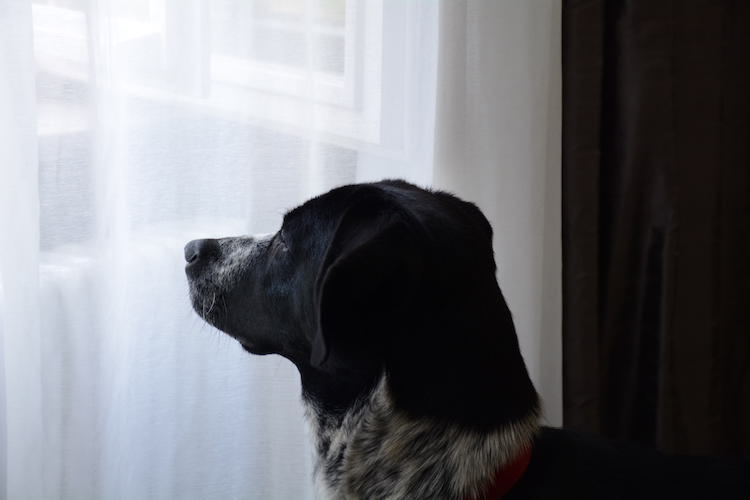 When Anna arrived several days later, Tasha barked as usual but very half-heartedly and only for a second. By the time Anna had her coat off and was sitting down, Tasha was lying at her feet. Most unusually she fell asleep and didn’t budge during the good half hour Anna asked us questions about Tasha’s history, about her life with us, about what precisely the dog’s problems were.

“I think she’s ill,” David whispered to me. “Or she ate something in the park this morning with drugs in it.”

The other problem, as I’ve mentioned before, is Tasha’s barking outside. I don’t mind when it’s at an abandoned dish washer in the woods but I do object when it’s at a human being minding his own business or at another dog just because she, Tasha, is on the lead.

It was while we were preparing for a walk that Anna asked the yoga question. “Because you must walk the dog with good posture. Shoulders back, chest out, back arched in. You must pass on a positive attitude to the dog, make her feel you are there to protect her. Body language is very important with dogs.”

Outside Anna said: “She must be on a short lead. Commands must be given only once and praise dosed out parsimoniously. No chatter.”

Tasha usually pulls hard on the lead. In Anna’s company, however, she walked meekly at my side. When we crossed paths with other dogs, she hardly seemed to notice them. Only once did she react to another dog and give a feeble bark. “Keep going,” said Anna. “The past does not exist. Only look forward.”

Needless to say, this seemed nothing short of a miracle. “How do you do it?” I asked on our return. Anna shrugged modestly. “Vielleicht Ausstrahlungen” (vibes maybe).

Needless to say too, once Anna and her vibes were gone, Tasha became Tasha again. Or almost. There were some lasting effects. She was a bit calmer, did pull a bit less, listen a bit better. Maybe because I was working on my vibes too. 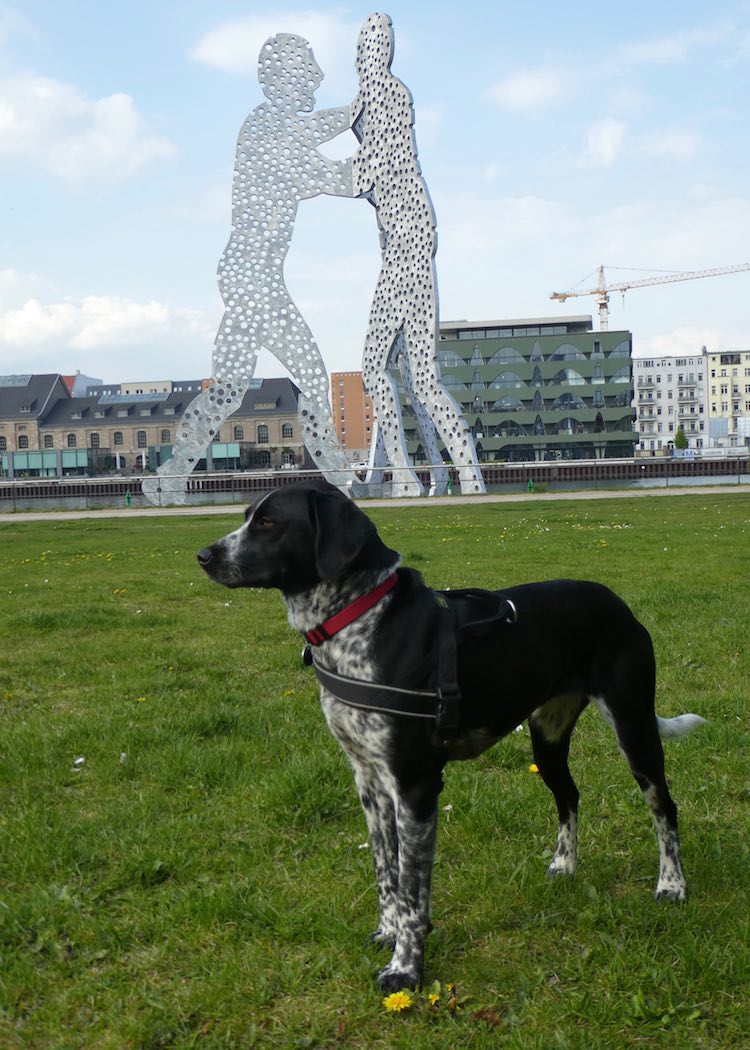 I have become more conscious of my posture, have tried to stride out with confidence and energy and transmit this body language to the dog. I am trying not to look back, not to think about the past (much harder than the posture!).

Anna’s lesson got me thinking about words. I tried to see things from Tasha’s point of view. Usually I walk around chattering to myself and to her. To Tasha's ears it must sound like an irritating drone, the equivalent of car traffic on a busy road. I conjured some of David’s and my conversations:

What’s a dog to think? I am trying to be more laconic, to think before I open my mouth.

Today I had a second session with Anna and I am pleased to report that Tasha was not quite so malleable. We had to practise her staying on her bed about 25 times but she did finally do it. During the walk she pulled, she barked at another dog. But we did some exercises of stopping and starting, changing the pace, that helped a lot on the pulling front. We did some other general obedience exercises on the enormous lawn in the park.

"There are two ways to train a dog," said Anna. "By force or by patience. Patience takes longer." Then with a smile: " In Tasha's case, where fear and only fear is behind her problems, patience is the right way forward."

With Anna leading us on, I'm finding it a lot easier to muster. 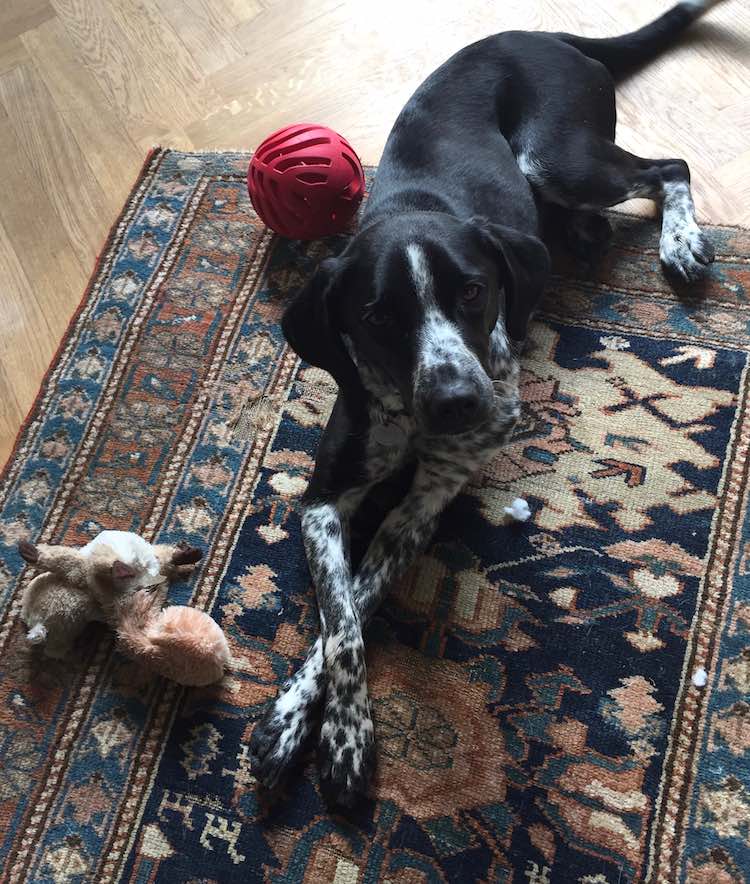