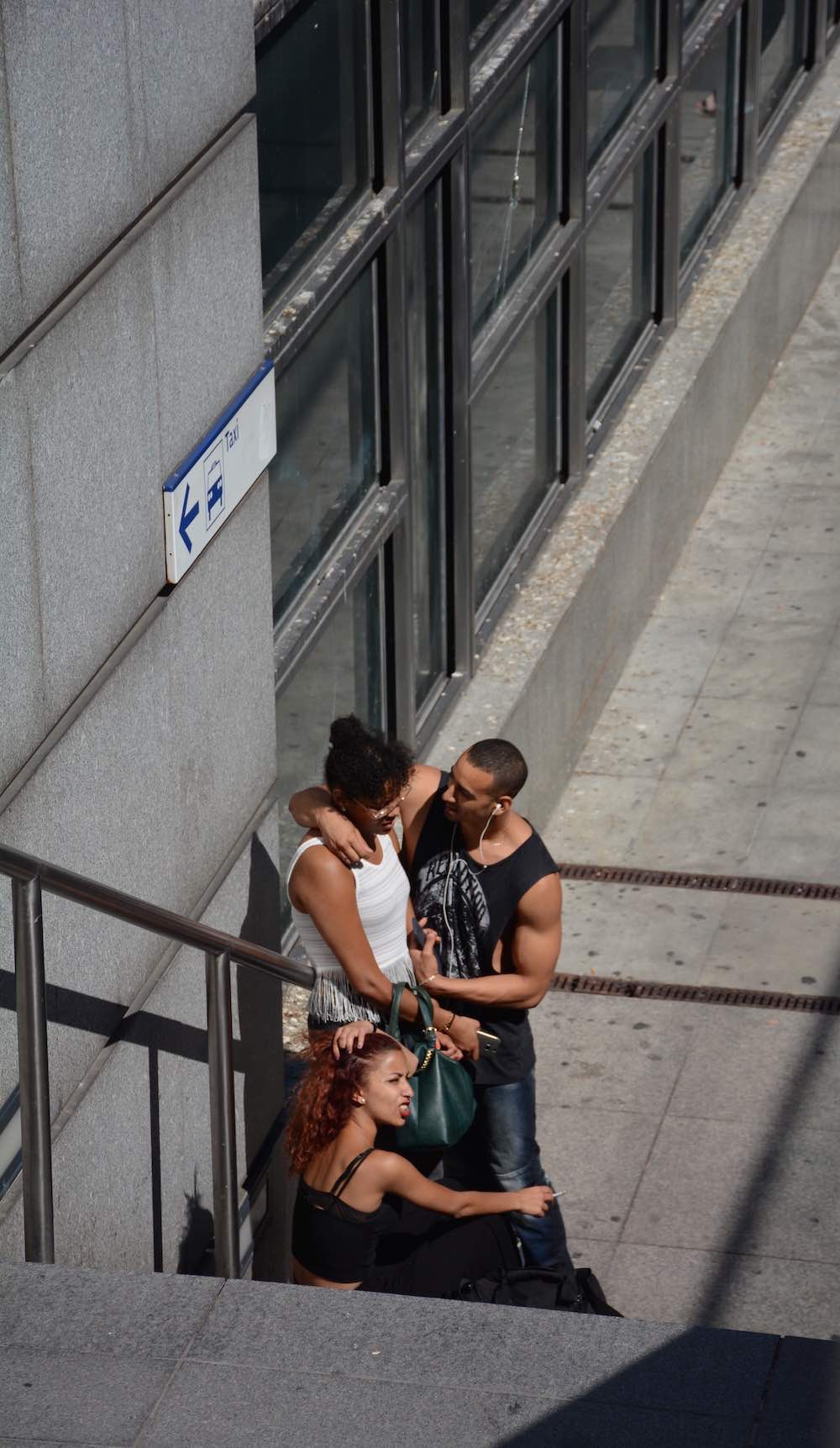 A couple of weeks ago I was watching Roland Garros (French Open) on television. Frequently the camera would pull back for an aerial view and there at the top of the screen, beyond the Bois de Boulogne, loomed the island of sky-scrapers that constitutes La Défense.

It struck me that I’ve been writing a lot about contemporary architecture in Berlin and even London and ignoring Paris. I was also reminded that though I pass underneath it every time I drive to Normandy, I had not actually visited La Défense since Mitterrand’s Grande Arche was finished in 1989.

Some history: the area was conceived in the 1960s -‘70s to provide modern office and living space—and a modern face of Paris. In a very French, geometric approach to urbanisme, it was built in a cluster at the western edge of the city and extended the axe that begins at the Louvre and runs along the Tuileries, the place de la Concorde, the Champs-Elysées, the Arc de Triomphe, the avenue de la Grande Armée and the avenue de Neuilly. To break with tradition (for all their bourgeois ways, the French have a radical, revolutionary side too), urbanistes designed a raised, circular area of concrete, pedestrian sidewalks, a sort of pedestal, on which the towers could really tower. Car traffic would go under and around on sleek expressways. 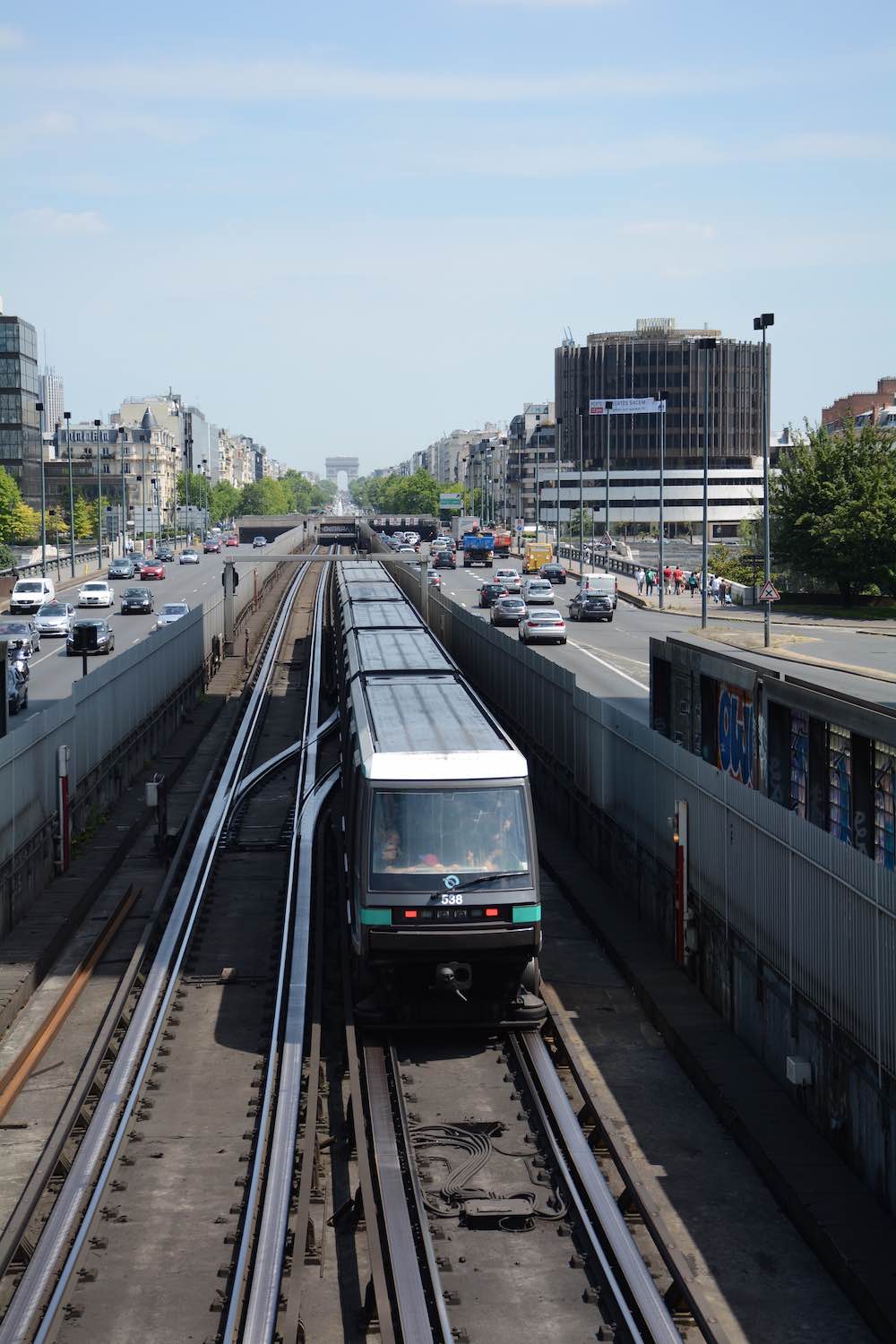 When I visited in the 1980s, there were lots of stained, tired buildings that had not aged well. The silence of the concrete, pedestrian expanses was eerie and the underground shopping mall was downright sinister. I remember being disappointed by la Grande Arche, with all the wires and wind-breaking screen in the middle that ruined its clean lines. And astonished that just beyond the new monument, La Défense just ended, just dropped off into typical Paris suburb. 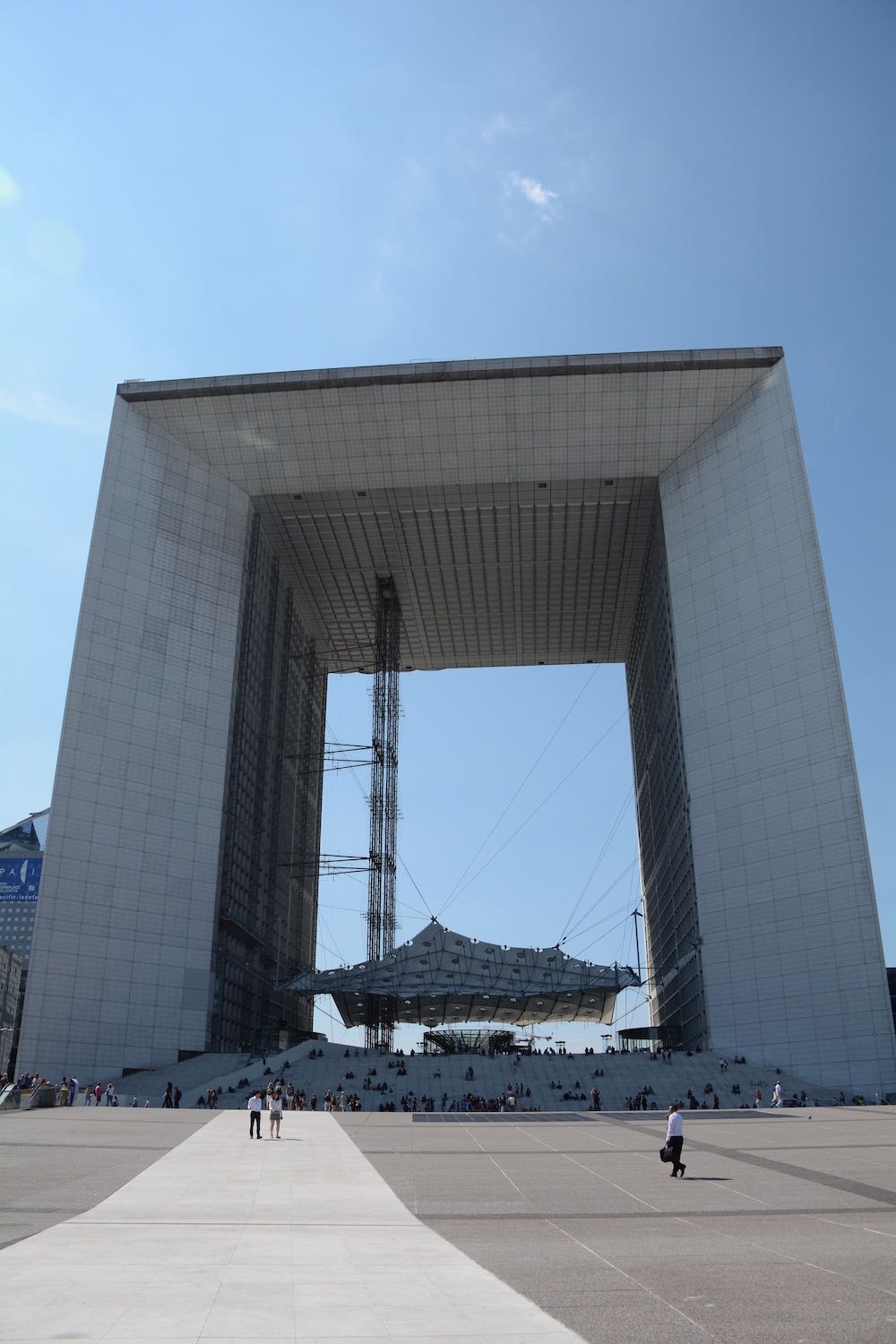 These days, as I witnessed on Wednesday, it has expanded and there are some quite stunning, ultra-modern buildings. 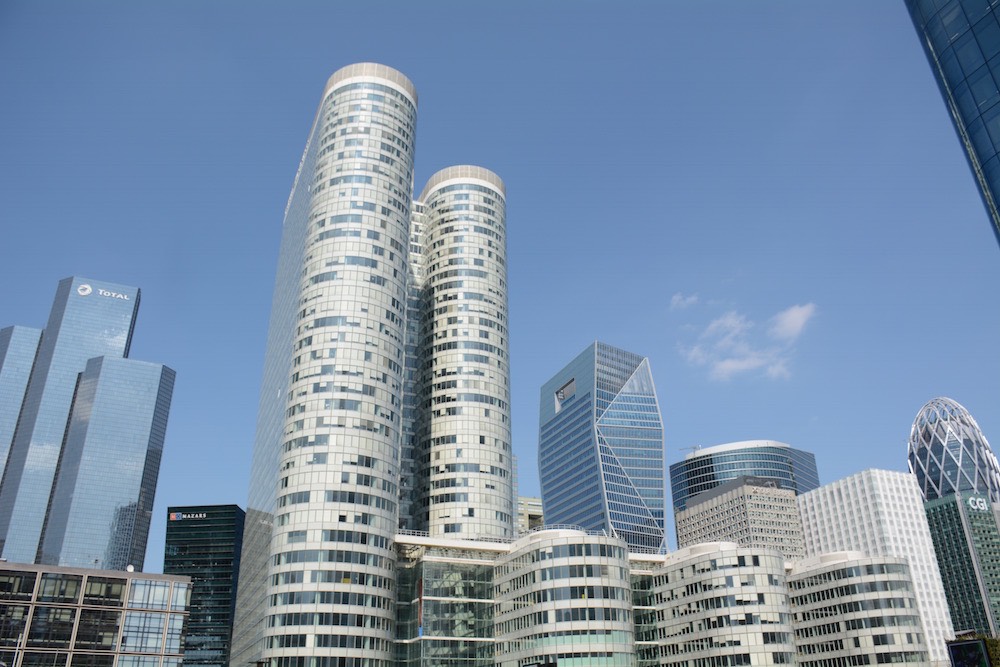 The ambiance seems to have evolved with the architecture. The car-free hush is less eerie. People stroll, smoke and chat, sit under trees and in the cafés. The young, multicultural face of France is everywhere apparent. 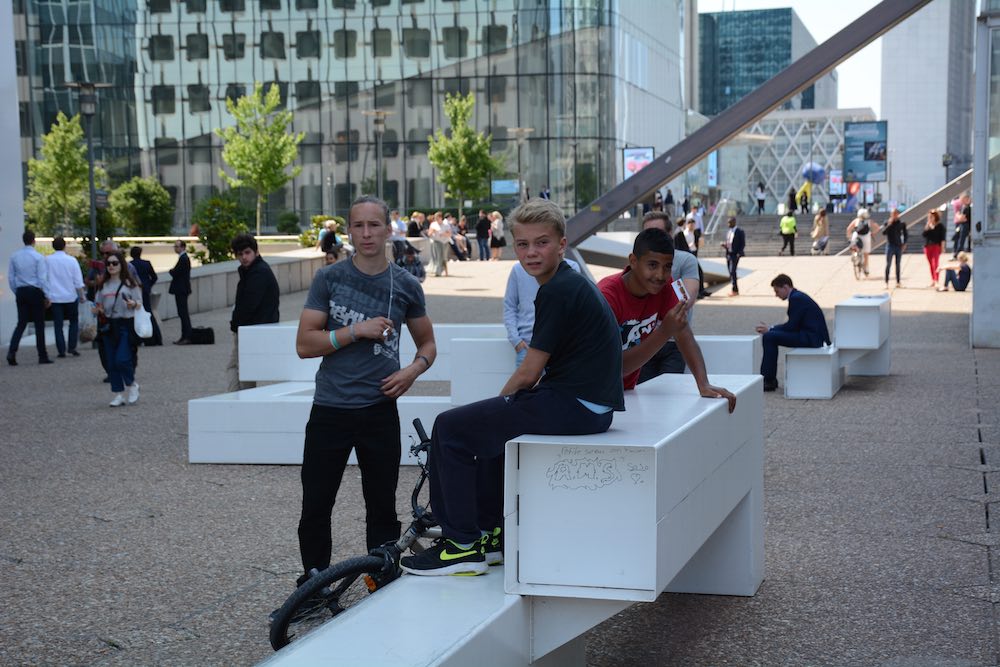 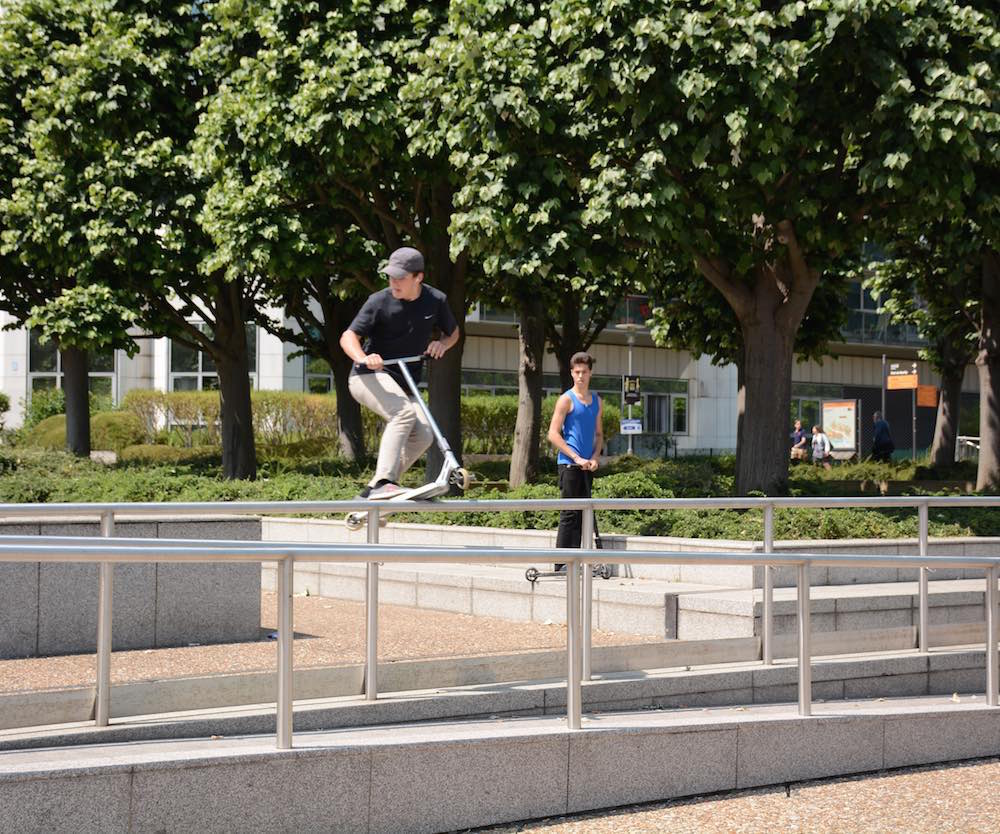 In this raised, artificial land, you no longer feel you're living in the most pessimistic country in Europe. Here people have jobs and do flips and on the surface at least, exude a sense of well-being.

Which doesn’t mean the underbelly has been eradicated. Down the stairs, at mid-earth level, the '60s-'70s bleakness is very much in evidence; there are still lots of dirty, abandoned corners, not to mention homeless souls. 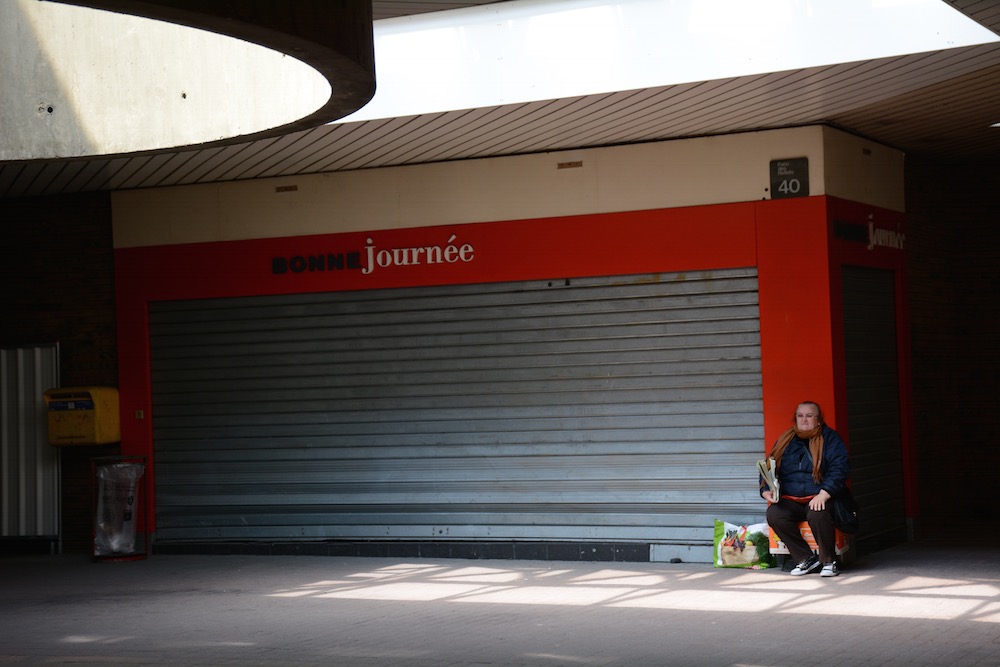 I got back on the métro wondering if I'd just witnessed the face of a truly modern France...or a bubble more reminiscent of the factitious Truman Show.