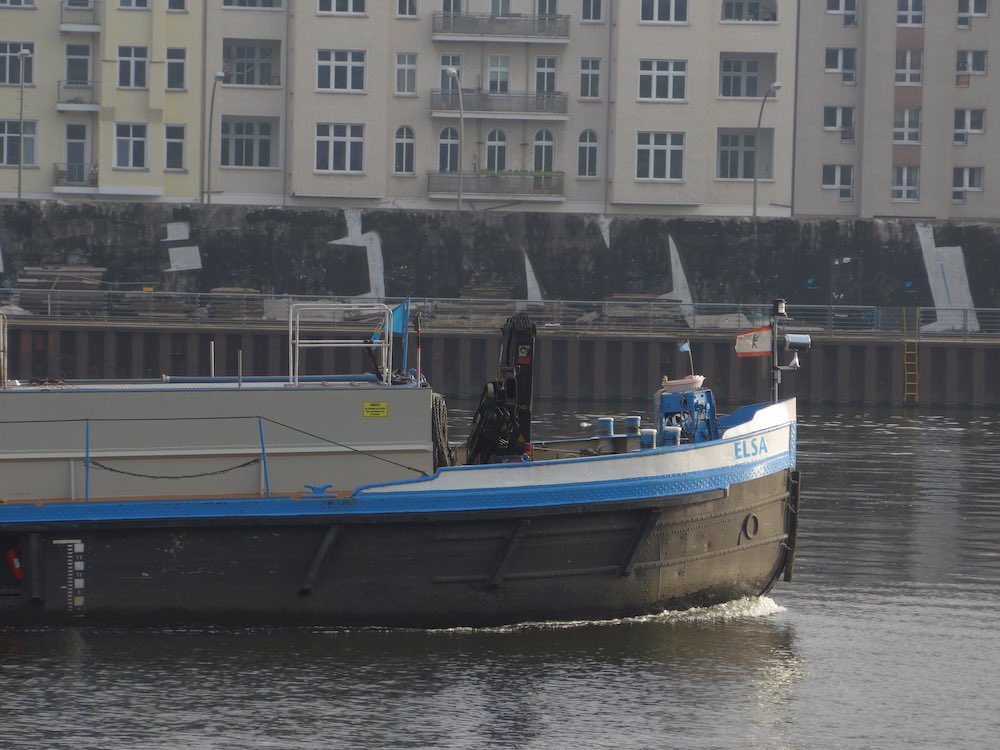 In my pre-bike Berlin days, I often looked longingly at some spot that seemed just a bit too far to walk in the time available. So the last couple of weeks have offered the exciting possibility of actually getting to some of them.

The one I looked at longingly every day while walking Elsa is a remnant of the Berlin Wall across the river (pictured above, beyond the barge). It stretches between new or restored buildings and the Elsenbrücke, the bridge connecting Friedrichshain and Alt-Treptow. Given its prime location, its continued existence is quite likely due to one of the still unsettled property disputes in the former East Berlin. Last week, at a moment when I could no longer stand the mind-numbing hammering, hewing and drilling that is still going on around our building, I rode over there. 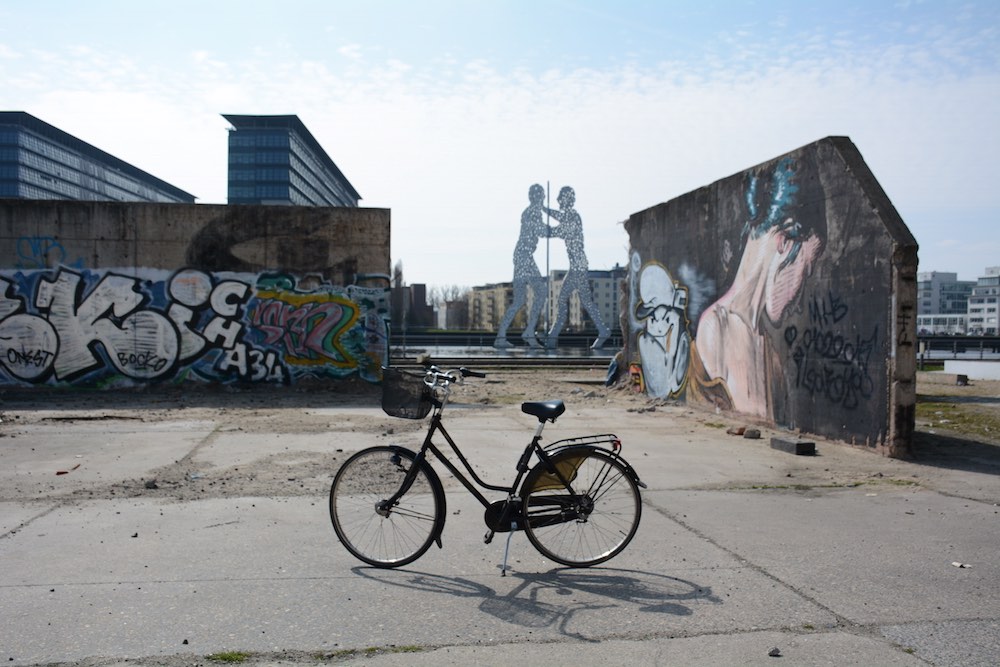 About a kilometre up river from the East Side Gallery tourist attraction, it's about a hundred times more interesting. The area looks as if it hasn’t been touched, except by graffiti-ists, since the original bursts through the Wall in 1989. Here one can still feel the bleakness not just of this gigantic cement barrier but also of the wasteland around it. 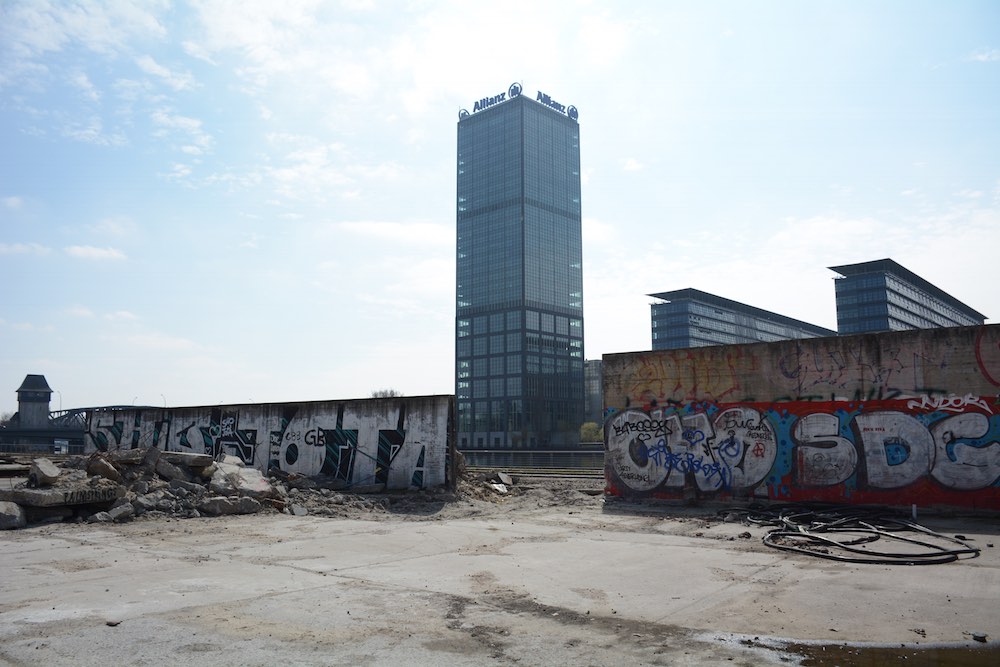 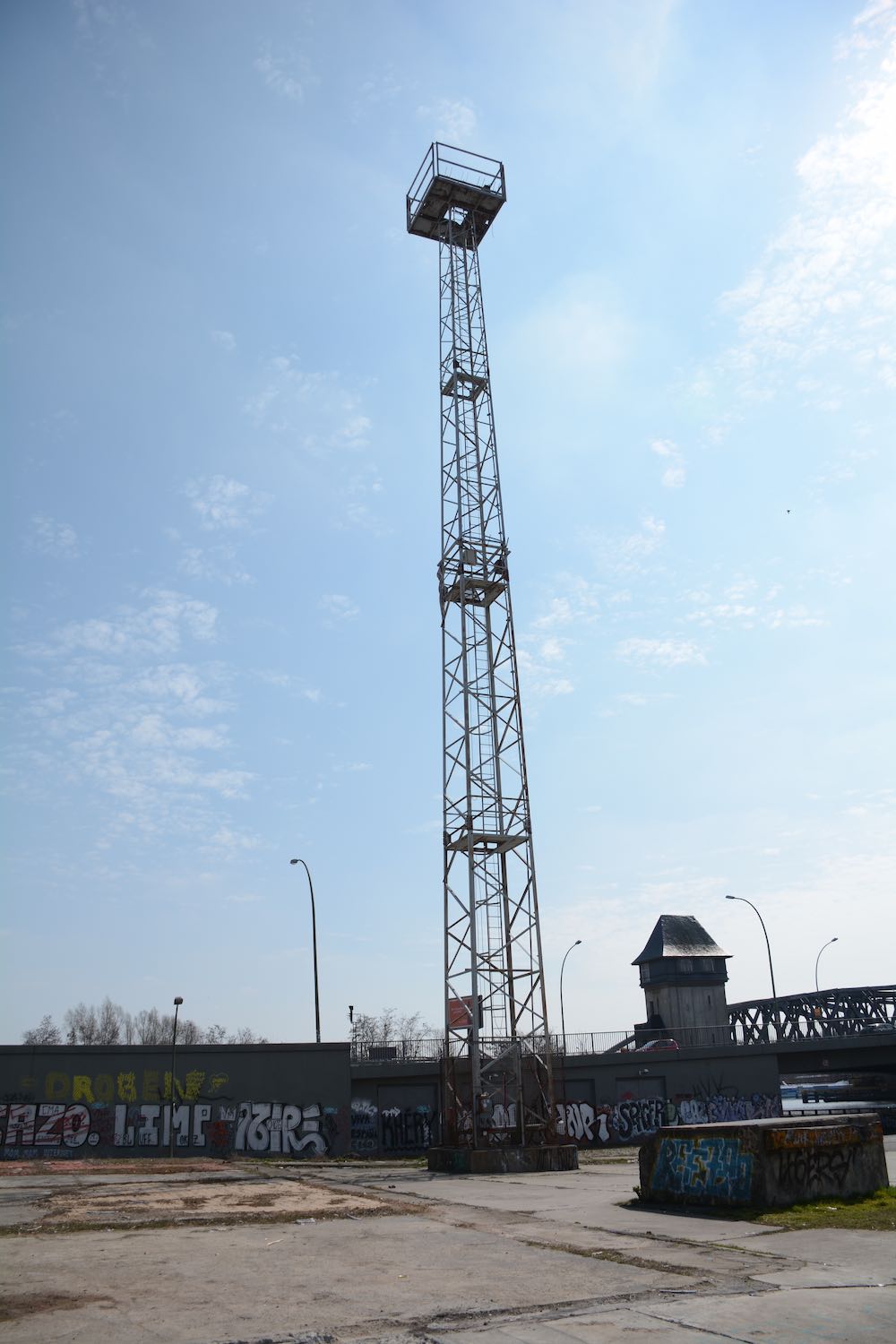 And be reminded that this pair of turtle doves would once upon a time have been shot before they got anywhere near their sunny perch. 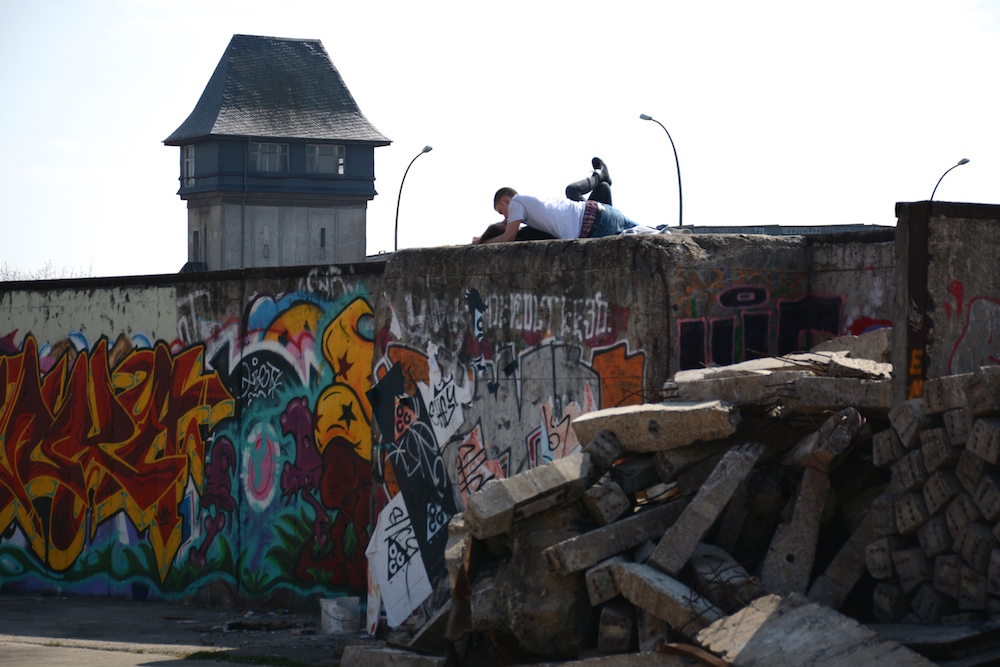 Another tantalizing point in the distance was this huge wheel that looms on the horizon even farther up river. 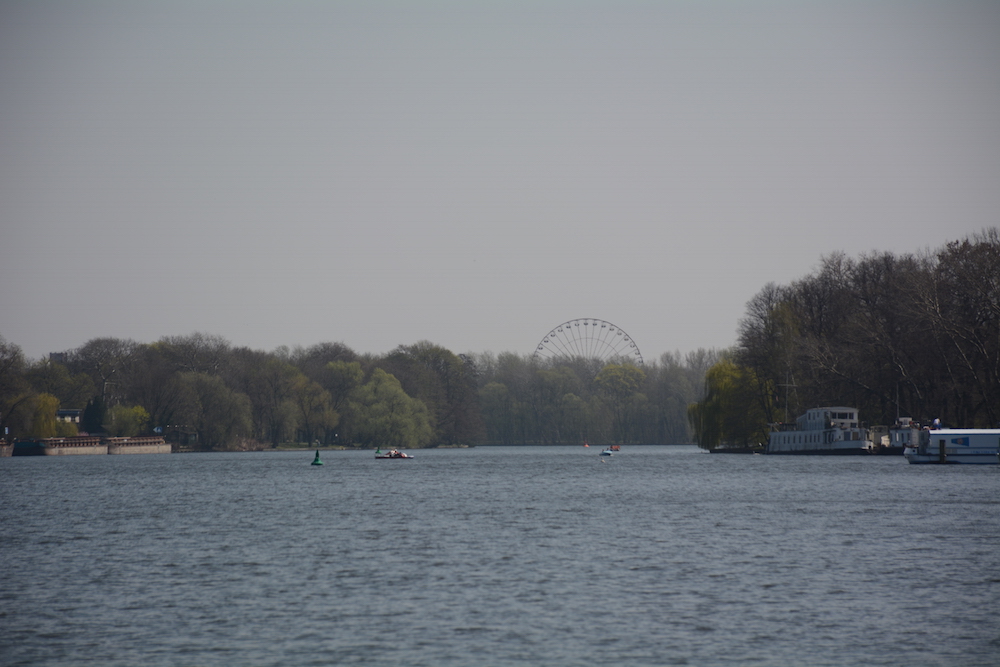 The other day, between the electrician’s departure and the carpenter’s arrival, I rode through the Treptower Park to the wooded area abutting it, Plänterwald, for a closer look. Currently the forest floor is covered in a bed of wild garlic and I am sorry I cannot transmit the heady smell and the sweet birdsong that complete the picture of this little sylvan paradise.

Suddenly one runs into this: 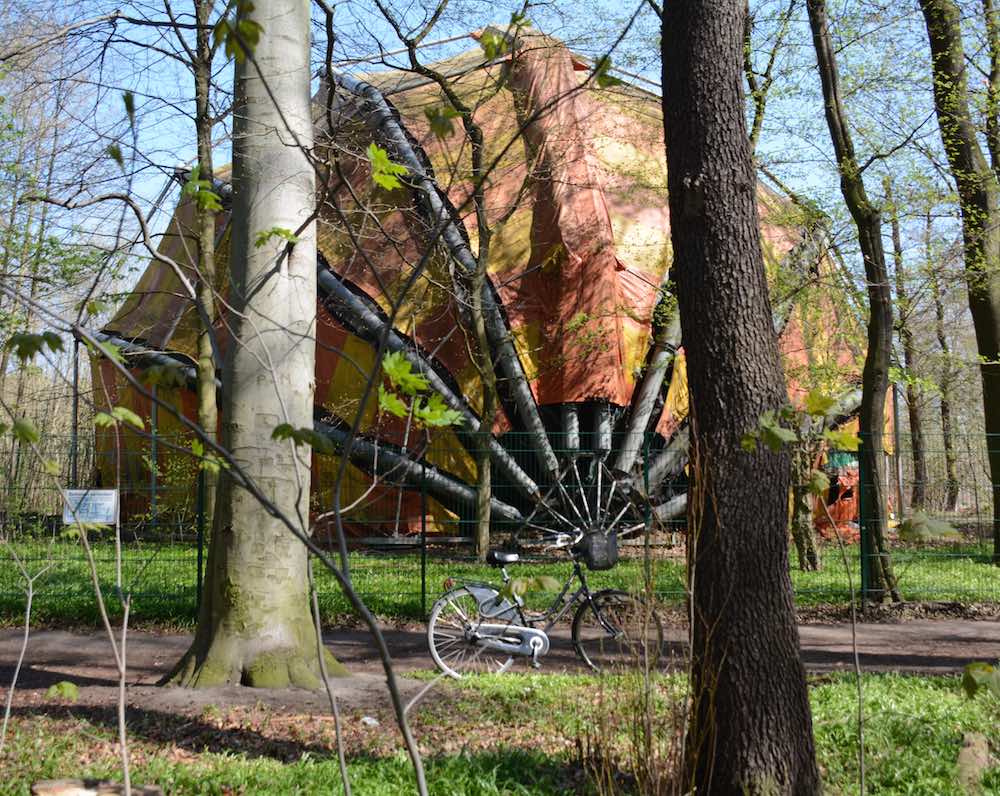 As I now know from the internet, the fenced off area is a 30-square hectare abandoned amusement park. The only such fun fair in the GDR, it was consigned after reunification to Norbert Witte, a carnie with a shady past that somehow did not come to light until it was too late. By 2001 the park was around €11 million in the hole. 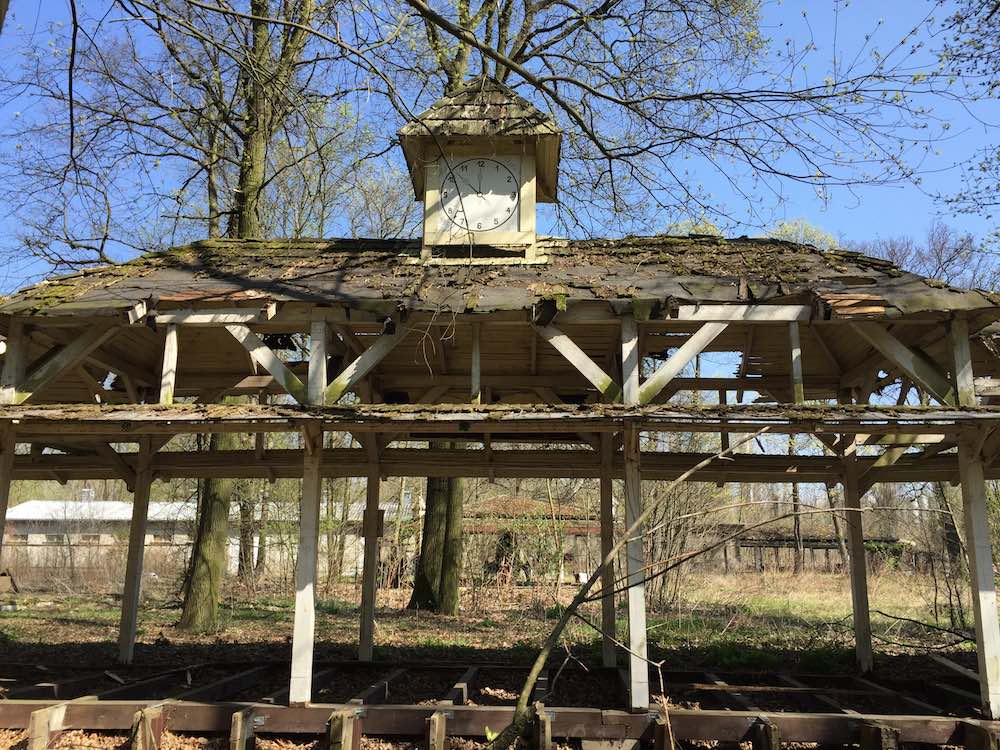 A year later Herr Witte was allowed to depart for Peru, with his family, several co-workers and six attractions (Fliegender Teppich, Butterfly, Spider, Baby-Flug, Wild River and Jet Star) in tow. He claimed to be getting the rides repaired in Lima. Who knows how the authorities fell for this. When Herr Witte returned to Germany for other legal trouble in 2004, he was caught trying to smuggle 167kg of cocaine in one of the masts of the Fliegender Teppich (Flying Carpet) that had accompanied him on his return journey. 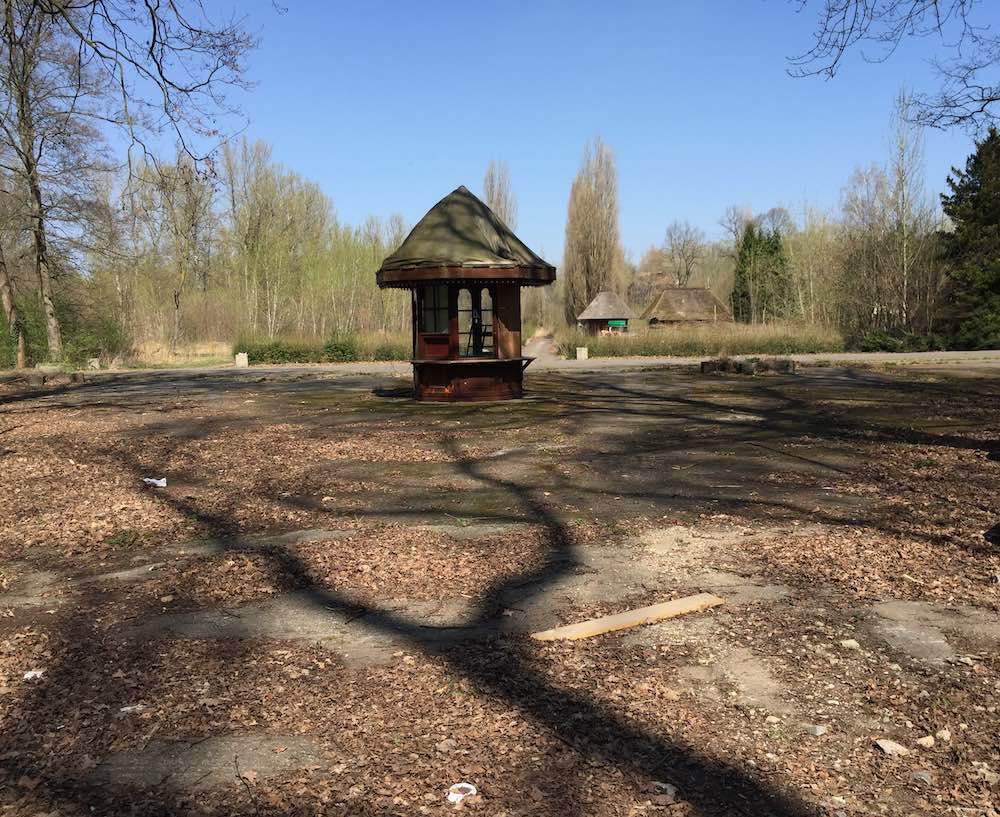 Subsequently the park was partially open from time to time, until a fire in September last year caused serious damage. The city is still looking for investors and Herr Witte, released early from prison after a heart attack, is sometimes (incredibly) cited as a contender.

As with the piece of Wall across the river, it is now a different sort of attraction, the kind that abound in Berlin: 19-20th century archeological ruins, often with a crazy story attached (see also, for example, Devil's Mountain and the NSA, 13 Jan '14).

People sometimes say we've moved to reunited Berlin too late. But I don't have to ride very far to know they're wrong. 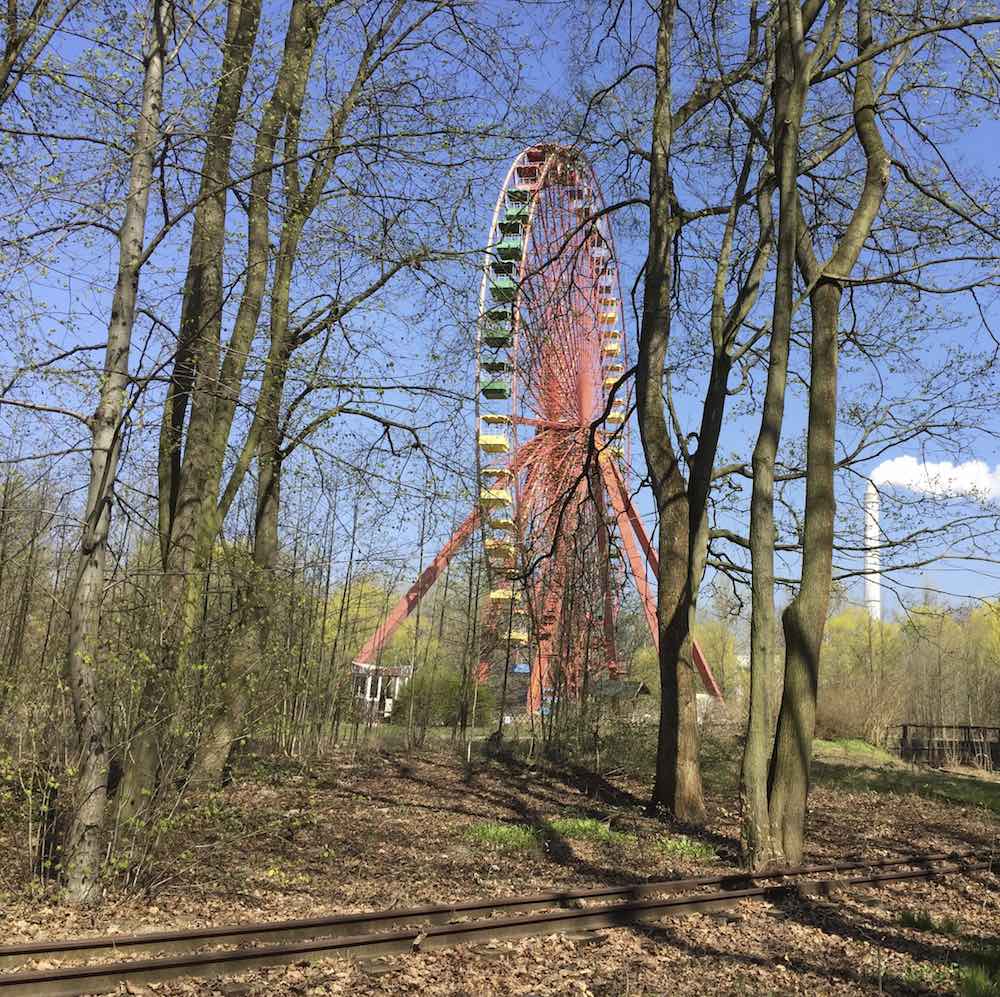