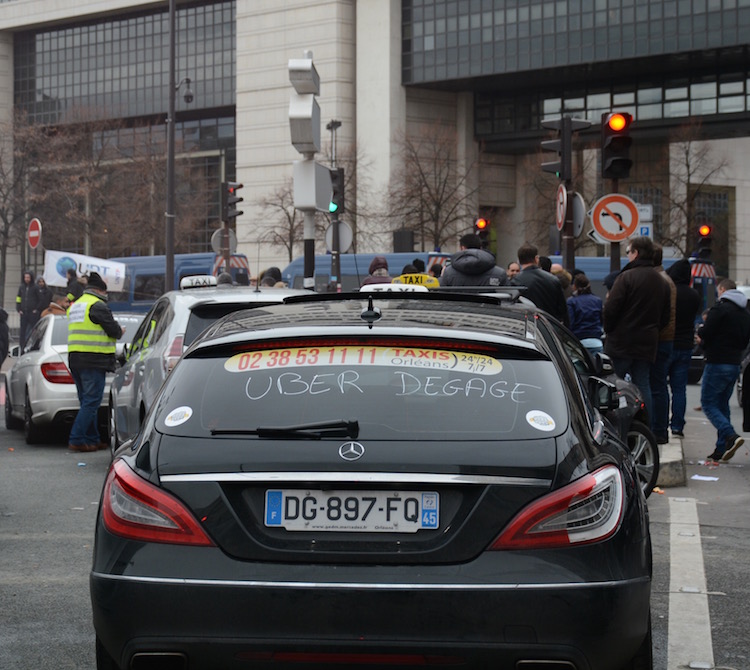 Real change in France, it is often said, only occurs through revolution. But most of the rebellions I can think of, since 1968 at least, have been about stopping change. Including the one that is brewing at the moment. Throughout the country this week, taxi drivers have been on strike, blocking roads at airports and other strategic points, in protest against the invasion of VTC (voitures de transport avec chauffeur). Translation: Uber and its acolytes.

In Paris, anyway, it was easy to see this one coming. Since Uber arrived, I have watched the growing number of green-lit taxis searching for a fare (taxis en maraude). They roam the streets like famished sharks. Others idle at taxi stands in crammed lines that grow way beyond the allotted space. I apologize for the poor quality of this photo, but frankly, I didn’t dare try to take one during the day for fear of reprisal. Taxi drivers are volatile enough, even when they have passengers. 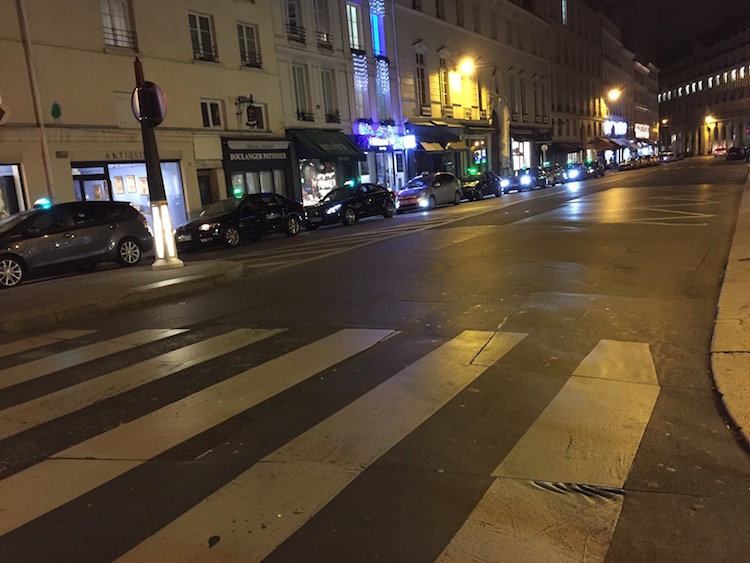 Sympathy for their plight, however, is limited. Until a decree in 2010 that loosened the rules for VTC, the taxi industry was a highly regulated monopoly. Taxi drivers did their best to keep it that way, especially since they have spent around €200,000 for a permit. Even today only 17,636 drivers are licensed, a number considerably inferior to the 25,000 in 1925. This means that there are only three licensed drivers for every 1000 citizens in Paris, compared to nine in London and 11 in New York. Before the arrival of Uber, this translated into: good luck finding a taxi when you really needed one. Competition has not stopped the drivers from charging you a lot to experience their frequent ill-humour, and many Parisians feel that the taxi drivers are finally getting their just desserts. Tourists apparently agree. In the 2012 hotels.com survey of urban taxis world-wide, they rated Paris a lowly 17th, and they too increasingly rely on VTC while visiting the city. 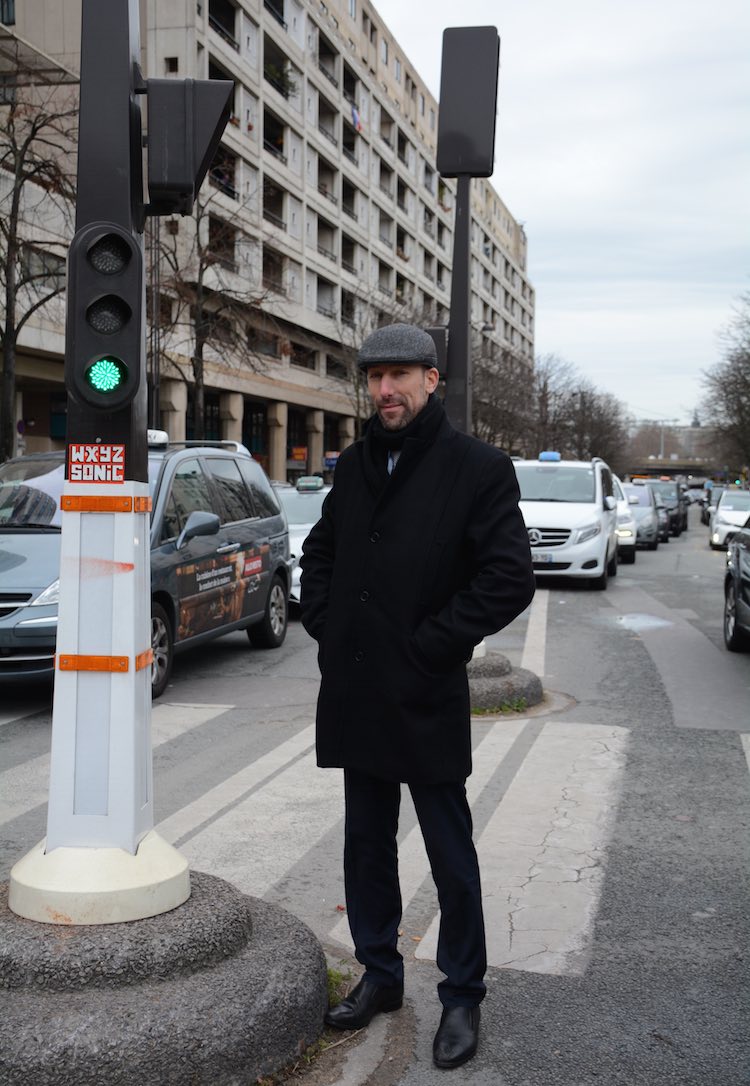 In the past, between the often violent blockades and the absence of back-up services, the government has always acquiesced to the drivers’ demands. I was interested to see if this time, with more people surely signing up for Uber the longer they strike, what would happen.

Meanwhile, I was reminded that the way change in fact often occurs in France, is through “la petite porte”, or the back door, as my friend Patrick W. once put it to me. It’s the way employers, for example, should be able to get around the strict labour laws to create jobs. On that front, forget it: I read this morning that the number of unemployed in France has grown by a whopping 668,000 since the election of President Hollande in 2012. So much for his campaign promises.

But it does hold true for urban architecture. Minus lucrative projects in the skirts of the Eiffel Tower*, construction mostly occurs at the edges of the city. La Défense, the business district to the west that I wrote about several months ago (GHOST_URL/modern-facades/), is a good example.

Another is the area around the Bibliothèque nationale de France (BnF) in the 13th arrondissement, where on Wednesday I met my friend Deborah F. for lunch. Over the last fifteen years, the quartier has been transformed from an industrial wasteland 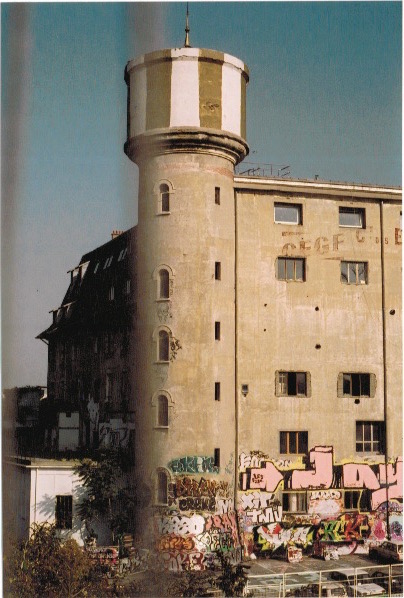 into a futuristic cityscape. When I got out of the métro, I could not even get my bearings and might still be wandering its space-age streets, if not for the odd familiar landmark to help me find my way. 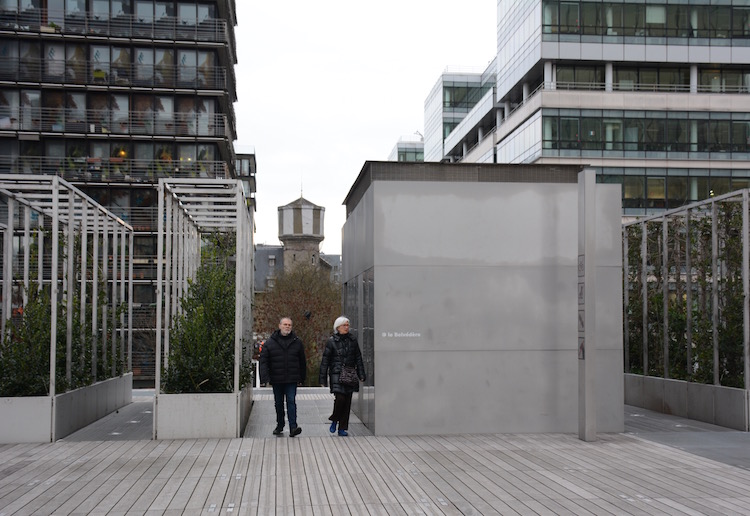 After lunch in a surprisingly old-fashioned café-restaurant filled with local workers eating the plat du jour and paying with their tickets restaurants, we toured of the Anslem Kiefer exhibition ‘l’alchimie du livre’ at the BnF. It was edgy, spectacular and far from the madding crowds of the centrally located Beaubourg, where a bigger Kiefer retrospective is currently on show. 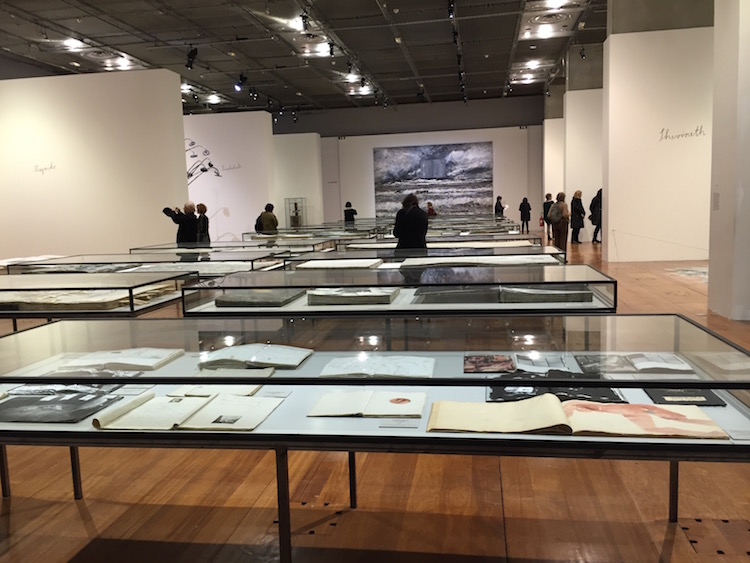 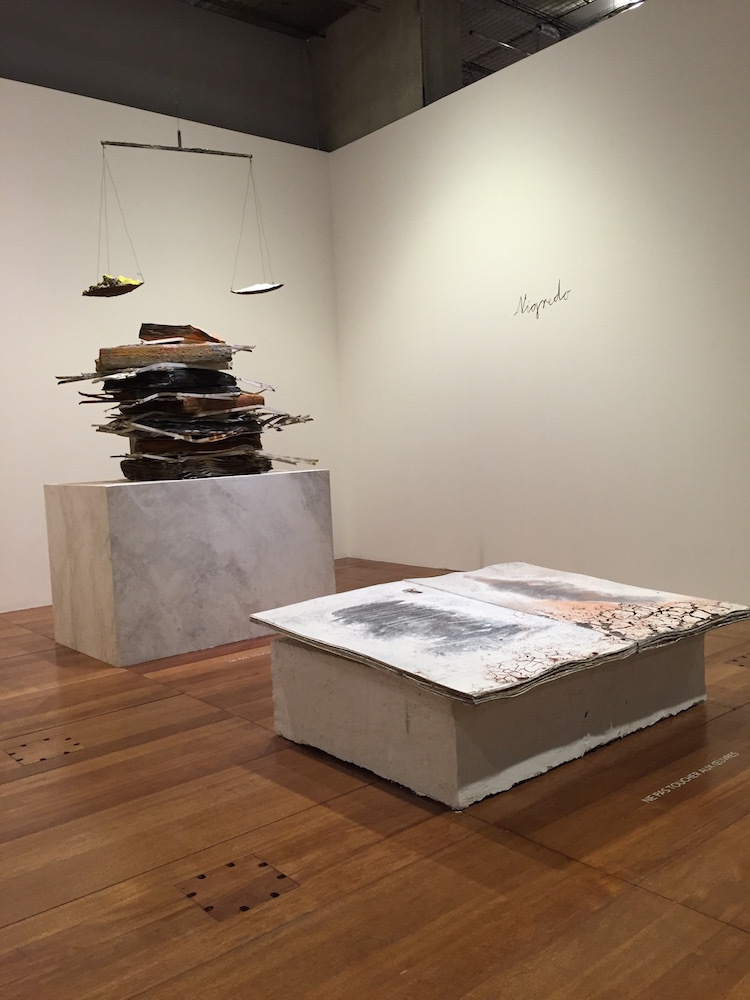 On the way home, I jumped off after one stop on the driverless number 14 métro line to see if the taxi drivers were still demonstrating outside the Ministry of Finance. Indeed they were, setting off petards and chanting for the minister to resign. Their cars were blocking the roads. 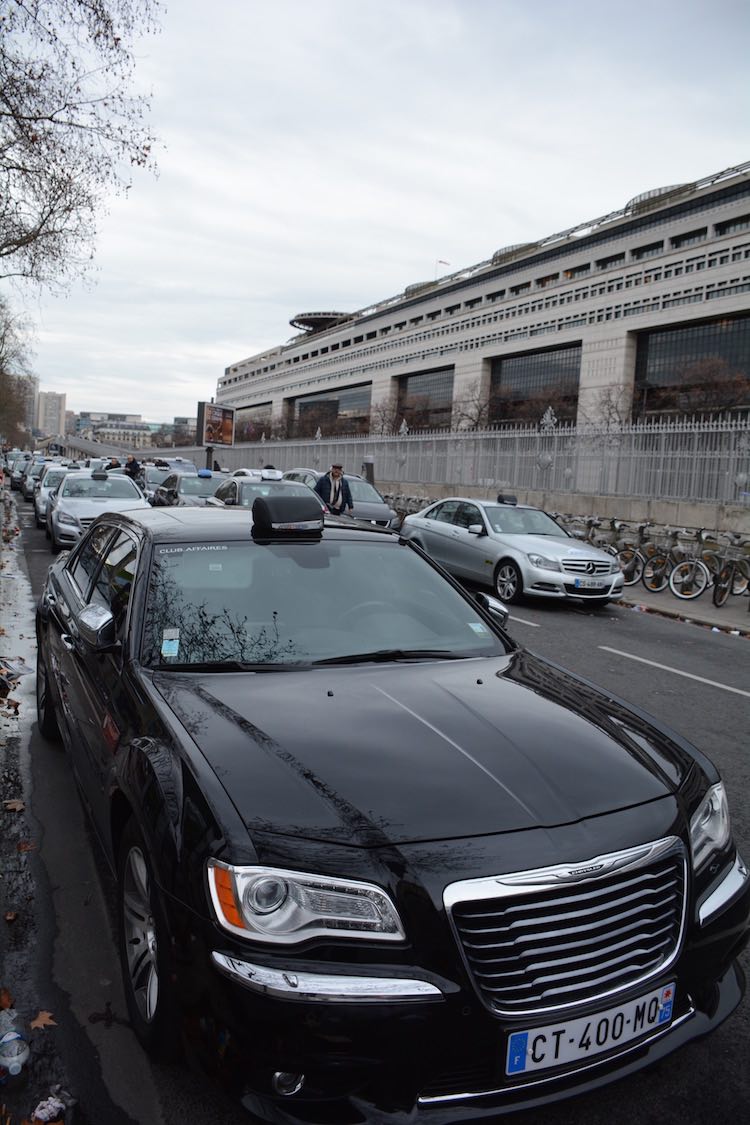 Their loud presence did not, however, deter work at the construction site right in the middle of the demonstration. Look closely and you can see that the digger digs on. 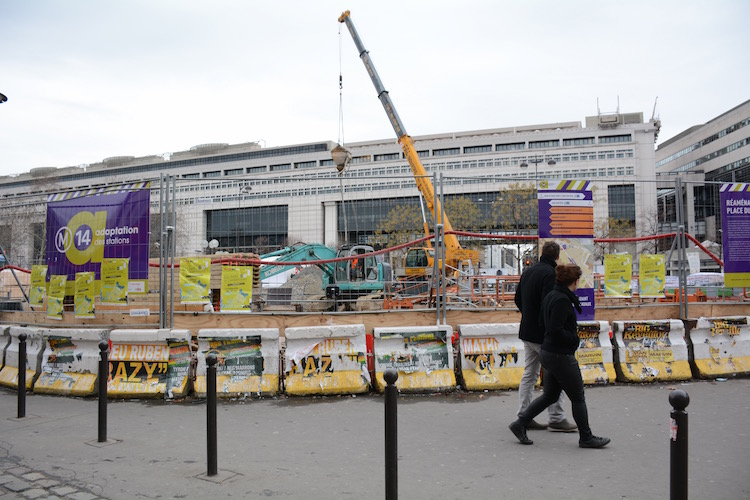 This evening I read in Le Monde what I suspected after witnessing the following late afternoon: 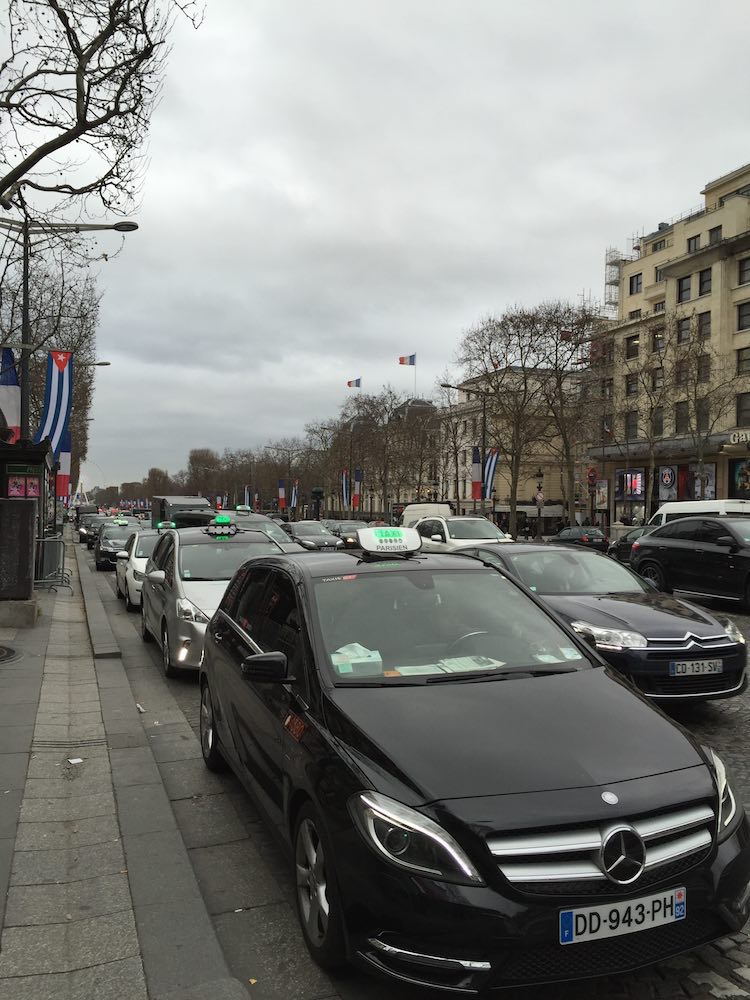 The taxis won again; the government agrees VTC present une concurrence déloyale (it may sound like a moral offence but just means unfair competition) and must be checked. Another chapter in the révolution à la française comes to an end.

Or a sub-chapter. Stay tuned.

*Apologies to email readers. In the last entry, I forgot to reduce the size of the Russian Orthodox church construction site photo and it distorted the whole post. Given the enormity of the garish project, perhaps a Freudian slip.