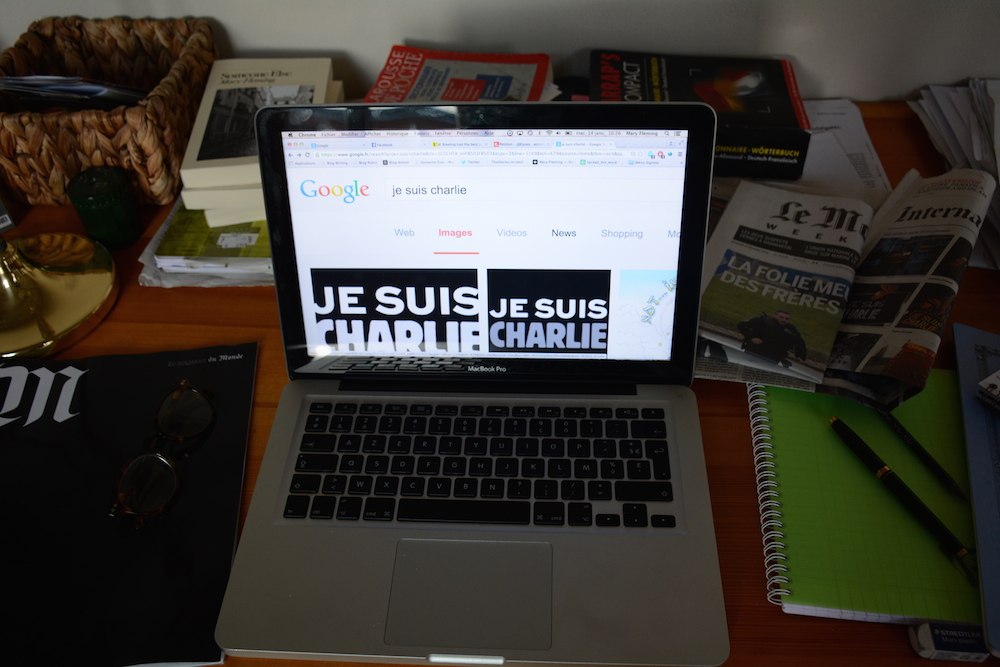 It's been a rough week for the world. In Paris, I sat in front of the television feeling as if I had received a physical blow to the head from a cold, metal object, causing a bruise.

Le Monde headlined its Friday paper "Le 11-septembre français" and though one could argue about the accuracy of this statement, the terrorist attacks at Charlie Hebdo and on the police in Montrouge and the subsequent manhunt and hostage taking in a kosher supermarket did feel monumental. Like September 11th, there is a before and an after. One listens to a siren with a different ear.

I was unhappy to be on a train to Berlin on Sunday; not being in Paris for the march felt like a kind of abandonment. And I was worried that last week's events might already be yesterday's news here in Germany. Unfounded: there is still a lot of coverage on the television and radio and the Germans themselves seem almost as affected as the French, a reminder that these two countries share much history. Yesterday evening there was an event at the Brandenburg Gate, with members of the government and religious leaders of all stripes on the raised platform. Unter den Linden was a sea of people. President Gauck, in a particlularly measured and moving speech, said: "We are all Germany."

Last night, back in our gemütlich Kreuzberg Italian restaurant, David and I were wondering why the international reaction has seemed, anyway, so much stronger this time than it was after the 2004 and 2005 bombings in Madrid and London, where more people were actually killed.

Partly too because it's once again time to heed Yeats' words in The Second Coming. Especially these lines, which come to mind with ever greater frequency:

Things fall apart; the centre cannot hold;
Mere anarchy is loosed upon the world,
The blood-dimmed tide is loosed and everywhere
The ceremony of innocence is drowned;
The best lack all conviction, while the worst
Are full of passionate intensity.

What to do about al-Qaeda and its attraction for young Europeans, much less about ISIS, which no one had ever heard of before 2014?

What to do about the far right parties, leaping and bounding their way up the polls in almost every European country, most notably in France, where the Front National came first in the last European elections and its leader Marine Le Pen appears as a presidential favourite. Or in Germany, where the 'anti-Islamisation' Pegida supporters gather with greater force every week in Dresden (in a region where the immigrant community is a weeny 1%!).

The outpouring of shock and sympathy following last week's tragic events in Paris is a rousing call from and for the centre. Let's hope it holds.