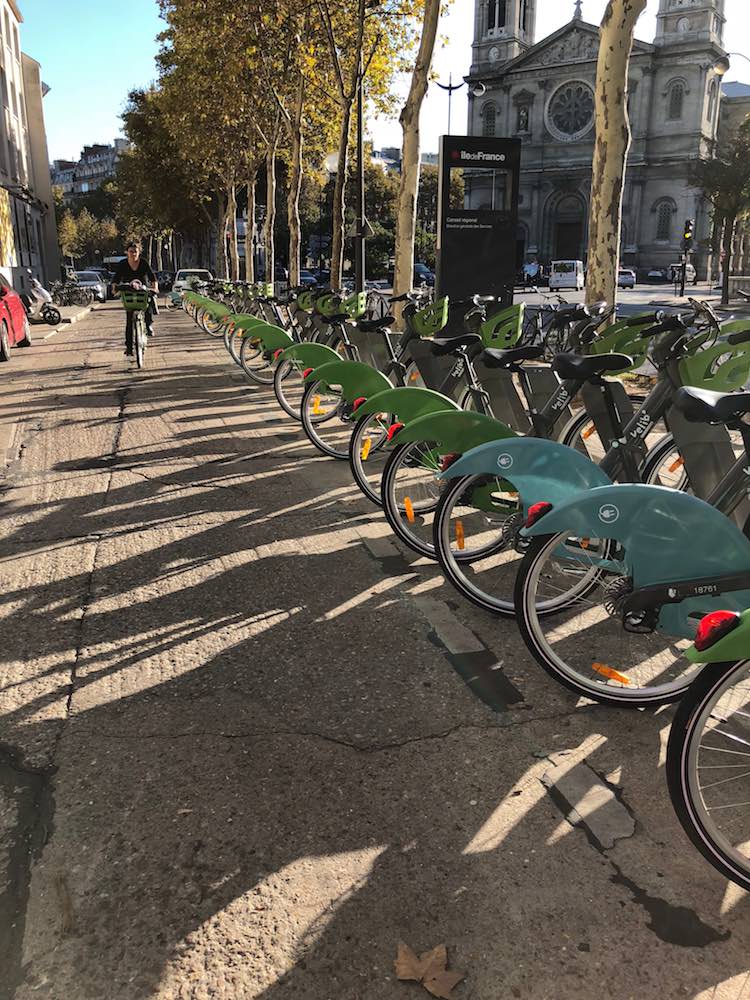 Paris is under siege. It often is in September-October. The traffic is terrible. Disgruntled workers, back from a month’s holiday, start striking and demonstrating and generally adding to the chaos. This year, however, though there have been a few rather perfunctory manifestations, the siege is of another nature. Instead of a transit strike it’s a transportation revolution.

It all started in 2007 when the bicycle-sharing service Vélib’ was introduced. The mayor’s office awarded a contract to the publicity firm JC Décaux to install electronic terminals every 300 metres (984 feet) around the city. Despite problems of damaged and vandalised cycles, Vélib’ quickly became almost as parisien as the proverbial baguette. Little did we know this was just the beginning.

Next there was Autolib', electric car-sharing (legal trouble has put a brake on their operations recently). Last year, when Décaux’s contract ran out and was not renewed, competition in the bike-sharing industry flourished. In came lime-green Gobee, autumn-orange Mobike, mellow-yellow Ofo. The Velib’ concession was given to Smovengo (who comes up with these names?) and their bright green or teal blue bikes, built like tanks, joined the ranks. 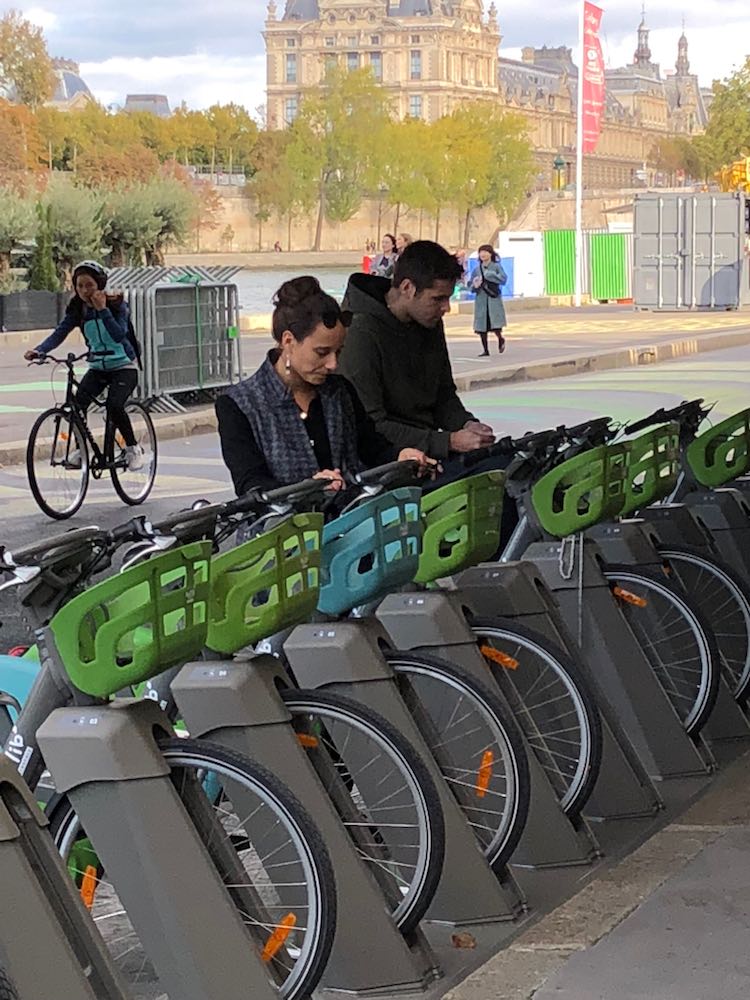 Meanwhile all sorts of battery-powered conveyances began appearing. These include Segways, usually with tourists aboard... 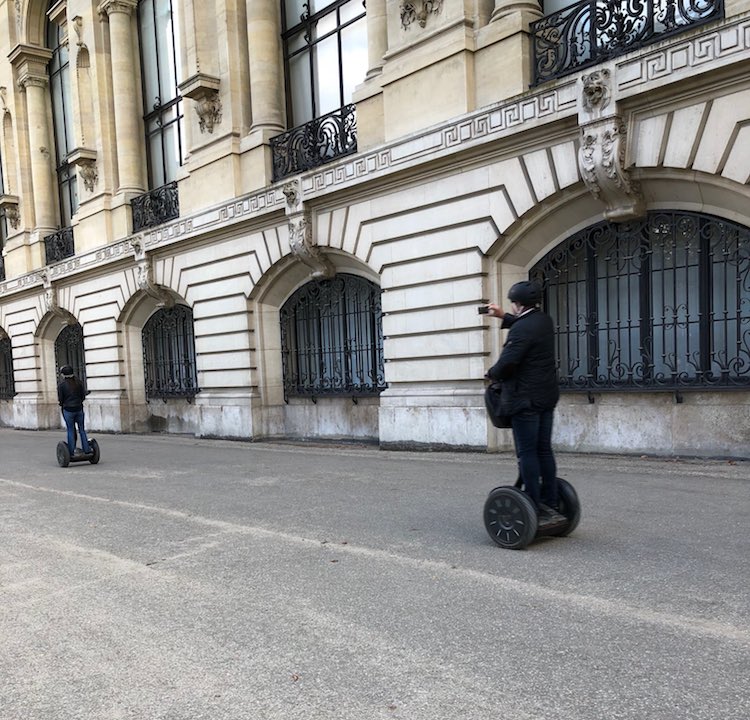 Segway Selfies, the way to go 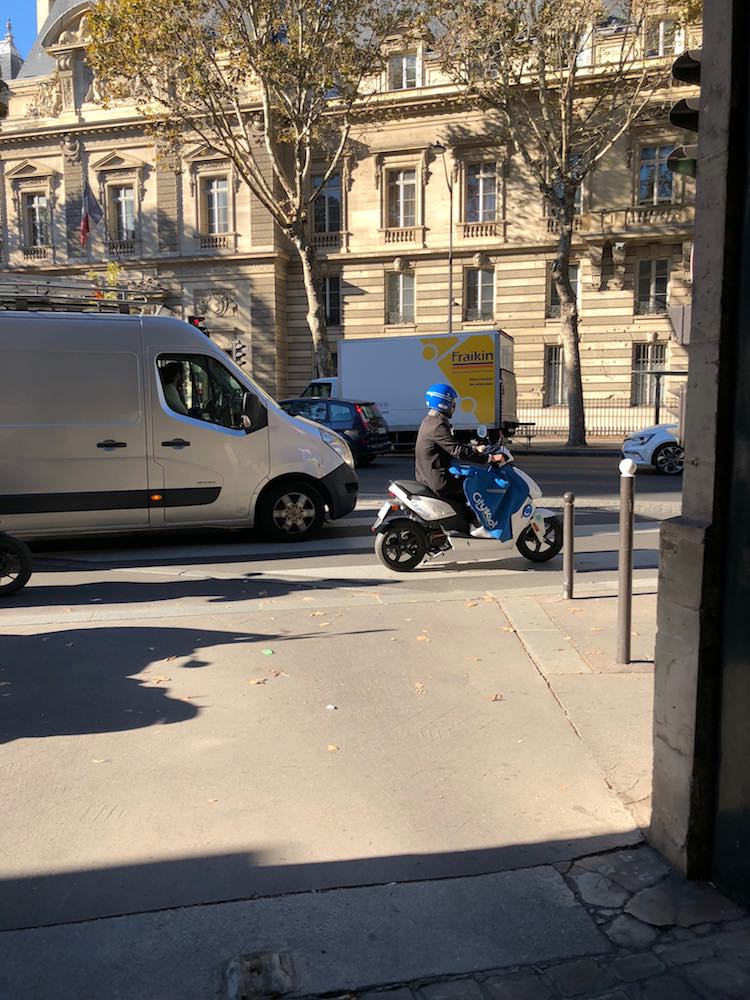 ...and one-wheeled contraptions called monocycles. You even see battery powered skateboards. But the real game changer has been the new sharing system for electric trottinettes. Since la rentrée these motorised toys, which come in three brands (Lime, Bird and Bolt), are ubiquitous. 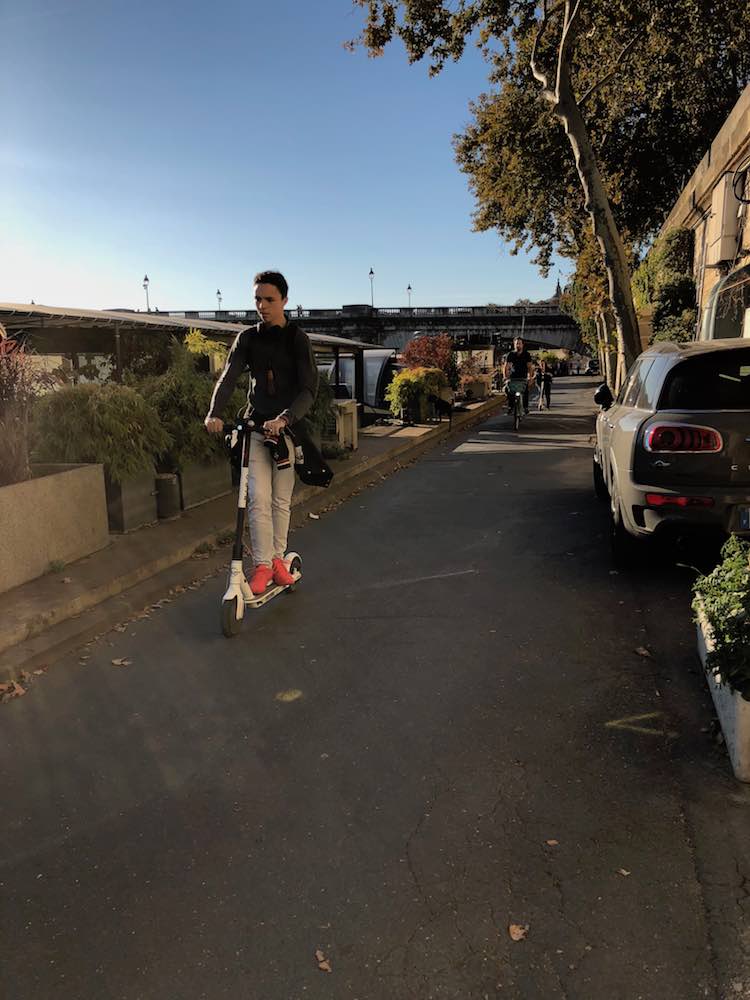 Despite always having had my own bicycle, I was delighted when Vélib’ were introduced. Though bike-sharing might not appeal to inveterate car users, it would, I reasoned, attract the young. Paris would never be Amsterdam but it might develop a generation of cyclists who would shun cars even as they aged. Surely these new riders, I said to myself, will eventually learn some cycling etiquette and adopt better road habits.

By this logic I should be loudly applauding Vélib's descendents and cousins. In theory I am. But the reality is more complicated. Unfortunately for Paris there are les Parisiens. And the average Parisien is by nature a very undisciplined being. Vélib’ cyclists, even those who eventually bought their own bikes, did not learn to ride with other people in mind. Or to use the hugely expanded bike lane system when the sidewalk or the park was more convenient. Or to stop at red lights when pedestrians are crossing the street. 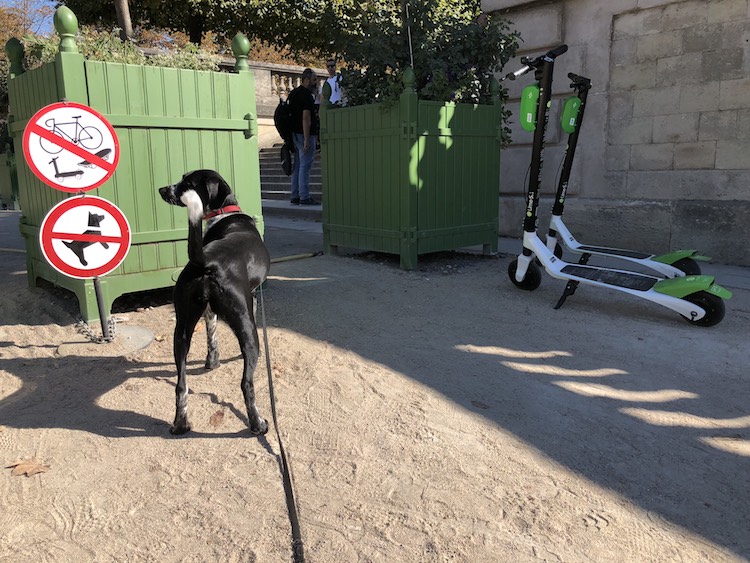 'Hey, neither the vehicles nor the signs were here a month ago.' 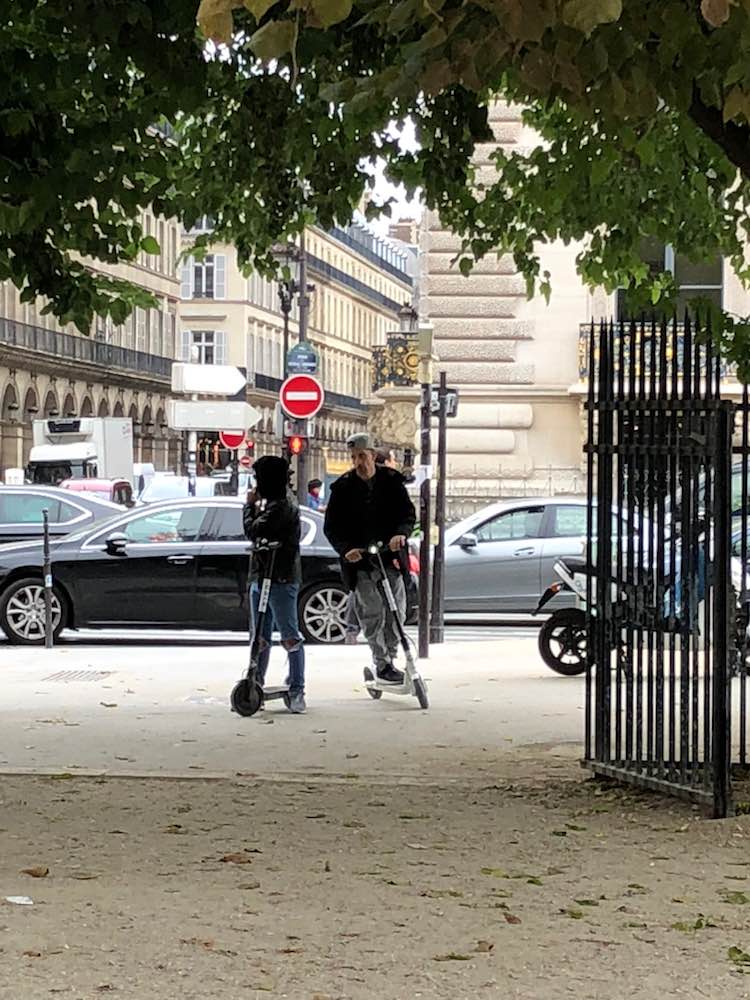 Now, with the trottinettes, people have thrown all semblance of road rules to the wind. Maybe because they recall childhood, people ride them as if they really were toys, which means going anywhere they please and treating pedestrians, who cannot even hear these electrically powered menaces coming up behind them, like slalom poles. But any vehicle that can cruise at up to 30km/h (16mph) is not a plaything. 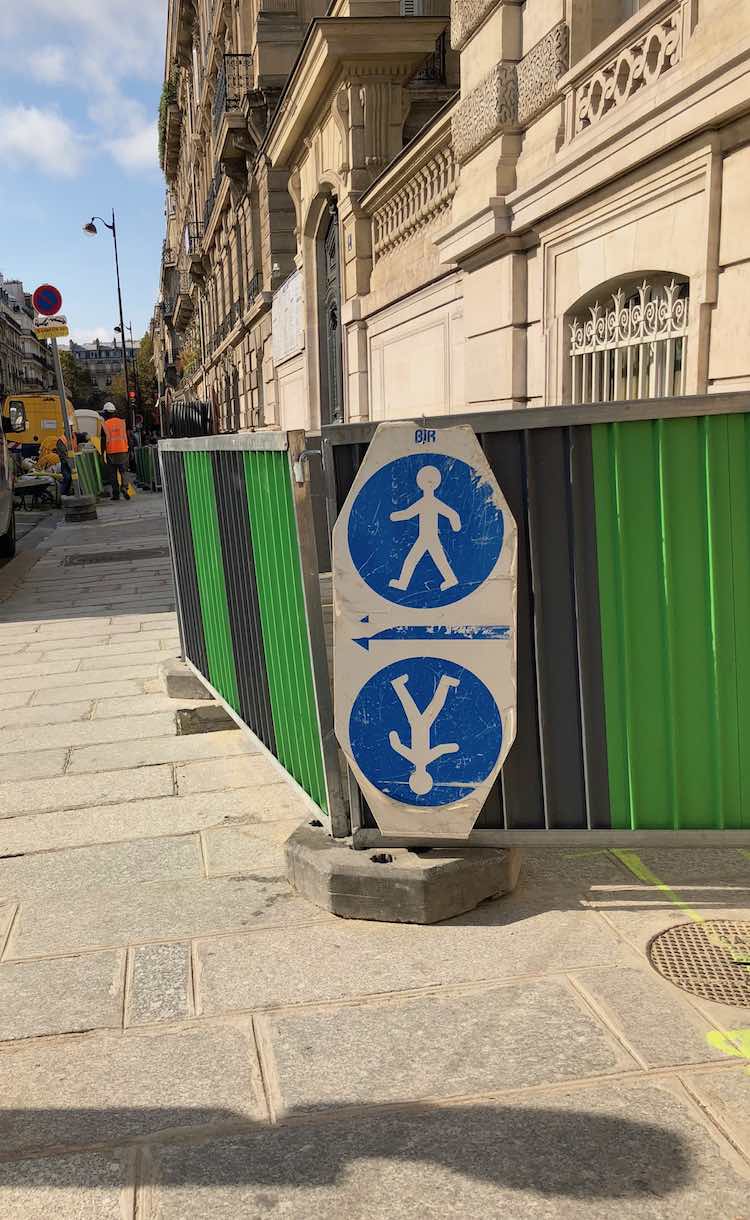 The other problem with all the new bike and trottinette sharing schemes is that there are no terminals; they are programmed to be left and re-shared anywhere. And sadly les Parisiens are not only undisciplined. They are also, as my neighbour Martine E pointed out, je-m’en-foutistes (I-don’t-give-a-damn-ers). This means they leave their used vehicles any and everywhere, regardless of whom or what they might be obstructing. 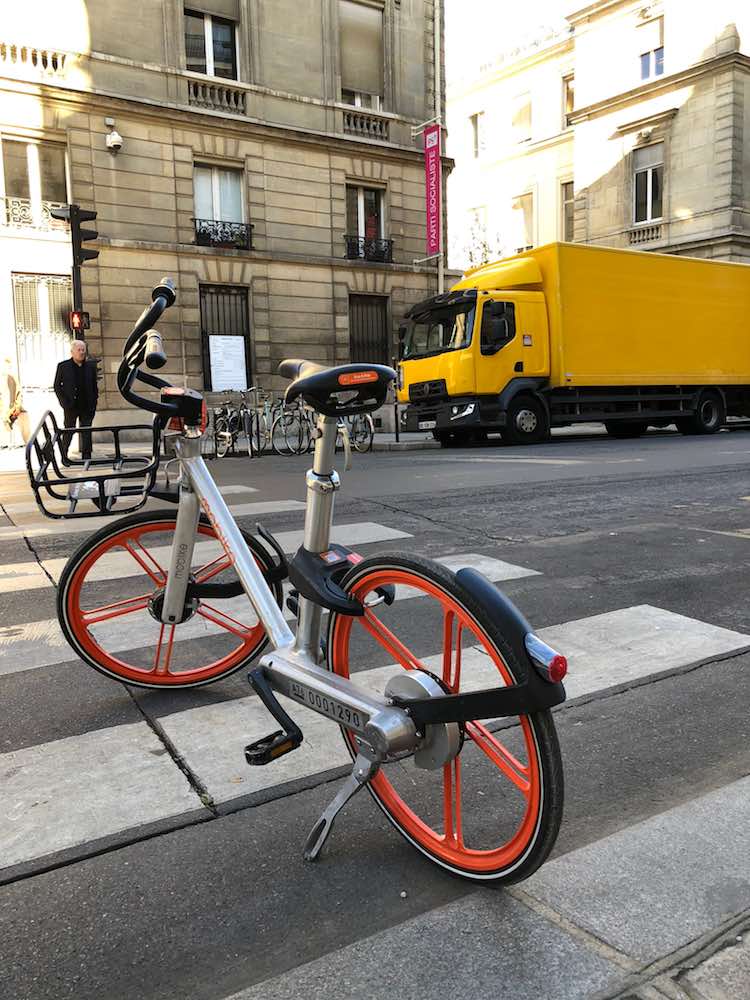 They begin to look like litter and in fact are often treated as such. 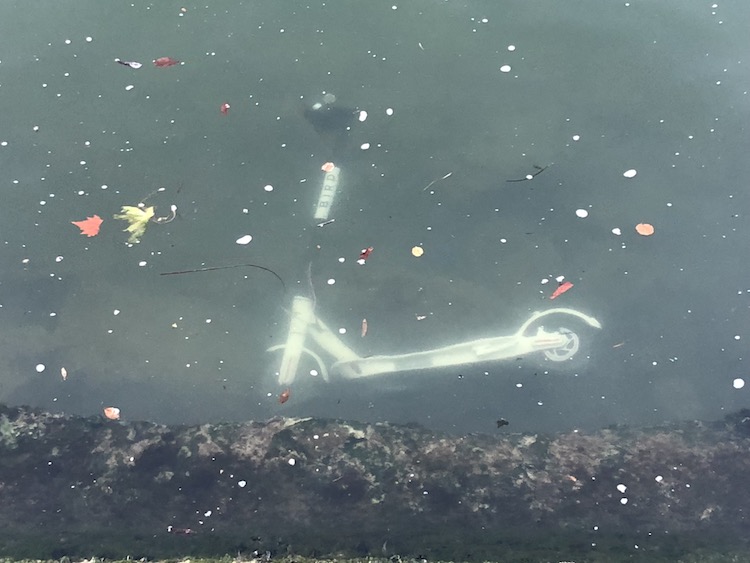 The Chinese firm Gobee.bike couldn't take it and gave up after a few months, saying: “the mass destruction of our fleet has become the new entertainment of underaged individuals.”

Furthermore, constructed to carry one passenger, the share-system vehicles can often be seen carrying two. The bikes have adapted by making extra strong baskets but the trottinette makers did not take note. The lovebirds on board sail along like Leonardo di Caprio and Kate Winslet on the prow of the Titanic… 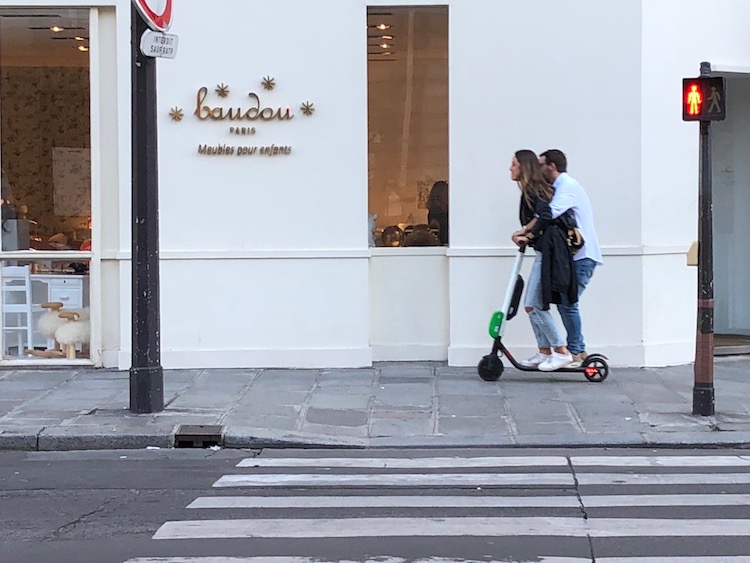 ...with the trottinette about to suffer a similar fate. 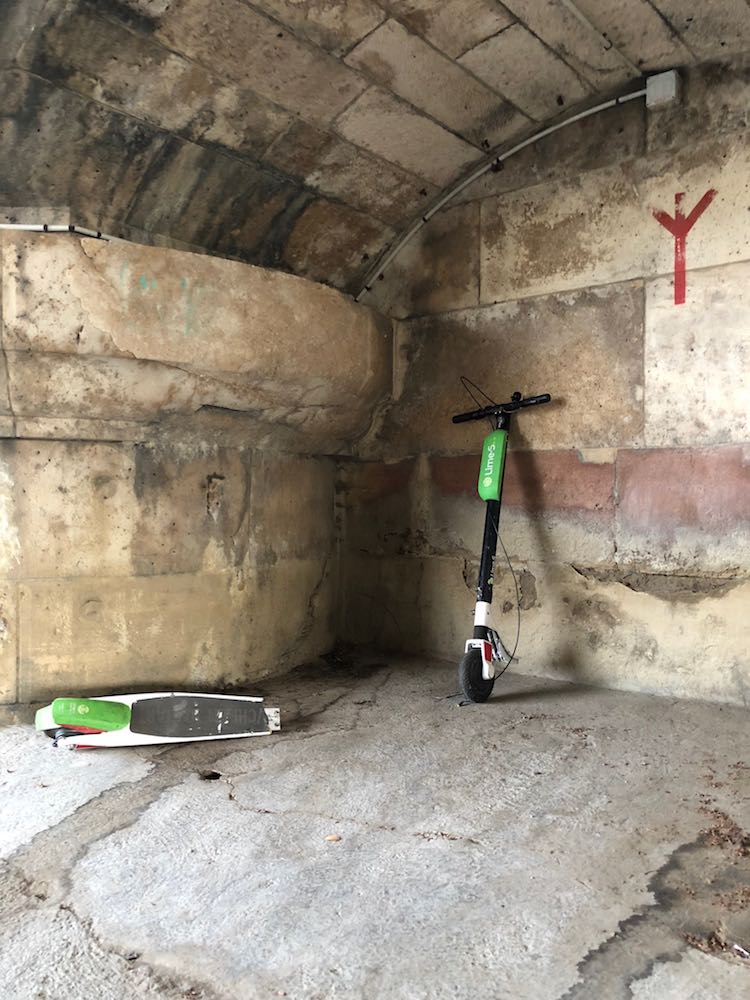 All of this has made me think about the concept of sharing. To me it implies collectivity, a system of common goods, treated with respect by one and all. Because we all occupy the same urban space, sharing also suggests an underpinning of civility. But the proliferation of conveyances in Paris has encouraged the opposite attitude. In fact since the introduction of trottinettes, even the bikers behave less civically and courteously. For the moment all these sharing schemes seem to have resulted in is more, not less, moi-je (me, me, me). What a shame.