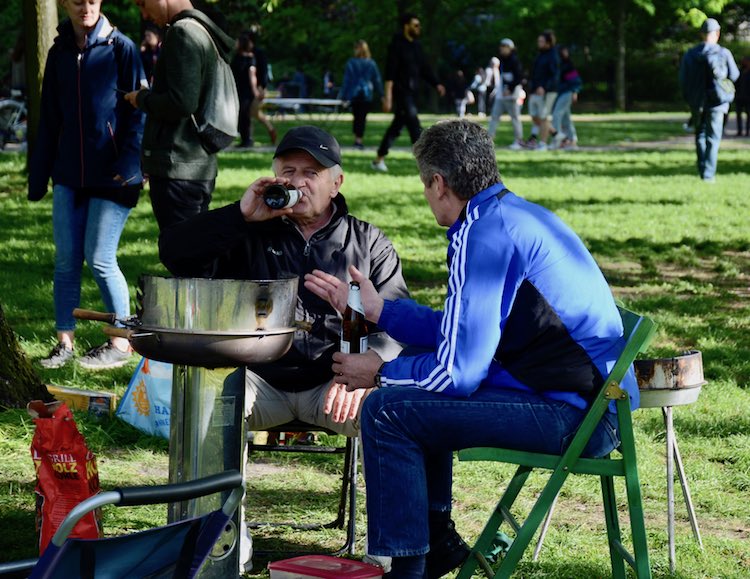 As the US prepares to celebrate 242 years of Independence, some citizens may be buying their charcoal with a certain feeling of superiority or at least a belief in their singularity. Barbecuing, says a Time magazine article, “is about as red, white and blue as American cuisine gets.” Or, as the more provocative Guardian argues: it “is a form of cultural power and is intensely political, with a culture of rules like no other American culinary tradition.”

The origins of the word barbecue remain uncertain. Many believe it comes from barbacoa, which is how the Spanish settlers described the Caribbean way of slow-cooking meat over a wooden frame. But some claim the designation stems from the French, barbe-à-queue, beard-to-tail, because every part of the beast could be grilled. In any case the practice appears to have been developed by some combination of colonisers and colonised, or as The Guardian puts it: "by enslaved Africans with inspiration and contributions from Native Americans struggling to maintain their independence" from the Europeans who added their own pinch of salt to the technique as well. By this measure it's been insurmountably political forever.

What is certain is that by the 19th century barbecuing was widespread in the US south. By the 20th, to some degree thanks to those former slaves who brought their cuisine with them when they moved north and west, it had made its way to every suburban garden across the country.

Given its pre-eminent place in the national psyche, the barbecue can perhaps make Americans forget that the phenomenon of cooking food over charcoal for a group of friends and family occurs all over the world. Think Japan, Korea and Argentina, for example. Here in Germany it has its own variant, die Grillparty. The word comes from English and French (grill deriving from griller) and the practice may have existed here in its own right before the United States came into being or it may have been introduced by American GIs in the late 40s. Too bad if it took a war to get barbecuing over here but whatever the origins the Germans now grill with a vengeance. It is close to a national obsession. At the first hint of warm weather, shops begin selling everything from charcoal 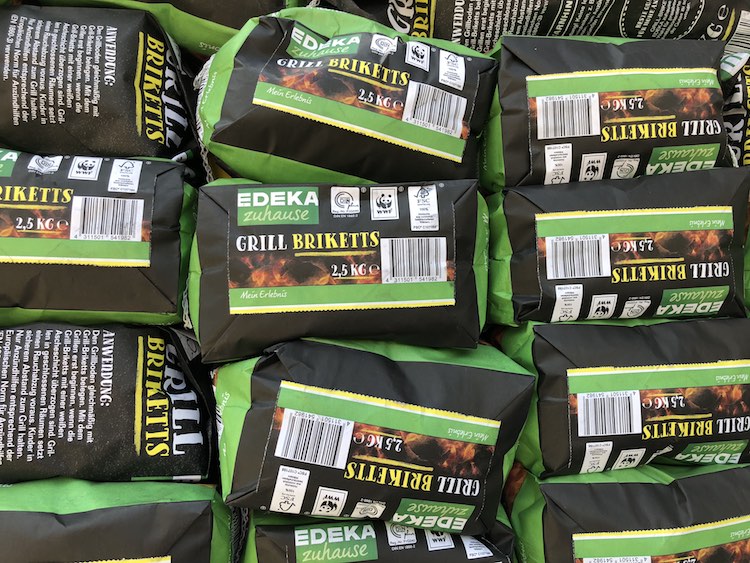 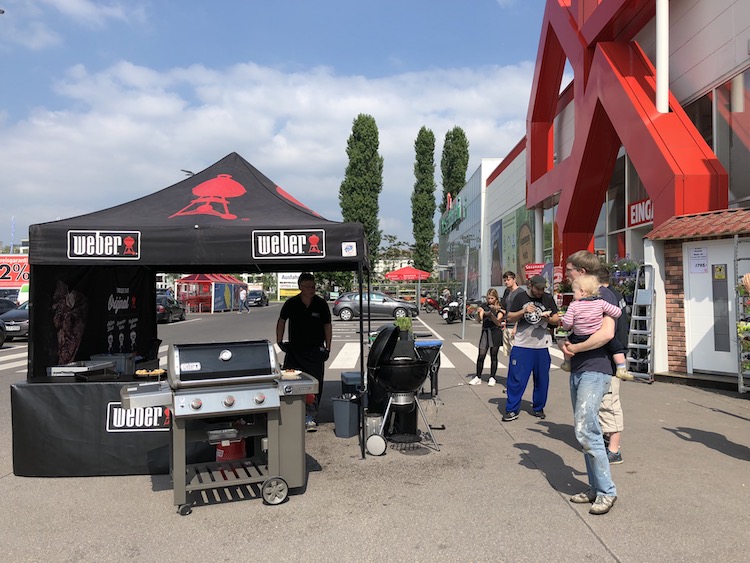 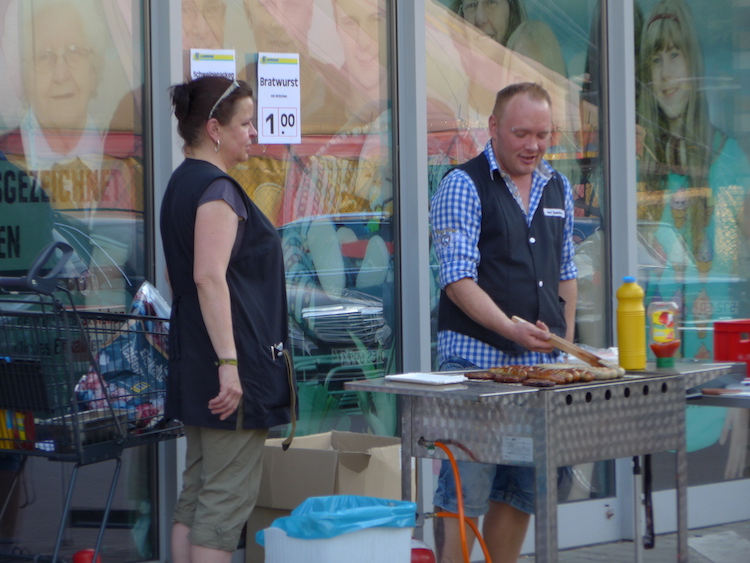 The grill can be any size, to fit any occasion. There are the gargantuan, suburban-type Webers you see above but there are also a variety of disposable grills, some nothing more than a aluminium dish with charcoal inside and a wire mesh on top. 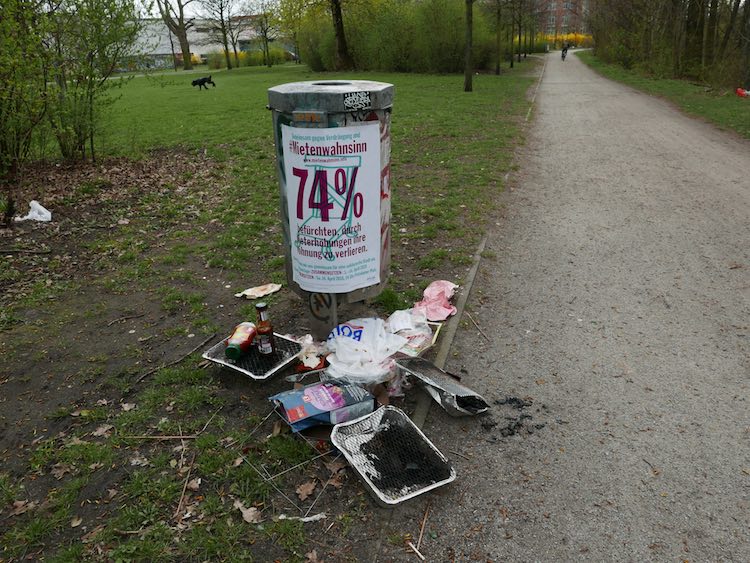 As with everything in Germany, where one can grill is regulated. As with many things in Berlin, the rule is frequently ignored. 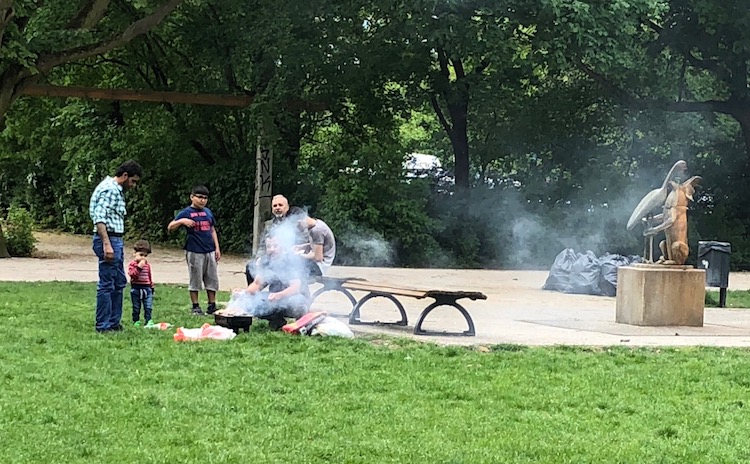 A no-no in Treptower Park 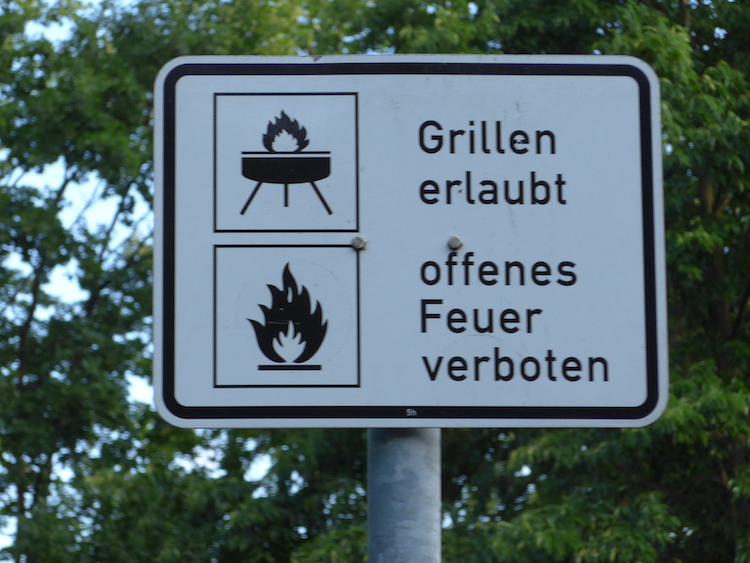 A-Okay in the Schlesischer Busch

The Schlesischer Busch is right around the corner from where we live and is considered one of the top ten grilling spots in the city. Though it comes number seven on the list, it would win top spot if irony were factored into the equation: this 9.2 hectare (23 acre) park was once a Todesstreifen (death strip) between east and west. 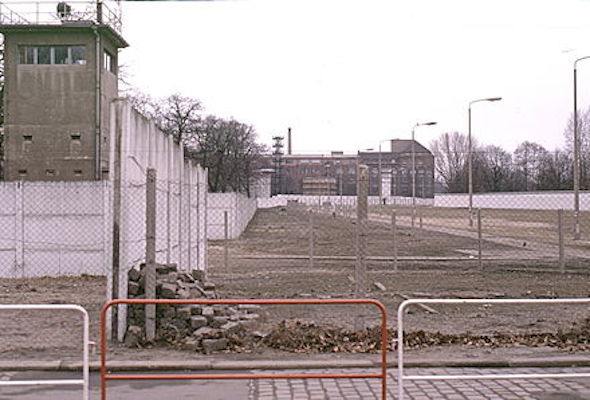 The erstwhile watchtower (left in the above photo) still dominates the space. 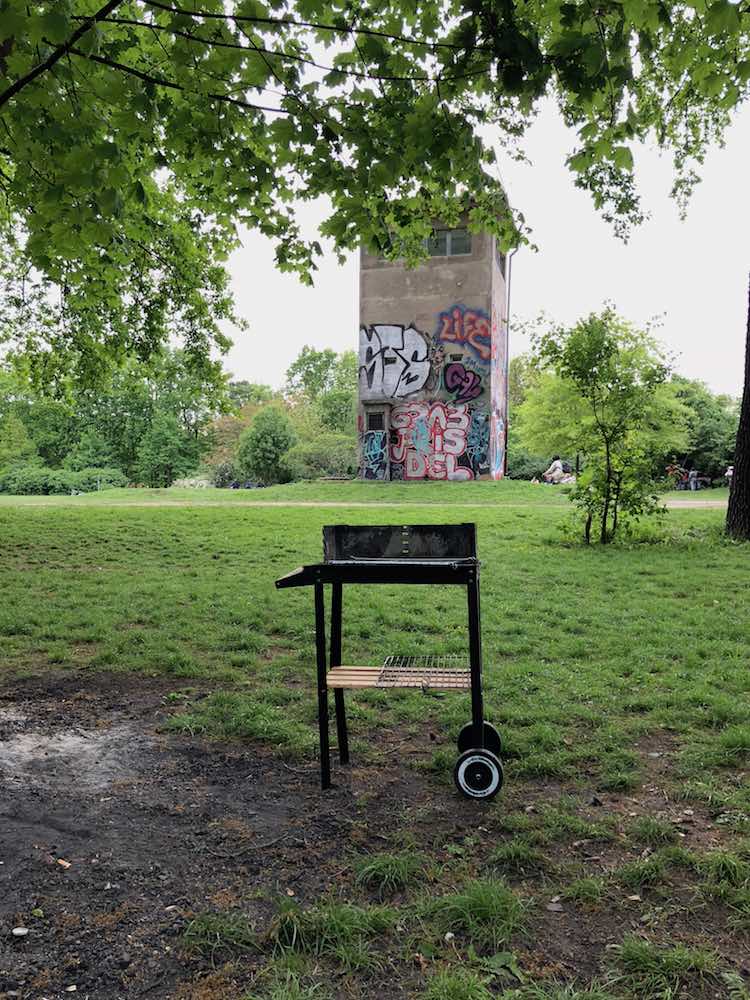 One Saturday afternoon a few years ago I happened by there when it was open to visitors and I got a look from the other side of the mirror, so to speak. 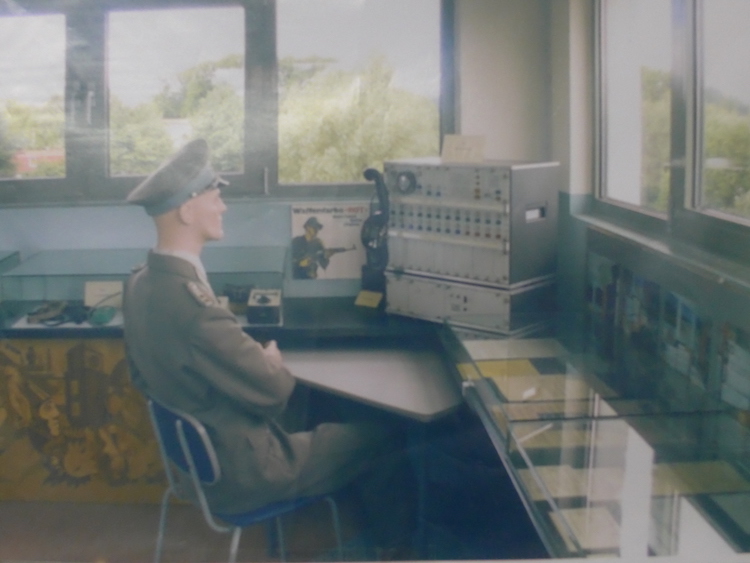 What must this guard be thinking? 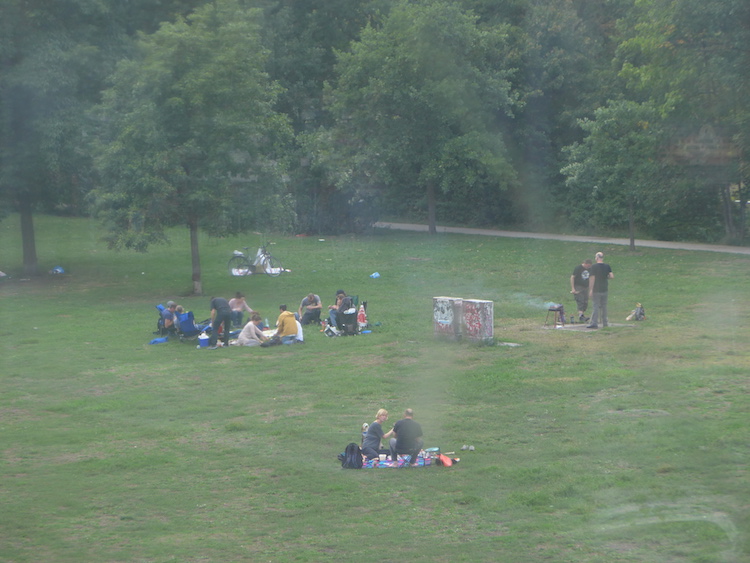 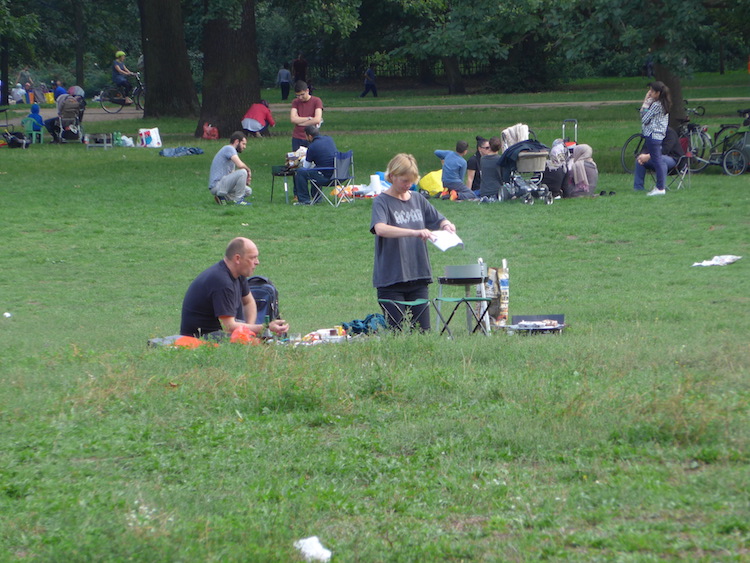 Actually situated in Alt-Treptow, the park is just across the canal from Kreuzberg, home to a large Turkish community, and the Turks are big Grillparty-ers too.

To my mind they are the experts, often arriving with carloads of victuals and equipment, including sophisticated grills and long tables with tablecloths. The food they are grilling is also undoubtedly far tastier than whatever the average German has sizzling.

No matter who is doing the cooking, however, the aftermath of a Grillparty in Berlin is often not a pretty sight. 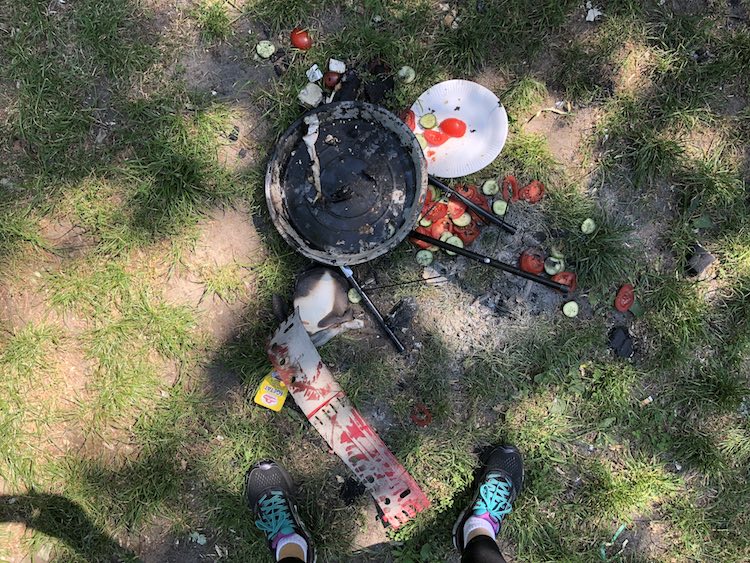 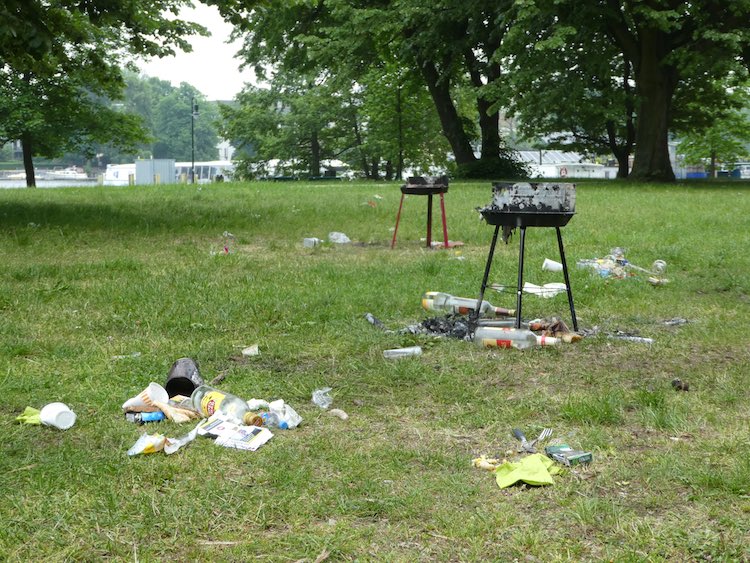 Unfortunately rubbish is another speciality of the city.

But the point about barbecuing is that like many phenomena it has developed from a multitude of sources and cultures and now has its own variations across the planet. Nothing can exist for long in a bubble. I find this a comfort and I am hoping that a lot of other Americans, as they light up the charcoal next week, do too.