For a long time I've known that the section of the VII arrondissement of Paris where we live was originally a swamp. Yesterday I learned that it was also an area where wood that travelled down the Seine was stocked. Such a place is called un chantier, a word that today is more commonly associated with 'work site', such as the kind that seems to follow (one might even say haunt) us from Berlin to Paris to the Perche and back to Paris again.

Construction intended for human life in our quartier began when the river was channelled and cleaned up in the 17th century. First came some abbeys and convents. Then in 1670, Louis XIV built the military hospital les Invalides, which today is still in part occupied by officers (though not sick ones) and is also home to Napoleon’s tomb and the Museum of the Army.

Nobles, feeling crowded and bored in the Marais, began building hôtels particuliers (grand townhouses) amidst the vineyards, vegetable patches and fens. The hôtel in the cluster of buildings that constitutes our address (top photo) was constructed in about 1730, just before the Plan de Turgot was drawn and situated beyond the map's top right hand corner. Along with its fraternal twin next door (an early experiment, you could say, in semi-detached living), it was built on spec as rental housing by a wood merchant turned developer. The house is about 1000m2/10,000 square ft. The property included a courtyard, stables for 19 horses, shelter for four carriages and a back garden that extended to the next street.

In the 19th century, when the boulevard Saint Germain nosed its way through the quartier during Baron Haussmann’s remake of the city, the property got squeezed. Stables and carriage houses were built upon and transformed into the apartment building that now gives onto the street and whose porte-cochère (see photo below) leads to the courtyard.

The hôtel further lost its elbow room when our building was tucked in at its side in 1930; the ensemble actually offers a tidy snapshot of Paris architectural history over three centuries.

Our living room (left building) is on the boulevard but we enter the building through the courtyard and our dining room looks out onto it. The rest of the flat extends back, parallel to the hôtel and its garden, with a view of a lovely swathe of other Paris courtyards and rooftops.

As for the hôtel during all this construction, it was bought and sold among nobles past the Revolution and into the 20th century. In 1956 it was purchased by an association of Catholic women who continued to rent it out.

When we moved here in 1997, the tenants were the Institute for Simplification (since nothing's simple, it didn't last long), an elderly couple with grown children who visited often and a troubled man who had been born here, the only child of a collaborator in the French militia during the War and a police officer thereafter. By 2015, the couple had died and the troubled man edged out.

In 2019, the hôtel was sold. We, the residents of the two other buildings, were happy because it was going to be a family home. Potted trees would supplant the cars and parking spaces. Children skipping to school would replace lawyers and interior decorators (subsequent tenants to the Simplifiers) trudging to and from work. We may have blanched mildly at the magnitude, but it all seemed for a good cause.

The chantier began after Covid lockdowns in 2020. As previously reported, the entire structure was covered in scaffolding and white plastic. The roof was removed. Once the new roof was in place and the plastic gone, work began on the garden. Out went the existing vegetation and in came the new. A vehicle ‘the size of a TGV car’, according to my neighbour, arrived in our street, and an enormous crane transported two iron basins over the two buildings and the courtyard, into the garden.

It was about this time we heard that the Proprietor's personal circumstances, shall we say, had altered and so would plans for the hôtel. The top two floors would be office space. The basins in the garden were sawed into pieces (the noise, the noise!) and removed.

The plants were uprooted and many thrown away. Here's the state of the re-landscaping as I write:

Meanwhile, trenches were dug throughout the courtyard. Our front steps were removed and for months we had to cross a flimsy plank to enter.

Parking the car in the former carriage house, now our garage, has been difficult since the beginning...

...and impossible since late August.

Finally, about a month ago, re-cobbling of the courtyard began. We learned that instead of potted trees, there will again be parking places for cars, plus chargers for the electric variety.

Just days before the last cobbles were cemented in place, the Proprietor visited the chantier and found them too widely spaced.

Like the garden, it is currently being dug up and refitted.

For the last six months, we, the other residents, have complained, but we have little recourse beyond the frustration of feeling marginalised in our own homes.

Some days, I wonder if this isn't the hôtel particulier exacting vengeance after centuries of having its style cramped. Others, it just seems like a new chapter in the saga of a swamp. 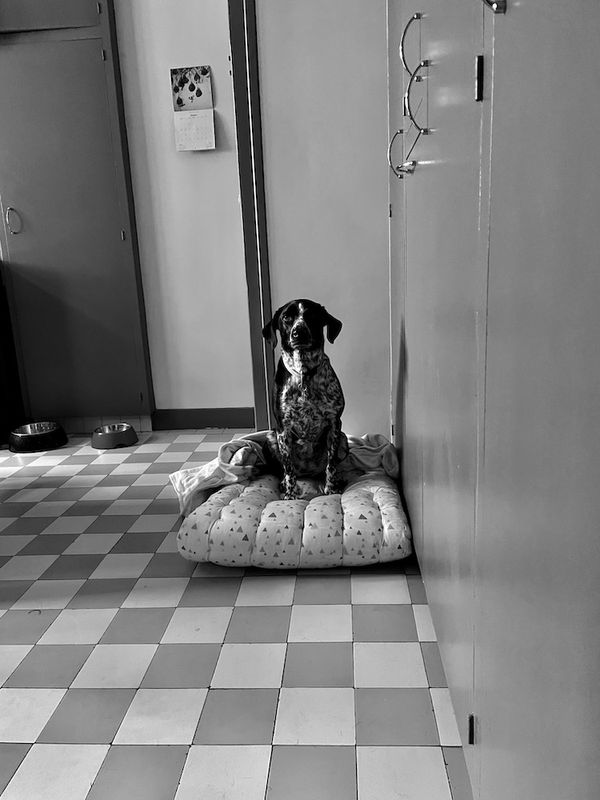 Friday, 14 October Every morning I do a stupid thing. After some work and before walking Tasha, I peek at the news in the The Guardian's newsletter that arrives in my email box. Yesterday the cover photo showed four soulful sea lion pups and the headline said: "The Age of

Friday, 30 September “What about the garden?” my husband David began asking two years ago, not long after the renovation of the inside of our Perche house got underway. As regular readers know, it has been a refrain ever since. For more recent readers, and since I have trouble keeping