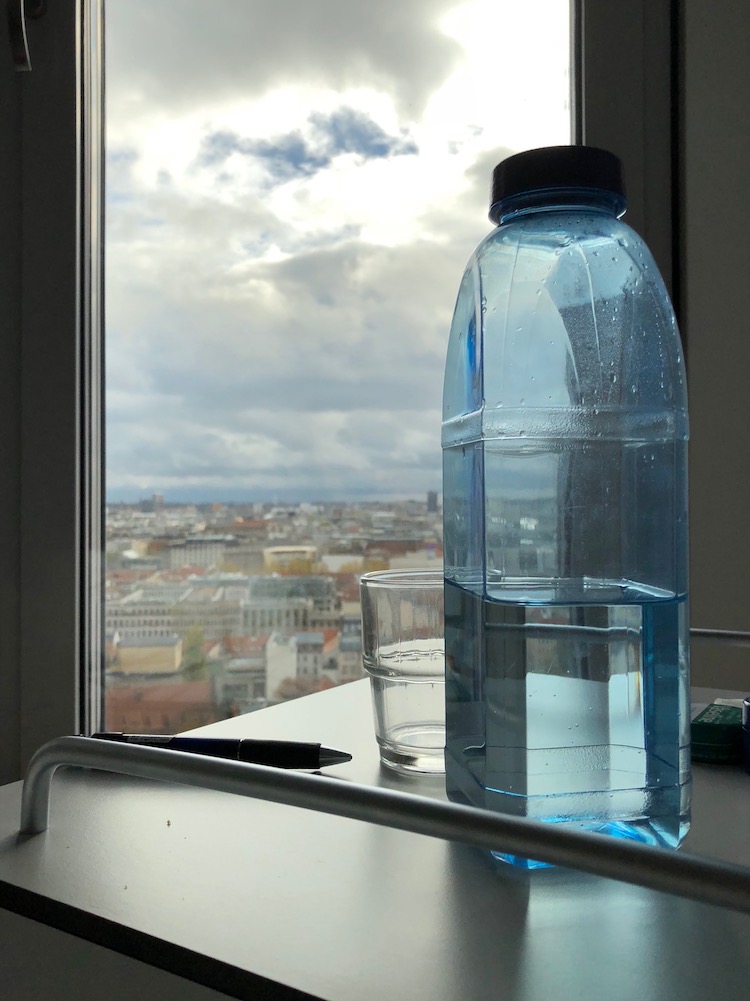 I am returning from an unexpected sabbatical. It started with nine days in Berlin’s Charité hospital. 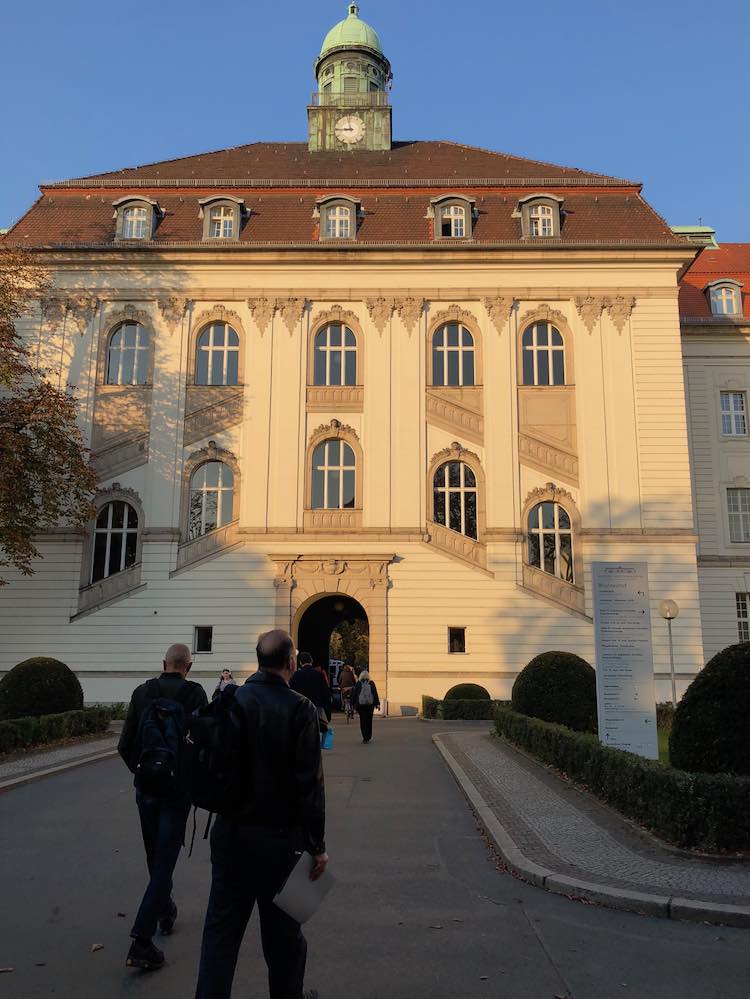 Oddly the notification came at another branch of the Charité complex, the heart hospital pictured above. Two days earlier David had been diagnosed with an atrial flutter, where the heart beats dangerously fast and needs to be reset with an electric shock. While waiting with him before his intervention, I was suddenly overwhelmed with a severe stomach ache and had to go home.

Too many excruciating hours later--waiting to hear from David, contemplating the slim odds of our being seriously ill simultaneously--I was on the way to the emergency room at the main branch of the Charité. 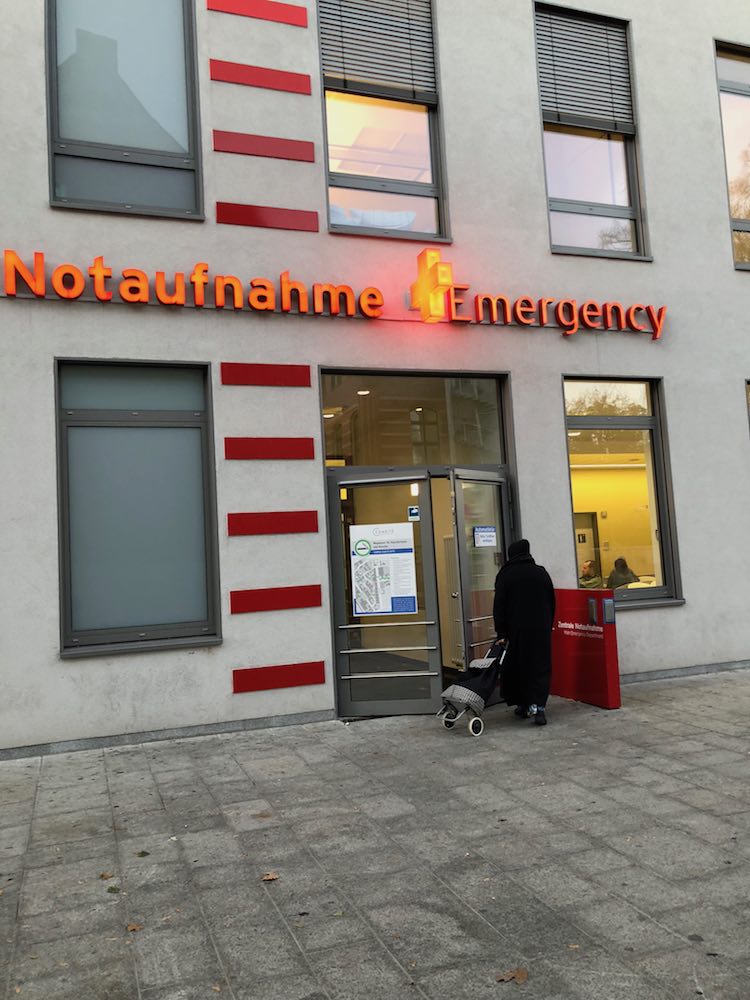 Once the agonizing wait there was over, I was quickly diagnosed with—take a deep breath before you chomp into this one—eine Bauchspeicheldrüseentzündung. In more digestible terms acute pancreatitis, a severe inflammation of the pancreas, usually caused by heavy alcohol intake or gallstones. It wasn’t the former and didn’t appear to be the latter but whatever the cause, I was immediately hooked up to an IV with very strong pain killers and a drip of water to help flush out the inflammation. To give you an idea: the normal lipase count (the measure of the enzyme that breaks down fat in your pancreas) is under 60. Mine was 9019.

So stretching the laws of probability, David and I spent that Wednesday night in two different branches of Charité, he in the Deutsches Herzzentrum in Wedding and I in the main complex in Mitte. Tasha, thankfully, was already at Anna's, since we were supposed to be leaving the next day for a lovely weekend in Tuscany with dear friends. What a Plan B. 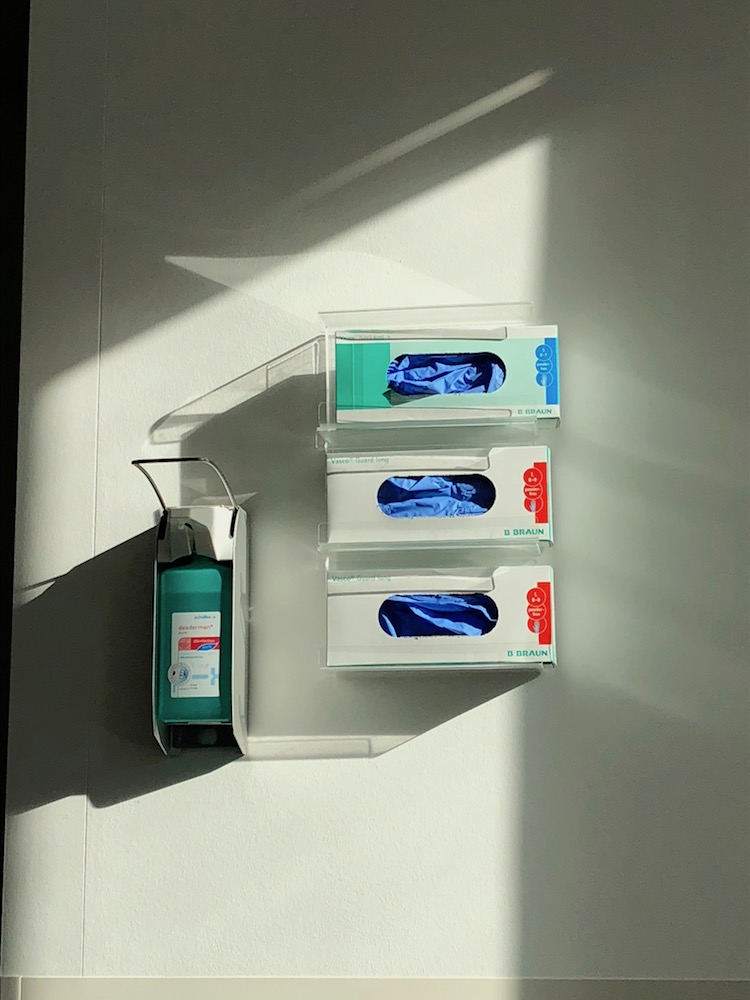 The Charité is a very old hospital. Frederick I of Prussia had it built in 1710 in expectation of the bubonic plague epidemic that never actually made it to Berlin. By 1727 it had become a hospital for the poor, thus its name Charité. Later it became a teaching hospital and by the early 20th century a centre for Germany’s best medical and scientific minds. Many of them were Jewish and no need to spell out their fate under the Nazis. Post-war Charité landed in the East of the divided city and it was in the GDR period that the tower in which I was residing was built. After a 2016 renovation it now looks brand new. Today Charité, Europe’s largest university hospital, appears to be re-establishing its former glory. 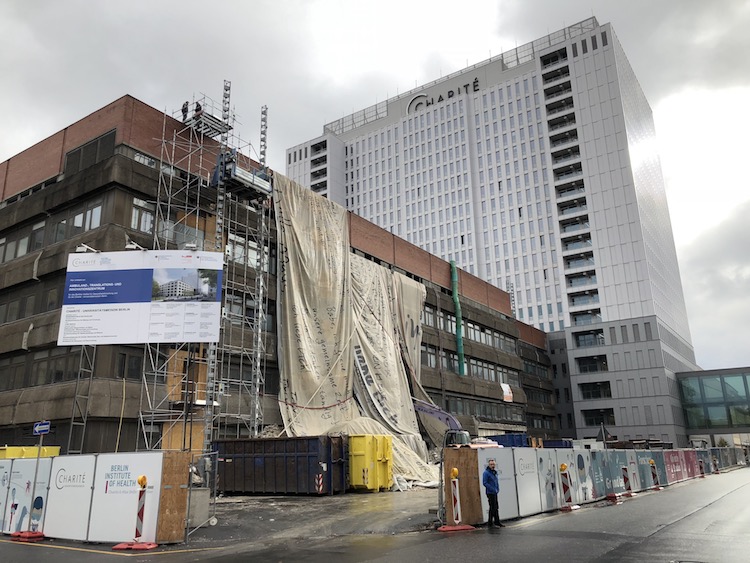 Now for the back side

Under the influence of those opioid pain killers, the first four days of my stay are a bit of a haze. I would wake to the sounds of my roommate’s bustlings or the nurse or the doctor or David, then fall back asleep again. Having been told "exercise" was good, I would occasionally haul myself out of bed and forge down the corridor, right hand on my IV pole, left clutching the gap at the back of my hospital gown. One of the nurses finally said: "Frau Flay-ming, can't someone bring you some of your own clothes?"

By Sunday morning the intravenous pain medication was stopped and I began to emerge from my fog, take in the world around me. 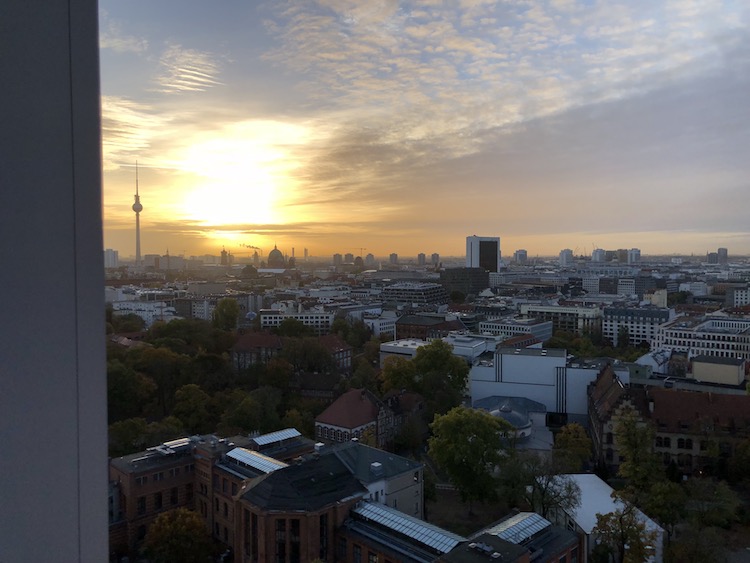 view from the Gastroenterologie ward on the 18th floor

Being stuck in a hospital doesn’t mean that nothing happens, that you can’t learn some things about yourself and other people. As long as you’re conscious, there’s no such thing as a sabbatical from life. I discovered, for example, that the German medical world is pretty fantastic. Every doctor and nurse was competent, thorough and friendly.

My three wildly different roommates during the course of my stay were also instructive. Frau D is a diminutive, bald (with blond wig) 71-year old from Frankfurt-an-der-Oder, on the Polish border. For the last 40 years she has been suffering from Crohn's disease but it has not sapped her spirit. She kept busy as a bird at dawn, talking loudly to her husband or one of her children on the phone, noisily arranging and re-arranging her things, which all seemed to be wrapped in rustling plastic, or giving me advice from her extensive hospital experience. "It's much better to get that daily anti-thrombosis shot in the stomach than the thigh." (She was right).

Forty-something Lei, with a thyroid problem, is from Bejing and has been living in Berlin for six years with her elegant businessman husband. I have never seen anyone so graceful, so perfectly contained. She glided around the room in her long, luxuriant black robe, tied snugly around her willowy waist, serenely going through the same motions every morning in the same order. She is a fervent Christian and folded her delicate fingers in prayer before every meal, consulted her gold-leaf Bible frequently. 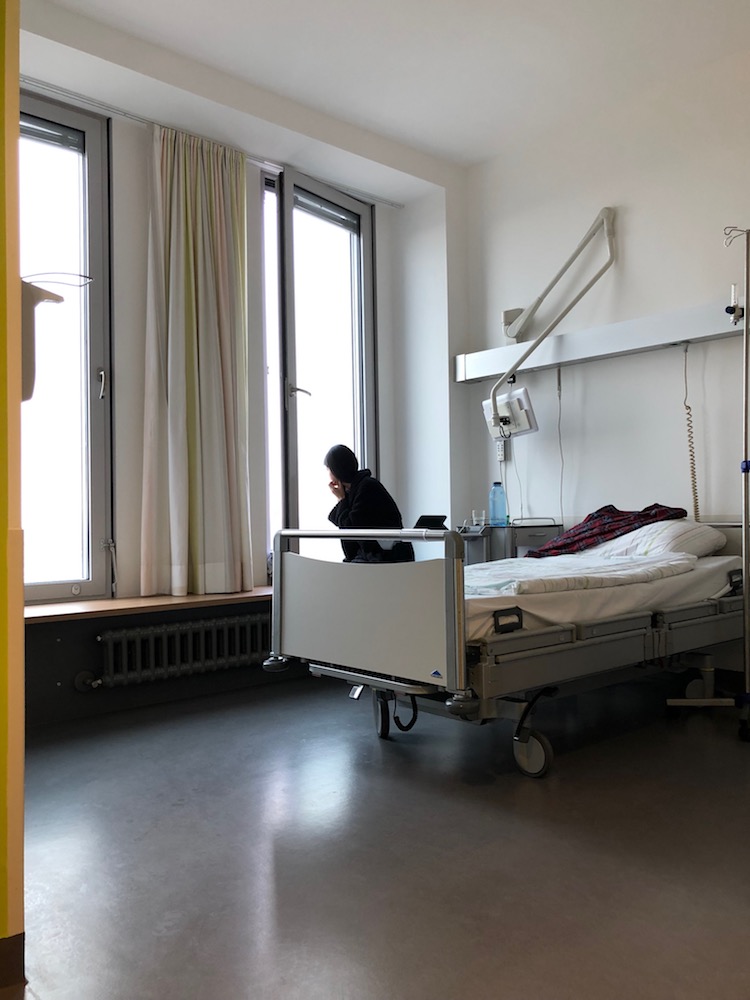 Saliha is a young Syrian refugee with long, thick, black, wavy hair. In her two years in Berlin she has been married to a half-German, half-Palestinian, then unceremoniously dumped by him after her first horrific bout of Lupus. The onset of this autoimmune disease sent her into a coma for a month, followed by two more lying flat on her back. She showed me a photo with so many tubes going into her mouth she looked like a telephone exchange. She then described the break-up with her husband in minute detail, even reading me their text messages to one another. "After all that," she said, looking at me defiantly,"I lost my hair." And to my complete astonishment, she peeled off the flowing locks. 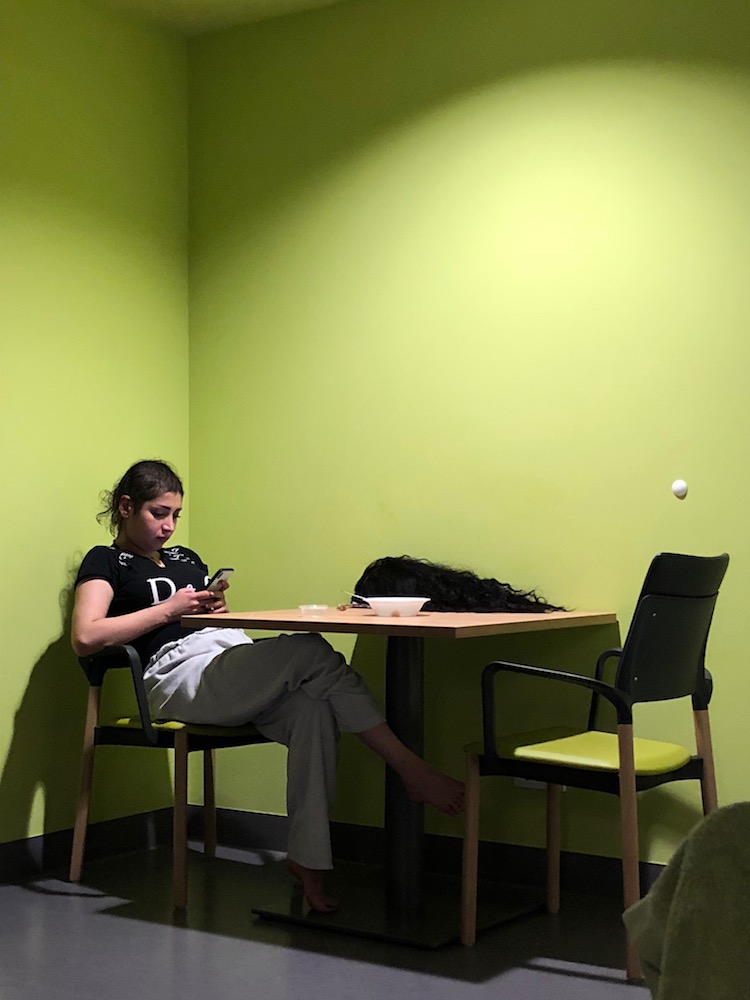 I was full of admiration for my roommates' bravery and resilience in the face of chronic illness and for their apparent ability to cope with hospital life better than me. Frau D's manic fussing at first seemed to me a mildly irritating waste of time, until one morning when I was feeling really low, I put some order to my own things and felt infinitely better for being in control of my possessions, if not my health. Lei made me slow down, impose a little routine on my mornings, which had a similarly positive effect on my psyche. And after her colonoscopy Saliha, who at first had seemed almost indolent, burst into action. She showered, removed considerable clutter from her bedside table and fetched clean sheets from the trolley in the corridor with such pert efficiency, her claim of having made a lovely home for her feckless husband suddenly seemed credible. And I finally did something about changing my own neglected bed linen. 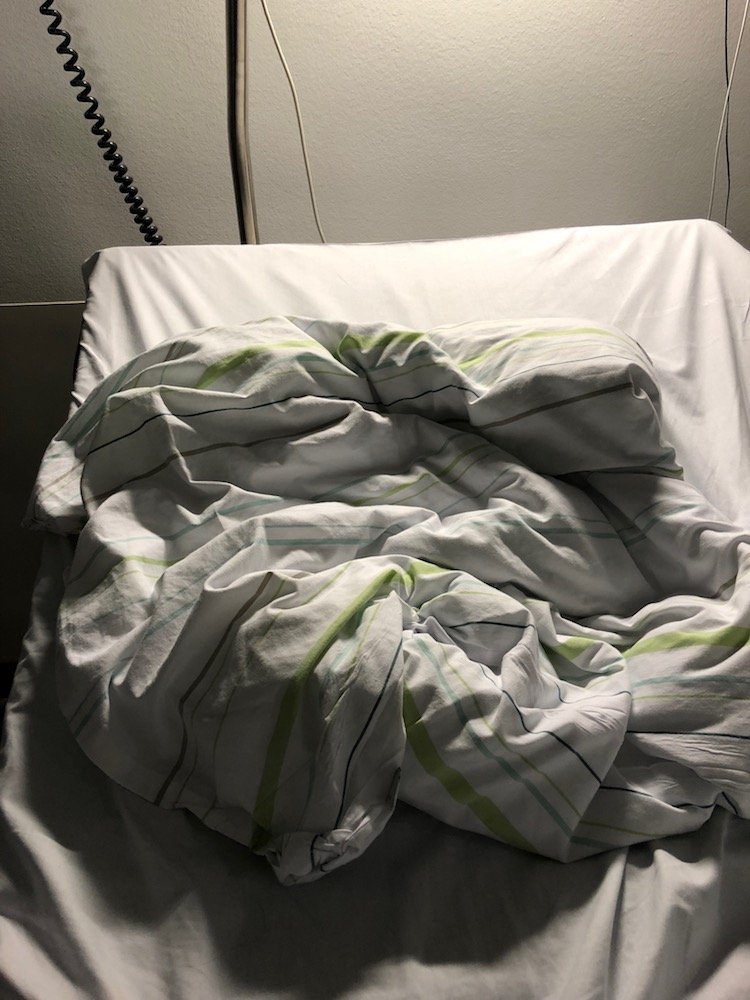 People are looking at you too in that closed environment and it didn't take hospital staff long to peg me, rescuer of two lost dogs, as a sucker. "Frau Flay-ming," I heard on Tuesday morning while strolling the corridor. An assistant doctor honed in on me. As this is a teaching hospital, she said, would I mind receiving a couple of medical students, just for a while. No longer than half an hour. Of course not, I said. I’m not exactly busy. An hour later a pair of polite, white-coated aspiring physicians arrived at my bedside. They asked many questions, probed and tapped me and listened to my heart, my lungs. No sooner had they left than another pair arrived. Then a group. By the end of the day I had been examined and questioned by six pairs or groups of students. The next morning "one more visit" stretched to three. 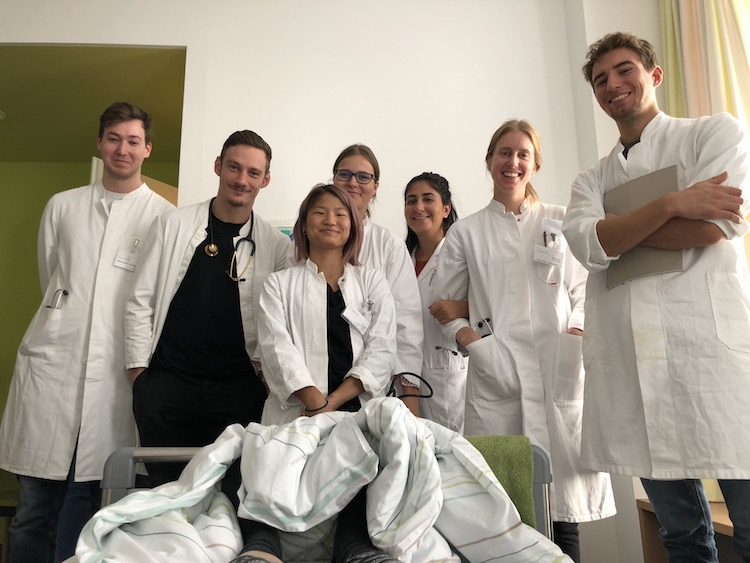 It was nice to feel useful and it did help pass the time, which can seem interminable in the hospital. Once the drugs wore off I couldn't sleep and the nights were purgatory. Ditto weekends when all the busy people are gone and in the eerily quiet corridors you feel utterly abandoned by the living. It didn't help that there was no wifi and I was reduced to communicating with the outside world via my pre-historic German Nokia for phone calls and my French iPhone for written messages. Since I am all thumbs (in the old sense of the word) on that little keyboard, I almost hurled the thing against the wall on several occasions. 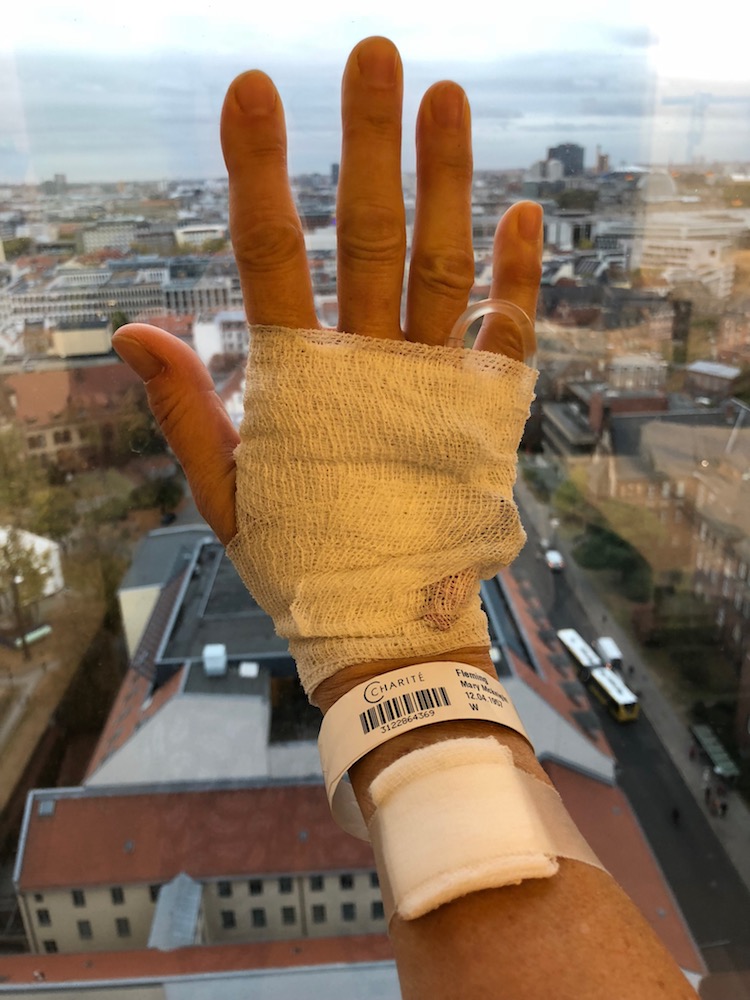 So it felt like salvation on Sunday evening when David was visiting and the nurse detached me from my water drip: ‘This isn’t a prison, Frau Flay-ming. You can go outside.’ Out I tottered. Unsteady feet or not, I then made daily excursions around the old and beautiful Charité campus. Along with David's visits, many calls and messages from friends and family, they were a lifeline. 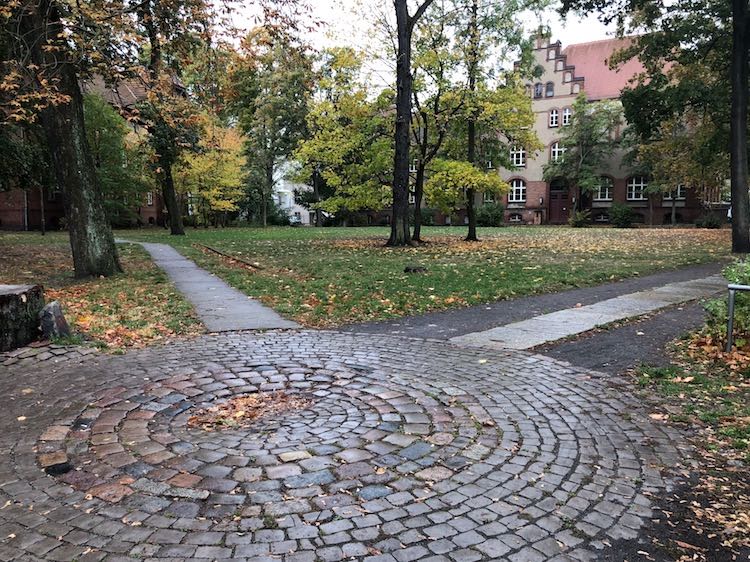 And I needed a lifeline because the worst of the pain may have been over but extreme discomfort was not. Much of the water entering my body through that drip stayed right there and by that Sunday evening, despite having eaten close to nothing (lack of appetite and the worst food I have ever tried to put in my mouth)... 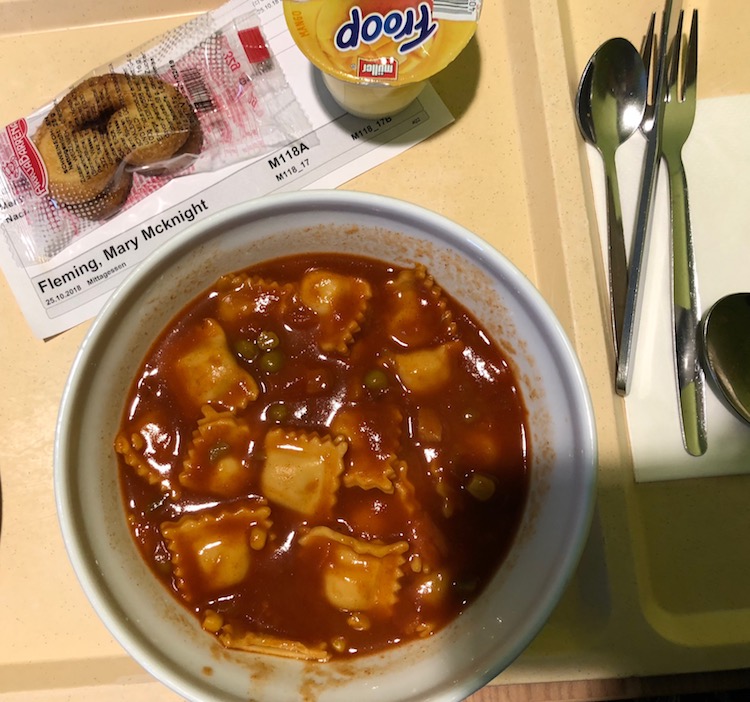 ...I had gained 11kgs (24lbs). From then on every morning began with "Frau Flay-ming!" as this woman barged through the door, flicked on the light and trundled towards my bed with this electric-chair-style scale. Since I still looked and felt like a beached whale, it was no news to me that the diuretic pills were working slowly. 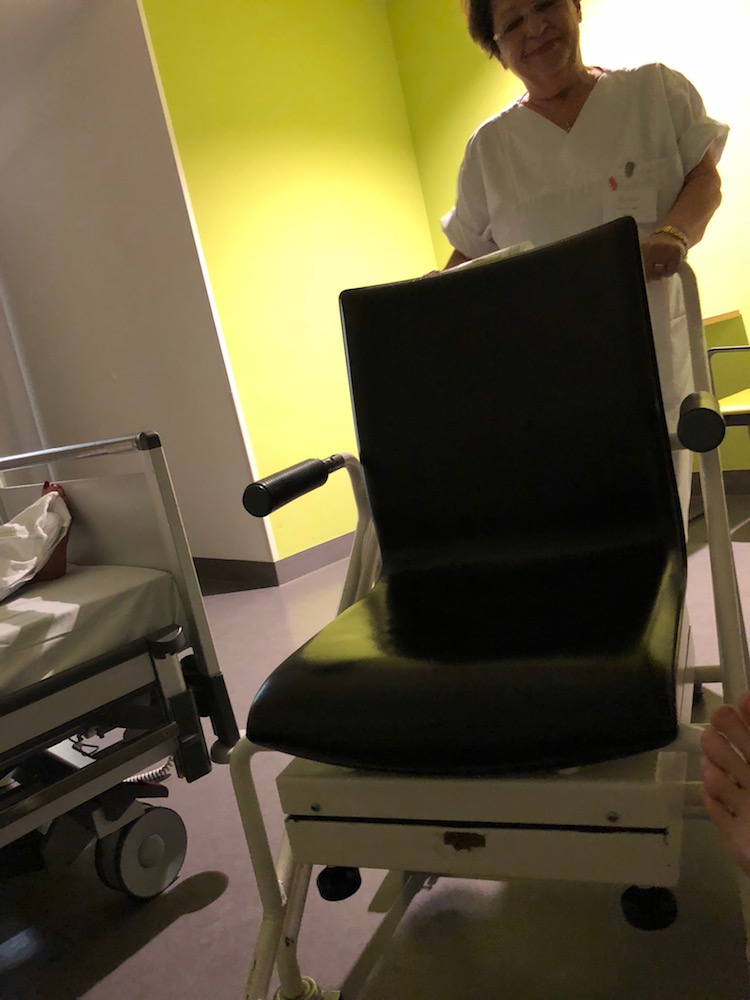 The week wore on. I had a third ultrasound, then an endoscopy, but neither revealed the cause of my condition, just liquid in a lung that they planned to remove with a pleural effusion (needle through the ribs). It began to seem I'd never get out. 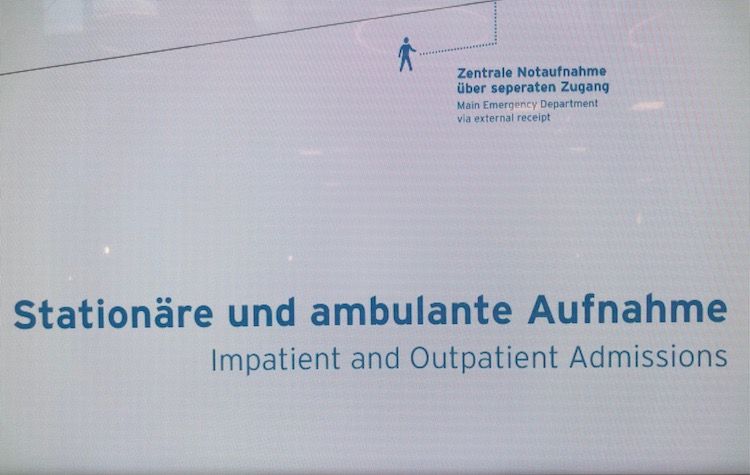 By Thursday afternoon, however, it was decided no needle was necessary and I could be released the next day. 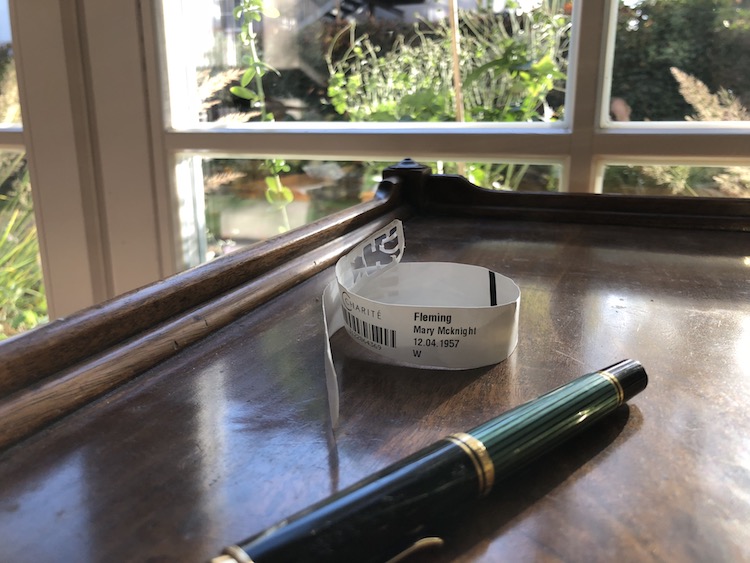 It was of course wonderful to get home, to sleep in my own bed. But the last two weeks have not been easy. The inflammation is diminished but still palpably present, despite a very tedious and challenging no-fat, no-alcohol, 3-litre-of-water-a-day diet. I've now lost 5kgs from my normal weight, meaning a fluctuation of 16kgs (35lbs) in three weeks. Though I'm back to short bike rides and long walks with that indefatigable dog, I still feel pretty weak, tired and mentally dispersed.

Even for someone who thinks about death with unhealthy regularity, the combination of David's heart and my pancreas has been a blunt reminder of our mortality. Three plus weeks ago he had had no real health problems. I considered myself--and by all appearances I was--a vigorous and fit 61-year old. Though an atrial flutter is usually a one-off occurence, we both now feel like damaged goods and it takes some time to come to terms with that. Longer, anyway, than nine days with my chronically ill roommates, however much I admire them.

The doctors are still keen to find the cause of my attack. In early December I'll return to Charité for further tests. Fortunately there's a chance I'll fully recover, that one day I'll look back at this episode as a cautionary tale with a happy ending. And so I'll hope.