Our new house in the Perche may be situated at the end of a track. Our nearest neighbours may be at an invisible distance. But that does not mean we are alone. 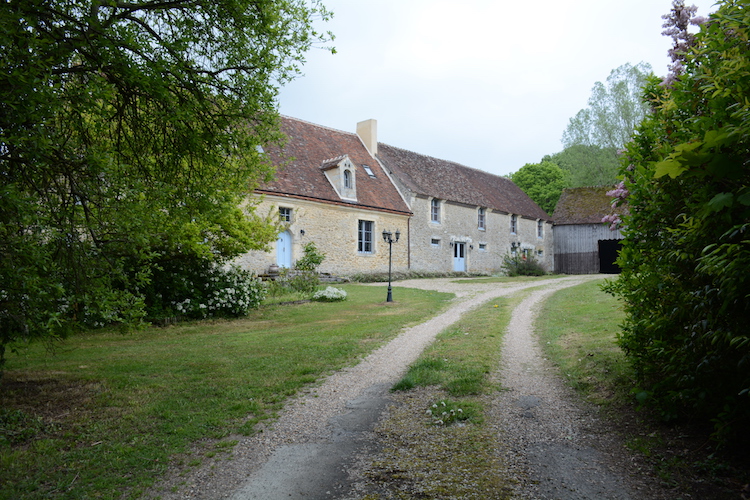 The habitable space of our property is in two parts. On the left side of the above photo you see the original seigneurie, or local noble’s dwelling, dating from the 16th century. To the right is the barn extension added in the 19th century. The two are separated only by the shared wall of the original house. Our predecessors, though they lived in the seigneurie, remodelled the upper level of the grange with the idea of renting out the space to holiday makers. 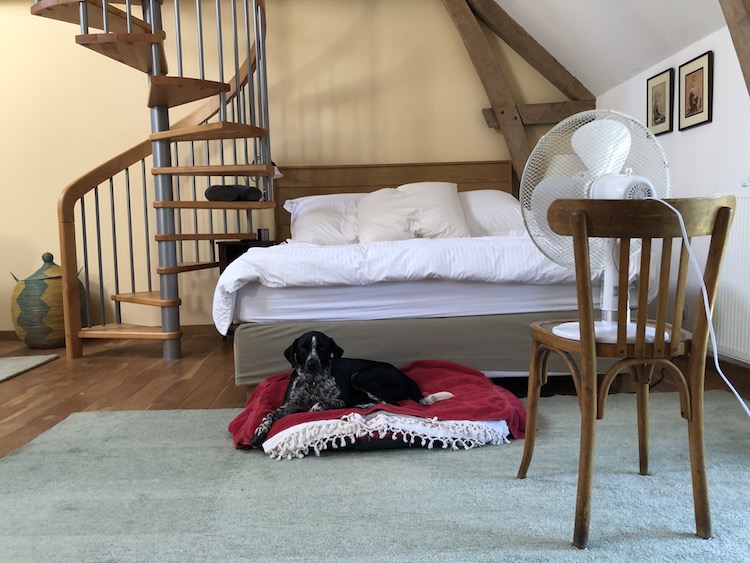 Pending renovation work and because our Berlin bed was too big for the staircase in the main house, we decided to sleep in the guest quarters ourselves. The other very large room provides ample space for David’s office and beloved pool table. That shared thick 16th century wall affords sufficient insulation for his audible and frequent phone or Skype calls. Here you see that windowed wall from two perspectives: 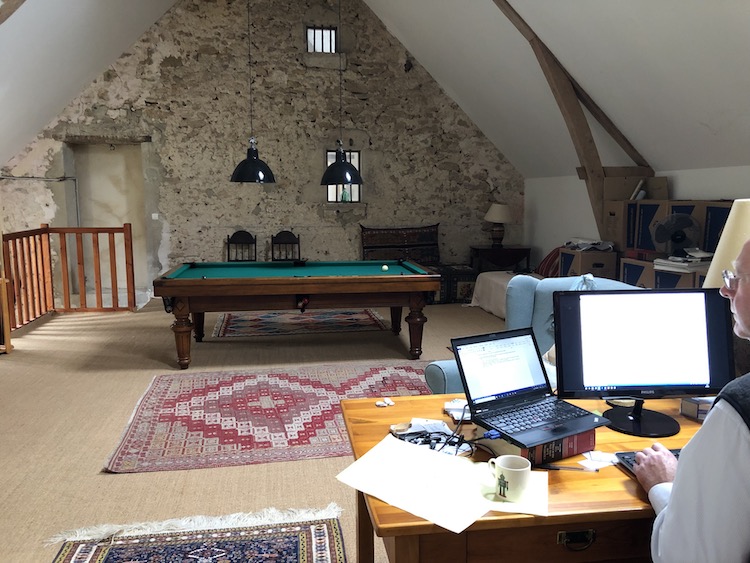 David in his office 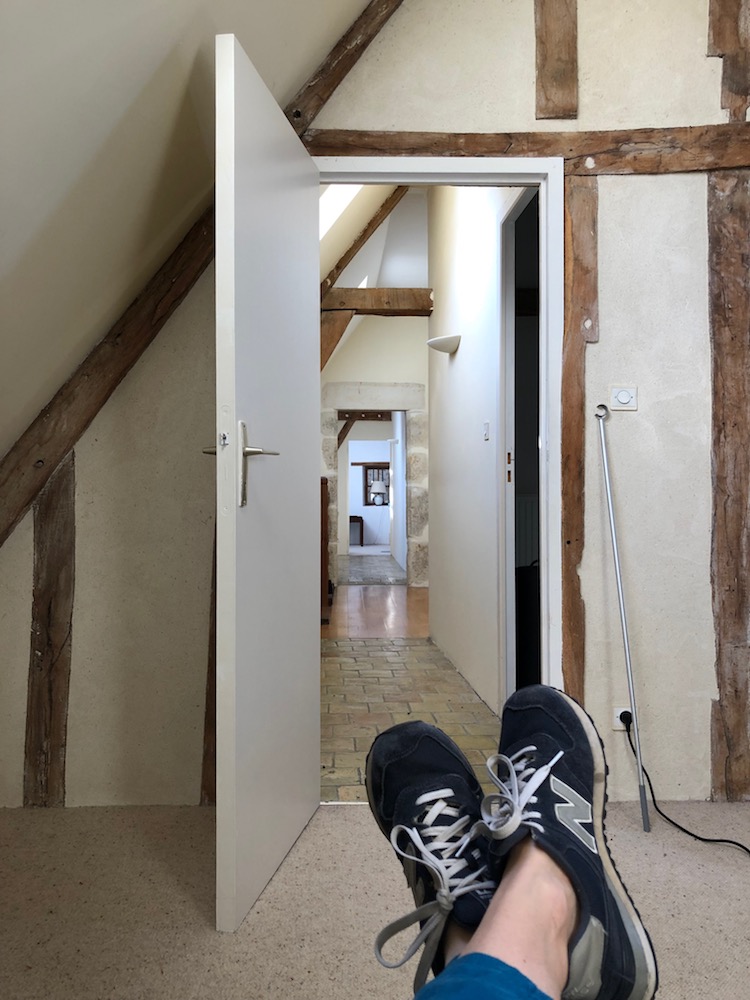 Me in mine, at the far end of the main house

The ground floor of the barn is still a barn, with cattle troughs for feeding, stalls for milking and mangers for hay. Since there is no direct access to our aerie from the house, we must enter through a barn door and climb an enclosed staircase. This door is barred but not paned, thus providing the perfect opening for a family of swallows. 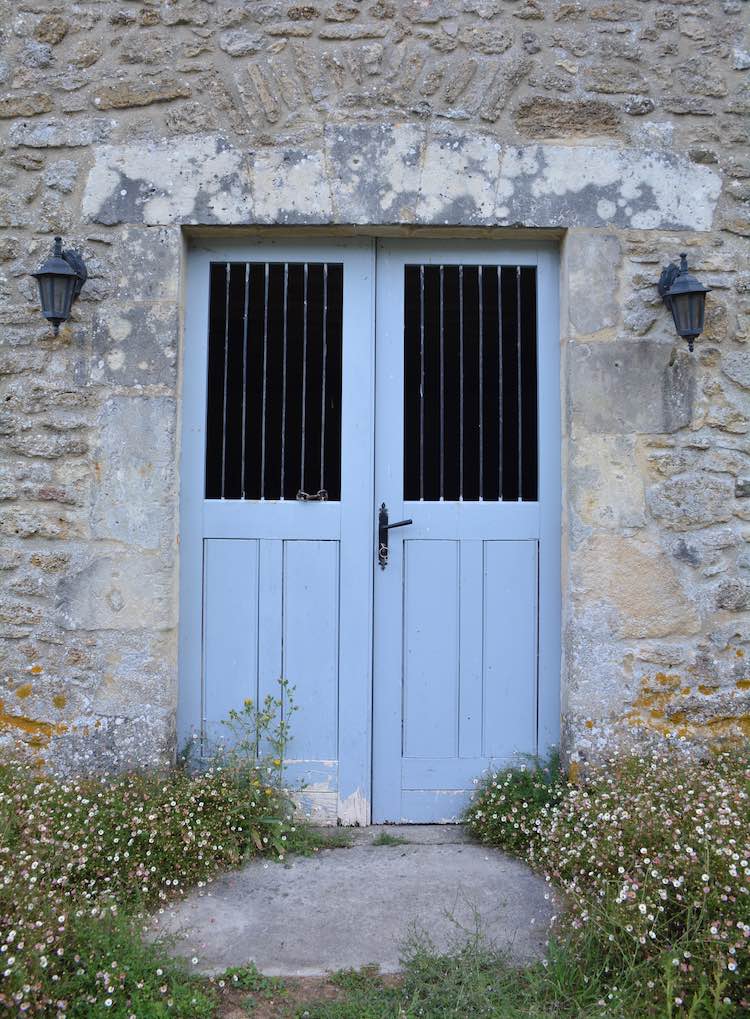 Swallows are small, migrating insectivores that used to make their mud nests in caves but now flock to man-made structures such as barns, garages, stables or bridges. This capacity to adapt may be why they continue to flourish on all continents except Antarctica. 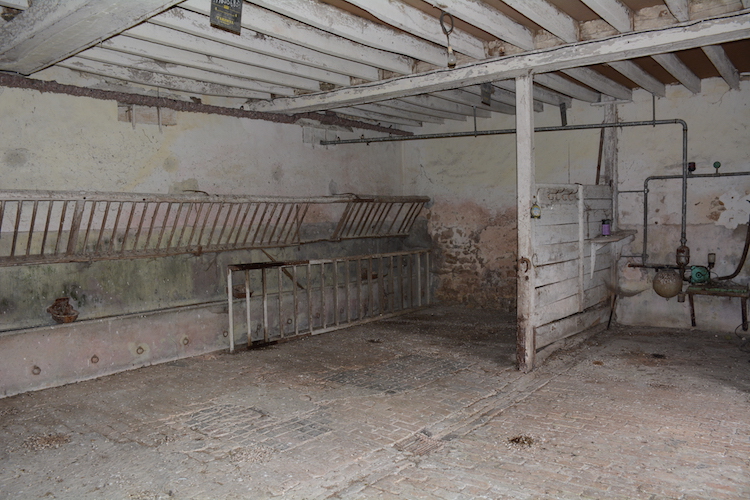 When we first arrived Frédéric and Corinne B had left the barn immaculate. You could wander at leisure and examine the residual milking equipment and mangers. Come late spring the odd swallow would whoosh its way by your head. How sweet, we said. They must be returning from their winter in southern climes. By the time we left for our final stint in Berlin, about five of them were in residence. By the time we moved back definitively in late June the flock had doubled. 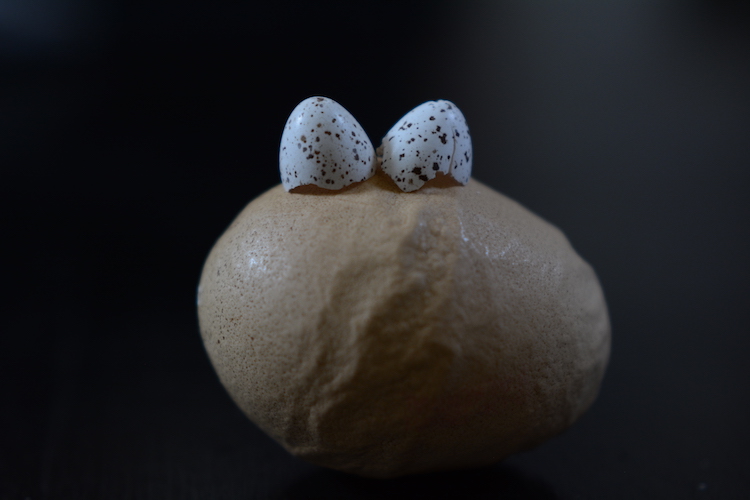 Why wouldn’t it? The habitat is perfect. Perching possibilities abound. Besides the mangers and stalls, there are pipes, some covered with woolly insulation that can also be picked at and used to pad the nests. Outside it’s just the way swallows like it: open farmland with lots of bugs to eat in flight. 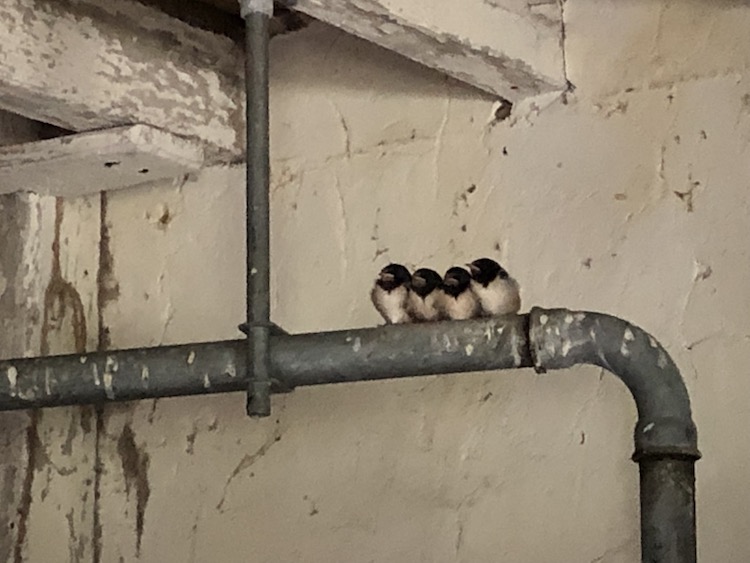 They are so chuffed with this life that they continue to proliferate. I’d say today we have at least thirty, with more on the way, from the looks of this roosting mother. 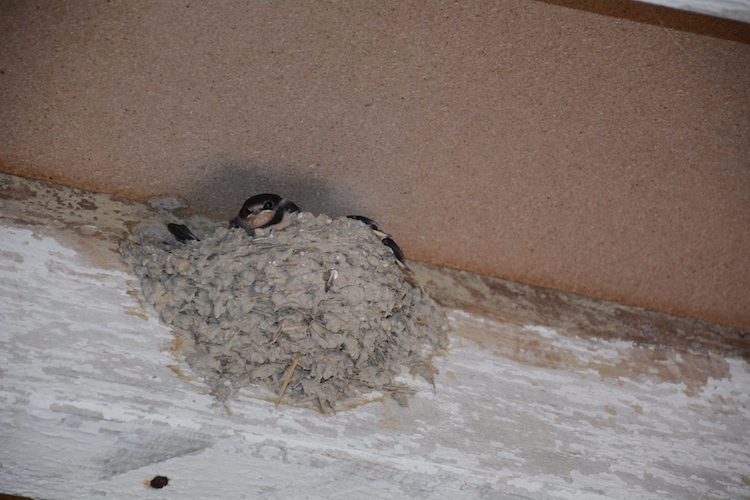 We are decidedly not alone. These busy, vociferous creatures dart and swoop between the bars, in and out of the barn. Inside they fly around in circles, wings whirring, all the while disputatiously scolding one another with high-pitched chirpings and trillings. 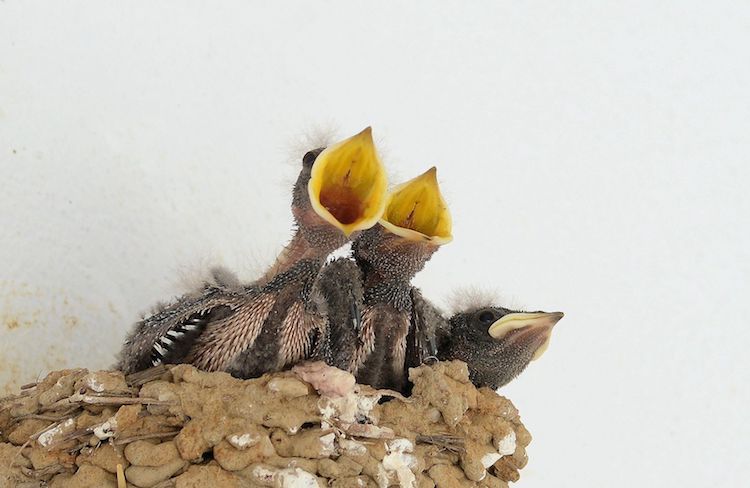 At times, given their numbers and noise level, the place seems to belong more to the swallows than to us; the notion of knocking before entering does not seem misplaced.
And as they multiply, so does their poop. By now it is absolutely everywhere, from the floor… 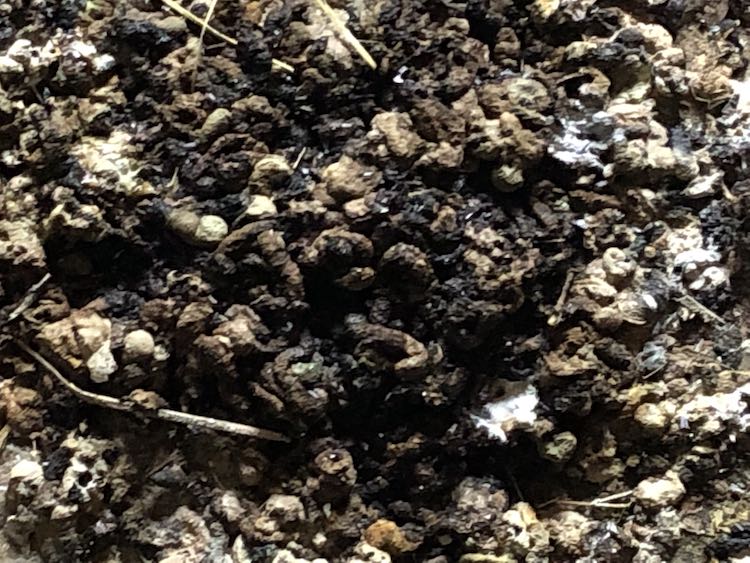 This is not a Jackson Pollack

…to all surfaces, including vertical doors and their handles. Cute they may be; housetrained they are not.

This summer many family members and friends have visited us here in the Perche. We have travelled to Denmark for a 25th wedding anniversary. 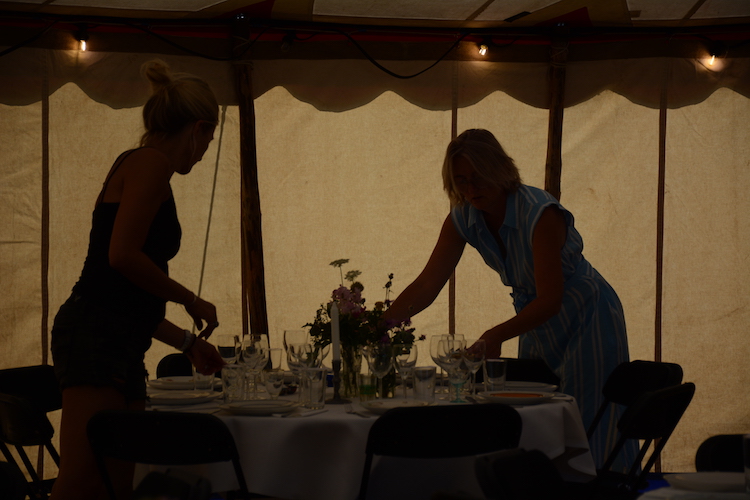 This has meant lots and lots of talk and at least half of it has been about our poor planet. Given the drought and the 40°C+ (104°F+) temperatures we have endured, it's not surprising. We have lamented increased rainforest deforestation and inadequate, if not deleterous, government intervention. We have discussed our own weeny, individual efforts to combat climate change, all the while noting that we continue to drive cars and take planes to farflung destinations. We have admitted to feeling both powerless and hypocritical. The discourse often finishes with someone saying: of course the real problem is that there are too many of us.

Certainly most of the non-humans on the planet, including the swallows in our barn, would agree with that assessment. Dozens of species are going extinct every day, in part due to lost habitat. And indeed, come January the swallows, though not an endangered species, will lose their home when the work begins to turn the barn into our sitting room and bedroom. Though we have fretted about dispossessing the birds when they return next spring, we have not changed our renovation plans.

We'll get our way with the house but perhaps not, ultimately, with the planet.