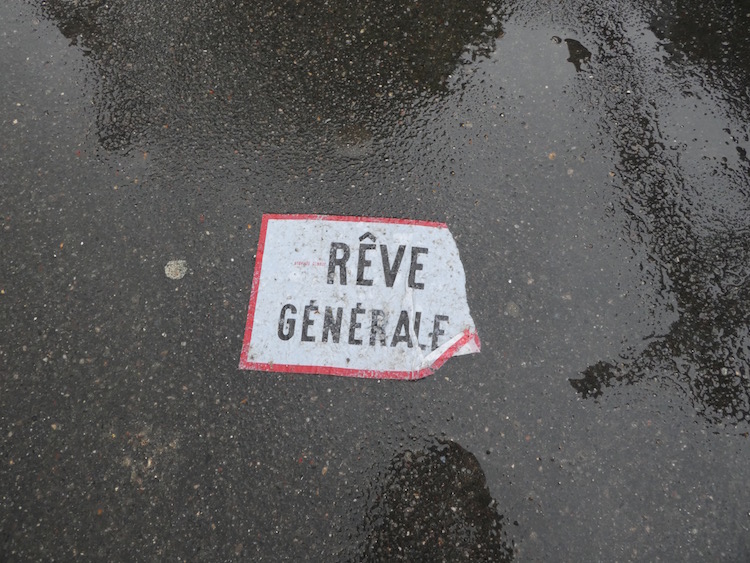 Just before France hosted the World Cup in 1998, I was a real spoilsport. In the days running up to the tournament, I lamented: Oh no! We’re going to be overrun with rowdy, unseemly hordes! It’s going to be awful! I wish I could leave!

How silly I felt once the fans started arriving. They were cheery and energetic; they made the city feel festive and joyful. I got completely hooked on watching the matches and jumped up and down in front of the TV set when France beat Brazil in the final.

What a difference a decade or two can make. Now, with France hosting the European football finals, there’s no need to prophesy doom. It’s here. 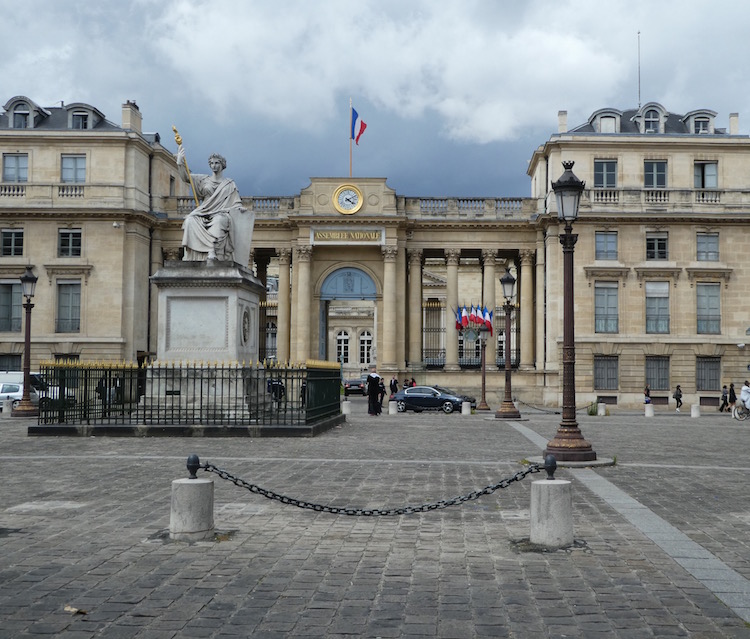 The National Assembly, safely cordoned off

If the city felt under siege two weeks ago when I last wrote, it now feels like a full-fledged war zone. Tuesday another grève générale (general strike) against the new employment law was called (but spottily followed—I managed to take both Métro and the line A of the inter-urban RER without even the slightest delay). The CGT union and other discontents also staged a demonstration that had sirens howling practically every minute from 6 in the morning on as legions of police vehicles mobilized for the afternoon march. 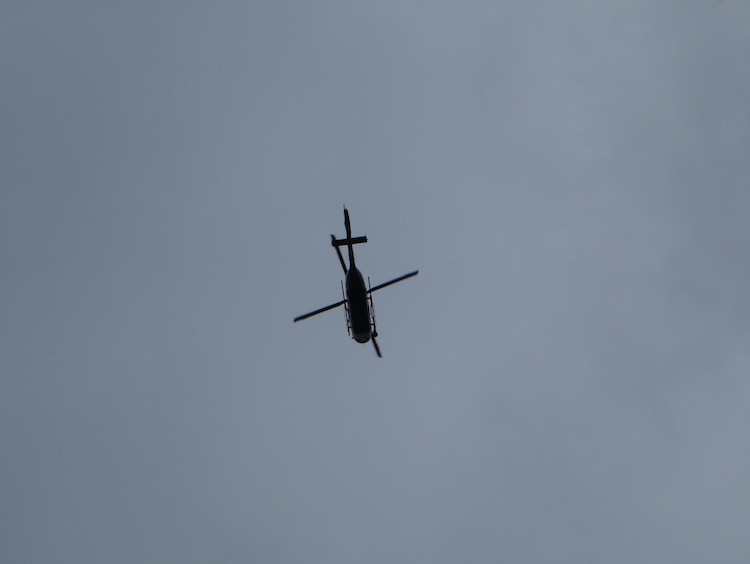 By 3 p.m. there was also a helicopter hovering overhead. Concentration was impossible; I headed out on my bicycle to have a look for myself. Here’s what I saw coming towards me on the boulevard des Invalides:

One set of law enforcers... 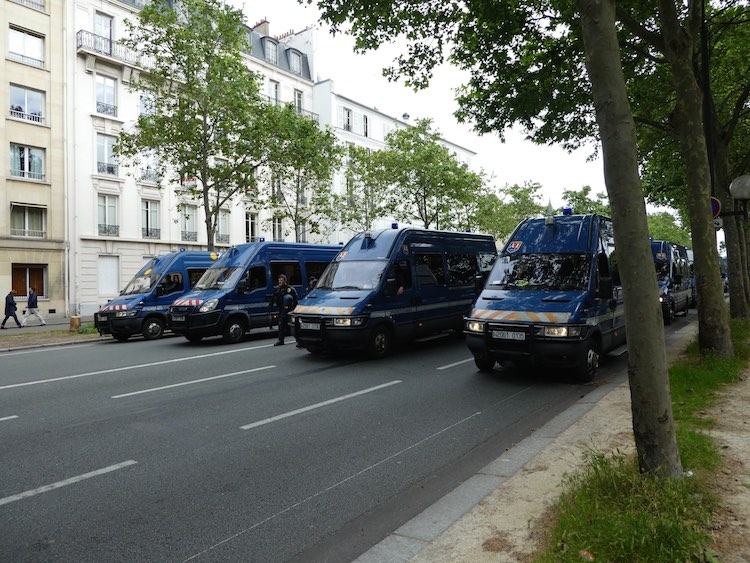 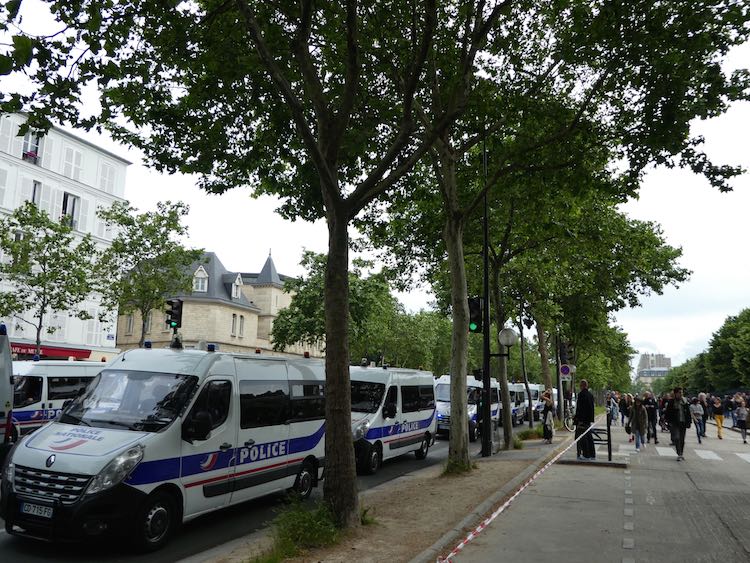 Behind them came a motley mix of discontents of all ages, their grievances reminiscent of the Occupy Wall Streeters as they unsuccessfully tried to impose rhythm to their chant 'An...anti....anti-capitalisme!' 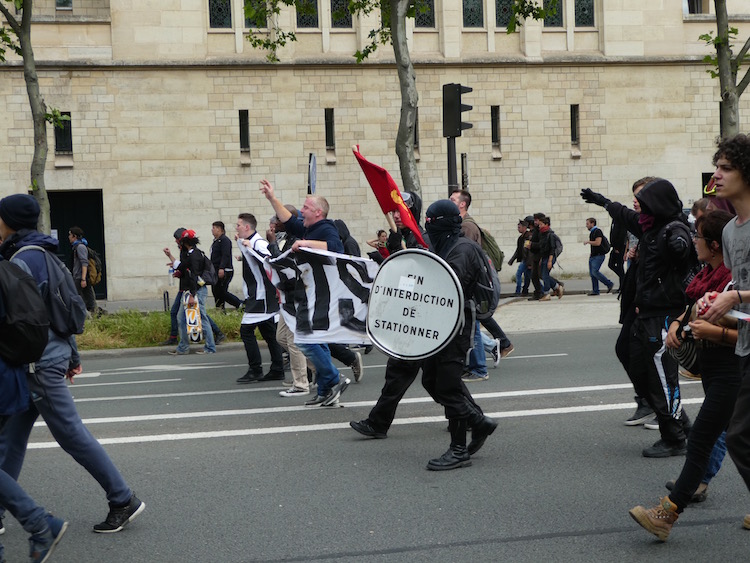 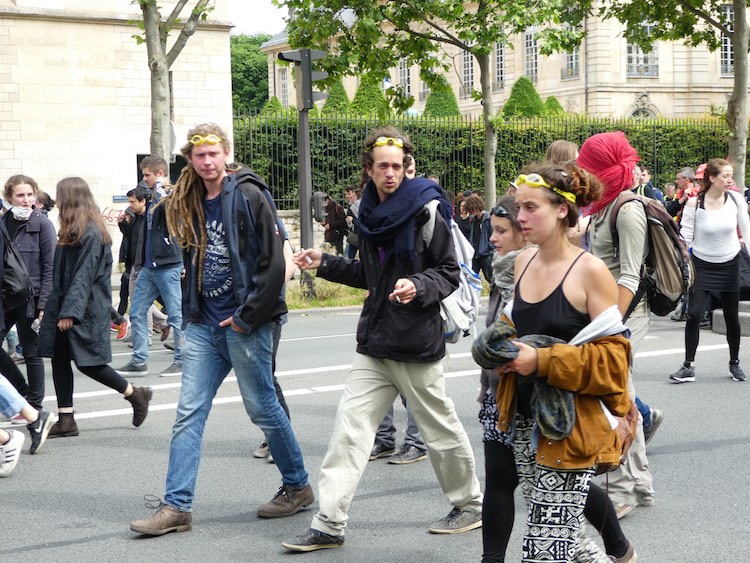 Then came the professionals, the CGT-ers, whose DNA seems to dictate a need to demonstrate, at least several times a year, though never on weekends, Fridays or during their five-week summer holiday. 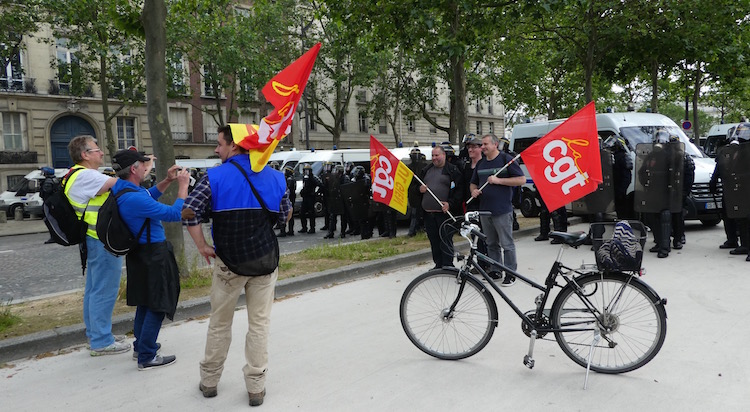 Protestors and my bike, posing in front of riot police

Oddly, the line between protest and parade with these hard-liners can be a fine one. Demonstrators stop at cafés along the way to drink a beer or play statue: 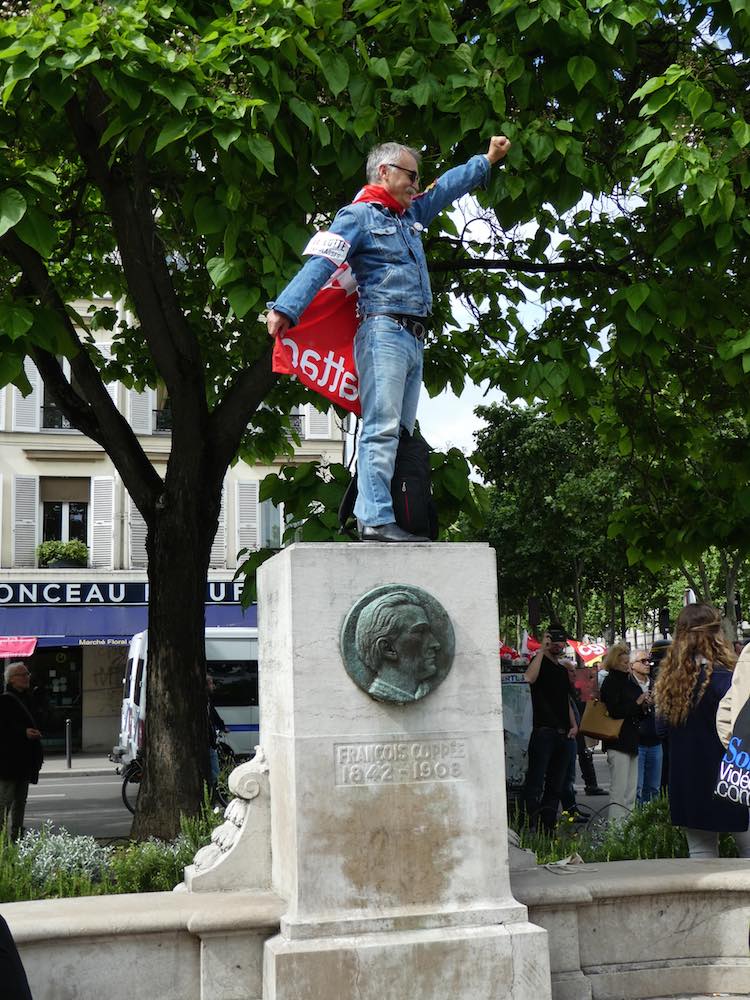 Meanwhile, the riot police, in their Darth Vader helmets, can add a sinister rather than a reassuring note.

The cortège ended on the esplanade des Invalides, where things got more confrontational and tear gas rendered the air unbreathable.

So many streets were blocked off, I actually couldn't get home, but this was partly because not far from this scene is the Champs de Mars, the park in the skirts of the Eiffel Tower that has been transformed into ‘la fan zone’ for the football tournament. There are police barriers closing off street after street and police presence here is so pervasive it is hard to know how any agents were spared for the demonstration. La fan zone itself can only be entered at certain points and after a serious police search for any of the following items: 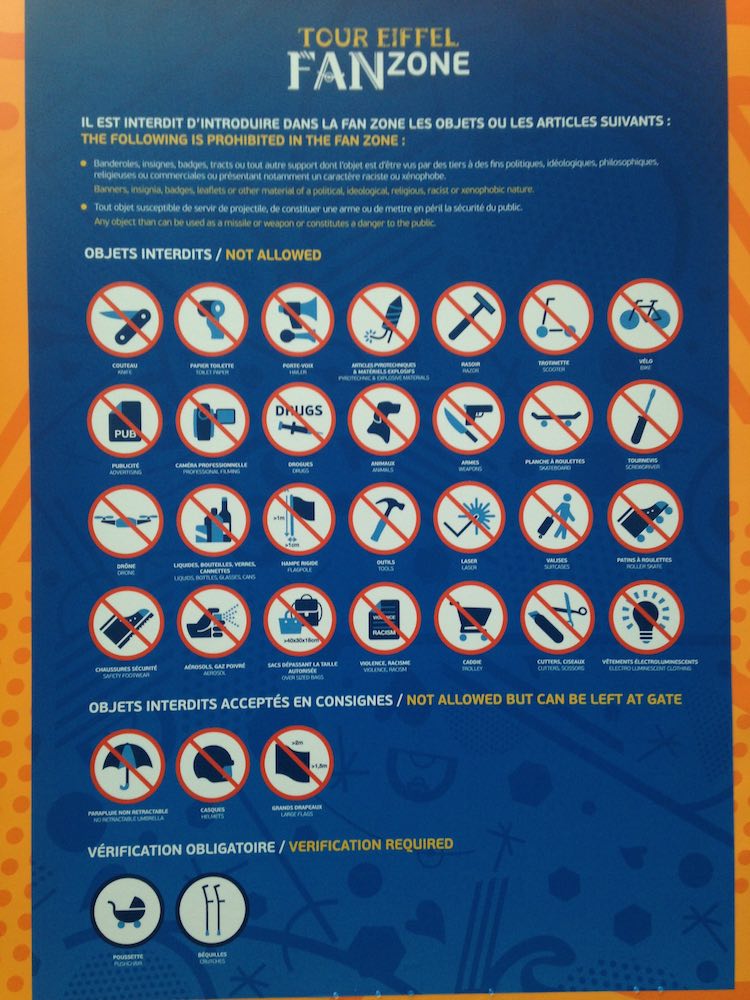 This long, curious list of banned articles includes loo paper (?), drones and ‘electro luminescent clothing’ (whatever that is).

The need for such heavy police presence and so many restrictions--not just around the demonstration and l'Euro but in our daily lives in general--is of course the threat of violence. If not terrorism then hooliganism or just generally deranged, destructive behaviour.

Despite increased precautions, the pace of violent acts this last week has actually picked up and the scope has widened confoundingly.

Just days after the Orlando tragedy, apparently inspired by a toxic mix of jihadism and sexual confusion, a terrorist in France, who may also have carried a personal grudge, went to the house of two police officials and stabbed them to death in front of their three-year old son. Meanwhile ‘professional’ Russian hooligans were provoking their unprofessional but equally thuggish English counterparts into rampant violence on the streets of Marseille. In Paris the fringes of that Tuesday demonstration, les casseurs, as they're called, had no compunction about pelleting a children’s hospital with rocks and debris. 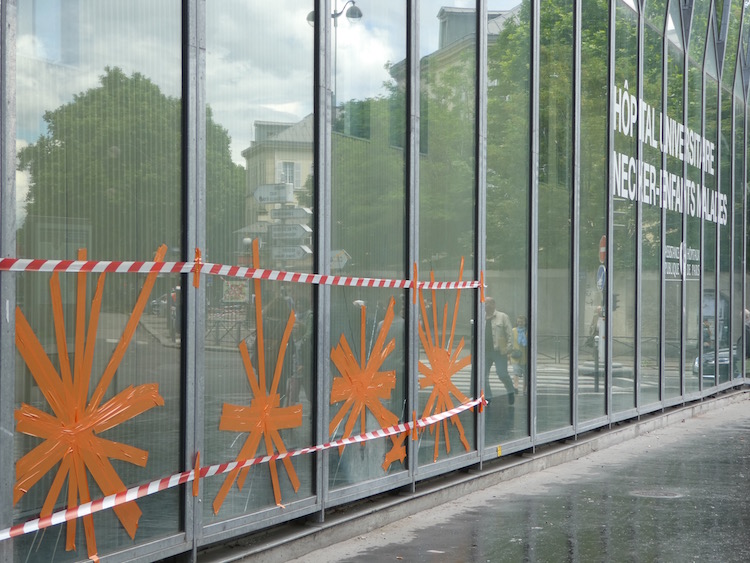 In a bizarre twist of fate, the traumatized child of the killed police officials was actually on the other side of those walls as they were under attack. Then just yesterday a British MP was shot and stabbed to death in the middle of the street, apparently by a rabid Brexit-er.

It’s too much for the brain to compute, beyond a creeping awareness that the barbarians are already inside the gate.

As for the football, I haven’t watched a single match.