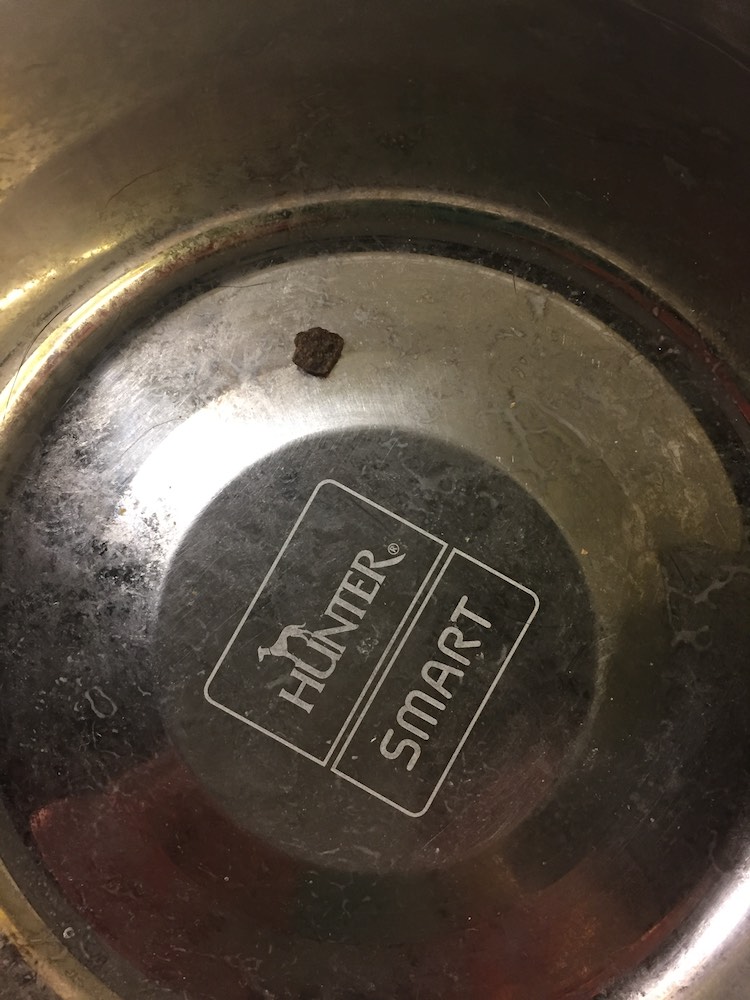 In Hans Christian Andersen's fairy tale The Princess and Pea, the prince searches high and low for a princess to marry. No one he meets is quite right. One rainy day a bedraggled young woman claiming to be a princess arrives at the castle. The queen, unconvinced, puts her to the test by placing a pea under twenty mattresses and twenty feather beds. Next morning the mysterious young lady says how badly she slept, how she’s covered in bruises. Obviously if a pea could have such an effect through all that bedding, she is the real thing. The prince has finally found his bride.

Until recently I assumed that Tasha, a mongrel hunting dog, came from very, very humble origins. I imagined she was the product of a one-night stand between two other mongrels. I pictured her owner (who did not even bother to get an ID tattoo stamped in her ear) to be a fat, unshaven paysan with a cigarette perpetually hanging from his alcoholic lips. When he didn't have his pack of feral dogs locked up in small cages in the courtyard of his ramshackle farm, he beat them.

But when we returned from our trip to India, etc., I began to wonder about my scenario.

Madame P, who has taken care of all our dogs when we travel, said that some pellets of another dog had got mixed up with Tasha’s and Tasha would have nothing to do with them.

“She would sit in front of her bowl," Madame P told me, "staring fixedly at five or six remaining croquettes. I had to remove the black one before she would finish her meal. Unfortunately, there are still some intruders in the bag.”

Over the next days I did not always manage to confiscate those sub-standard croquettes and Tasha always left them uneaten (top photo).

Then a couple of weeks ago she ate something in the park that made her very sick (I have noticed that generally she has a rather delicate stomach). Even after she'd seen the vet and was taking medication, she wouldn't eat - until I made her some chicken and rice. That she devoured. But when it ran out and I poured her some croquettes, she looked at me with incredulity and wouldn’t touch them. Since I had no intention of cooking her chicken and rice for the rest of her life, I held firm. But she didn’t relent for another couple of days of near starvation.

This got me thinking about her comportment in general. Most of the time Tasha refuses to sleep on the floor. She needs not just a bed but a bed with a blanket that she can rearrange with her paws and teeth to her liking. 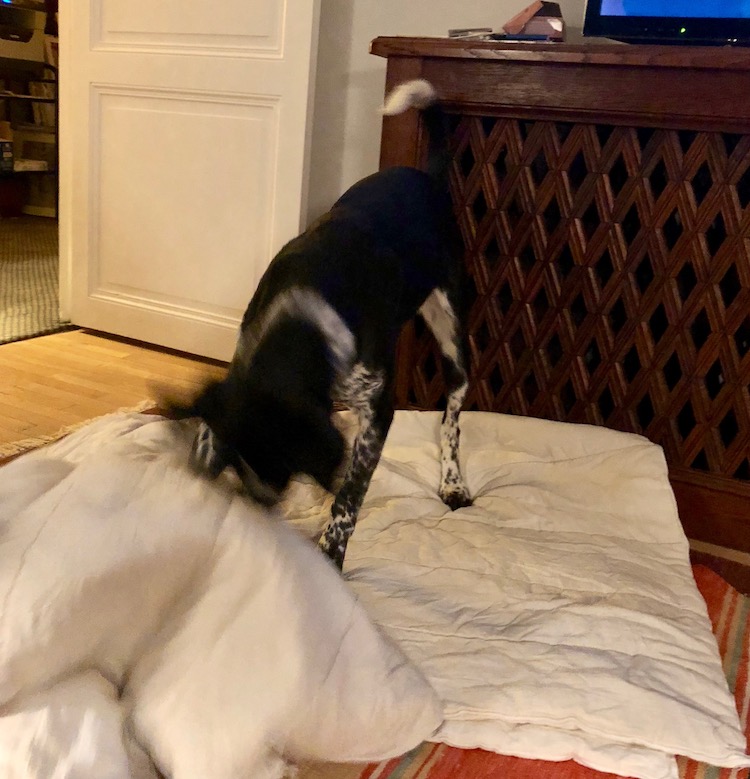 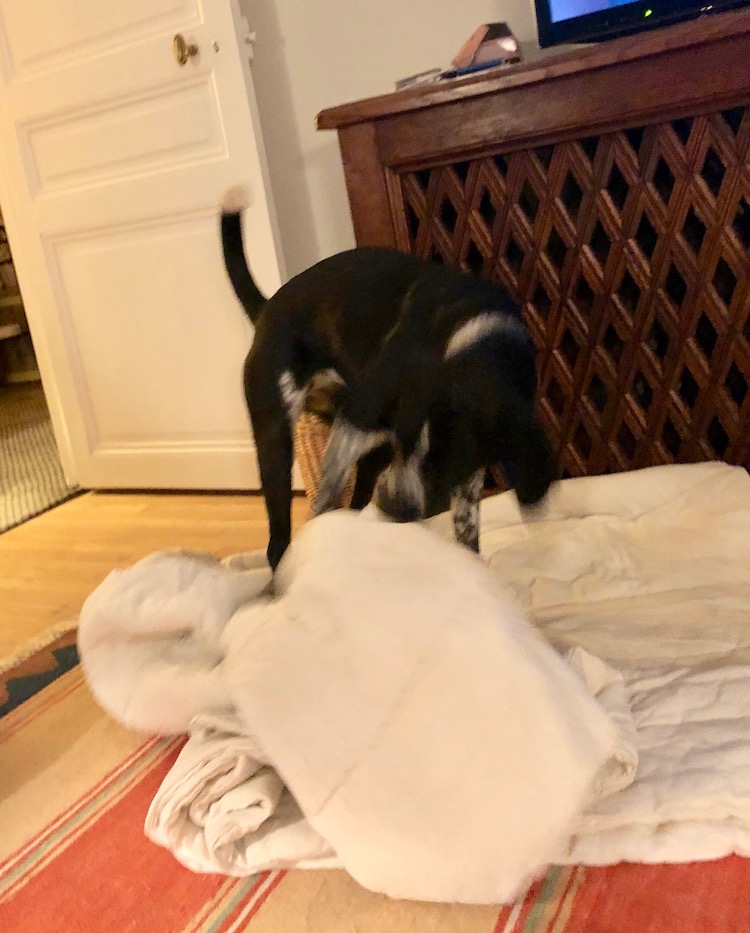 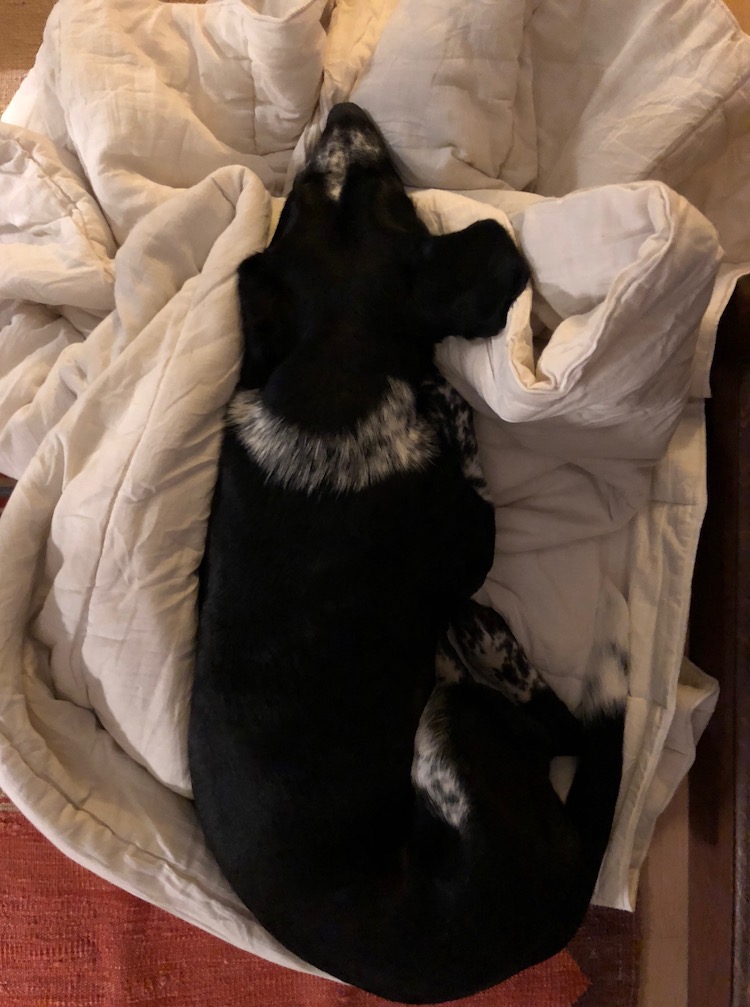 I could do with about 20 more of these

Though at first terrified of towels, she quickly came round, once she discovered their ability to make her dry and comfortable (she does not like to be wet).

The longer we have her, the more peremptorily -
one might say regally - she demands attention. 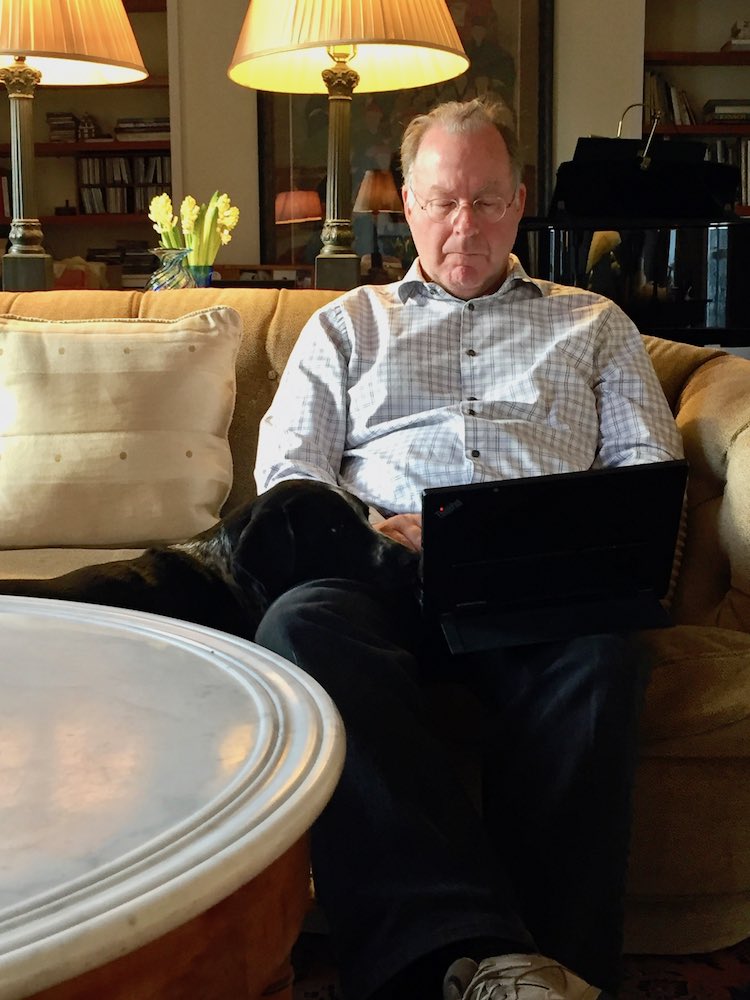 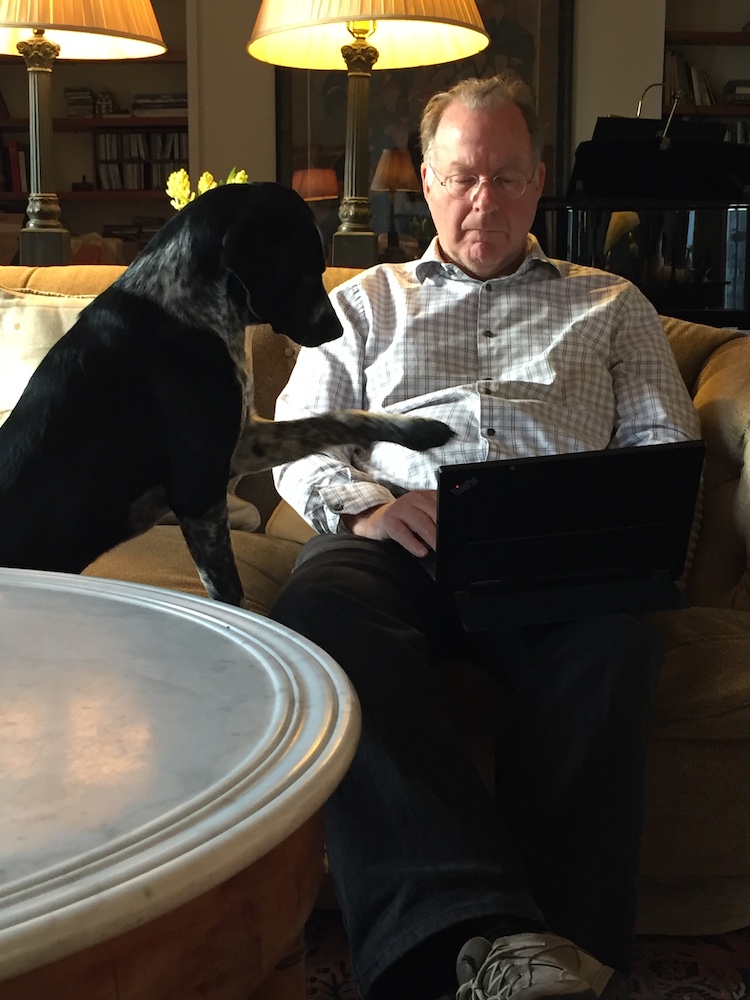 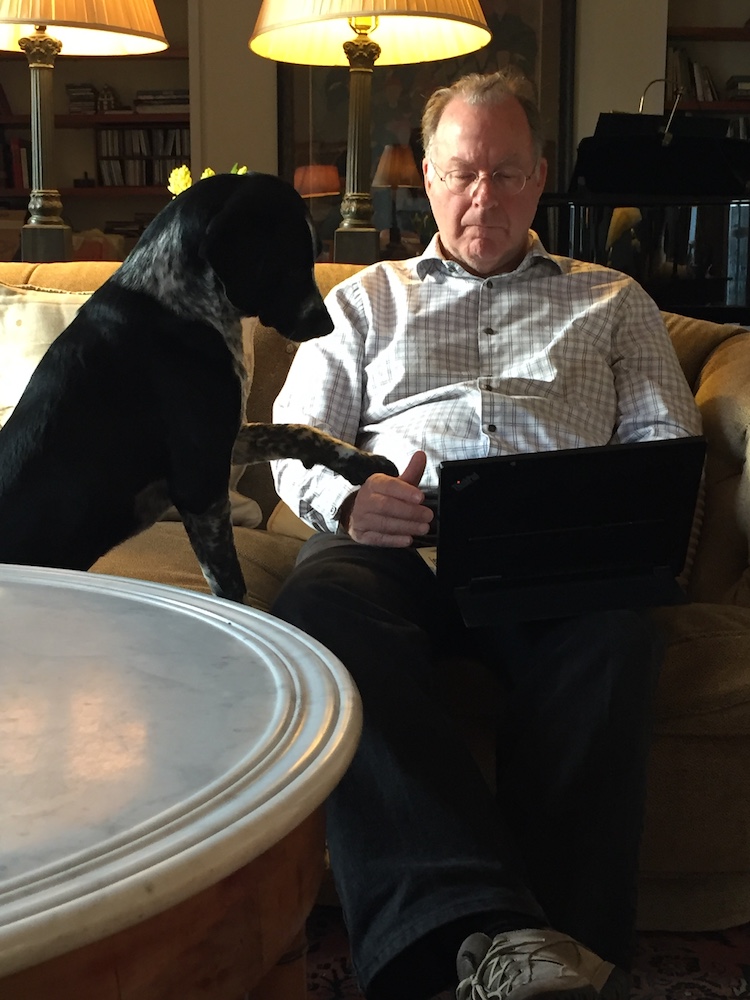 And her coat, especially on her chest, is as soft as ermine. 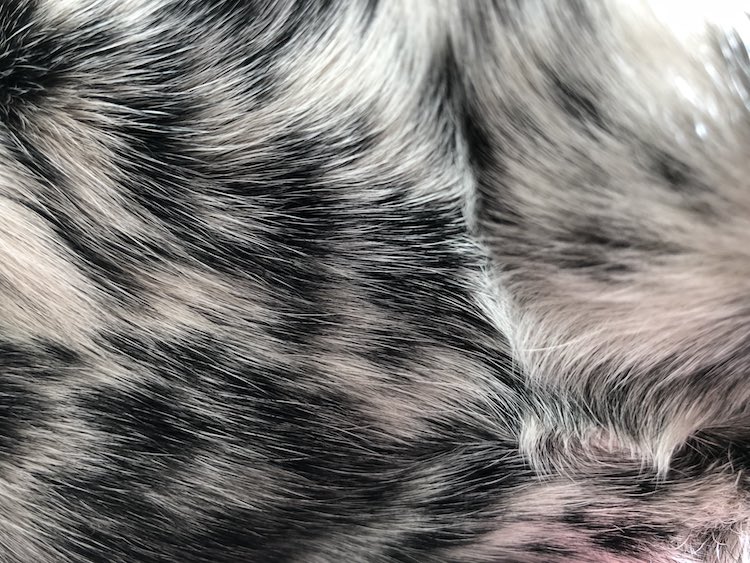 In the Tuileries when I express frustration at Tasha's not always friendly attitude to other dogs, my friend Nathaële V remarks: "What do you expect? She thinks the gardens are her own private domain." 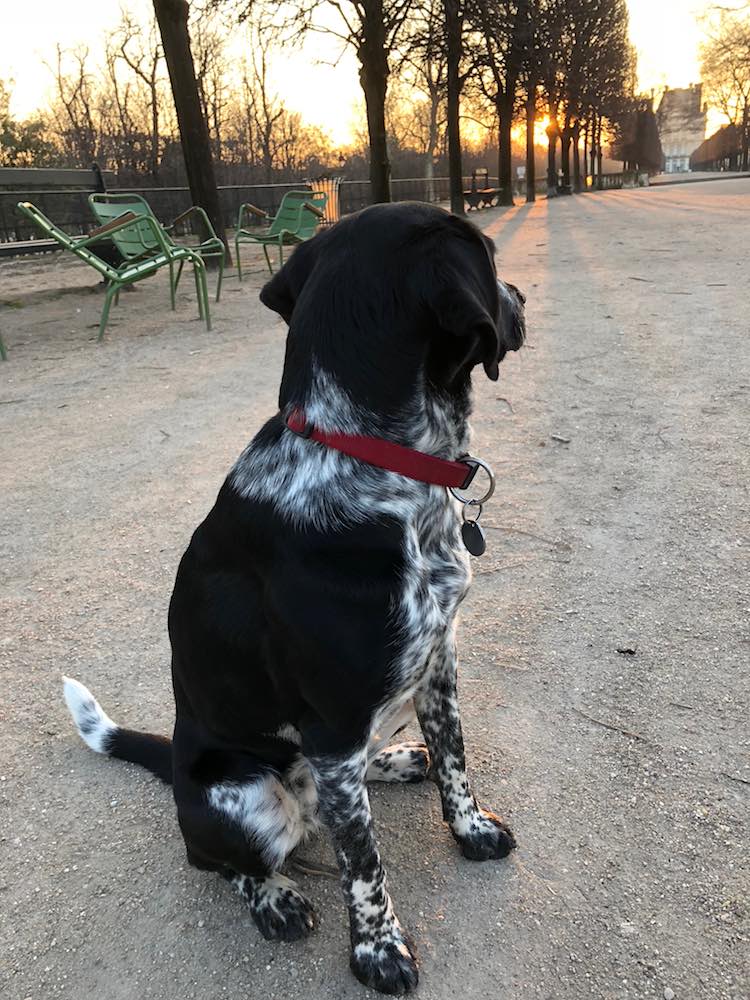 When we got our first dog Lily, a black Labrador, we knew all about her. That her full name was the plummy Lily de la Croix d'Albatre. That her father Lejie Royal Mail was a champion. We were given a pedigree that included the names of her parents, grandparents and great-grandparents, both sides of the family. When I went to pick her up, I met her mother and siblings; the breeder showed me the kennel where she was born. That she looked like a princess was no surprise.

But with an abandoned dog, who’s to know? Perhaps there’s blue blood in there after all. 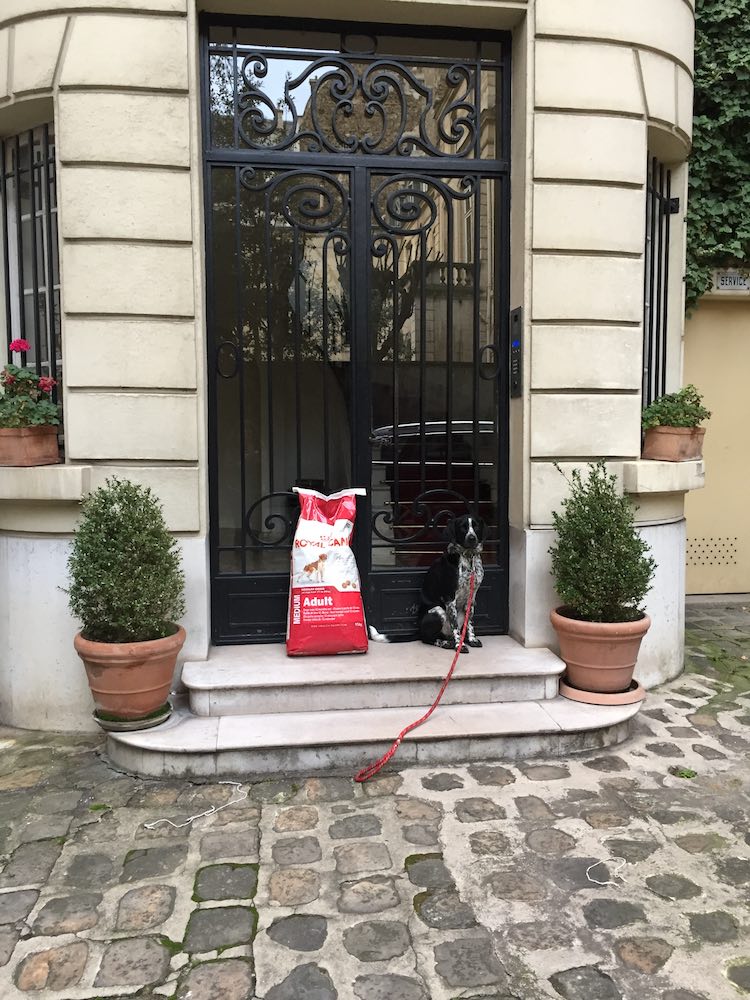 If so, I wish she’d start treating all her subjects with respect. A little noblesse oblige would go a long way.