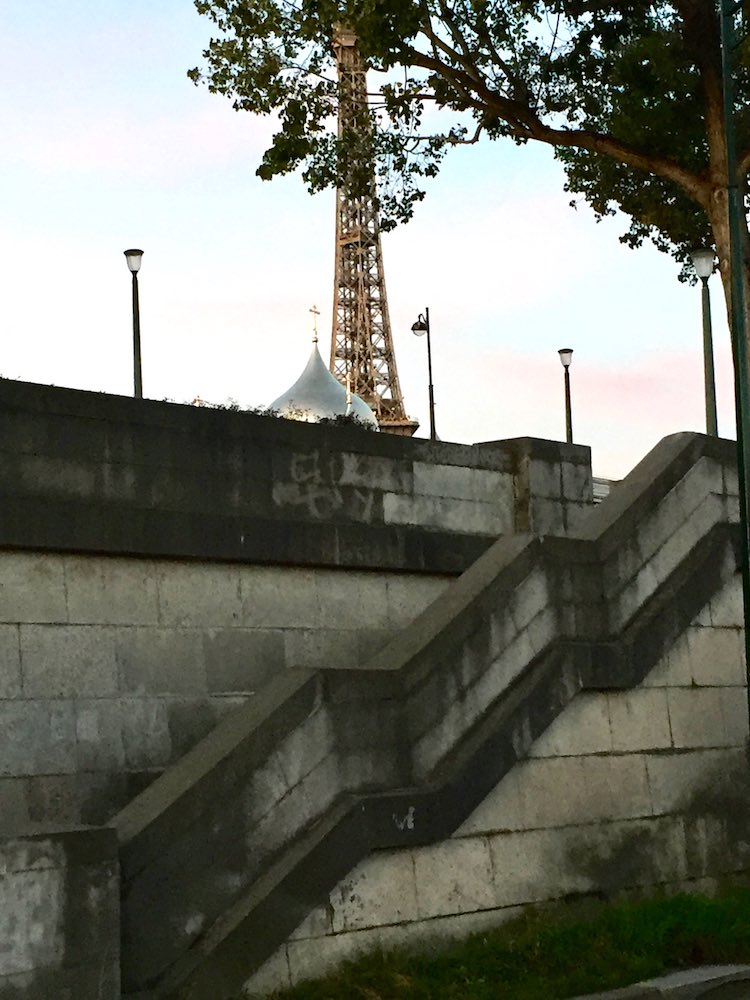 Onion dome of the new Russian Orthodox Church, seen from the quayside

Because the world is uncertain enough as is, I generally dislike change.

The routine of my days is a comfort: up early for some work before a dog walk along the same rutted road, then breakfast and more work. In the afternoon, piano and reading and maybe some more work before a bit of exercise and supper.

I like the world around me to maintain its structure too. For this reason I have been reluctant to renovate our Paris apartment, even if many rooms look as if they were still occupied by five young children. Why can’t we, I asked David the other day, keep that little plywood bedside table with the model-soldier paint stains all over it? The drawers still open; surely we can still find a use for it somewhere. 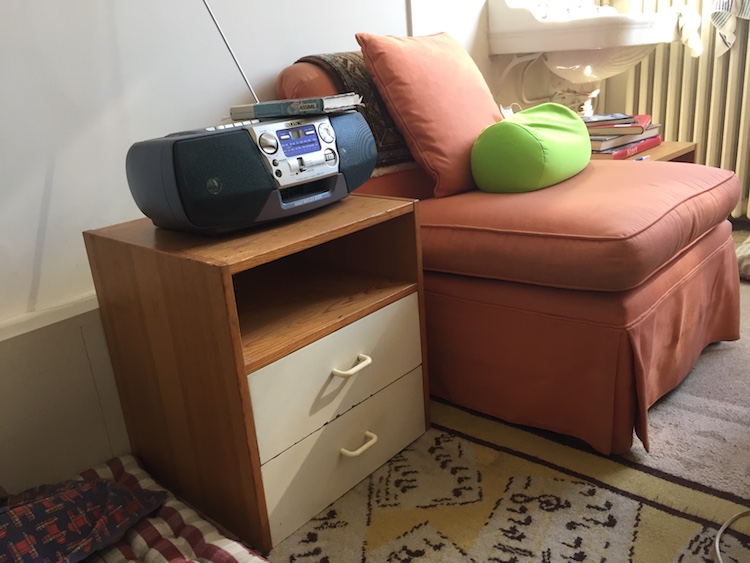 new home in my reject-furnished office

My resistance can verge on the ridiculous. A few years ago we changed dishwashers and in the new model the cutlery went on a top rack rather than in a basket on the bottom. I only stopped complaining about it when my son William suggested lining up those knives and forks and spoons in quadrants. Naturally I insisted the rest of the family do likewise.

But the other day David put a knife where the forks go and a teaspoon where the knives go. When I rectified the situation, he said: Can't we change quadrants? 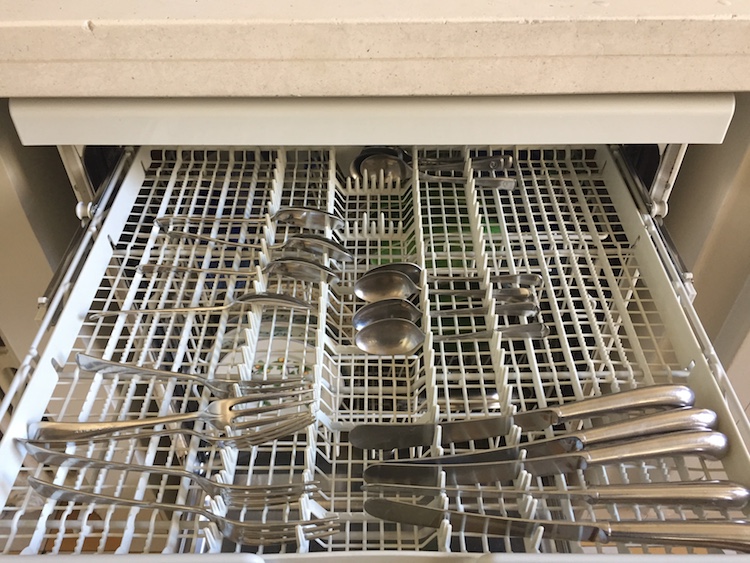 The troops, in their proper order

I have often wondered if Paris’ relative immutability isn't one reason I’ve been so happy living here much of my life. 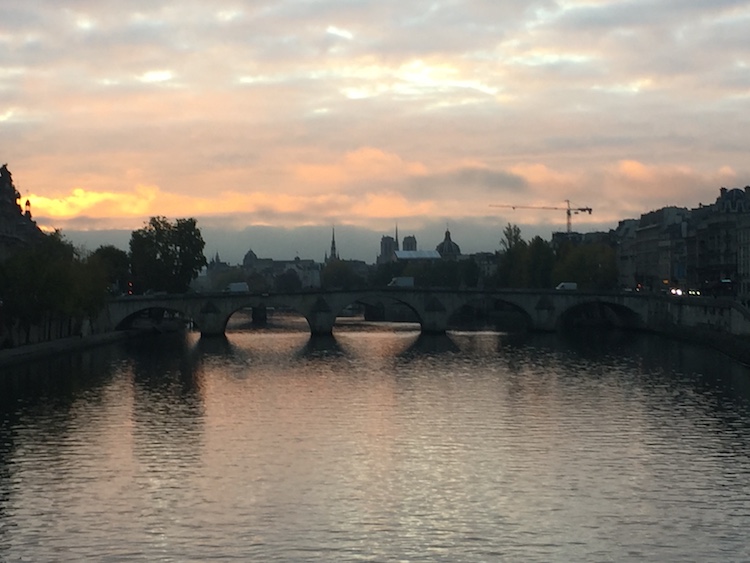 But notice the crane. Stasis is of course unsustainable; change is inevitable even in Paris, even for me.

Especially when in that beautiful but cramped city you have Tasha, a young hunting dog built like a professional athlete and requiring similar levels of exercise.

With The Linebacker, as David calls her, I have been forced to adapt my routine. It started in February with extra mid-day walks to the lawns in front of the Tuileries, where miracle worker Koffi oversees the large pack of dogs in his care, as well as hangers-on like Tasha. Since September I have also been dropping off Tasha twice a week at the place du Marché Saint Honoré, whence she leaves with Koffi et Compagnie to the Bois de Boulogne for four hours of frolicking. I've found it's pretty good for me too. We run over there and I continue my run through the Tuileries on the way back. I'm not quite as fit as Tasha but getting close. 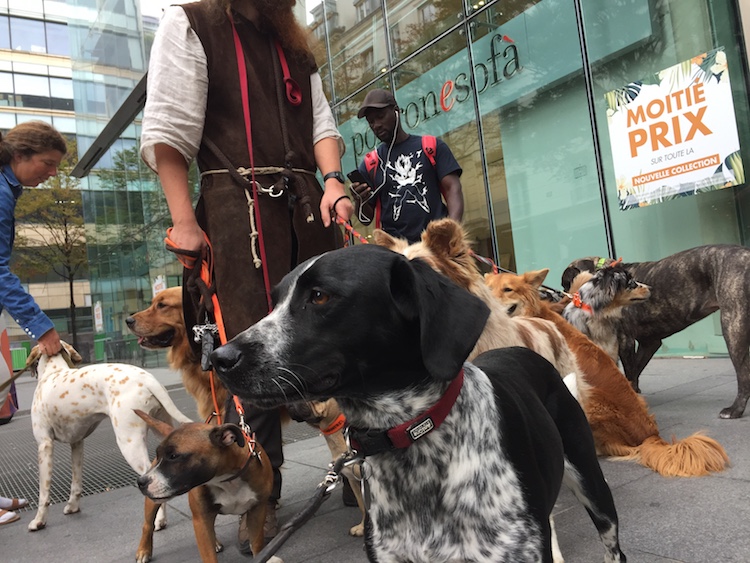 anxious on the first day, with Virginie, Nathan and Koffi 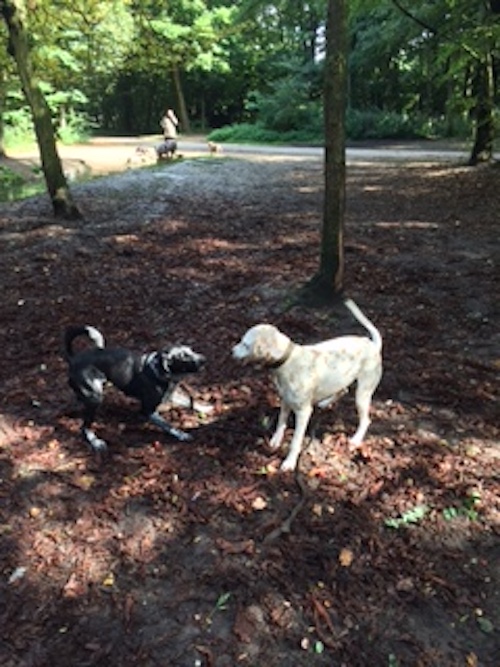 with Malice. Not so bad after all

It has also meant extending my walks beyond the Tuileries, to other places where it’s safe to let an energetic dog loose. Often where there's grass... 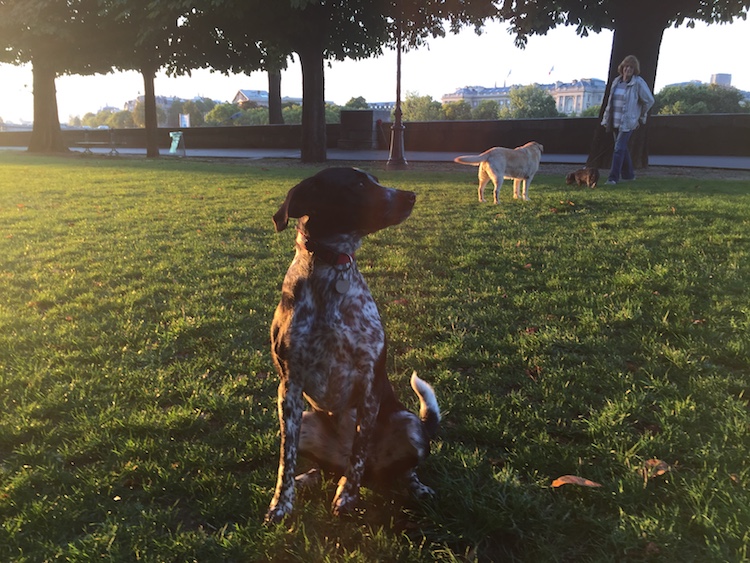 ...with friends Colleen, Mousse and Nathaële... 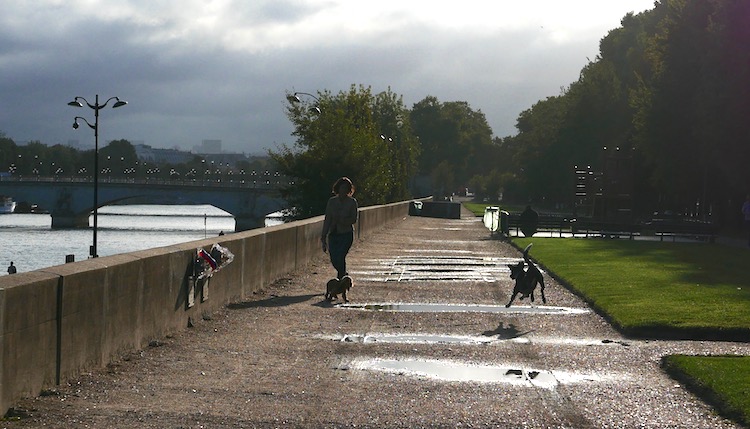 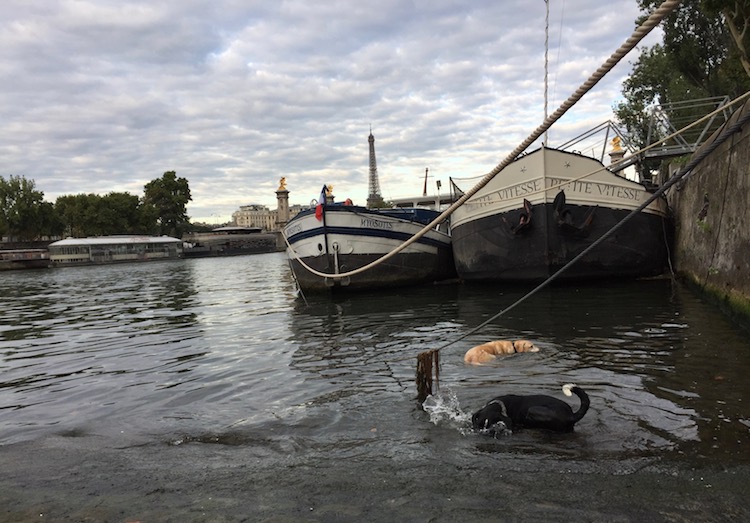 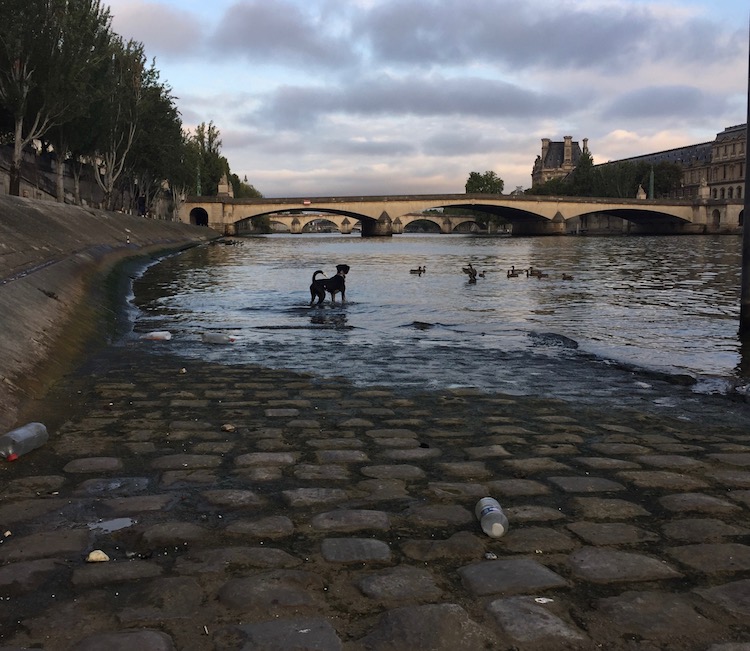 But what to do on weekends, with no playmates, no trips to the Bois?

In 2013 then mayor Bertrand Delanoë transformed 2.2 km of express road on the left bank between the Musée d'Orsay and the pont d'Alma into a pedestrian zone. At the time change-averse me thought it was a terrible idea and complained vociferously. All that traffic, I cried, will come up and further jam the streets--of our quartier no less!

Since September, however, this 'terrible idea' has proved my saviour. I have discovered you can actually keep going much farther along the Seine. Saturday morning Tasha and I run and walk to the pont Bir Hakim, then cross over and run-walk back on the right bank where there's another long stretch of quayside closed to traffic. Though this cobblestone path, along which houseboats are parked, has been closed to traffic forever, it's new to me. 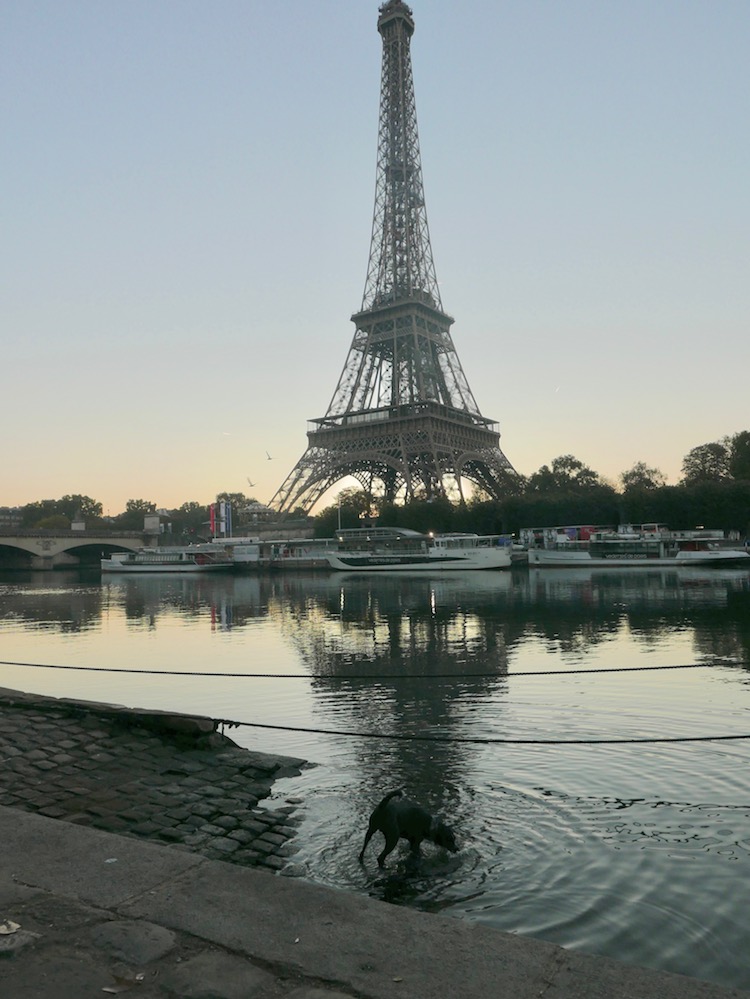 the Eiffel Tower from a new angle

On Sunday I take my bike and we go the whole 5.5 km, almost all the way to the périphérique.

A year ago the current mayor Anne Hidalgo turned a 3.3 km stretch of former expressway on the right bank into a pedestrian zone too. Though this has definitely caused more traffic and pollution in our quartier, I'm keeping quiet.

Paris is changing and I'm trying to go with the flow. 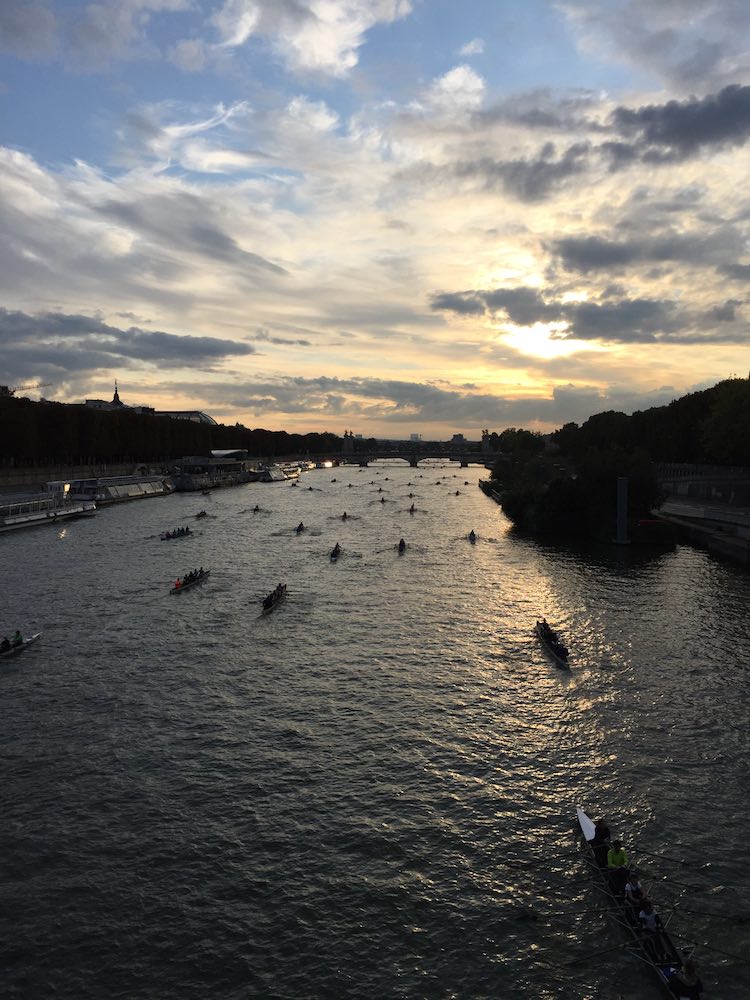