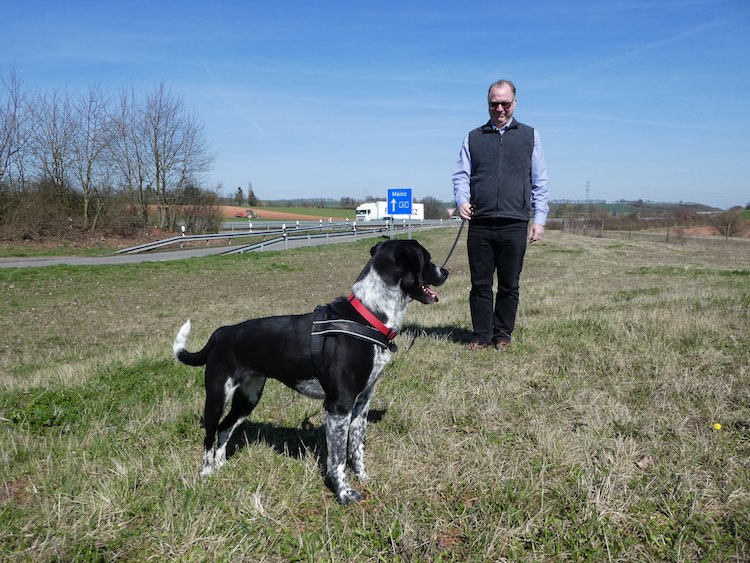 Usually I return to Berlin with a certain eagerness. There are so many elements of our life there that I like: our lovely apartment, the park and woods nearby, the scarred streets that hit me like a jolt of electricity after the graceful boulevards of Paris.

But not this time. This time I was full of angst and foreboding because Mademoiselle Tasha, aka la Terreur des Tuileries, was in the back of the car. As I wrote in my last blog, she is a dog who is not at ease in the outside world. And to make sure I didn’t forget that, she lashed out at a co-canine the very morning of our departure when I took her for a last run in the gardens. So how on earth was I going to manage in a city with 250,000 dogs, all obedient as soldiers in the North Korean Army? And how was this traumatised dog going to react to another home, more change? Our dear Elsa, who by then was very well-adjusted, freaked out when we took her to Berlin.

For a start Tasha does not like the car. Even though it has rescued her from the SPA and driven her to several exciting walks in forests near Paris, she acts as if we were locking her in a cage in a dank basement. She liked it even less this time when her space was reduced by the stuff we always seem to be transporting. I can't say I was much happier. The clear sky did not cheer me, nor did the relative ease of travelling truck-free on a Sunday. Not even this funky service area in the former east Germany, normally a place that would stir my hopeless nostalgia, lifted my spirits. 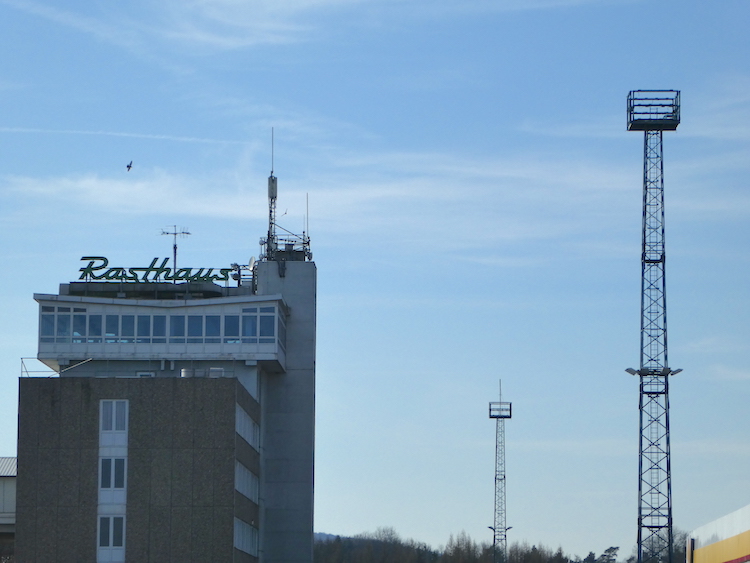 We got to Berlin and at the house anyway Tasha didn’t seem fussed. She settled easily on her bed and stayed put all night. Unlike me. The morning walk loomed like the first day at a new school.

Come 7.30 off we set to the next-door Treptower Park. After a few minutes and not a soul in sight on a vast stretch of lawn, I let Tasha loose. She sniffed... 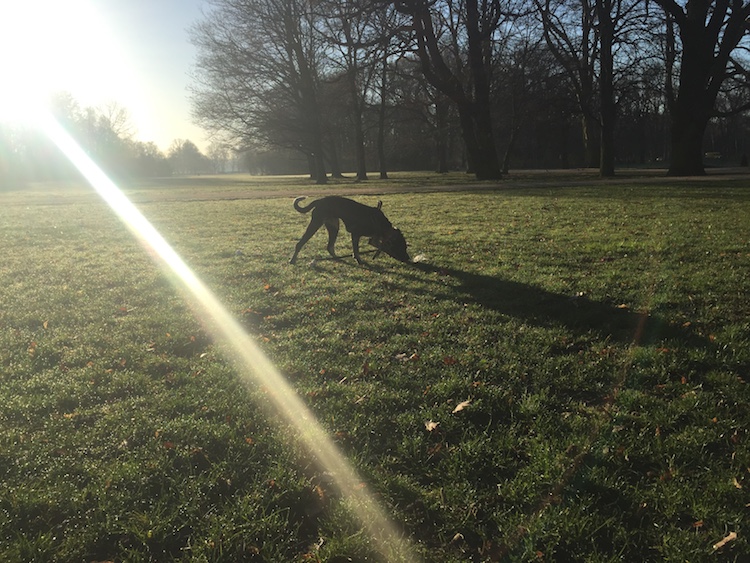 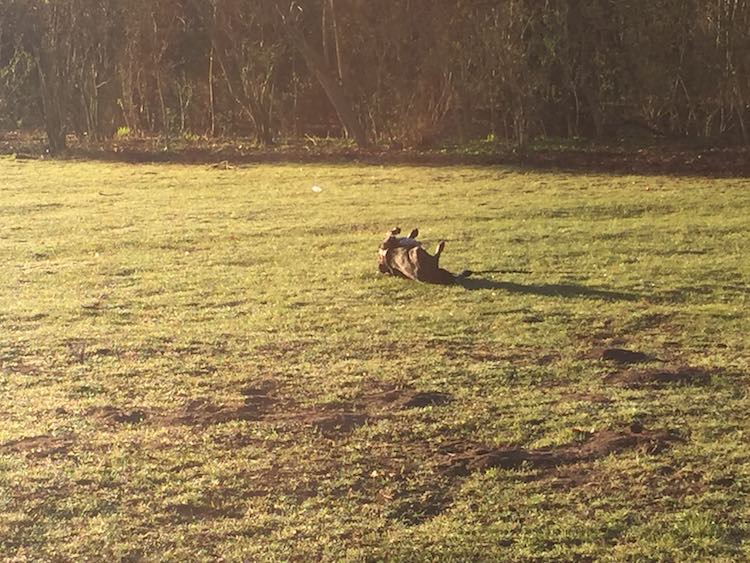 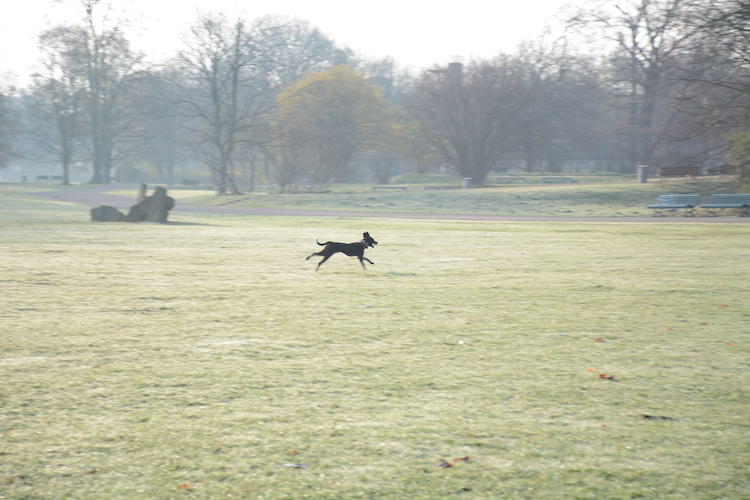 ...and left a gardener alone when I instructed her to do so.

But the test of joggers and other dogs was yet to come. We crossed the Puschkinallee. At first no one, just lots of brush for her to run in and out of, round and round in, on the scent of birds, squirrels or foxes, of which there are many in Berlin.

But then they came…and nothing happened! She had more important things to do than antagonize silly humans exercising. 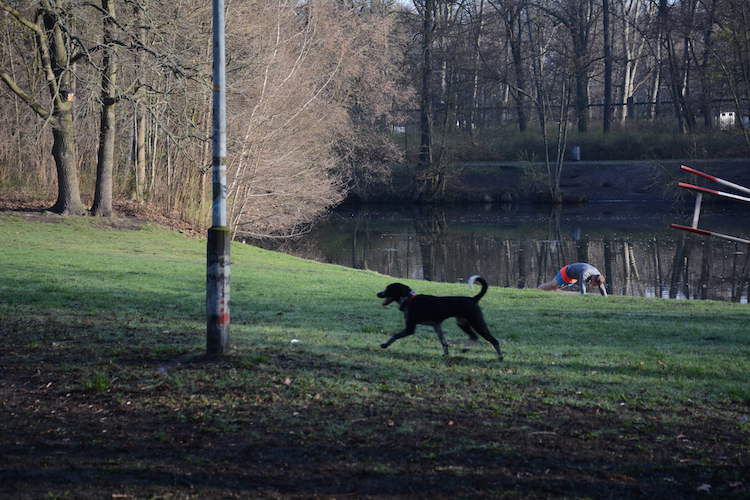 Even with other dogs there was none of her usual ill-mannered or aggressive bounding and pouncing. She approached and departed politely and didn't even bark when the owners were male. 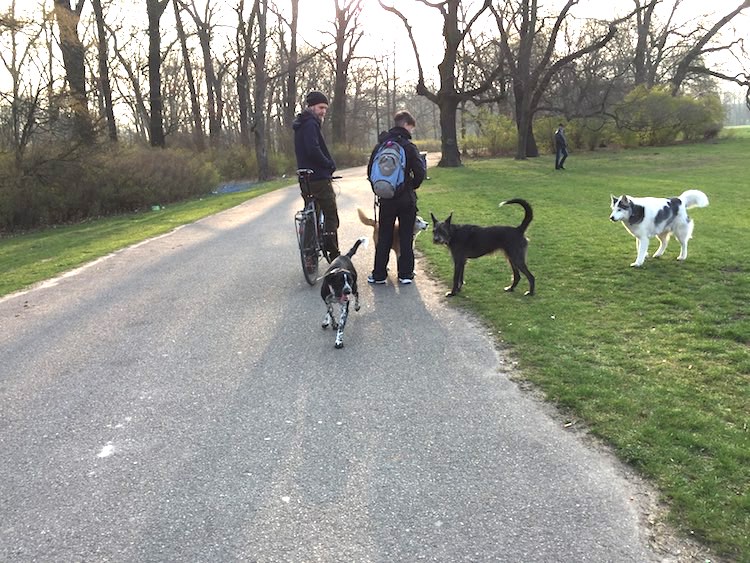 In the only sticky moment this whole week, it was Tasha who was attacked. She was the one to scuttle away whimpering. When the owner apologized, I wanted to throw my arms around him in gratitude: finally, my dog has been taught a lesson! Finally she is not the trouble maker!

We have been running in the woods. No problem. 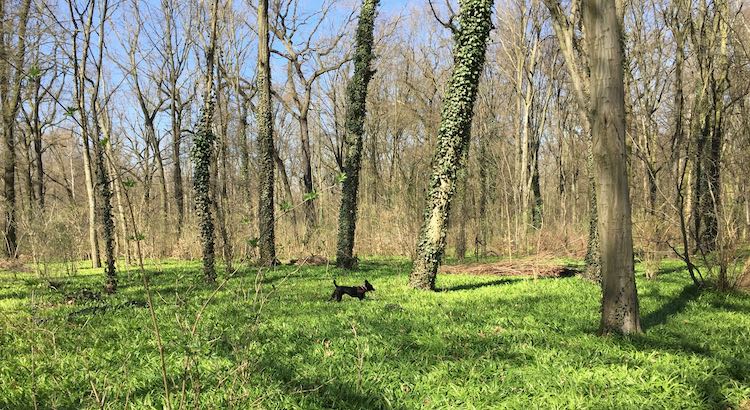 a romp through the wild garlic

To my astonishment even when we crossed paths with this woman dressed up as a chicken, no problem... 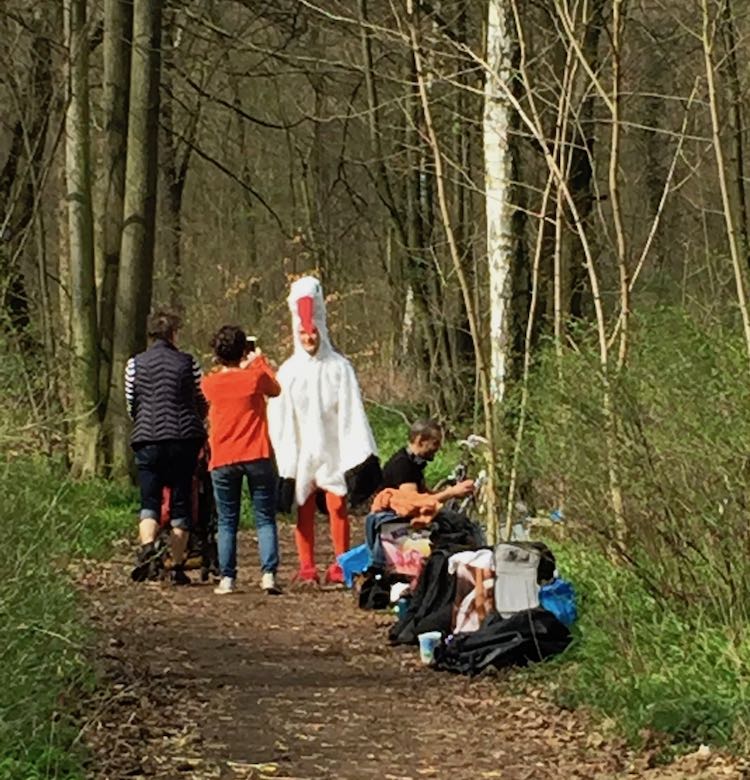 We have met the neighbours and their new puppy. No problem. 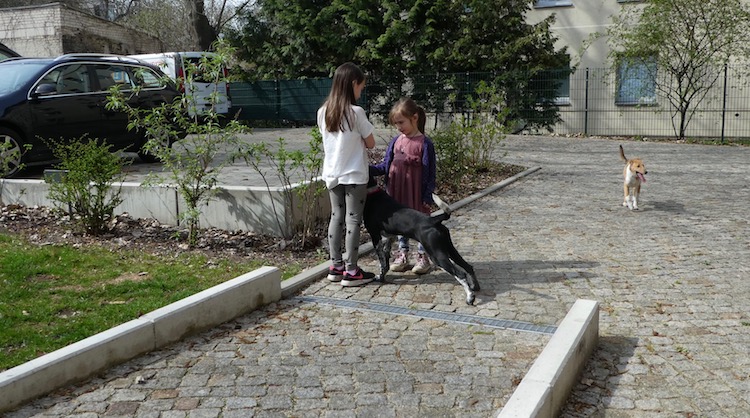 Oh, and I can't forget to mention that since we arrived in Berlin she appears, plötzlich, to be housetrained. No problem.

What’s happened? Does French Tasha sense that in Germany she’d better buck up? Or has this mystery dog from the north of France discovered lost Germanic roots and feel she's come zu Hause? Tell me this German short-haired pointer doesn’t look like a brown version of Tasha: 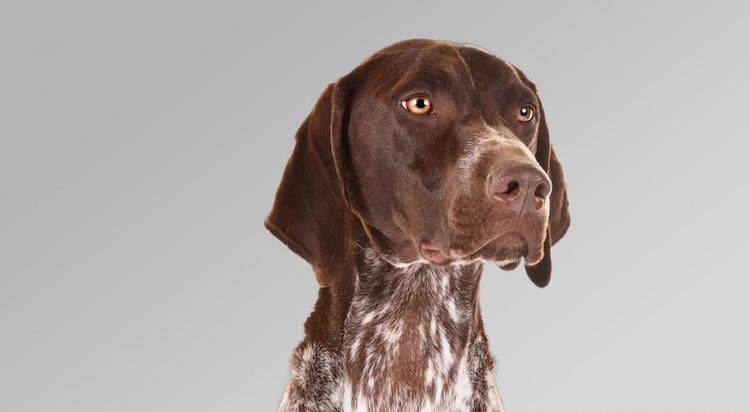 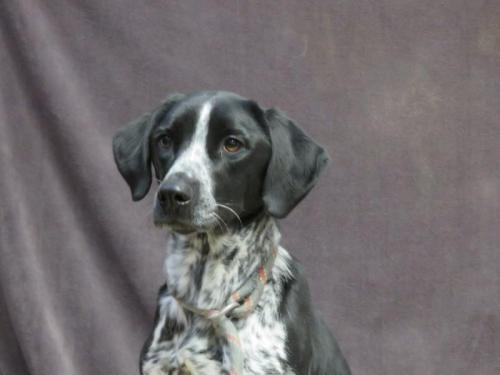 Beyond possible sociological and genetic explanations, there are also matters of geography and philosophy. Tasha needs a lot of space and believes she has an inalienable right to move freely within it. The Treptower Park, which measures 88.2 hectares (218 acres) and is almost entirely open to dogs, provides just that. The Jardins des Tuilieries, on the other hand, measures 25.5 hectares (63 acres) and most of it is strictly off limits to canines. 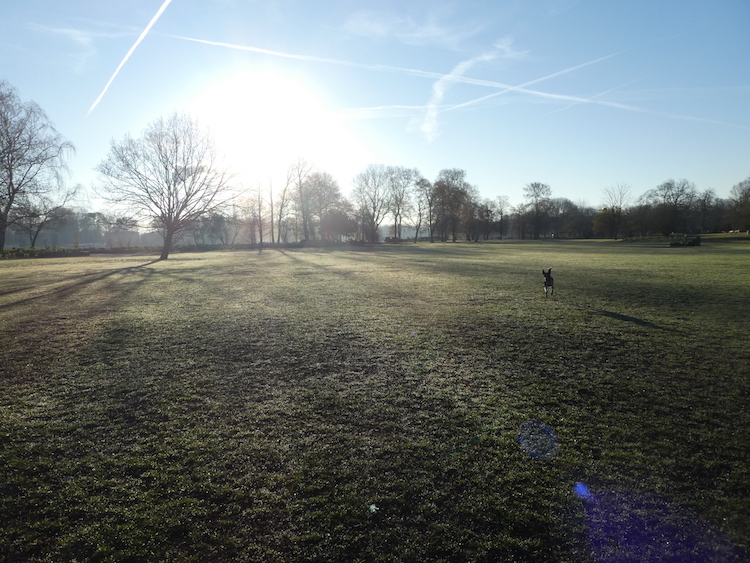 The picture is not all sunny. Though walks have become infinitely more enjoyable, I remain on my guard. The more familiar she becomes with her surroundings, the bolder (read less obedient) she is. In the street, on her lead, she still barks at other dogs, at skateboards, at scooters. I believe she still needs a trainer.

But progress has been remarkable and she is clearly not suffering from any adjustment anxiety. This morning when I walked into to my office to start this blog, there she was, rubbing her bleary eyes on my chaise longue. I apologize for the poor quality of this photograph but it was still dark and Tasha had to be informed immediately that her inalienable rights do not extend to our furniture. 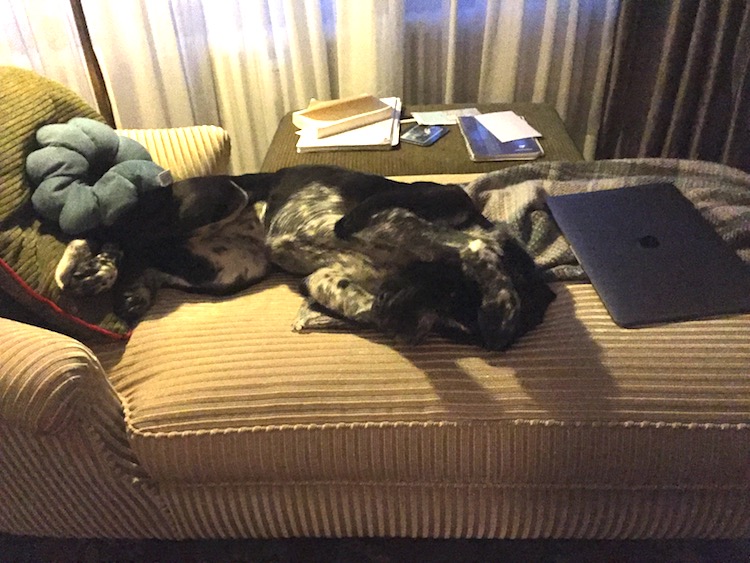