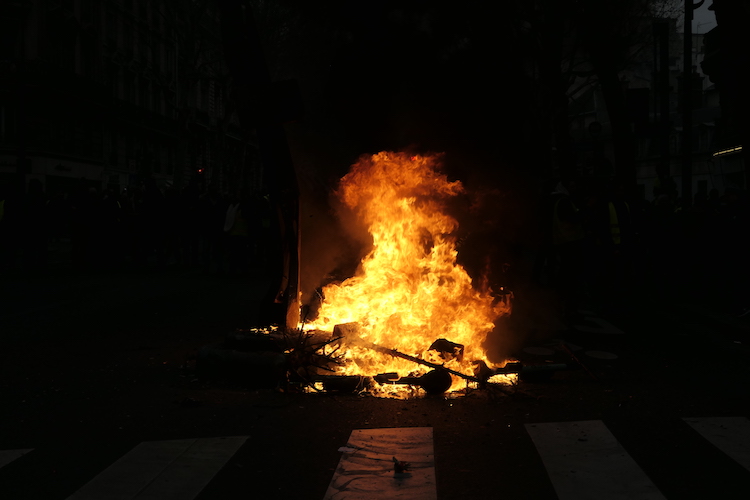 Exactly one hundred years ago, January 1919, W.B. Yeats wrote his most famous poem, The Second Coming. It's the one where he talks about things falling apart; the centre not holding. About the blood-dimmed tide being loosed upon the world. I’ve cited or referred to it before. The message only seems more relevant this January 2019.

A new pedestrian area opened recently not far from us in central Paris. Tucked behind the boulevard Raspail, the rue de Grenelle and the rue du Bac, Beaupassage is a haven from traffic and is indeed beau.

Perhaps because I’ve been in Berlin and paying less attention to Paris, it came as a complete surprise when I stumbled upon it just after the opening. I’d noticed work going on these last years but had no idea to what end.

Upon entering, it is impossible not to be impressed by this space adorned with trees and protected from street noise that is attracting flâneurs back to what had become a moribund quartier. To marvel at the way the architects have highlighted the old architecture... 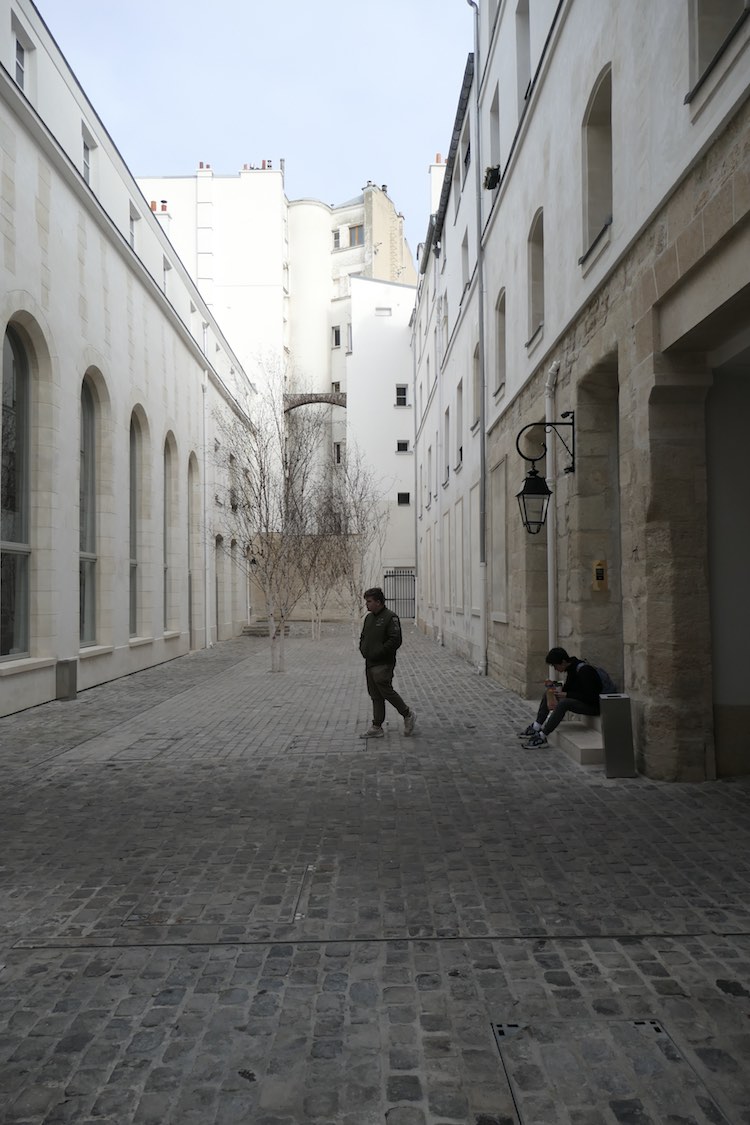 ...and tastefully integrated the new... 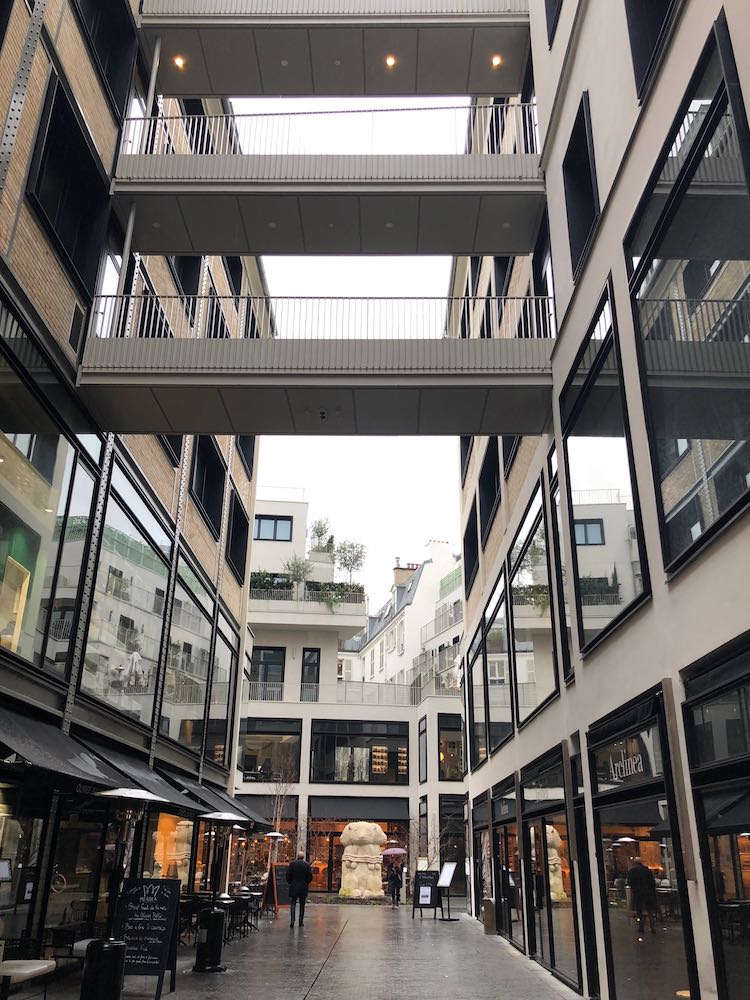 To pause for thought at the wall sculpture, a vast forest landscape made of cardboard by Eva Jospin, daughter of a former prime minister. 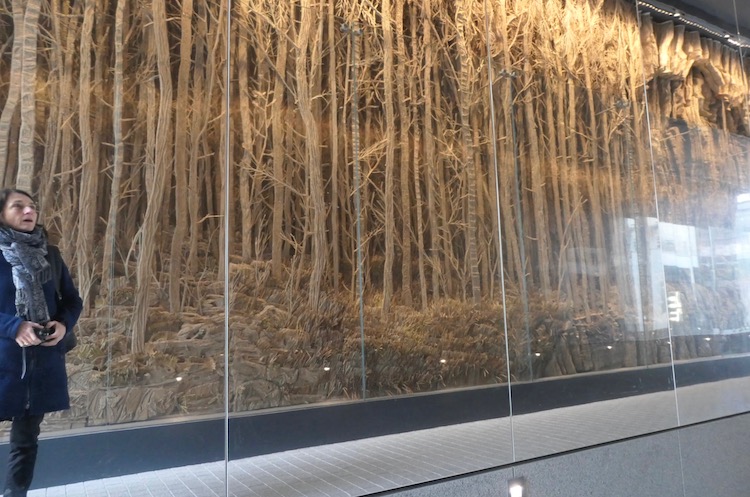 To gawk at the fancy restaurants and the swanky butcher, baker and fitness centre.

But my wonderment was tempered with regret, even a degree of indignation. Until the high-end property developer Emerige got a hold of the space, the rue de Grenelle side housed a large Renault garage that serviced first our Grand Espace then our Mégane on many occasions. I walked through what used to be a door at the boulevard Raspail entrance countless times, on my way to and from the slightly shabby activity centre where my children took ballet and judo and chess classes after school. I used to visit a friend, an illustrator of children’s books, in her studio flat, until the rent (in preparation for the development project, I now realize) was raised through the roof and she had to move. It has become part of the Beaupassage's luxury living apartments. Until not so long ago there was a horse butcher in the rue du Bac; today you could feed a family of four on what it costs to buy a slab of chocolate there.

Okay, the centre of Paris, at least the 7ème arrondissement, has always been upscale, but until 15 years ago you could get your car fixed, broaden your children's minds or visit friends with limited means. Then it got hollowed out. Now it’s an enclave of chic shops and restaurants for the happy few who can afford them.

Last Saturday I looked out our living room window and saw this: 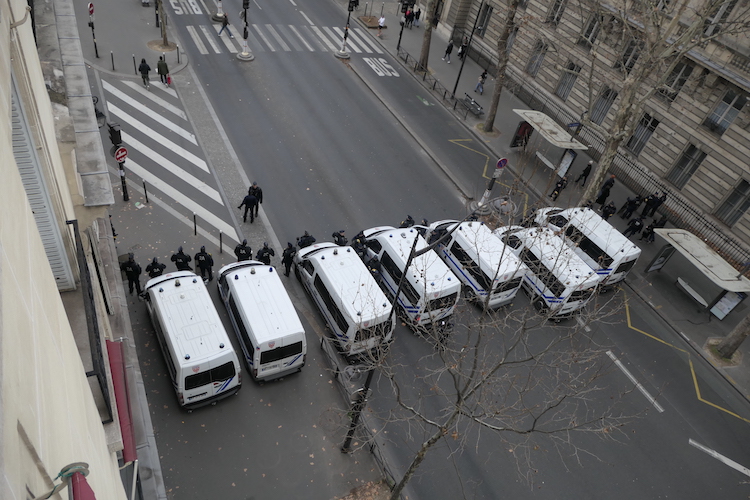 The CRS, the reserve police who are called in for all gatherings of civic unrest, had formed a blockade at our front door to stop the les gilets jaunes from storming the National Assembly around the corner. I ran downstairs to have a look. The protesters were amassing on the footbridge I cross every day with Tasha... 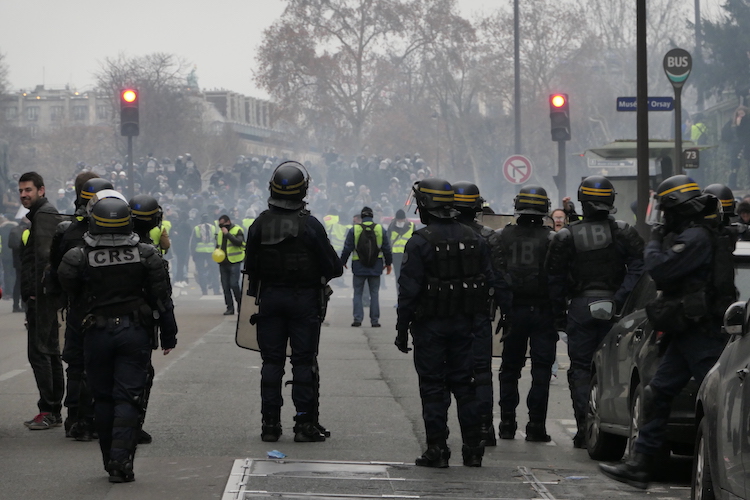 ...crowding the esplanade of the Musée d’Orsay (visitors were evacuated)... 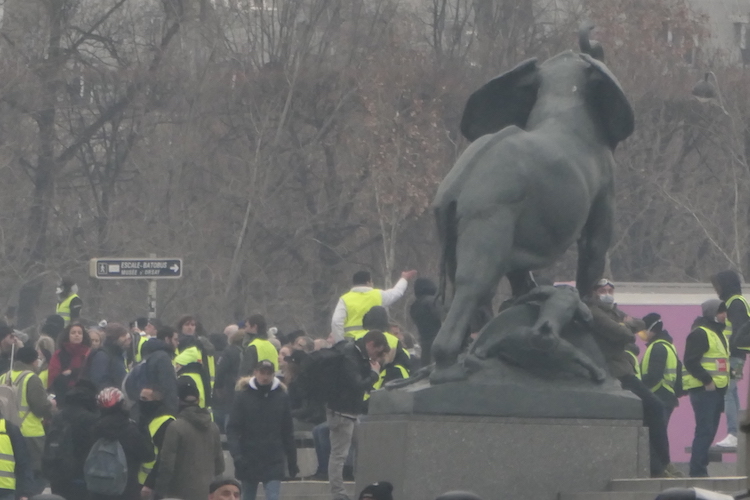 and starting fires in the boulevard Saint-Germain... 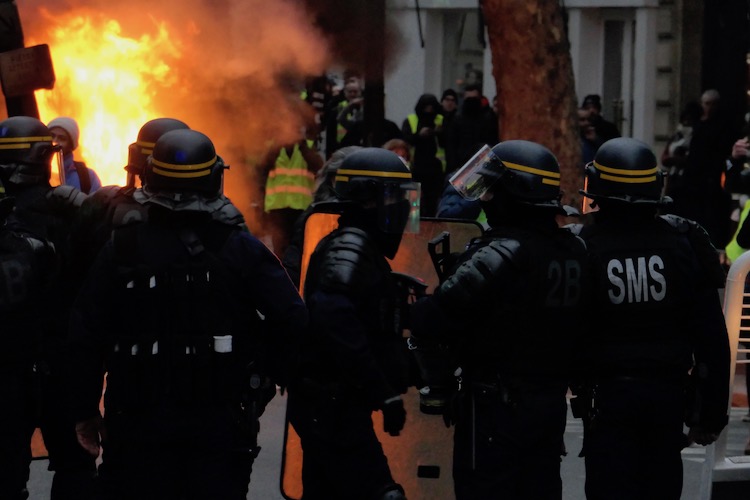 ...while shopkeepers either closed up or looked on... 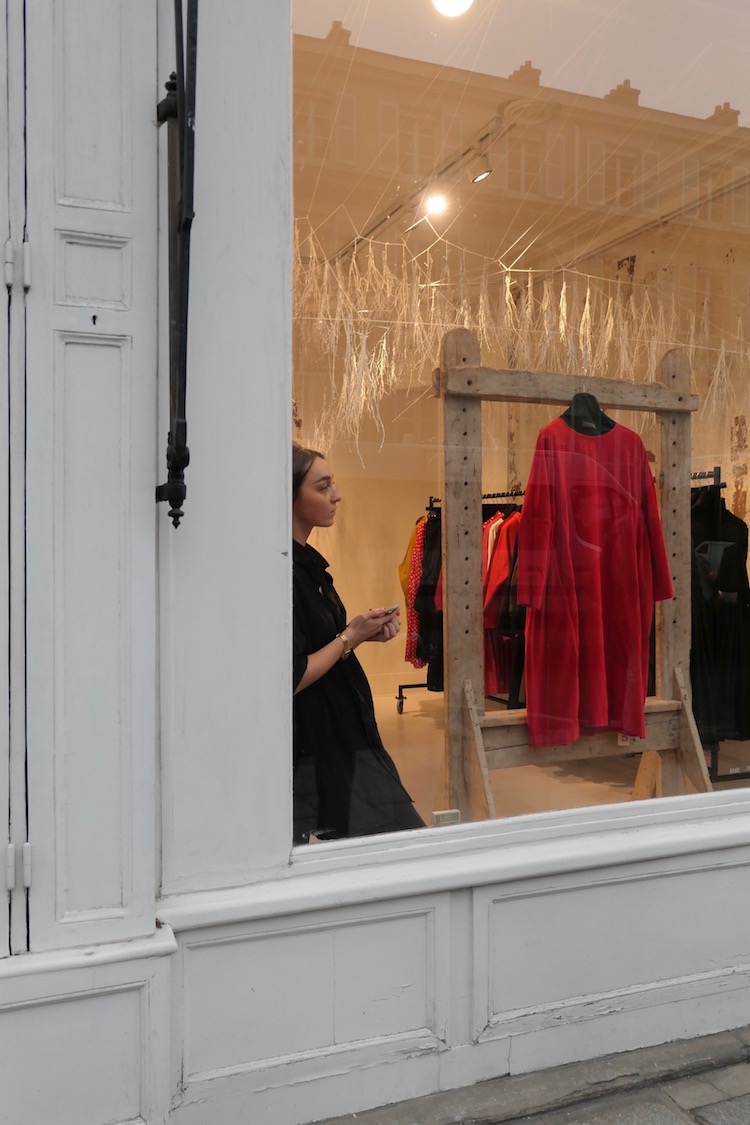 Les gilets jaunes are an amorphous, multifarious bunch. They started as individuals legitimately protesting a fuel tax that disproportionately affected them and morphed into a more general, many would say unreasonable even sinister, movement. Standing at their edge, you feel that blurry nature. Who is protesting and who is just watching is not clear. Varying motivations are on display. 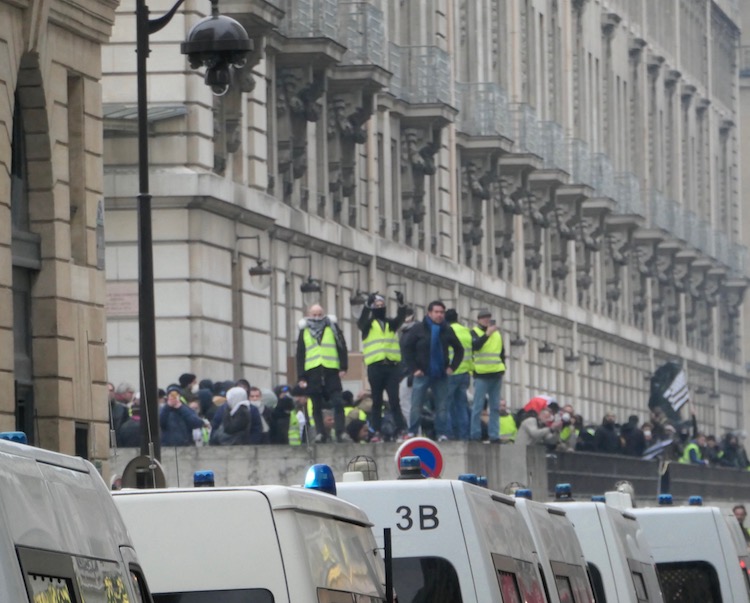 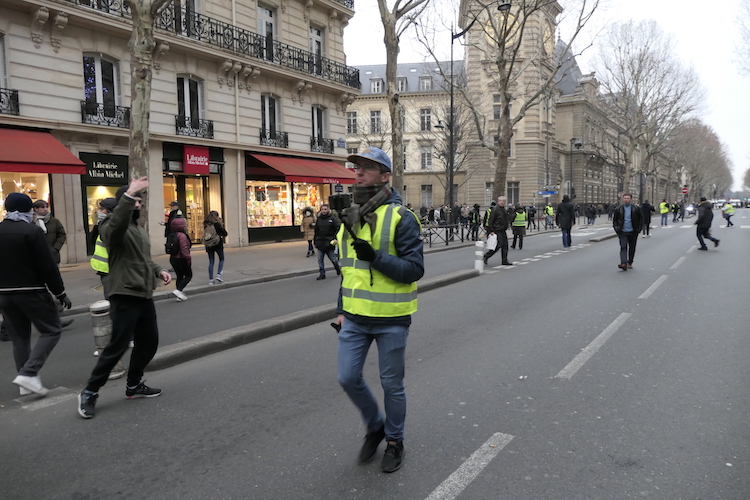 a selfie opportunity not to be missed

Les gilets jaunes are on everyone’s lips. I overhear conversations about them between people on the street and in restaurants. Shopkeepers, who have suffered crippling losses, can talk of little else. But it’s my friends who have surprised me. Their stances, on both sides, are full of passionate intensity but short on empathy.

Two of my fellow dog-walkers, for example, are ready to get out of the euro and the EU and bring down the government. “The elites are all in bed together. They keep asking us for more and more and we get less and less in return. The whole system needs to be demolished,” says my usually mild-mannered, tolerant friend. She is ready for rule by referendum, about as close to mere anarchy as you can get.

On the other side, even some of my gently left-leaning friends are enraged by the movement. To their mind France is already a generous state. Healthcare and education are practically free; subsidies for housing and families abound; unemployment benefits are prodigious. And every year we get five weeks paid holiday. Furthermore, these friends point out, if les gilets jaunes succeed in overturning the government and making the economy tank, they will suffer first and foremost.

Well beyond the limits of the 7th arrondissement, you can see people, many young, many whose parents were born elsewhere, who are doing just fine for themselves in this system. They live, eat and laugh in revitalised neighbourhoods near République and Nation. Just look at a list of those gunned down by terrorists on the 13 November 2015.

But take the Métro to Saint Denis or read about towns and villages in deeper France, as I recently did in Retour à Reims and En finir avec Eddy Bellegueule, and you’ll see that vast swathes of the population are not flourishing; they have been left on the other side of an increasingly visible barrier. Meanwhile the middle ground, the centre that holds us together, has been lost, pretty much any way you look at it.

To know this is true, all I have to do is look out my window. 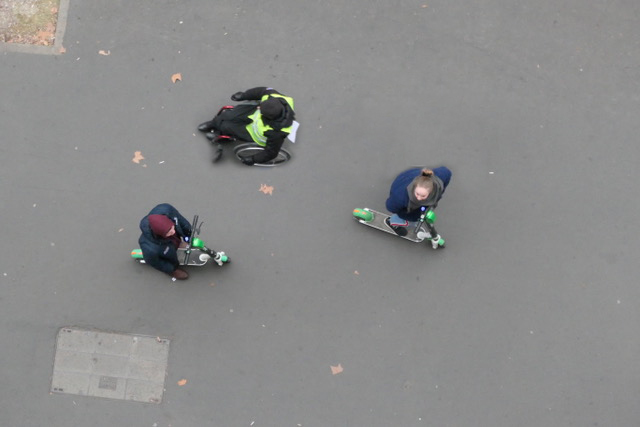