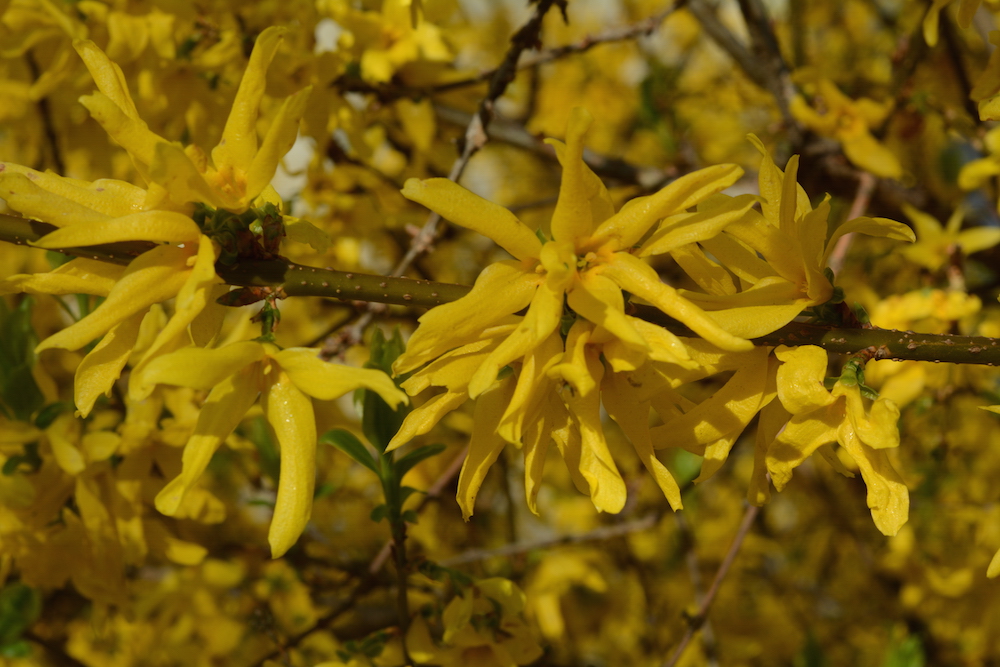 In Proust's Du côté de chez Swann, the narrator describes a critical encounter with a row of hawthorns. This is a short blog posting, so I won’t quote extensively from this predictably lengthy passage, except to say that still a boy, he stood before them “as one stands before those masterpieces of painting”, trying to “shape my fingers into a frame, so as to have nothing but the hawthorns before my eyes.” This being Proust, their essence remained elusive, but the experience was profound and of course lasting.

My hawthorn is forsythia, another riotous harbinger of spring, and since the last two years we have had our April in Paris, I am seeing it for the first time in Berlin, everywhere I walk or bike, thus triggering a couple of my own little Proustian moments. 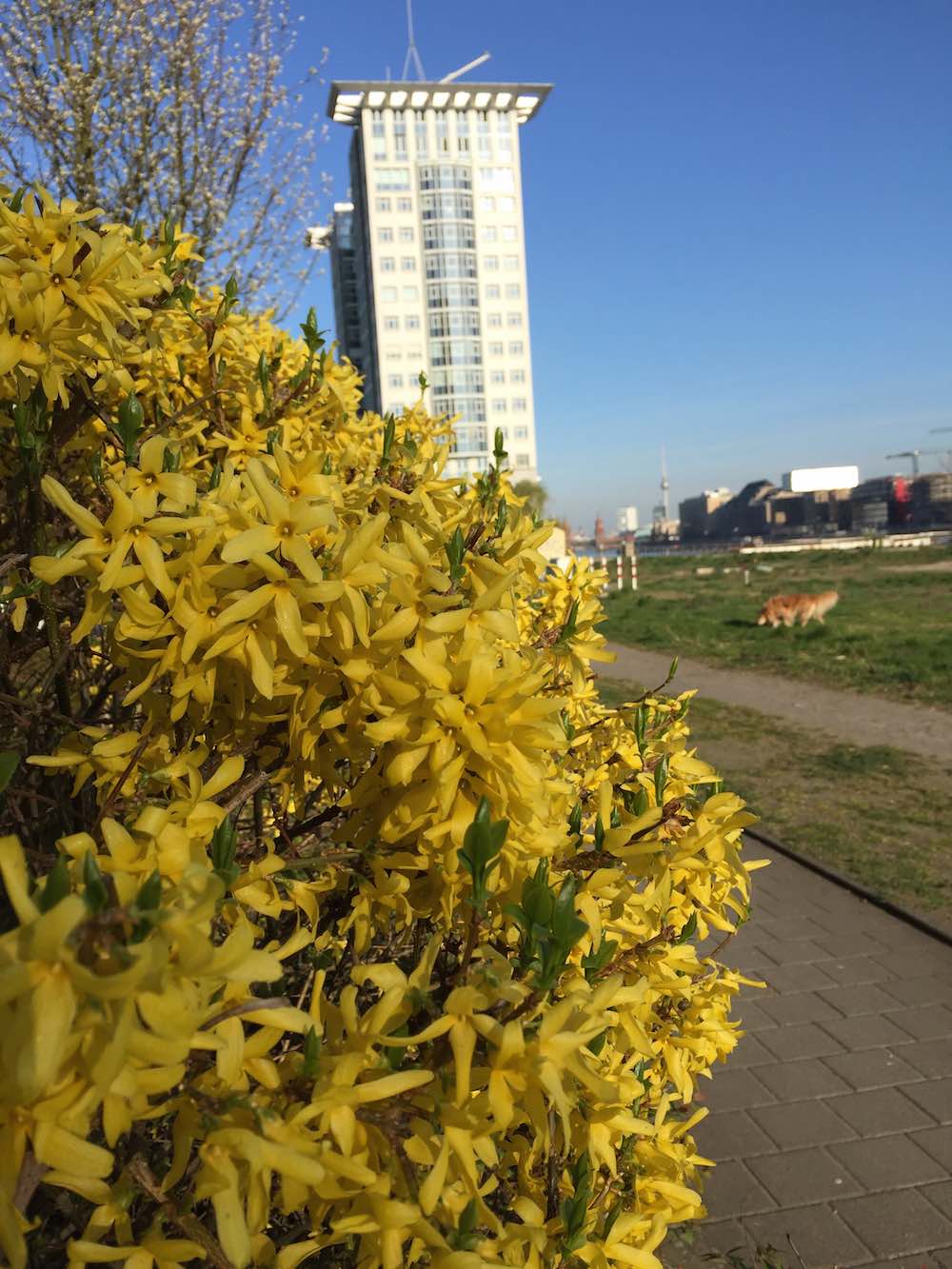 If there was any forsythia in Lincoln Park when I was growing up, I don’t remember. And even once I was at school in the countryside of Connecticut, it only came into focus, with a name attached, late my last year. It was a Saturday morning and I’d been feeling really glum, as was so often my wont in adolescence. Suddenly there was a knock at my door and in came the housemother, Mrs L. My first reaction was panic because I’d just smoked a cigarette (almost graduated and now serious disciplinary trouble!). But she made no mention of the smell (those really were more forgiving times), just proffered an armful of yellow flowers and said: “When I was out walking, I cut these and thought you might like some. They’re such a happy sign of spring.”

How and when and what she had noticed in me, just one of 40, I do not know. But that gracious act of kindness pulled me right out of my gloomy self-absorption and made me feel as warm as the pure yellow that was now adorning my room. The memory of it still stops my thoughts dead in their tracks.

Years later, having taken possession in January of our new Paris apartment, we began renovations on a place that had not been refreshed for at least 40 years. Naturally, the process was as fraught as the one we have just experienced, this earlier one dominated by Monsieur H, who was both the plumber and the mason and who after an initial display of zeal, started showing up sporadically, at best. When our lease ran out on the old place, we moved ourselves and the five kids on the 1st of April into a very unfinished apartment.

With all the other trouble (not even one fully completed bathroom, for example), I had certainly not paid much attention to the small terrace that was littered with old pots, sagging jardinières and lots of dead-plant detritus. It just seemed another headache. But as we moved in, what should emerge from a large pot in the corner of this sorry sight but the brazen yellow of forsythia blossoms. Not all death and bother after all! As with Mrs L’s act of kindness, their survival seemed a great gift. The work would get done; our new life was not off to such a bad start after all. Two years ago (surely no significance it was the same year we moved half-time to Berlin) it almost died but after a severe trimming, it was healthily back last year.

I write now to the sound of drill, hammer and chisel, to a hive of workers right outside my window. The past week it's seemed never-ending but by the time the forsythia returns next year, this too will have passed. Unlike Proust's narrator when he left the hawthorn, however, I shed no tears. Those pert yellow flowers are too happy, too generous a remembrance of things past, of the world that is coming to life again. And after they've faded to an ordinary green, then come the cherry blossoms, with their own set of memories... 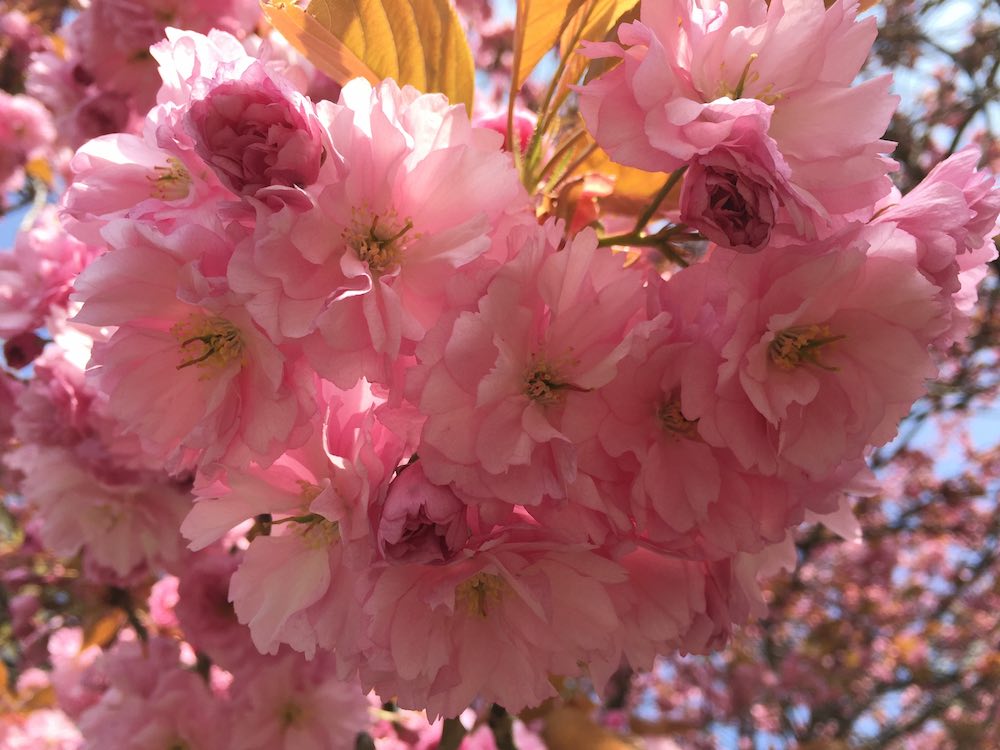