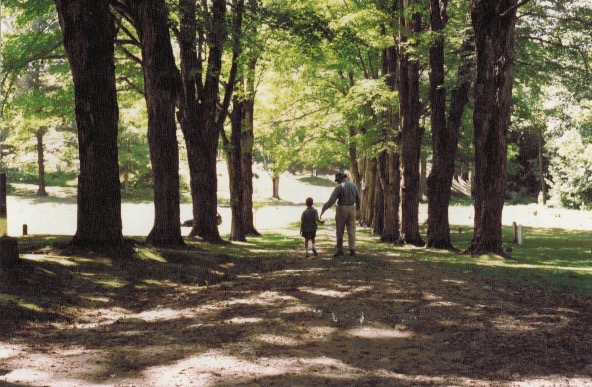 'The unconscious is where most of the work of the mind gets done; it's the repository of automatic skills, the source of intuition and dreams, and an engine of information processing. Fleeting perceptions may register in the unconscious mind long before we are aware of them.' So says the website Psychology Today.

On Monday we returned from eight intense days in the US, four in Florida visiting David’s parents and four in western Massachusetts sorting out my mother’s affairs and burying her ashes. All along the way I took photos. Many photos. Some that I thought were rather good, that I was hoping to include in this blog posting. Some were of my mother's 'personal property' and important to the settling of her estate.

Last night, believing I had downloaded these pictures onto my computer, I deleted them from my camera. But they were not downloaded. All the photos, except the few that I took with my phone, were lost. Not quite but almost as bad as the time I was responsible for taking the photos at my sister’s high school graduation and realized at the end of the ceremony that the film had not caught when I loaded it and I'd been clicking away in a void.

Those had been unhappy years for Catharine; this was a tough trip for us. For a start Florida in summer, when it's refrigerated inside and outside feels like a hot, wet blanket, is never pleasant. 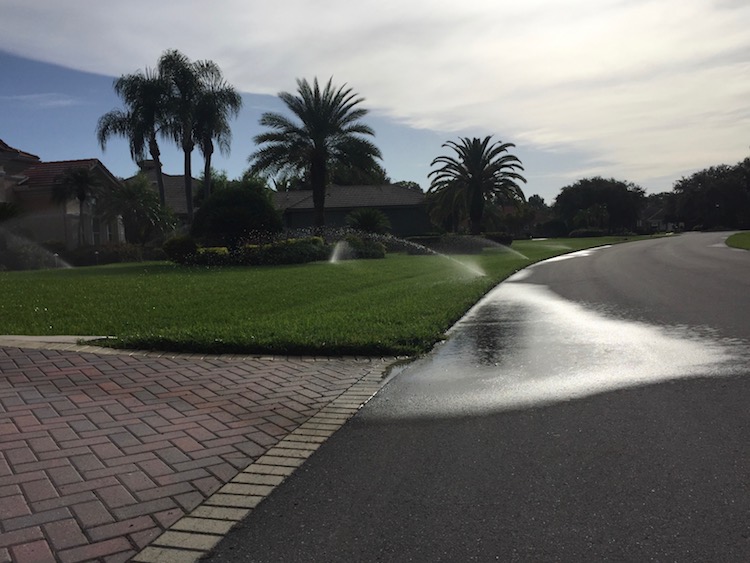 The Hissing of Summer Lawns

We’d actually chosen August for just that reason, because David’s sister Julia and her husband Larry have usually fled the heat to their sailboat on the Great Lakes and their parents are alone at their nearby retirement home. As it turned out, Julia has been fighting breast cancer these last months (very bravely) so she and Larry had remained in Sarasota. Which at least meant she was already in situ when their father fell a few weeks ago and was put in the rehabilitation centre adjacent to their residence.

He was still there when we arrived. What a depressing place. Everyone is in a wheelchair; most are either asleep or comatose. You start to wonder just how long you want to 'live'.

By the time we left my father-in-law was fortunately somewhat better and back with David’s mother in their small apartment. Within hours of his return he seemed more alert, more alive.

In Massachusetts the weather was perfect but we were mostly inside looking out, as we sorted furniture, artwork and lots of memorabilia.

The more I sifted through my mother's things, the more I discovered a person I did not know. Not the 10-or-so-year old child who wrote this cheeky, almost rebellious (for c 1940), poem: 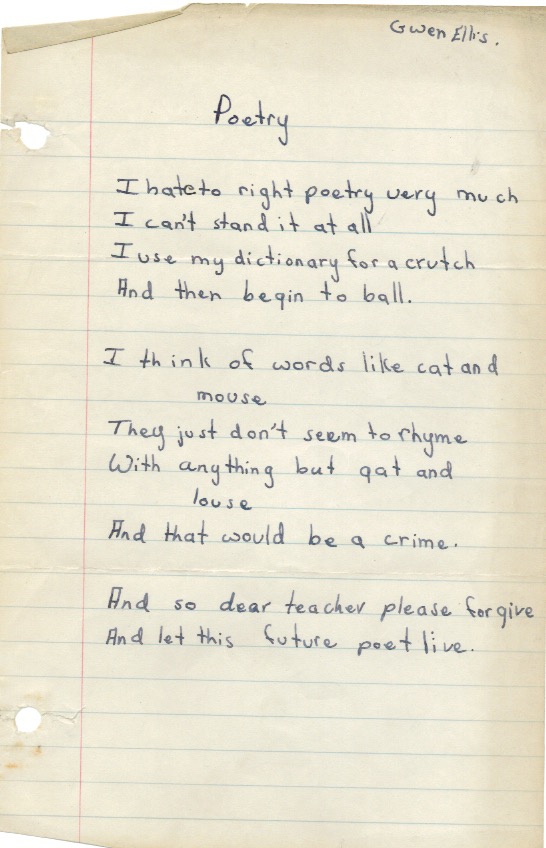 Nor the bride-to-be who was described in the society pages of the Chicago American as ‘a rather serious-minded miss who echews (sic) frivolity’. I never thought of my mother as frivolous but she was always saying what a lackluster student she had been.

Some of the photos even after we were born seemed to reveal a different person. In my memory my mother didn’t like to be touched but here I am at Eaton's Ranch, leaning into her back and pushing down on her shoulders and she’s not exactly squirming. 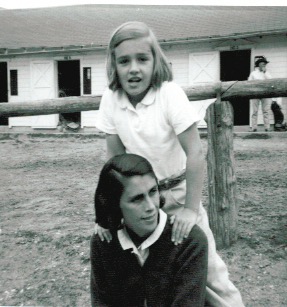 Or here she is with my father. Catharine and I stared and stared at this photo. It’s a smile, an uninhibited gaze that neither of us recognized.

We buried the ashes late Saturday afternoon, dans la plus stricte intimité, as the French would say: Catharine, David and me; Lynn, Arlene, Sarah and Cale, those who had worked for her so long they had become dear friends—'as much family in some ways as her daughters,' Catharine said at the gravesite. There was just a small hole in the ground for the urn, to the left of my father’s. The gravediggers were waiting at a discreet distance to fill it up after we’d finished.

The next morning I returned to see the grave plugged up, the finished product, so to speak. I also wanted to see the cemetery itself one more time. Built on top of an ancient Indian burial ground, the New Marlborough Cemetery is a beautiful and tranquil spot that I have been visiting for years, even more regularly since my father died in 2006. 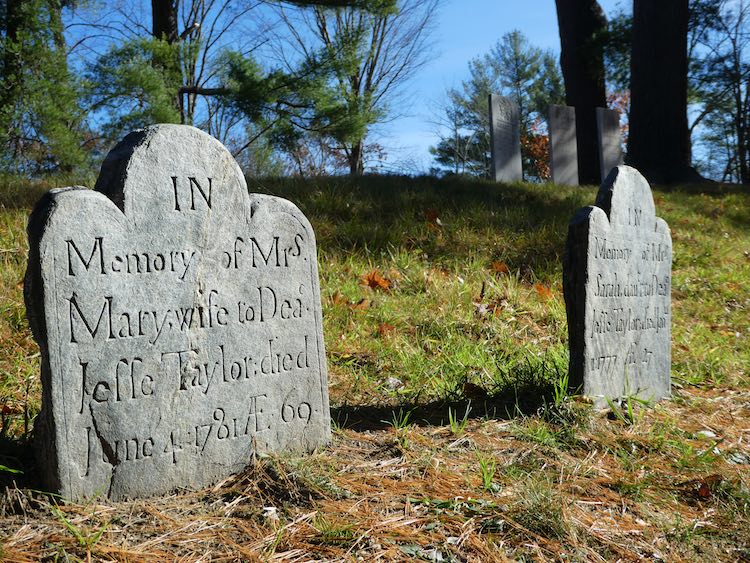 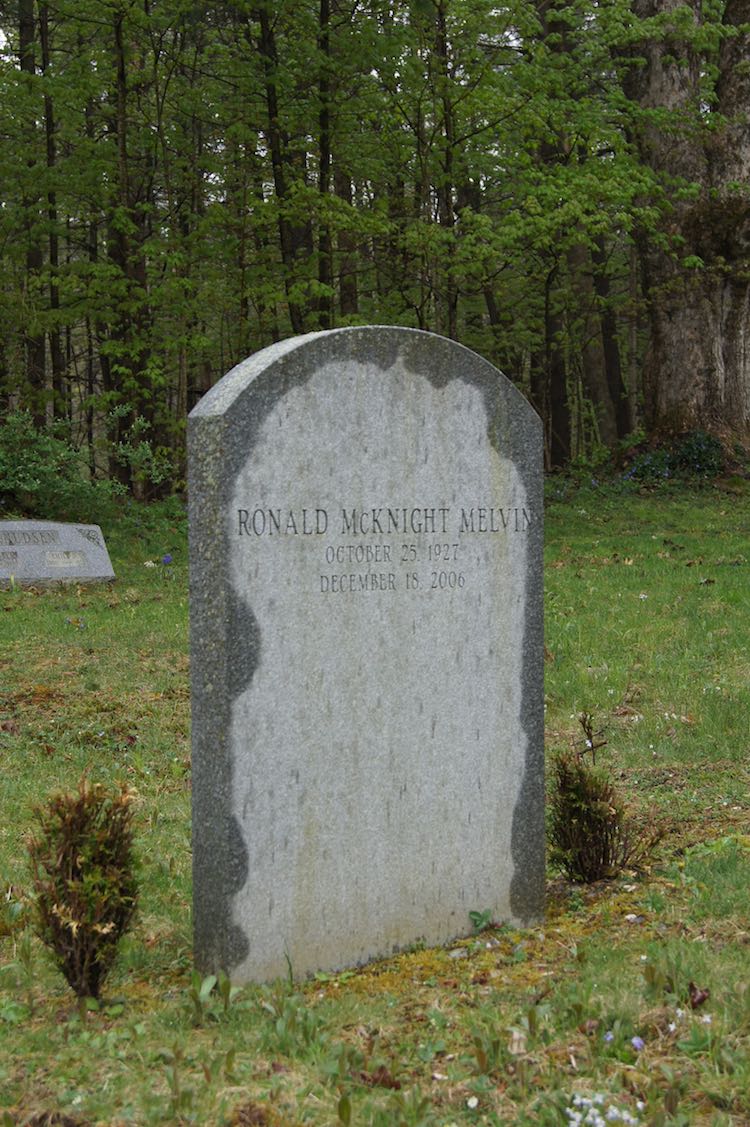 Though it's surrounded by deep woods, I had never seen a living creature. But that Sunday morning a deer turned and looked at me, before leaping gracefully, silently into the forest. Then a second one bounded away, its cotton white tail bobbing between the trees. Five minutes later the sun rose higher and left this shadow on their grave. 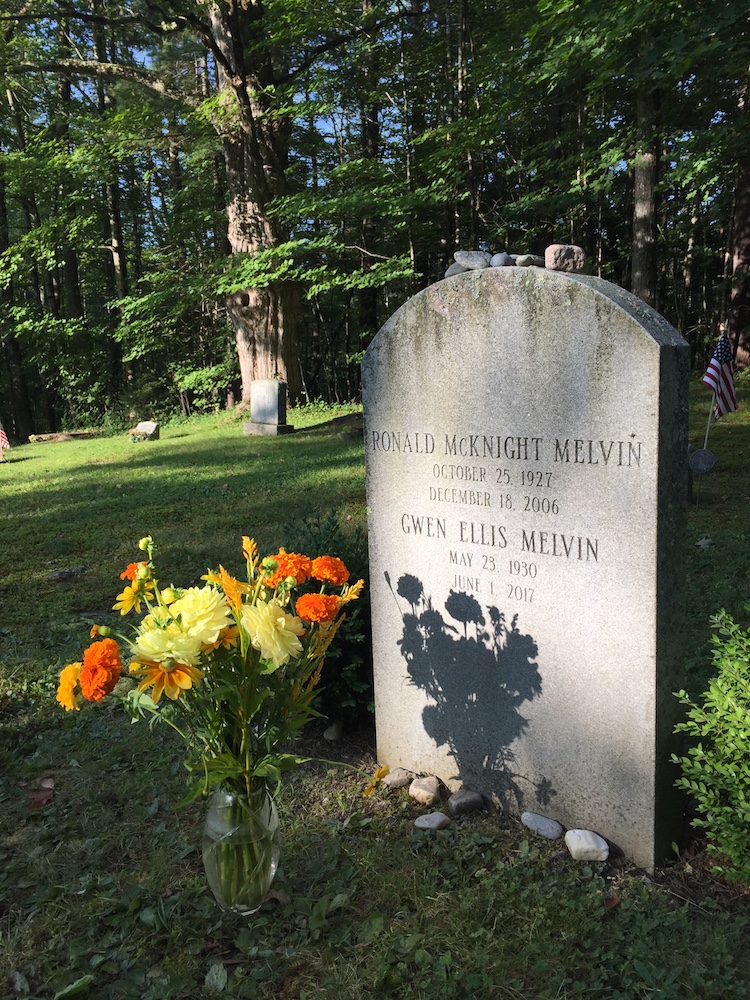 It felt like a good-bye from my parents’ departing souls.

When I accidentally deleted those photos, I don't think I wanted to erase the week. We had a lot of laughs with Julia and Larry, with Catharine. Sobering as it is to witness the very old, especially clustered in one place, it was an edifying reminder of what may lie ahead for us all. While putting my mother's life in order and burying her remains was painful, it was also a tender, bittersweet moment. My unconscious was, I think, sending me another message: that it's time to move on, enter a new phase, maybe even as a slightly wiser person.

Back in Paris, amidst the post that had piled up while we were in Berlin, there was a card from my friend Charlie T. ‘These are tough passages,' he wrote, 'but your mother will stay with you forever in ways you can’t yet know.’

After this trip, I'm beginning to see what he means.