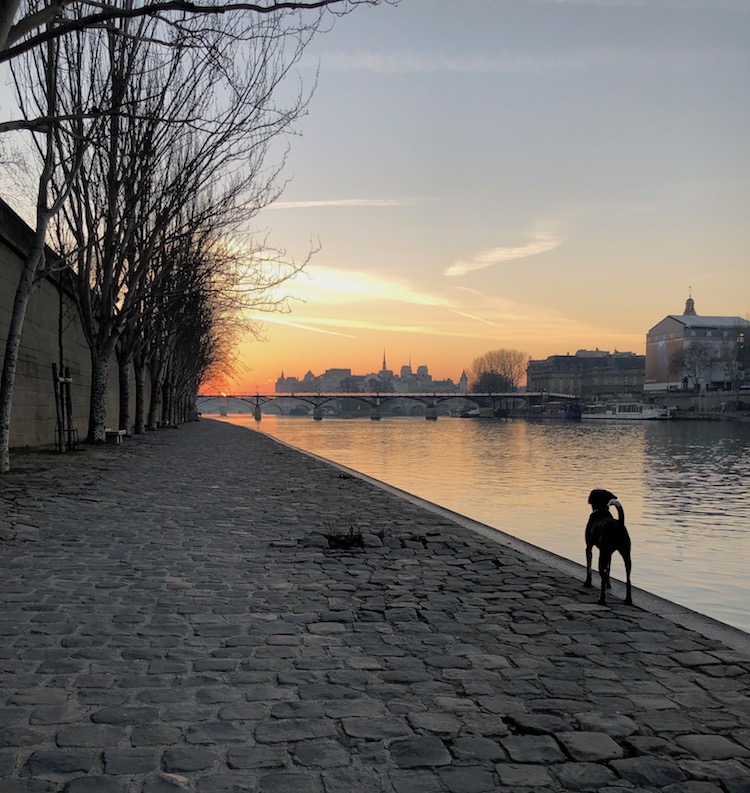 Anything else out there but the rising sun?

If we move Tasha moves, though not always in the same direction. She sometimes has her own adventures.

During our almost constant travelling these last two months, she has spent a lot of time chez Madame P, who over the years has looked after all three of our dogs in her four-star lodgings. The lucky canines in her care sleep inside this lovely house… 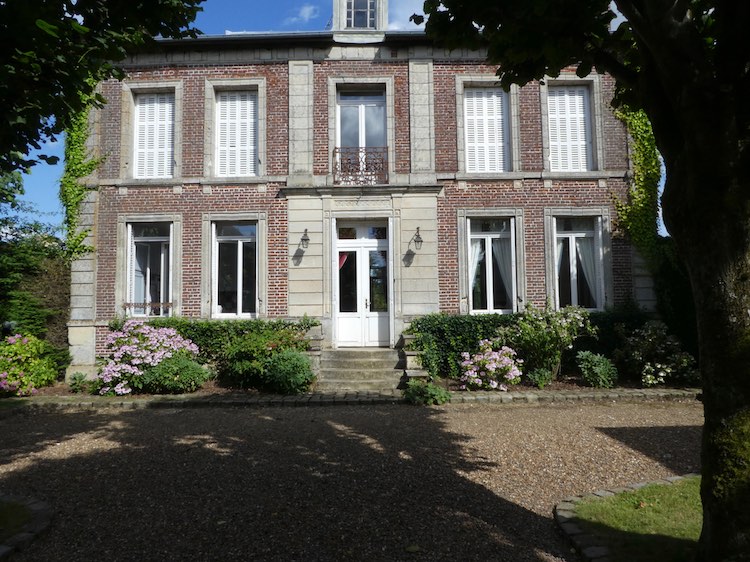 …and run free in the large, walled-in garden at the back. Here, in late January, while we were in dark, dreary Berlin, Tasha gambolled freely in freshly fallen snow. 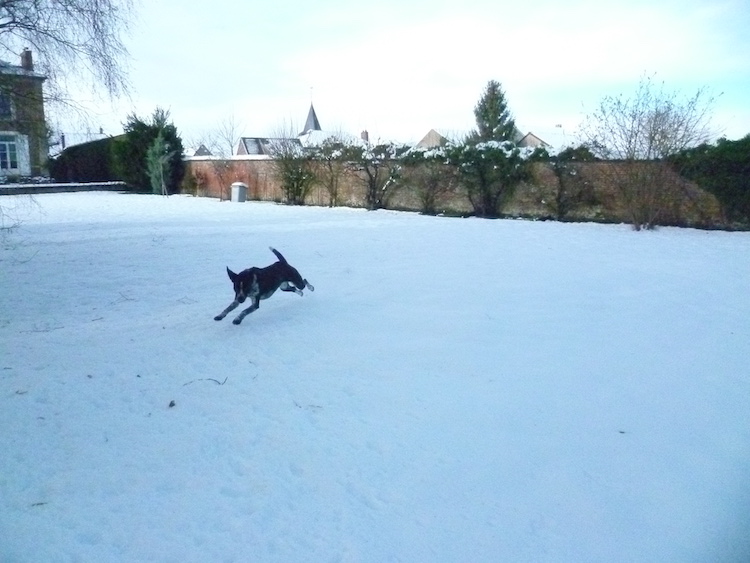 (photo by Mme P)
But beyond the walls of paradise, danger always lurks. A couple of days before the snow fell Mme P, with no other dogs in residence, decided to take Tasha for a walk in the countryside around her house. Not long into the stroll our very strong dog spotted a deer. She lunged, pulled the lead out of Mme P's hand and tore off across a field and into the woods. For 20 minutes Mme P screamed TASHA! and pursued her charge. I wish I had been there. I could have told her that Tasha has done the same thing to us on more occasions than I like to recall. And often for longer than 20 minutes. She does come back but not before many dark thoughts have passed through the brain and much mud has collected on the footwear. 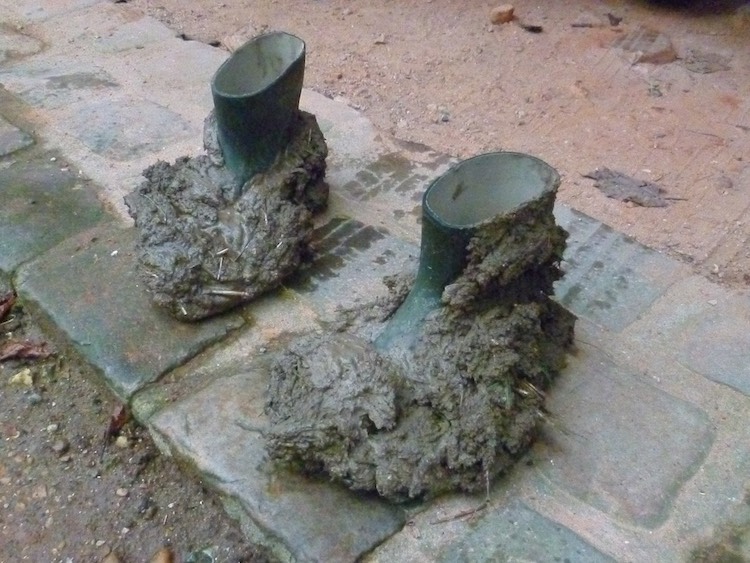 In the end you have to forgive the dog. Whatever breeds were thrown into the mix that came out French Tasha, the German short-haired pointer prevails. She is a hunting dog to her very core. According to Mme P there is actually a theory that while 'working' these hounds lose their hearing. Which is certainly the way Tasha acts: when she sees or smells live prey, the rest of the world melts away. Even a very yummy fish treat is of no interest to her. 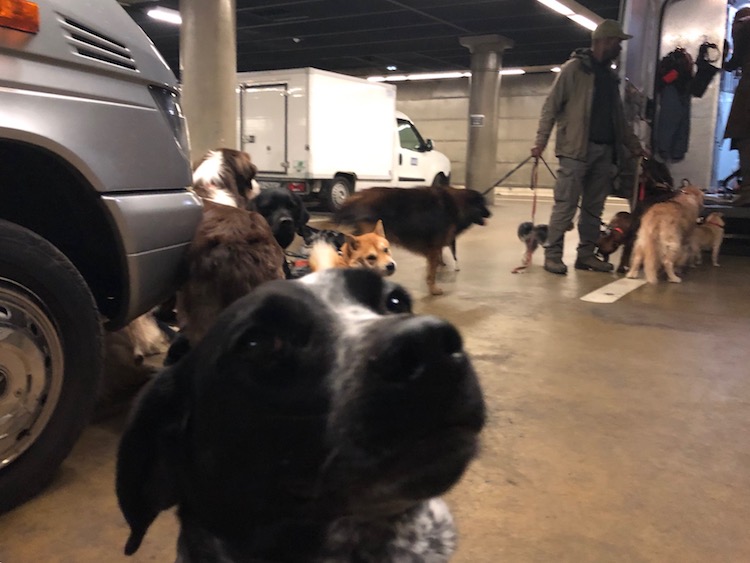 It was therefore with trepidation that a week later I let Tasha go with Koffi and the gang on an all-day excursion to the Fontainebleau Forest. This 25,000 hectare (62,000 acre) wood an hour southwest of Paris had enough game to keep French royals hunting happily for 800 years and has enough left over to satisfy today's commoners who continue the practice. It was hard to imagine that Tasha would not scent a deer or a wild boar and take off after it. In the middle of the day, Virginie posted a video on Instagram of Koffi, surrounded by dogs, walking through Fontainebleau's distinctive boulders; Tasha was nowhere in sight. I watched it three times but no sign of that white-tipped tail. 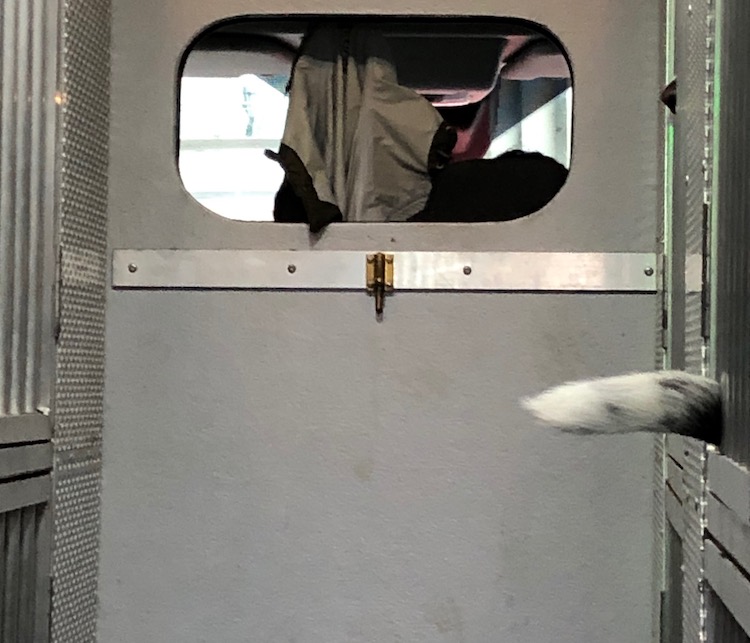 Much to my relief she did return with the other dogs. How did it go, I asked. Pas de problème, said Nathan, who accompanies the group. Still suspicious I pushed him a week later about Tasha's comportment in general: she’s always impeccable, he said. 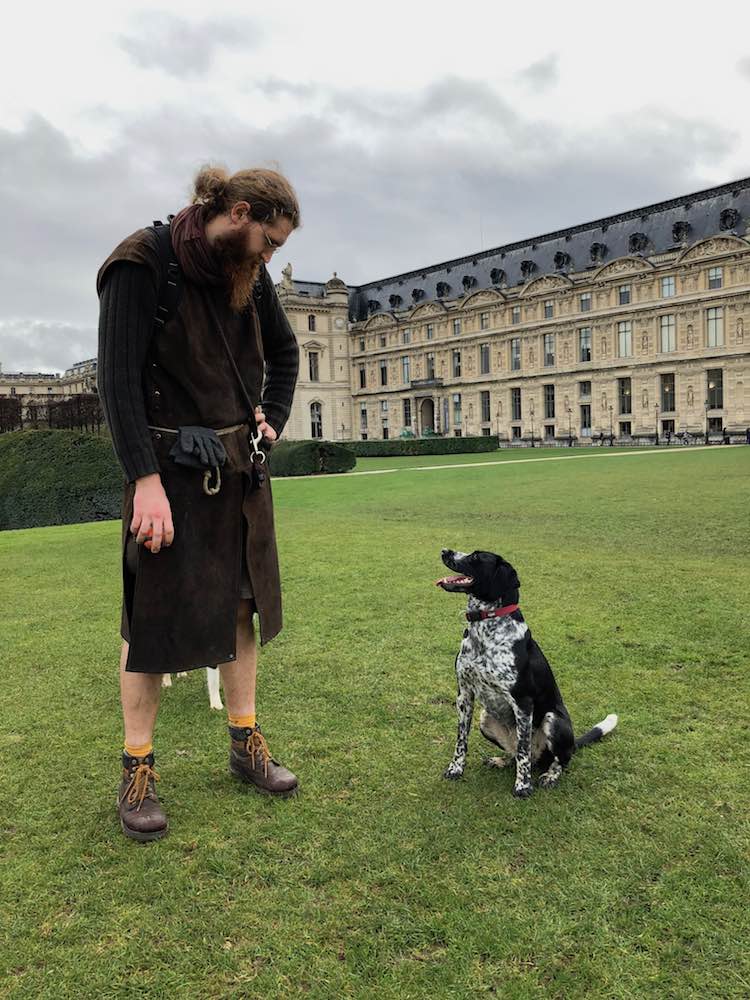 Koffi's magic may be partly responsible but it's also that dogs, like their lupine ancestors, are pack animals. Tasha clearly feels more secure and less distracted when surrounded by other canines.

Still I worried (it really never stops with this dog) about driving back to Berlin just days after her second stay at Mme P’s. Wouldn't so much activity, so much change, be too much for our edgy dog? Apparently not. In fact I’d say she has adjusted better than I have. At home she has been downright laid back... 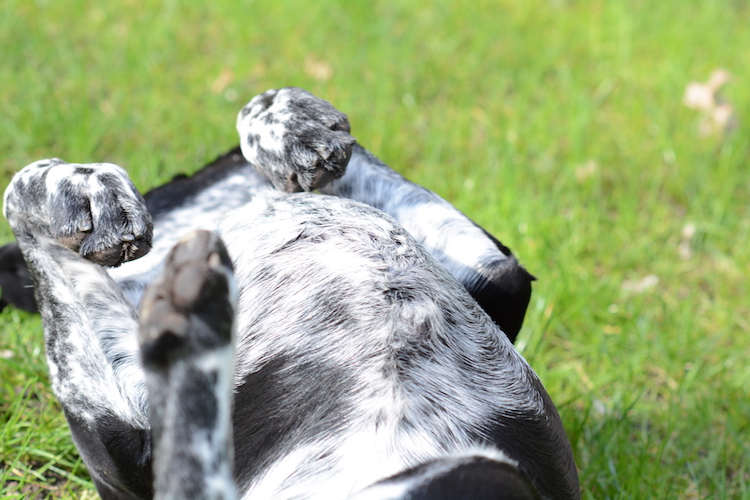 ...and during walks in the Treptower Park and the Plänterwald, she has been generally quite well-behaved. True, inclement weather has kept many inside, meaning fewer people to bark at. True too that with no leaves on the bushes I can more easily see what she’s up to. But there has been progress beyond favourable external conditions. When we bike, for example, she no longer acts like a husky in a sled race but trots compliantly alongside me. 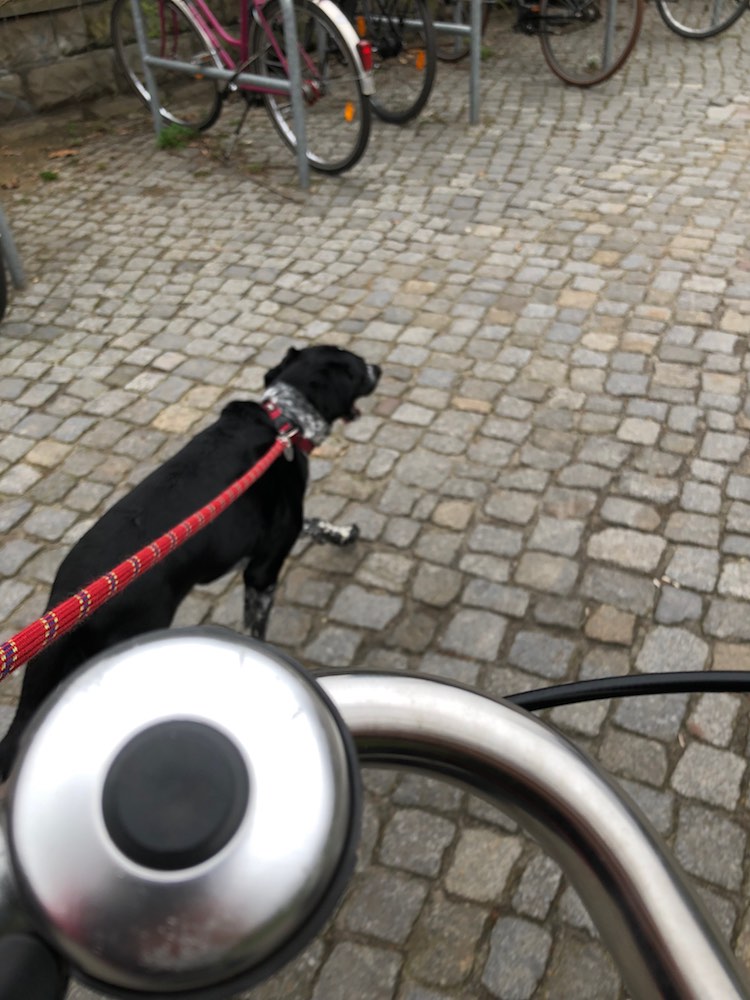 At traffic lights, she sits and waits for the little man to turn green with the patience and discipline of a native German. 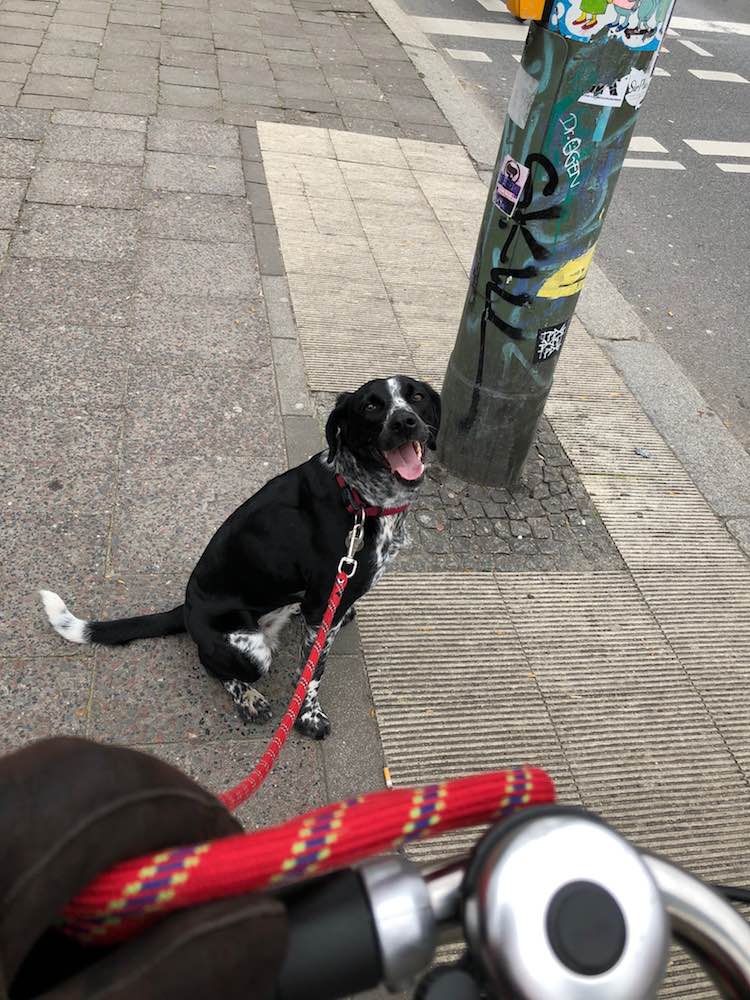 So I am left to conclude that with or without us, Tasha is progressing. As long as when she's going solo, those deer keep their distance. 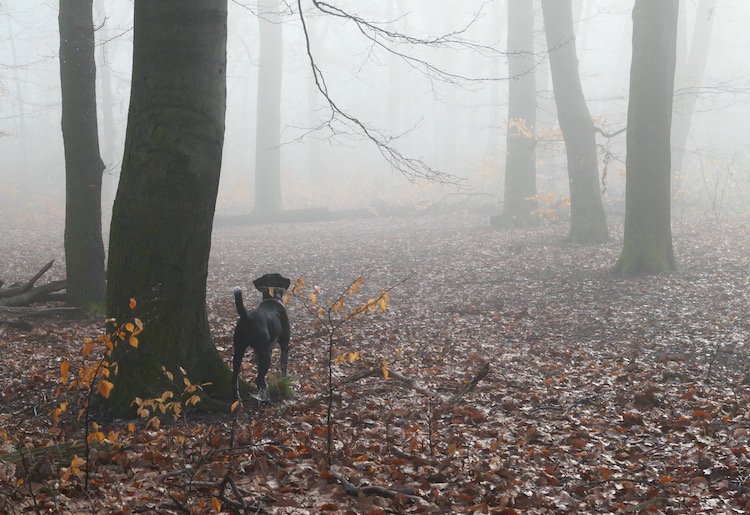