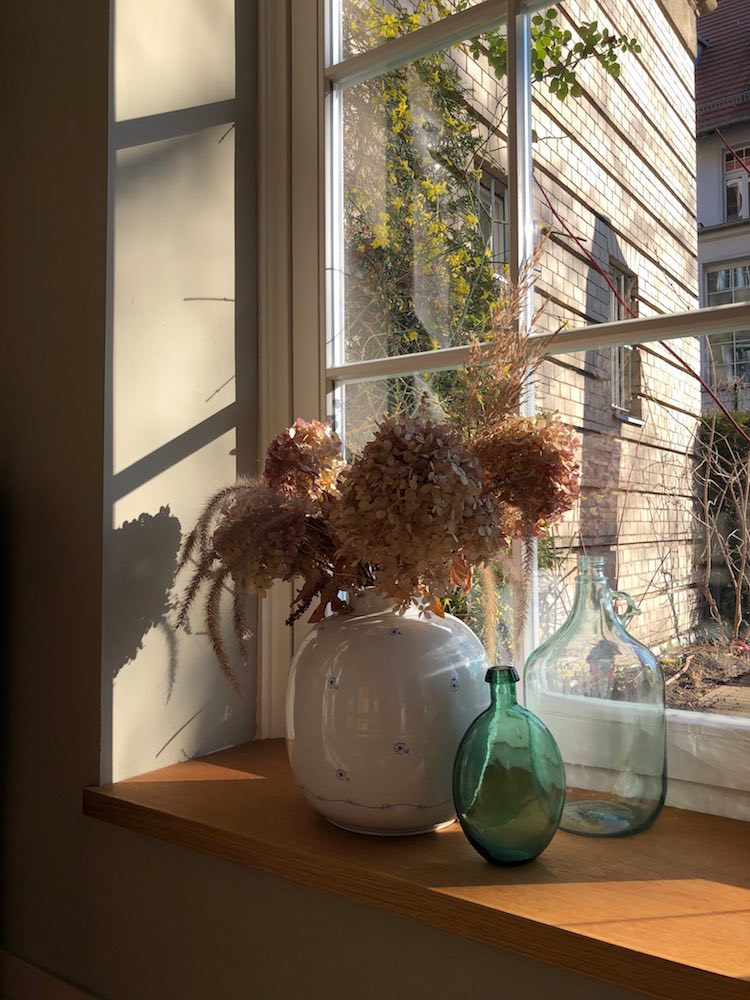 During our three-week Berlin stint in May, I drew up two lists, one with the preparations for the move mid-June and the other a personal catalogue of what I wanted to get done during this final stretch as a resident of Berlin. Here in Paris this last week I've been thinking about it and the window it gives onto my Berlin life. 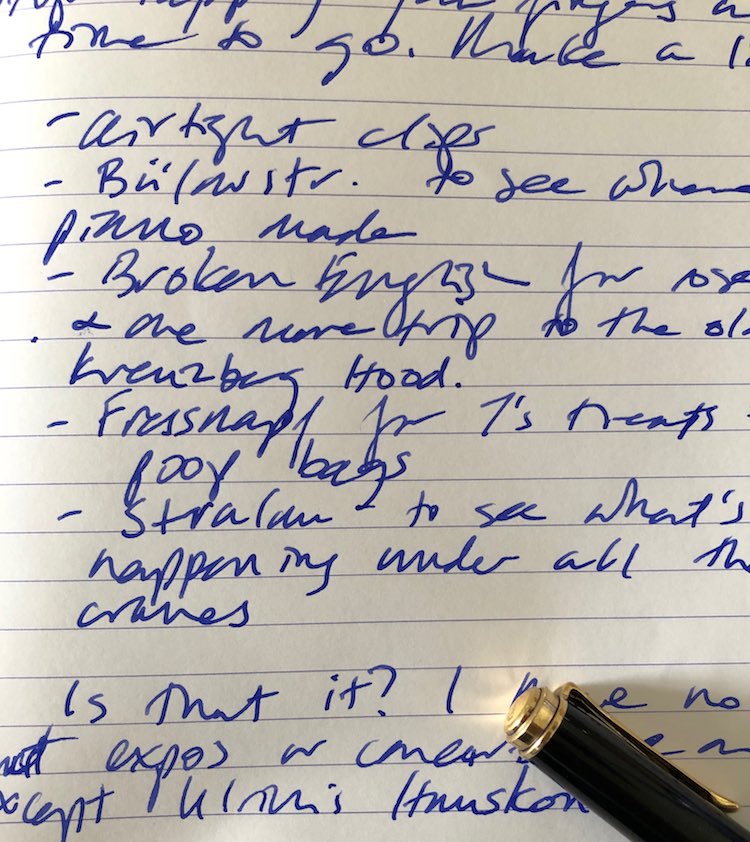 If you can decipher the handwriting you will see it is a mixture of domestic minutiae and the larger urban picture.

There are many small things that I have come to appreciate in Berlin. Some I can't take with me, such as the larger yoghurt pots that create less waste than their smaller French cousins. They have a perforated strip on the paper casing that allows for easy removal and separate recycling from the plastic body. Or the flat bread I buy at the Turkish shop or the dark, dense extra-seedy kind I've recently discovered at the Edeka supermarket or the 10 different kinds of fish that are smoked right there on the banks of the Spree. 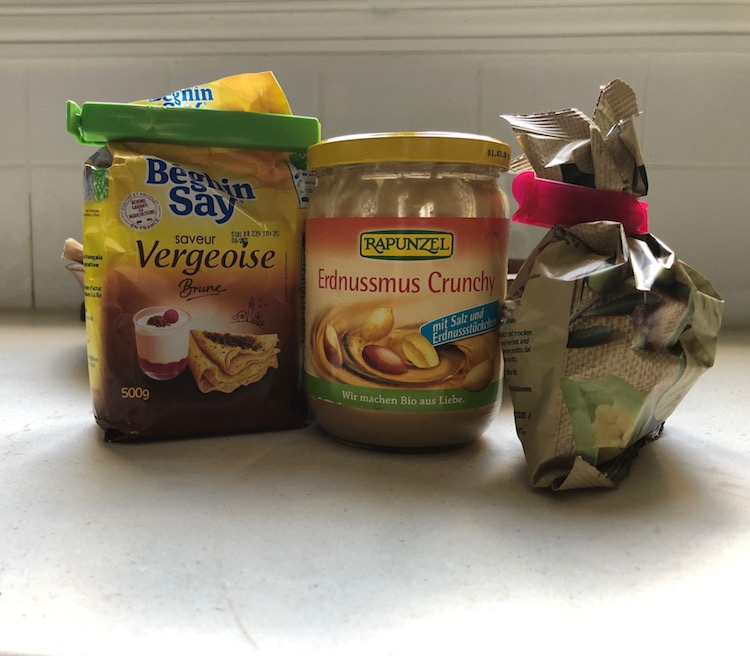 Other things are worth stocking up on. There are the fasteners (small and large, shown above) for locking in freshness. Here in France we have tended to use close pins or black metal clips meant for office use but they are far inferior to the German clamps in keeping out the air. There is the Rapunzel crunchy peanut butter, the best in the world in my humble but well-researched opinion. And dog supplies. You’d think the French would at least have the upper hand on the treats, if not the poop bags, but it’s impossible to get healthy snacks here in the quantities required for the training of la Princesse.

Finally there's the rose soap, which is actually English, that I discovered while we were living in Kreuzberg. Biking over to buy a bar or two would also allow me to revisit the fond memories I have from that short but sweet period in our Berlin life. 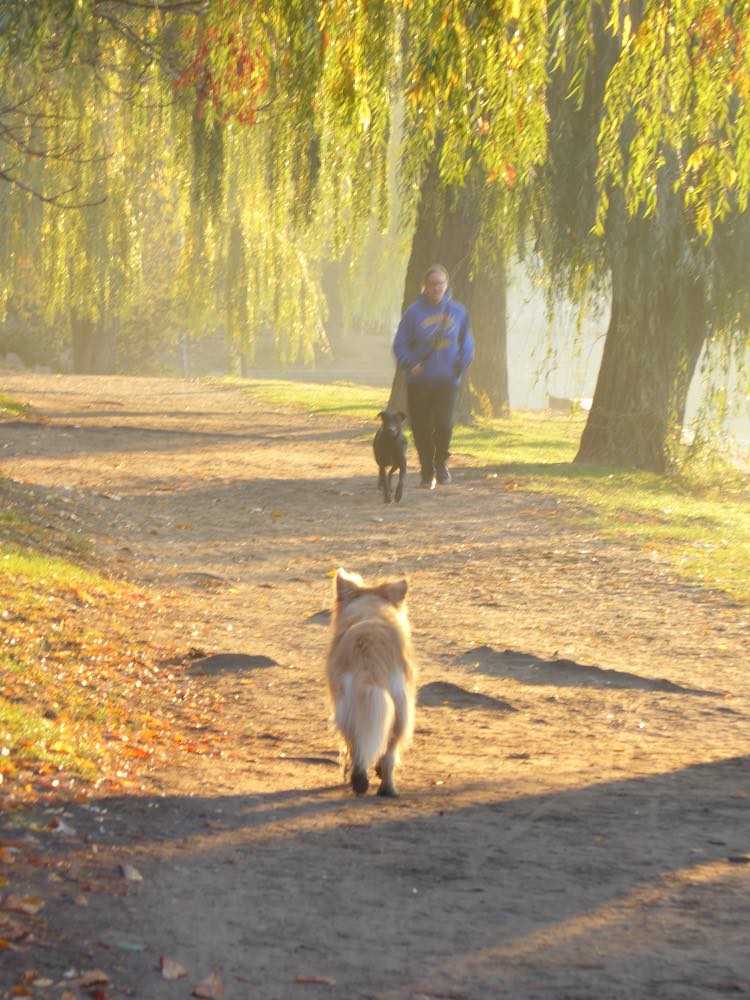 walking Elsa along the canal, Kreuzberg

I got there just in time. Broken English had lost its lease before renovation work (an easy way to then raise the rent) and was closing its doors at the end of the month. Amidst mostly empty shelves, I had a long chat with the owner, a British woman who has lived in Berlin for 40 years. She lovingly described her life in the divided years of the city. How cheap it was to live, especially considering you also got a subsidy just for residing in West Berlin. But after the Wall fell was an exciting time, too. “I got the best of it,” she said with a nostalgic smile. I bought five bars of soap. 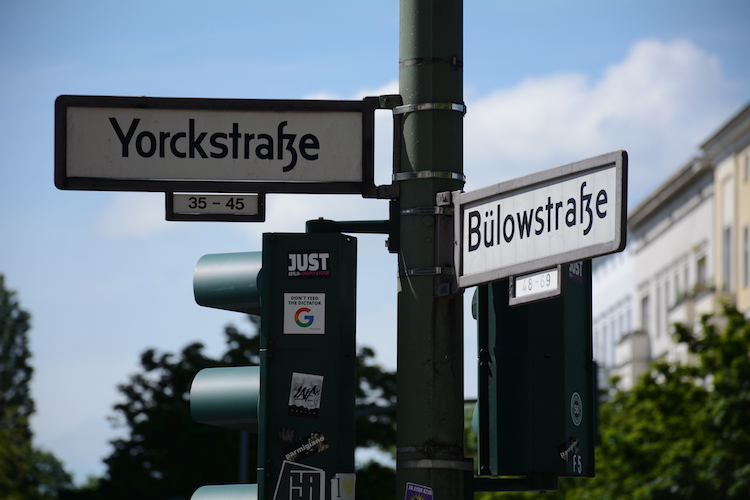 I was also determined to get to the Bülow Straße, where my piano was made in 1907, the same year our house in Alt-Treptow was built. Given its location, I imagined it had not survived the bombs or the urban planners but I was wrong; number 48-49 has endured. 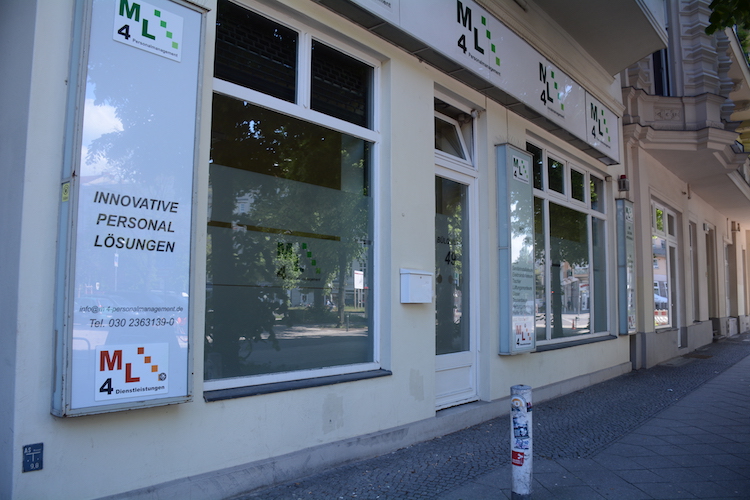 It is easy to imagine this long storefront, now a job centre for artisans, was once a workshop large enough for Carl H. Hintze to build and display his Klaviere and Flügel. My piano will be the subject of a forthcoming blog; for now I'll just say that standing inside (when a woman entered number 49, I stuck my foot in the door and entered behind her) was a heady whiff of the Berlin that is still stuck in time. 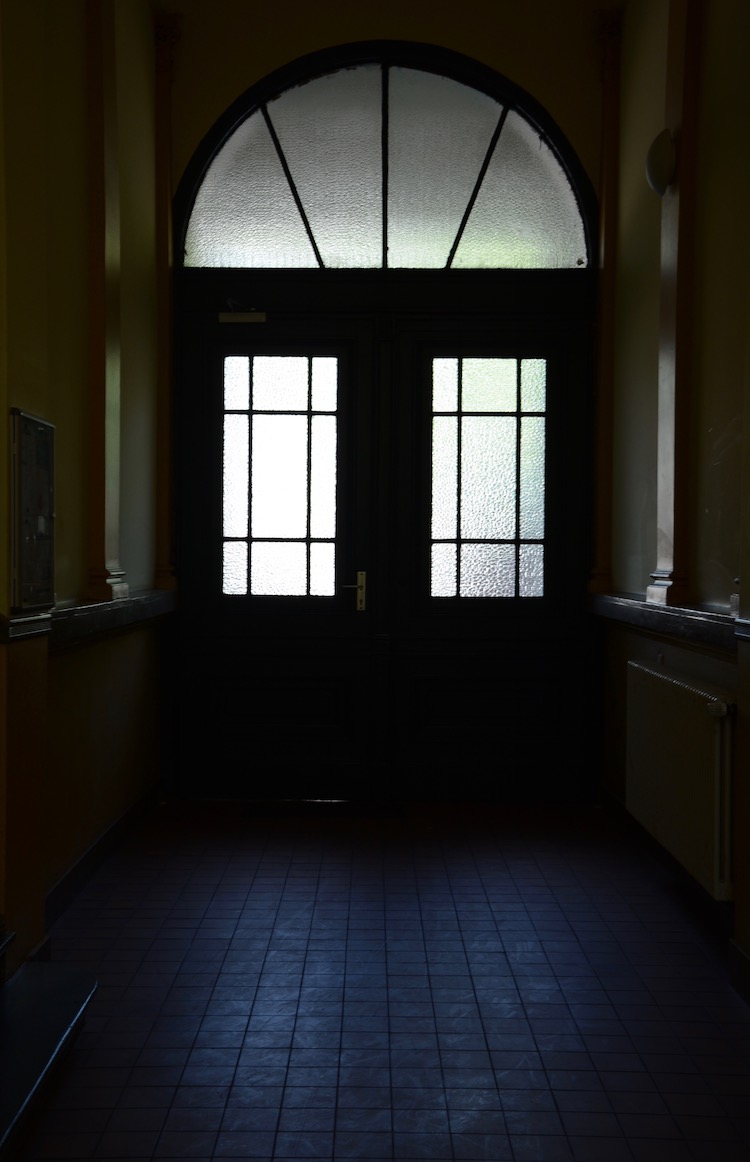 Last on the list was a final tour of the Halbinsel Straulau. Though I have been visiting and documenting this peninsula since we moved to Alt-Treptow in 2015, the growing number of cranes had been beckoning me from across the Spree on my morning dog walk for quite a while. 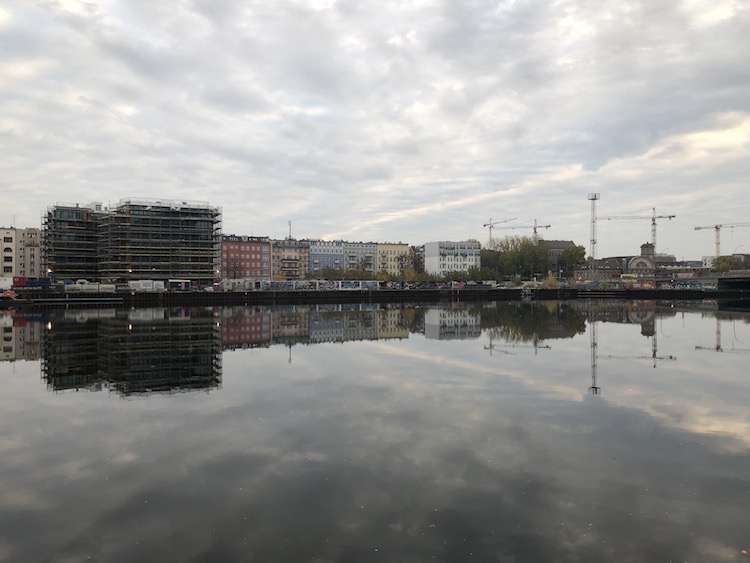 Originally I was attracted to the dilapidated buildings and wasteland surroundings. 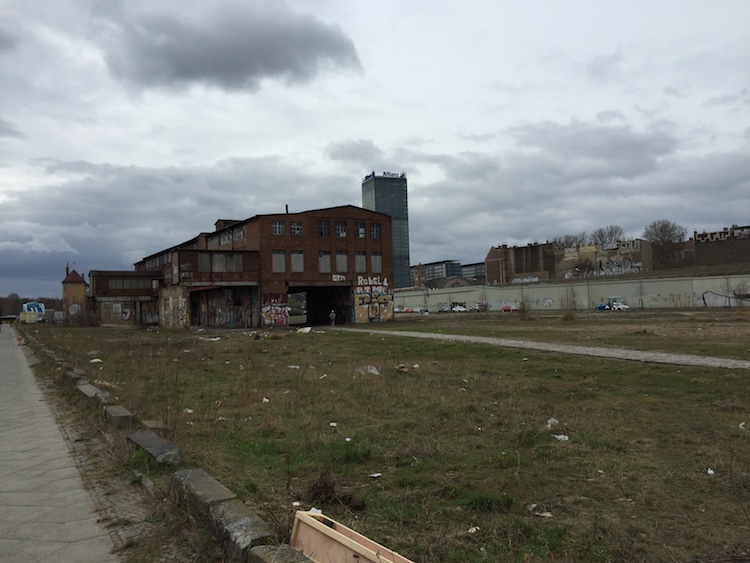 Now, given the cranes and the general building frenzy in Berlin, I should not have been surprised by what I found. But I was. 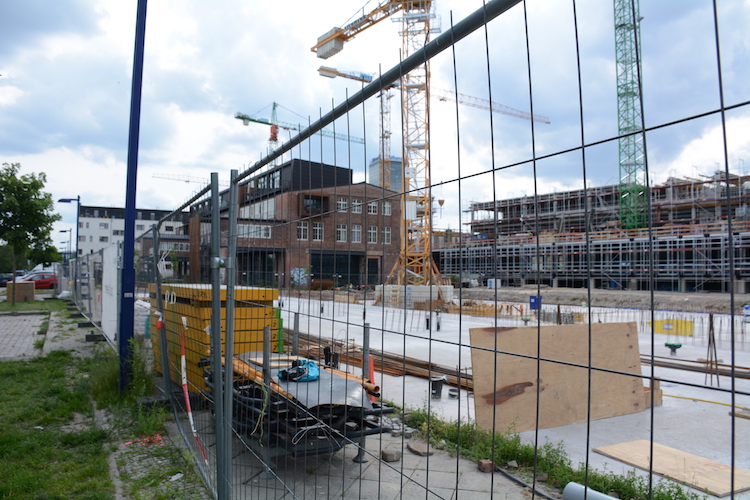 In fact I hardly recognized the place, which every day looks more like Florida-an-der-Spree than what I think of as Berlin. 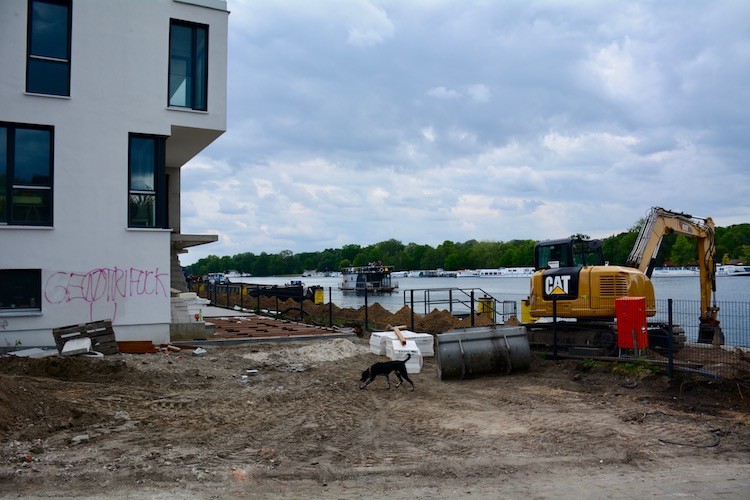 not everyone is happy about the construction

It feels completely soulless, in a very soulful city, and I sympathize with the graffiti-er who wrote GENTRIFUCK on this unfinished but already occupied building, even if I myself am a gentrifier, albeit of an old building. 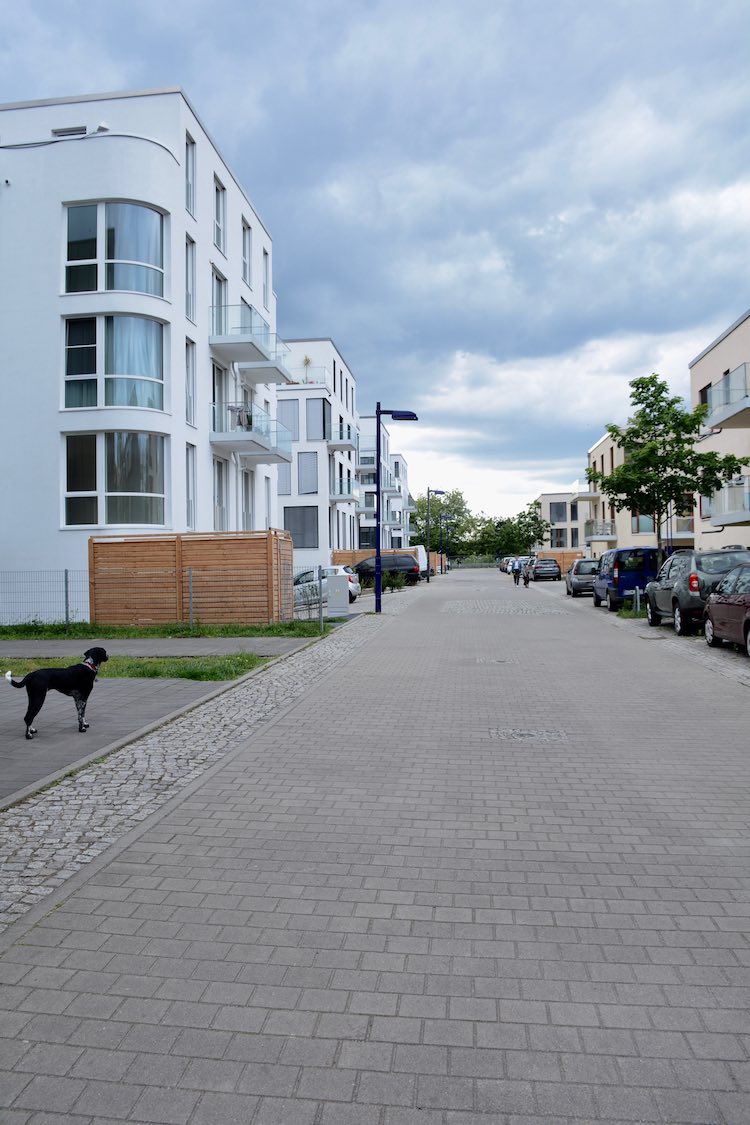 What's a dog to think?

I kept thinking that Karl Marx, who once lived here, must be having a good I-told-you-so moment from the grave. 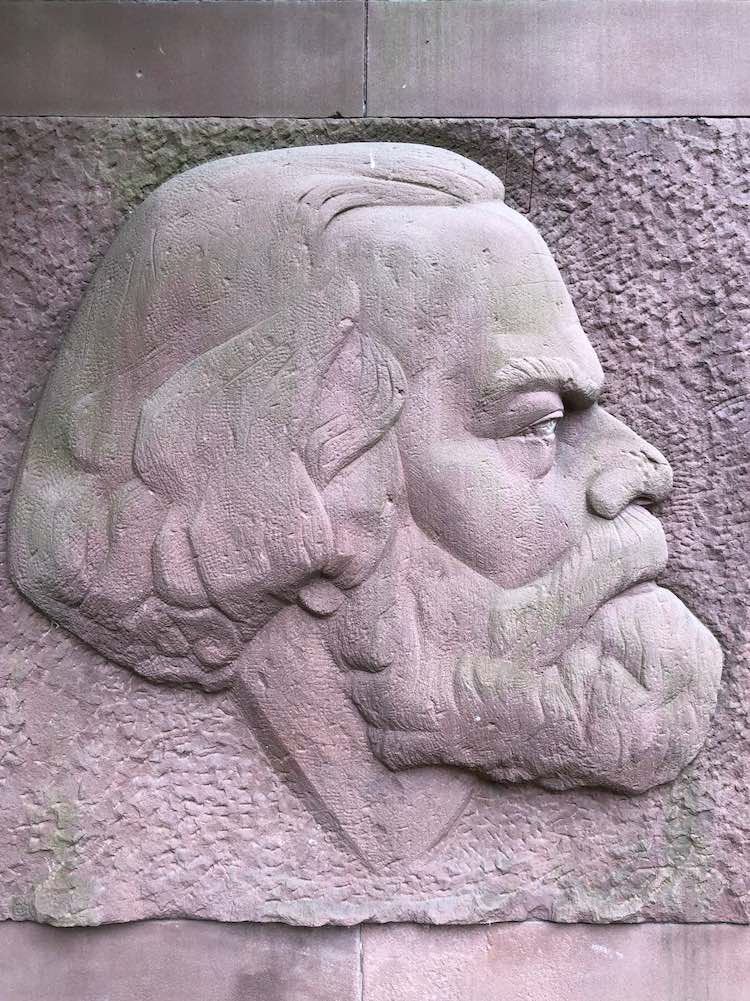 There is much that I will miss in Berlin. The vicissitudes of its history but also the small things that punctuate my days and make even a desired move a wrenching experience. The city's apparent vision of the future, however, is not on the list. Still, I did catch the tail end of the best of it and for that I am grateful. 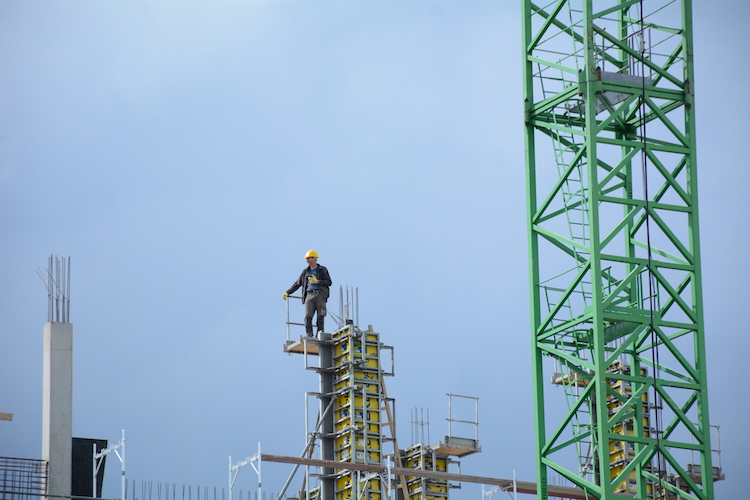