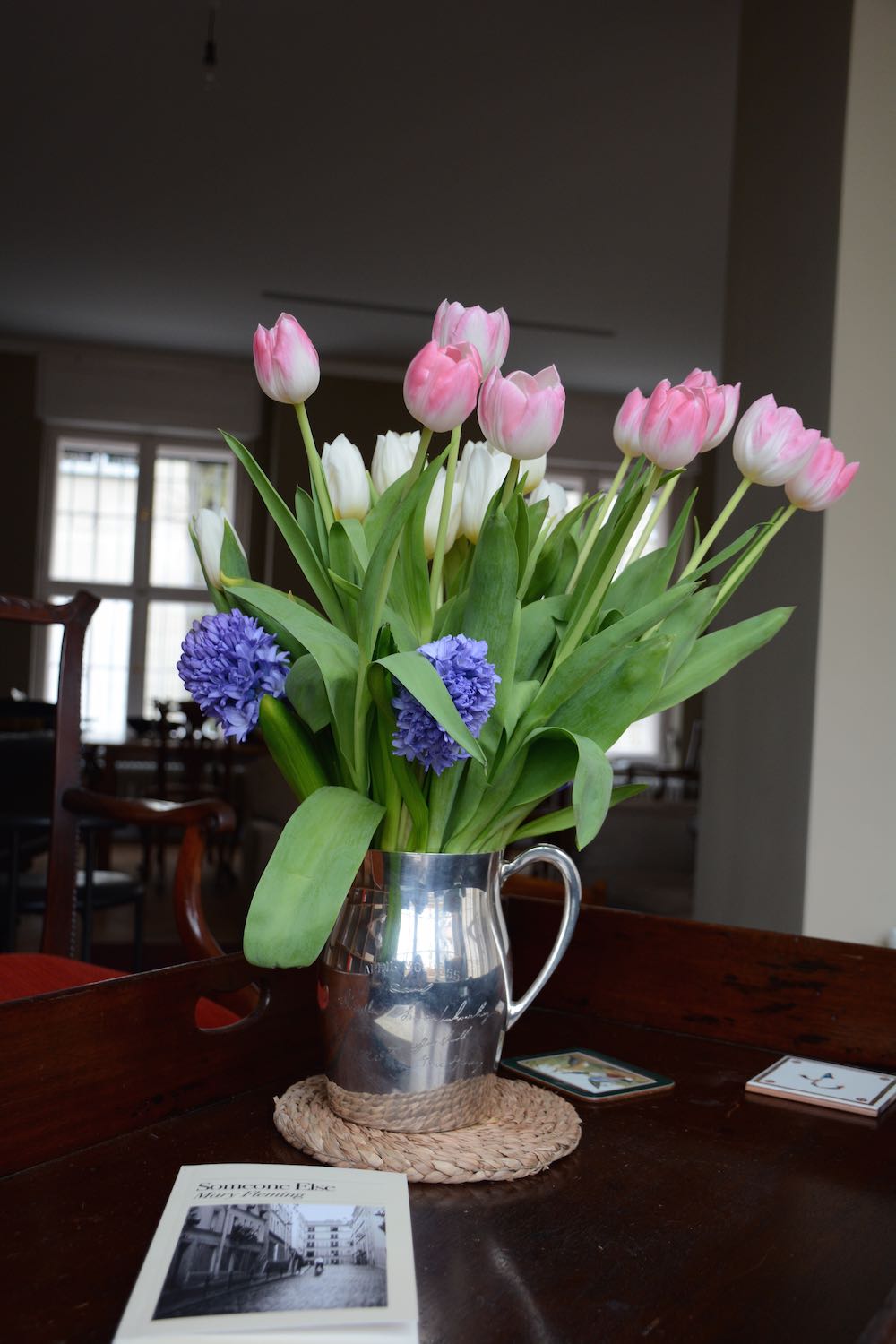 Good Friday, a holiday. As is Easter Monday, thus keeping both Protestants and Catholics happy. Another religious observance and its concomitant traditions taken seriously (see Traditions, 10 Dec '14). The Frohe Ostern’s began early in the week; yesterday afternoon Berlin got very quiet. The workers who are still pounding and sawing and drilling around our building were gone by two. By five when I took Elsa out, the streets had that empty, echo-ey feel of Paris in August. 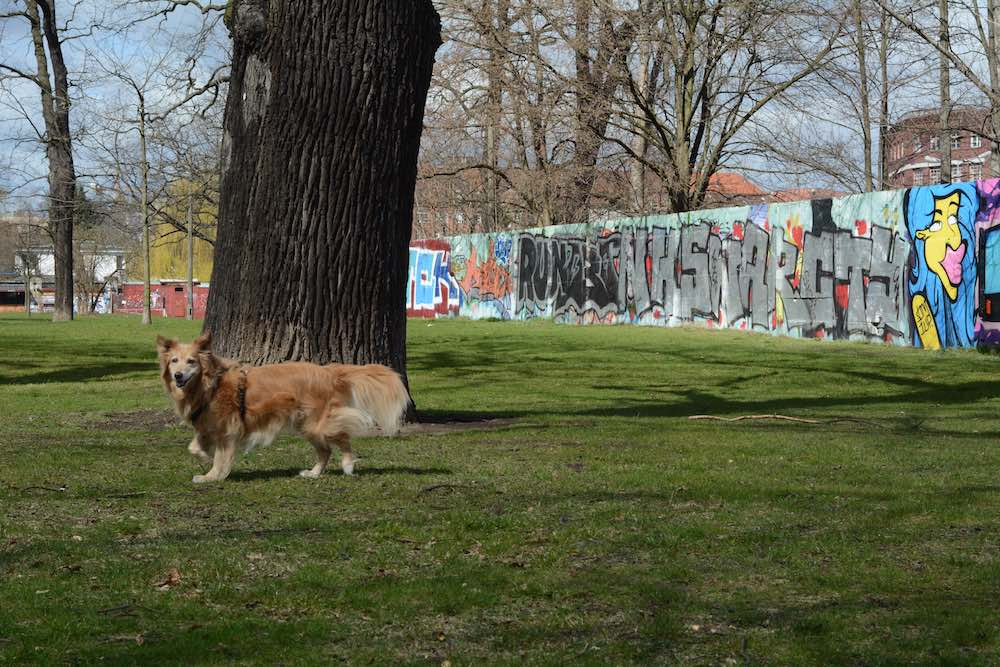 It seemed those who had not left town were congregating at the LPG BioMarkt, where, after realizing I’d better stock up, I rushed for provisions. The aisles were crowded and lines long, as if we were collectively preparing for a last supper. Today, natürlich, everything is closed.

The past week we’ve had more evidence that this powerhouse economy has its limits. That in some ways, it’s stuck in another century. Alas, our communications problems persist (see Moving, 21 Jan '15; Moving, Part II, 29 Jan '15). Yes, we now have internet and a land-line, with the main post stationed in the laundry room (“no, it has to stay here, hooked up to the box”). But that’s okay because we don’t use it much. Not having found any contracts that include international calls (even stuck-in-the-mud France has plenty), we mostly rely on Skype or FaceTime to keep in contact with our scattered family.

The television connection, however, remains a poser. Ralf K., our friend and saviour, told us that despite two visits from KabelDeutschland and several from the building’s electrician, there appeared to be a problem beyond either’s grasp. So Ralf had another electrician coming Monday morning. As we didn’t yet have a television, David was no sooner off the plane from Tblisi on Saturday than off we went to Saturn to buy one. On Monday the new electrician opened up the fuse panel, poked about. When he said “there should be no problem” (hadn’t I heard that before? do I ever learn?), we stupidly did not ask his assistance in hooking it up.

That evening, cables all in place, remote controls armed and ready, we tried for over an hour. Time and again, the dots rolled around in a circle, only to finish with a sign telling us there was a problem with the antenna. We actually believed it was a problem with us, so the next day called in the building’s electrician again. He watched the dots too; then went back over to the fuse panel. “You need an antenna company. Your system,” arms thrown hopelessly toward the box, “is too complicated.”

“Too complicated?” I said to David after he left. “We want to be set up for telephone, internet and television, like almost every other household in the developed and even not so developed world and it’s too complicated?”

Ingo and Axel, who came later to help us with curtains (much needed in this ground floor flat), gave it a go. Persistent and thorough, they unplugged the whole business and went from antenna outlet to antenna outlet. 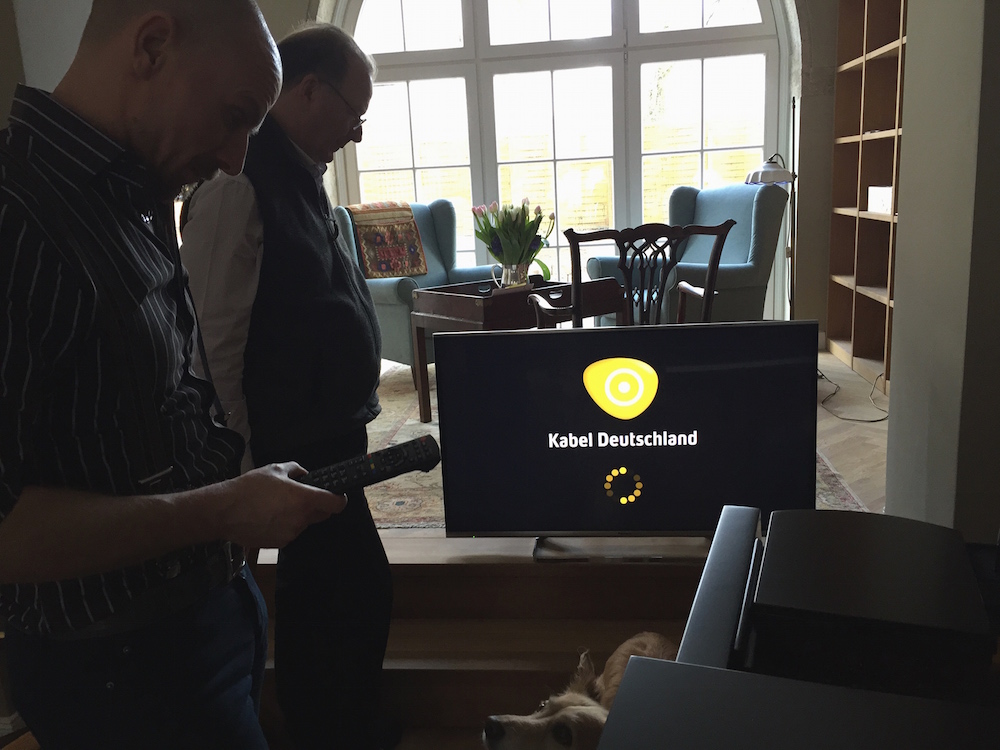 Nothing worked until guess where: the laundry room, of course. They then found this loose cable, leading them to believe it’s not connected to the other outlets at all. 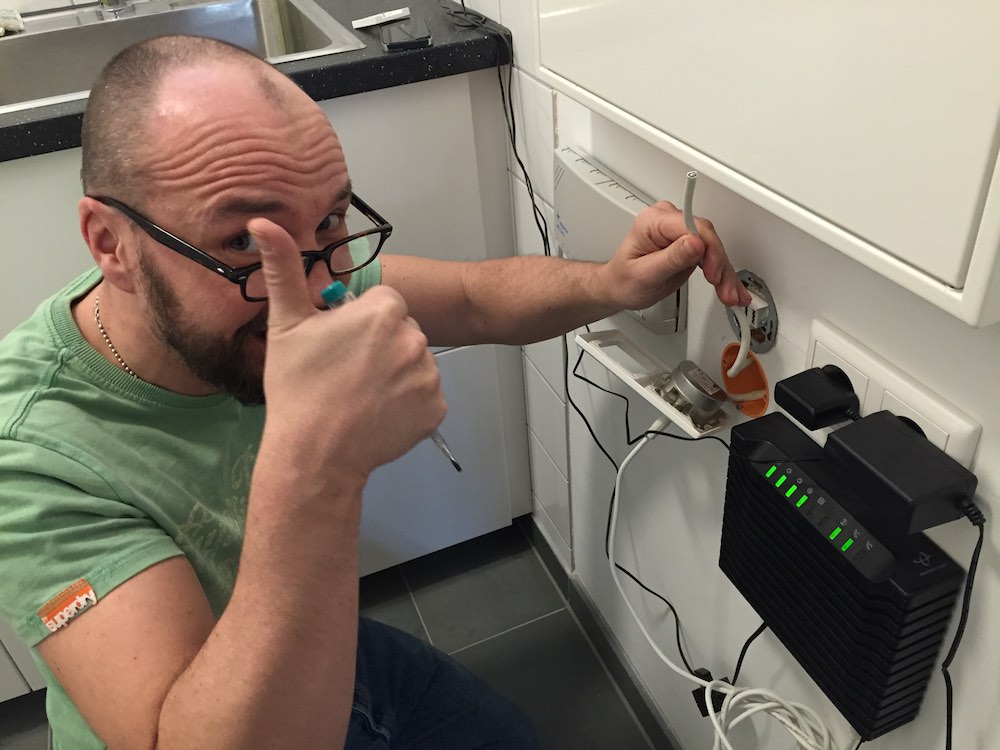 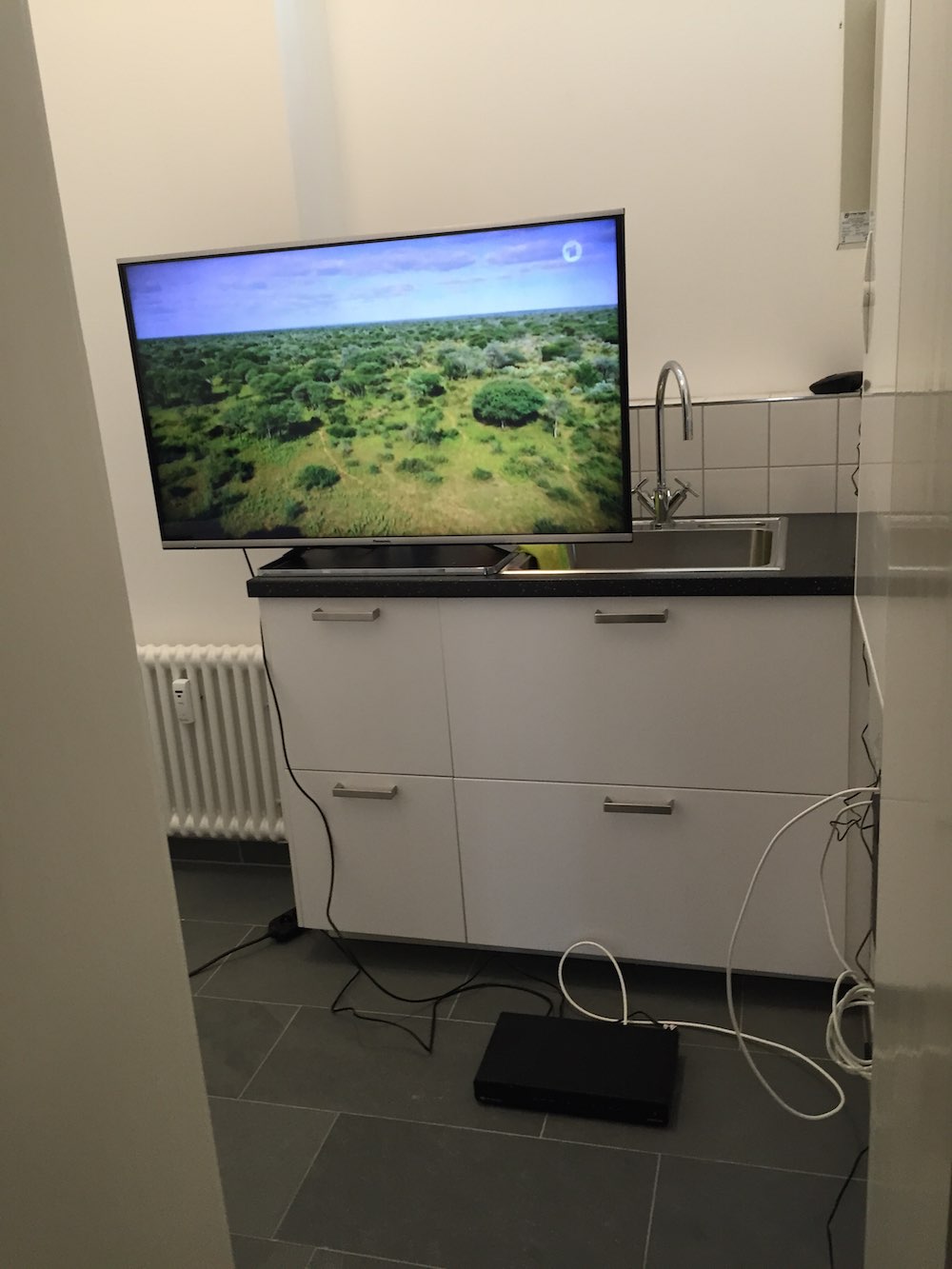 “It’s fine,” said Ingo. “Mary, you can sit on the washing machine and David, you on the dryer.”

So this long holiday weekend will not include any television from our no-frills, all-German channel contract. Instead, we’ll continue to explore the odd mix of old and new that this city offers at almost every corner. 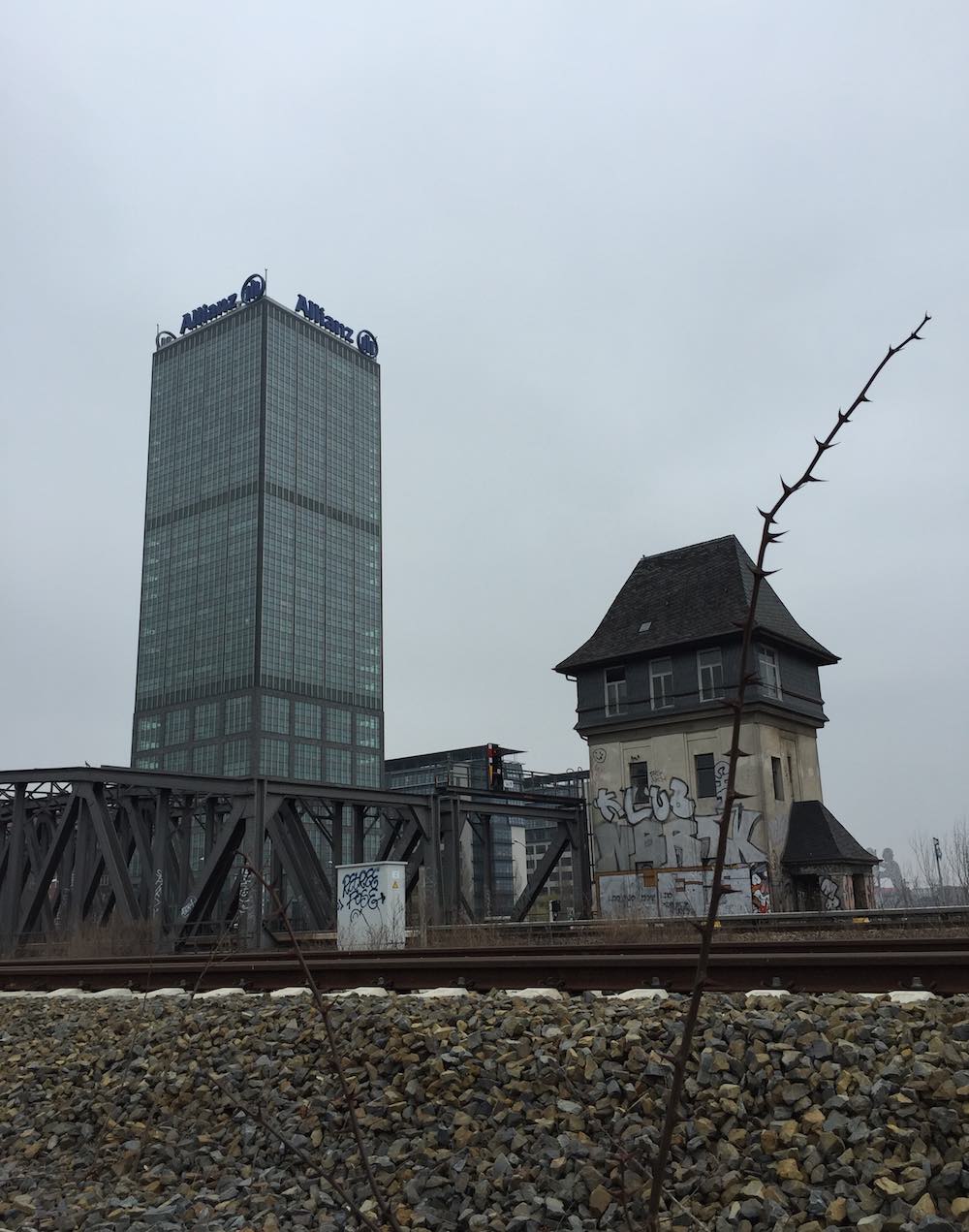