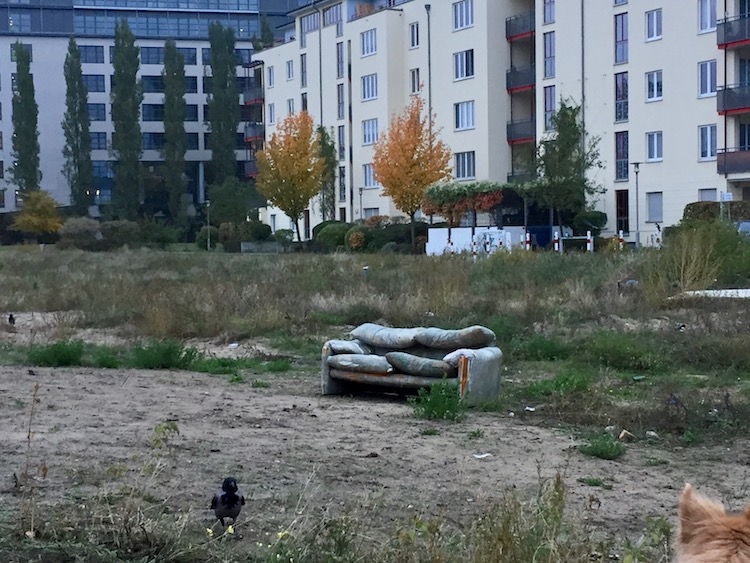 For the last three years I have rounded the corner with trepidation, expecting the worst. But it's been okay. Until last week.

Our little Kiez of Berlin, Alt-Treptow, is bordered on two sides by water, the Spree River and the Landwehr Canal. Long ago it was too swampy for much building beyond a Fischerei, an apiary and a café-bar. People came here to get away from Berlin for the day, to eat some fish, drink some coffee, maybe buy some honey. In 1840 the population was 32. After a nearby heath was cleared, the area dried up enough for people to build majestic weekend houses and handsome apartment buildings. 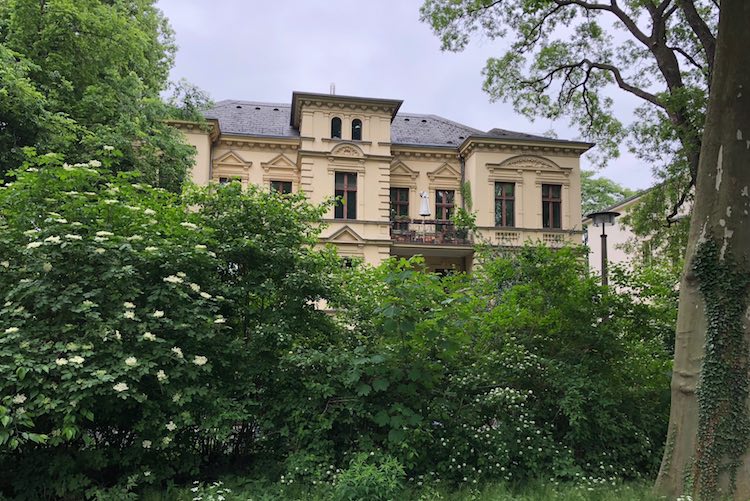 Given its place on the river, industry also developed and rail lines were constructed to transport goods. During the Second World War the big houses were, not surprisingly, popular with Nazi officers. Our own former orphanage was occupied by the German army. In 1945 the industrial part of the area was largely destroyed by American bombs.

During the GDR period Alt-Treptow, being small and tucked into a corner of East Berlin, was left to languish. By the time we moved here early 2015, our little street near the river had some post-1989 low-rise housing and a couple office towers. Until last week there was also still a large swathe of land on the Spree that had not been touched since cleared of rubble from the bombs that had levelled it (top photo).

In May 2015 I wrote a blog about all the construction in Berlin. In the course of its composition I coincidentally learned about the project to build two huge high-end 110 metre (360 feet) apartment towers and one luxury hotel on this field (click here for the architect's rendering of the project).

Hence my trepidation every time I rounded the corner, first with Elsa, then with Tasha. Despite a protest movement and the enlisting of legal defence services to which I contributed some money, I always knew it was a lost cause. But hope is an impossibly difficult urge to suppress. 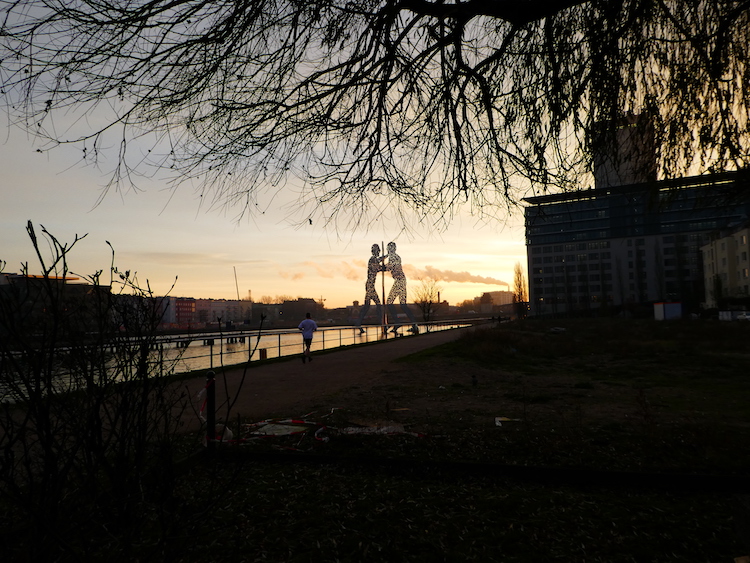 Even when several months ago vehicles arrived with equipment and began some sort of work. 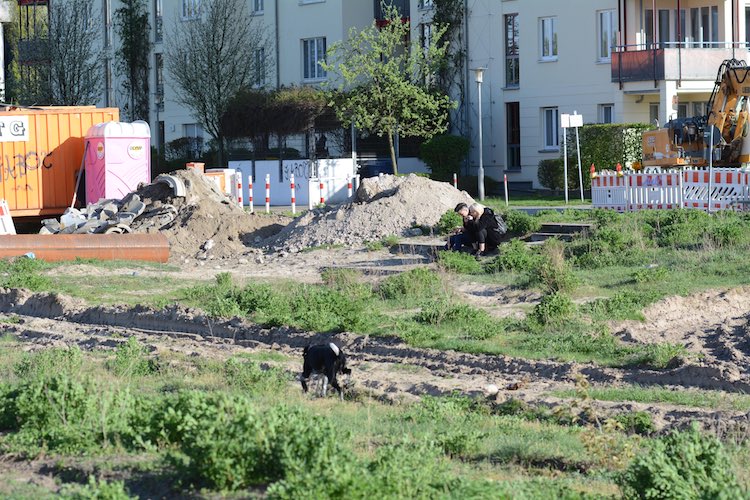 Because a few weeks later they took their stuff and departed, leaving the field as it had been. I allowed myself to think that maybe the legal battle was winning. Then about two weeks ago more vehicles arrived. They just sat there for many days, as if the developers were trying to ease the unhappy residents, about to lose their light and view of the Spree, into the disruption that would follow.

Last week they closed off half of the grassland and began digging. 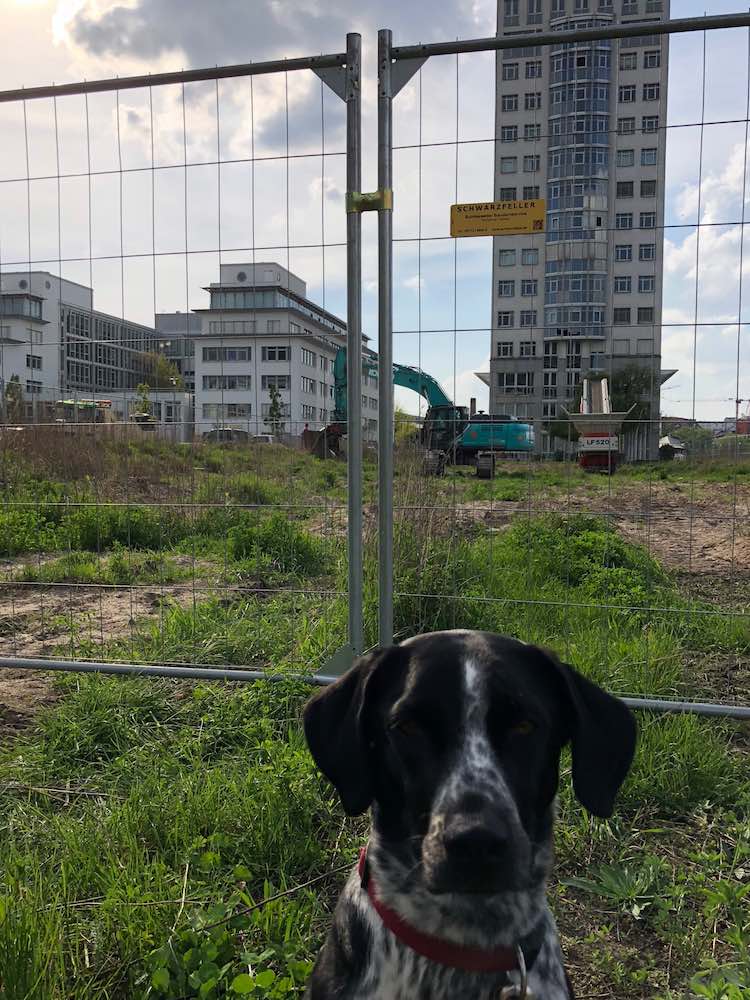 Two days later all the grass was gone. Now the whole thing is closed off and digging advances apace. 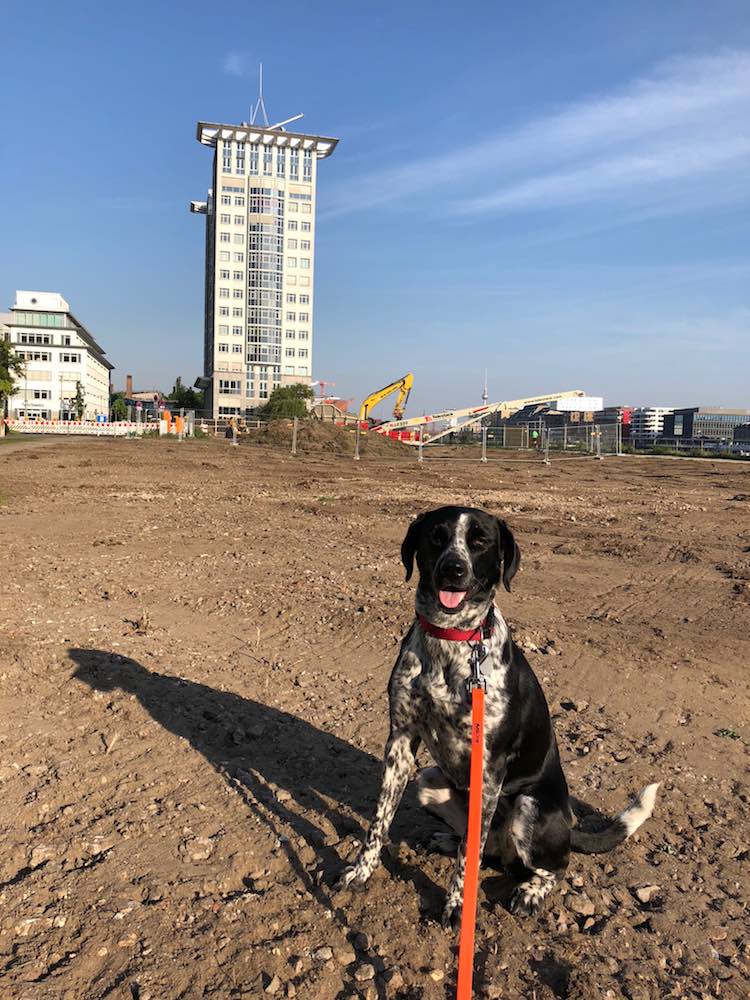 How can I have any fun here?

Partly it’s the sheer size of the towers that distresses me. Turning our neighourhood into a mini-Manhattan will change its character and not just physically. All those apartment livers and hotel guests will also mean lots more people and lots more traffic on our quiet little street. The population of Alt-Treptow in 2016 was 11,934. What will it be in 2020?

Of course what's happening in our immediate surroundings is just a snapshot of the larger picture. The building frenzy in Berlin since my 2015 blog has been vertiginous.

There's the extension of the A100 road that rings half of Berlin and will allow cars to whizz past the Park Center shopping mall and even more unfortunately right by the end of our street: 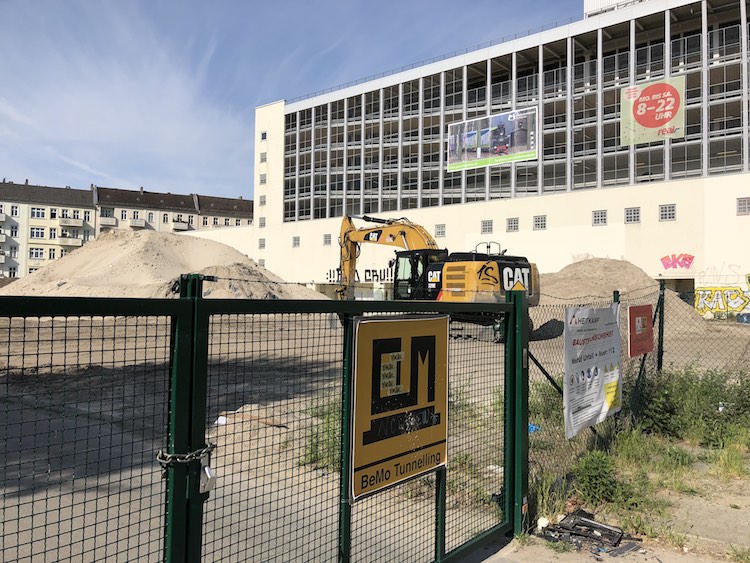 Across the river in Friedrichshain there is, for example, this: 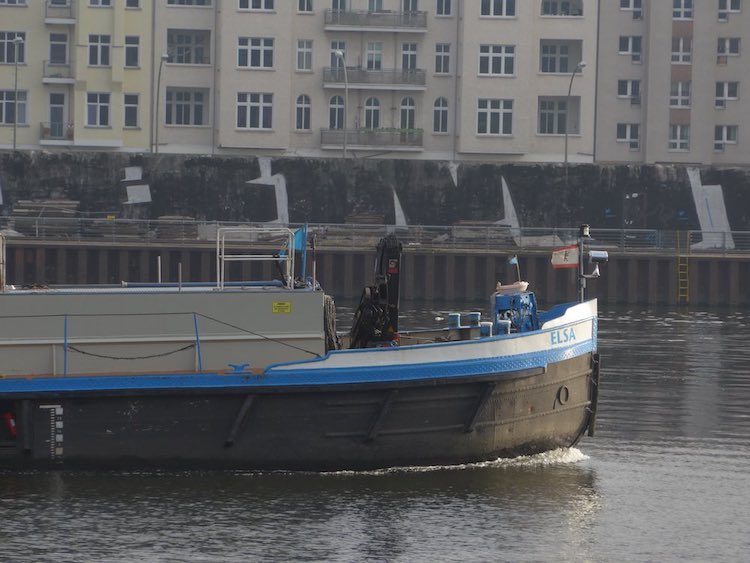 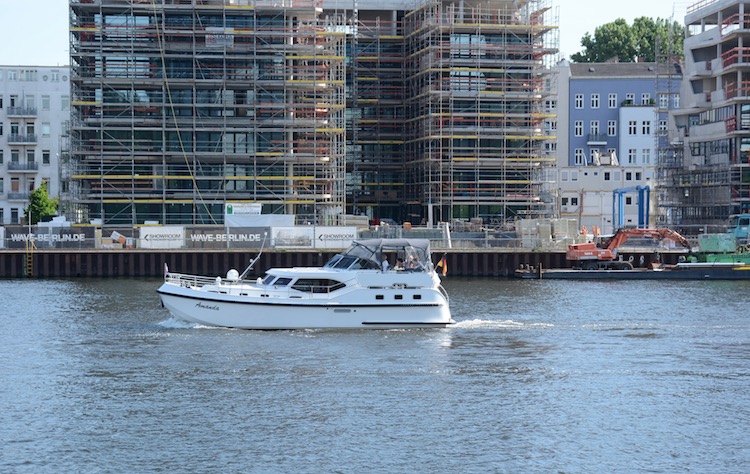 The Straulau Peninsula, a little farther up river, is beginning to look like a Florida condo community. How this house has remained untouched, I do not know but surely it cannot hold out for much longer. 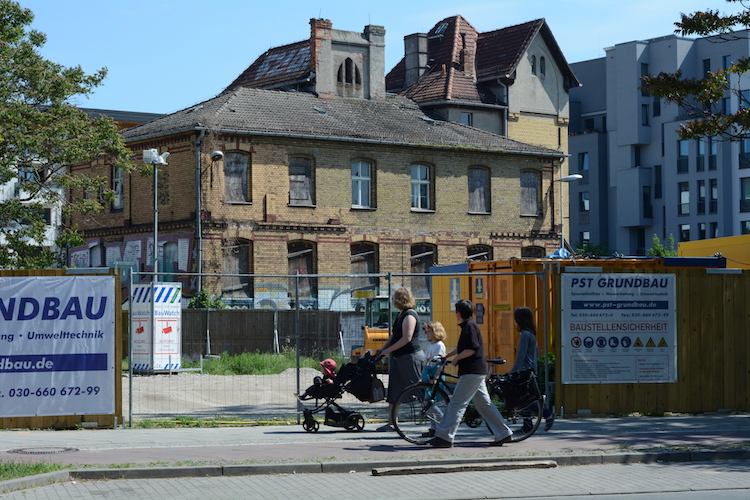 Property development is changing much of the city's appearance. And by pushing out the poor and the marginal, it's transforming, if not smothering, its soul. Here for example there used to be a squat: 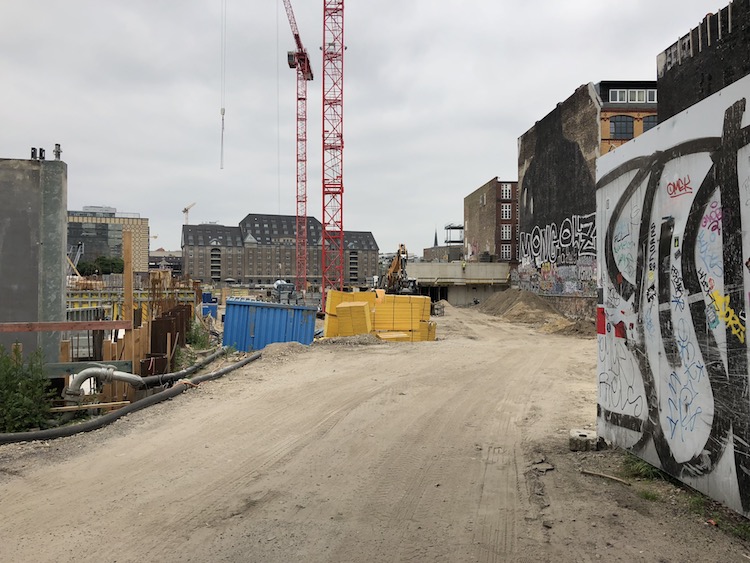 Out, out damn squat!

Click here to see drawings of the finished product.

Edgy clubs that took over dilapidated buildings are being driven out. The Magnet/Comet Club, for example, was ousted first from Prinzlauer Berg, then five years later from Kreuzberg, when the building was bought by Google. Many of the artists who flocked here in the '90s have already decamped to Leipzig. 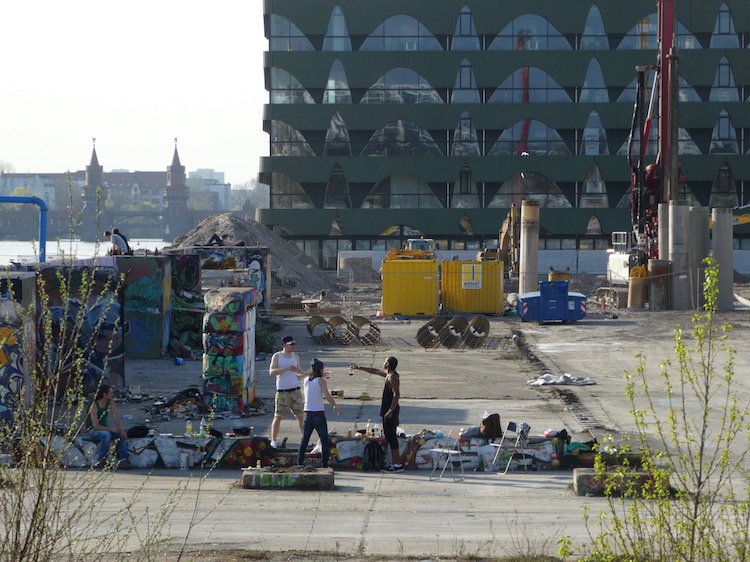 Where will these young people hang out tomorrow?

Of course Berlin couldn't stay in its post-war, post-GDR state of trauma forever. Of course it's the arrival of people like us (or, more precisely, younger versions of ourselves) that's driving the change. Many find this new chapter in the city's kaleidoscopic story fascinating. But I am saddened to see Berlin's history disappear, to witness its experiment in alternative living being elbowed out. To see money, always the winner these days, turning this very particular place into just another large modern city.