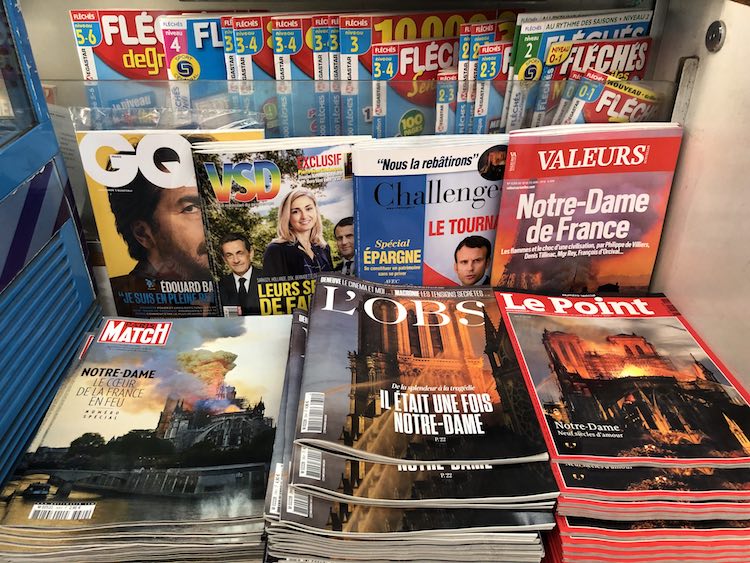 Much ink, both real and virtual, has already been spilled and I begin this blog uneasily. What more can I possibly add to the outpour? On the other hand how can I write about anything else?

I am referring of course to the fire that ravaged the cathedral of Notre-Dame de Paris on Monday the 15th of April. “It breaks the heart,” I kept thinking and writing to friends. The hearts of us humans who have lived here for decades and even those who have just visited as tourists but also the heart of Paris herself. Because when I close my eyes and imagine Paris I see a graceful, finely-clad lady. The lady is Notre Dame, the city her abundant, richly layered skirts.

The fire was one of those events that is both personal—linked to one’s own memories and psyche—and public: the 850-year edifice of extraordinary beauty has survived wars and revolutions and belongs to a collective history that, given the outpouring of sympathy from all around the world, now feels global. Tourist or Parisian, you will always remember where you were and who told you that Notre Dame was burning. I got the news about my oldest architectural friend in Paris from Tala, my oldest human friend here.

From the roof of our building there is a very good view of the cathedral. 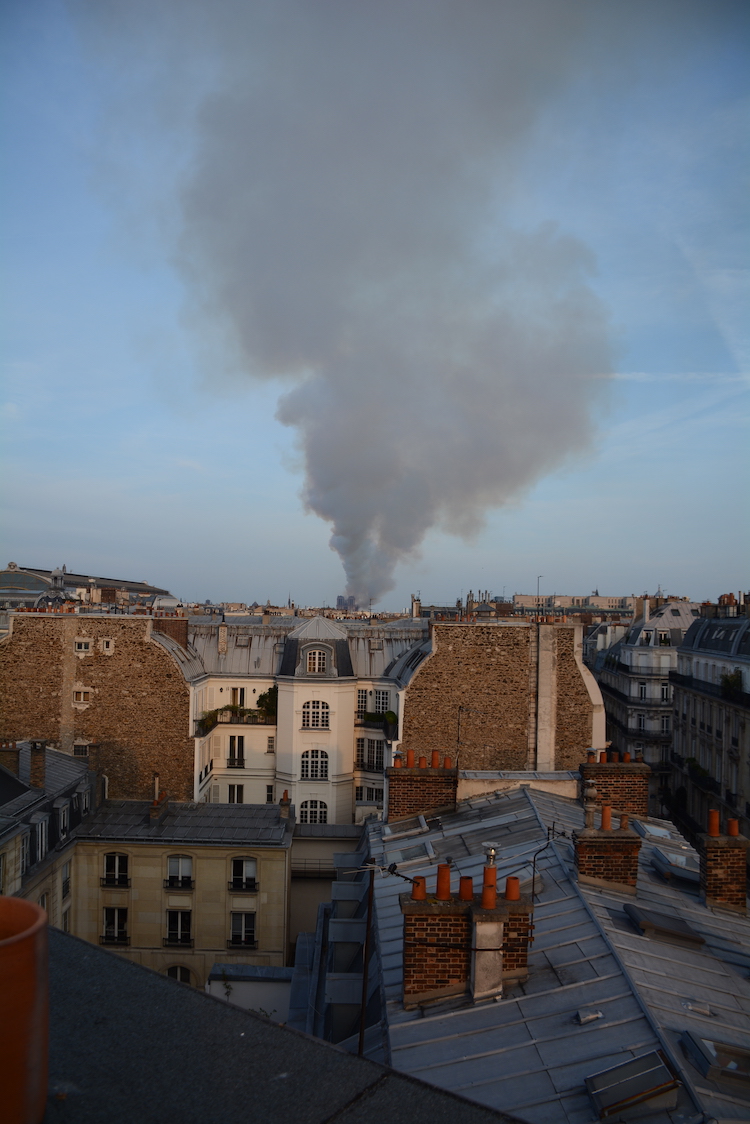 To the constant sound of sirens, I watched, dumbfounded and teary. 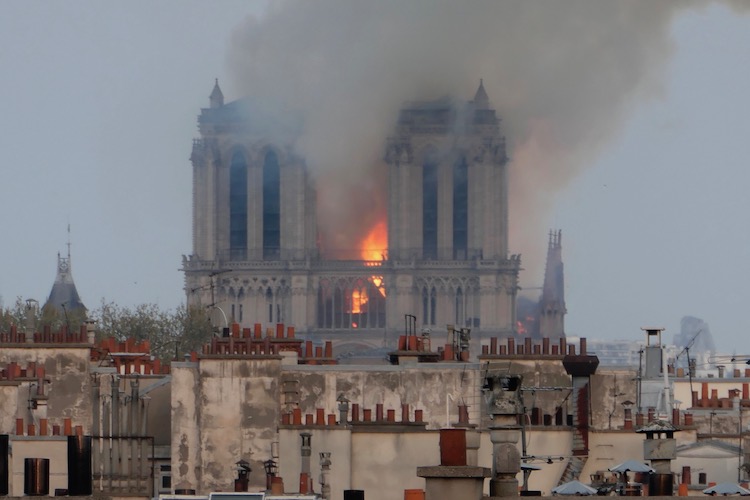 My heart pounded as flames leapt and I feared the worst: that one or both of the twin towers would suddenly crumble before my eyes. The smoke, which at moments engulfed the entire edifice, 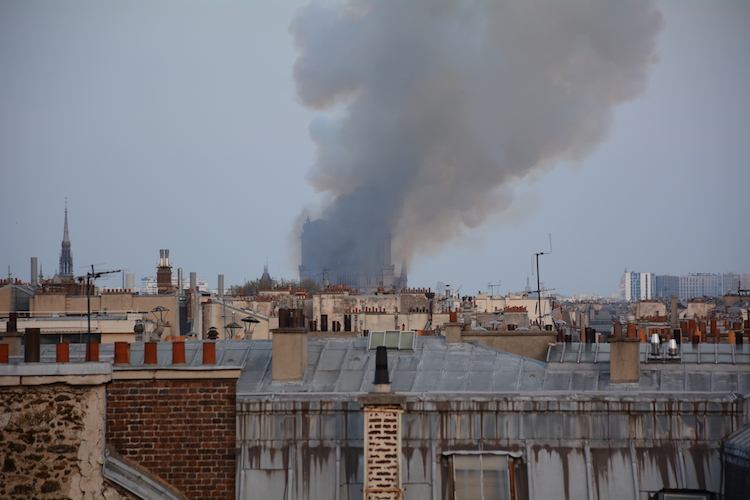 travelled right across the sky, clouding the setting sun by the Eiffel Tower on the other side of the city. 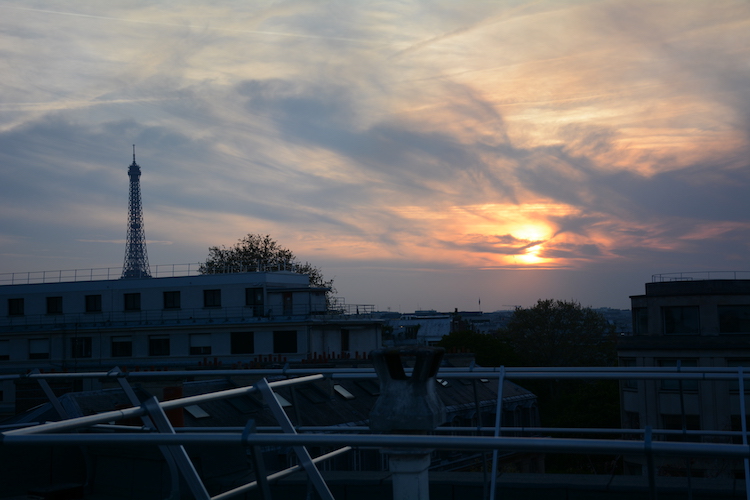 Eventually I went outside, down to the pont de Solférino, where a small crowd had gathered. Some people looked deeply moved; 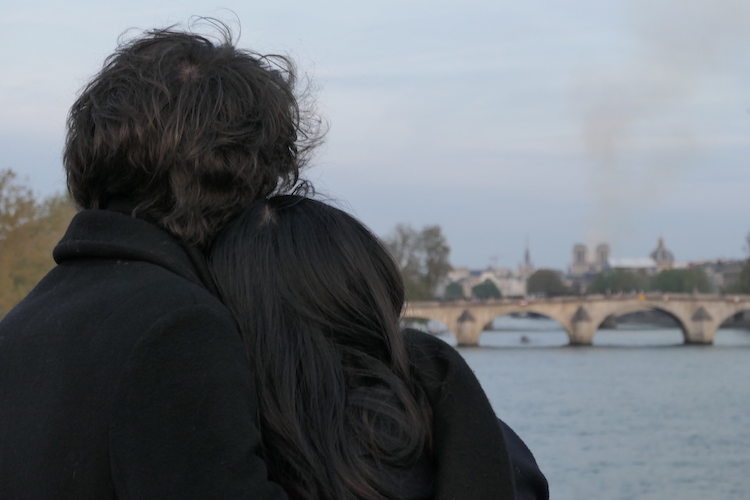 others only mildly interested. Tourists continued to buy love locks and below on the quayside, skateboarders continued to skate, joggers to jog. 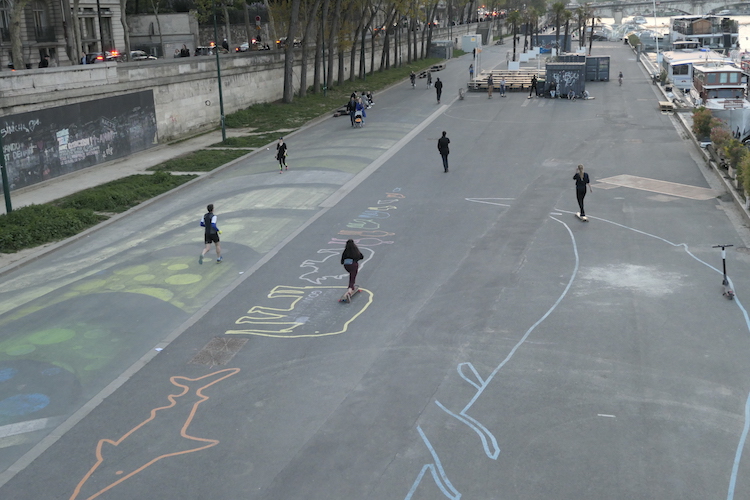 Indignation, almost anger, rose up at their seeming indifference. A dear friend, our city's soul, is at death's door, I wanted to shout. How can you smile or carry on as if this were just any Monday evening?

We went to sleep that night with smell of Notre Dame's burning wood and lead wafting through the open window, into our noses. 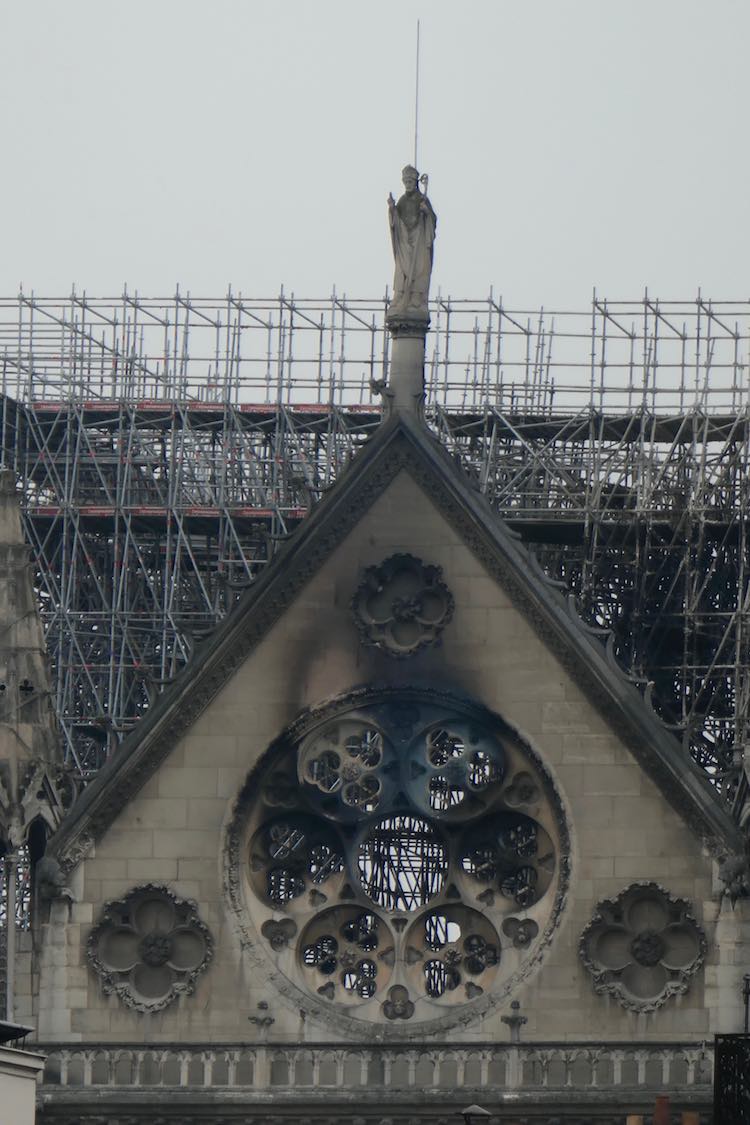 The next day I rode over to the cathedral on my bike. Close up I felt shocked and desolate all over again at this diminished, charred beauty. 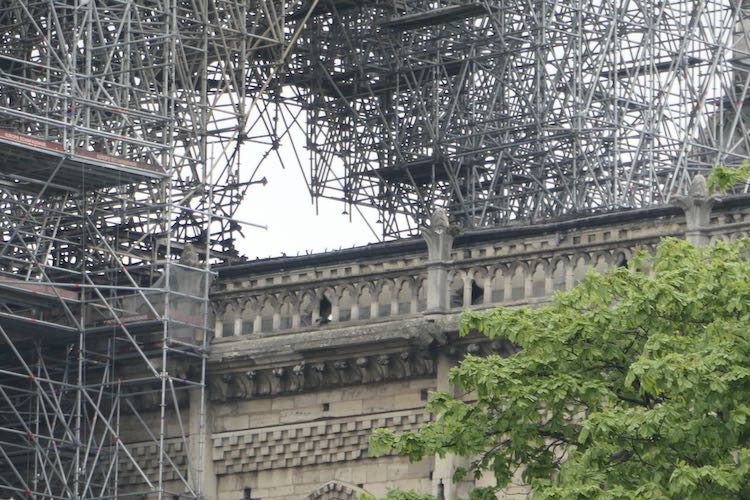 Where yesterday a spire stood

It didn’t take long in these heated times for the polemics to begin. The American president got the ball rolling with a tweet while the fire was still blazing: “Perhaps flying water tankers could be used to put it out. Must act quickly!” As if the French pompiers were taking their time, finishing up some charcuterie and wine, before moseying over to the church to have a look at what action might be required. Fire fighters are using all means, the French civil security agency promptly tweeted back, except flying tankers because the weight of so much water would cause the cathedral to collapse. 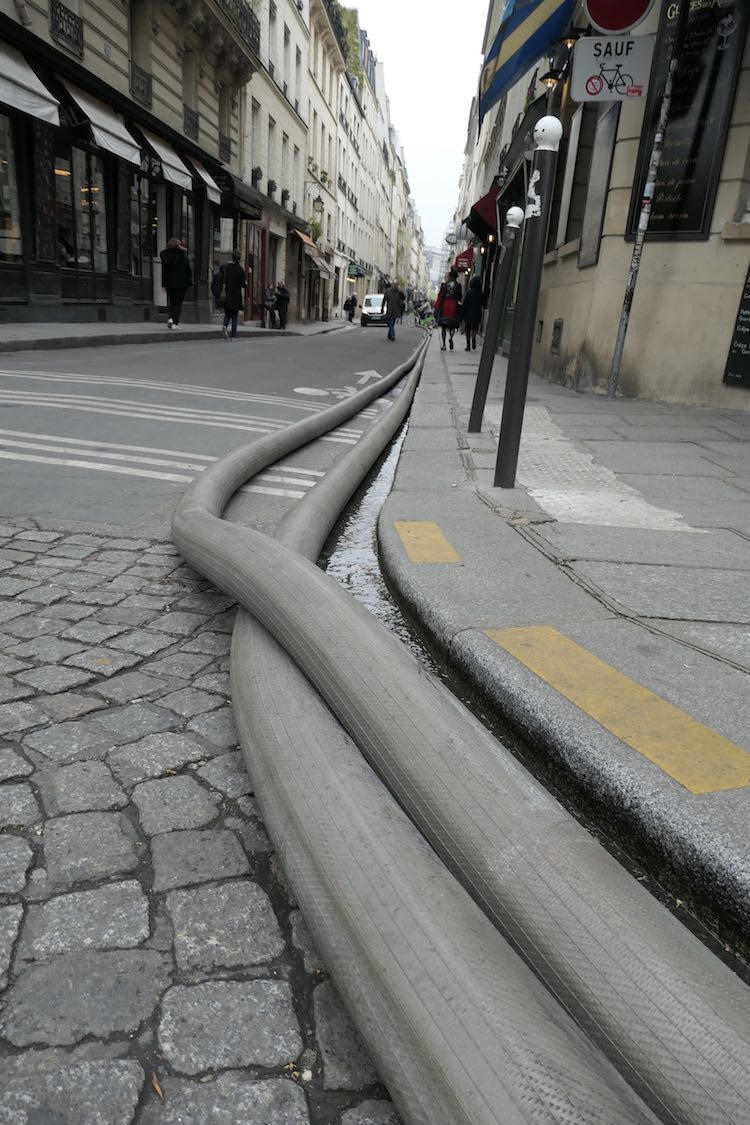 In France people quickly pointed fingers: It’s the French state’s fault for skimping on security! Fire still burning, business tycoons promised money for restoration. If François-Henri Pinault was going to give €100m, then his old rival Bernard Arnault would give €200m. Many corporations jumped on the band wagon and by the next morning €700 had already been raised. 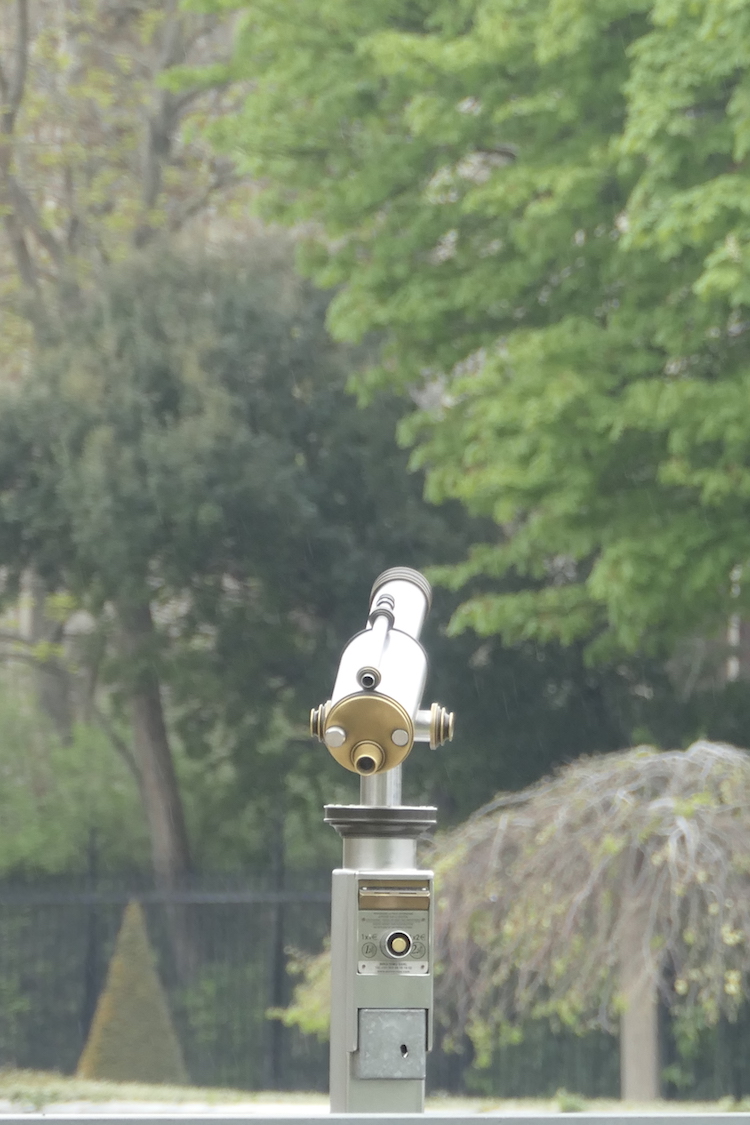 Quickly the money itself caused a furor. Why are the rich ready to help a building while so many humans, even right here in France (think gilets jaunes), suffer?

The latest flare-up is over how the cathedral should be renovated and it too is hotly political. The Macron government has suggested that the cathedral, already much modified over the centuries (the spire that so dramatically toppled over in the flames, for example, was added by 19th century architect Viollet-le-Duc), might be rebuilt with a contemporary touch. The right wing, extreme and otherwise, insists on an exact reproduction. #TOUCHEPASNOTREDAME, screamed Marine Le Pen in capital letters on Twitter.

All this cacophony confounds me, makes me want to put my hands over my ears. Maybe the state has skimped or at least been lackdaisical with the country's cultural heritage. Or maybe not. It is wonderful that individuals offer funds to resurrect the cathedral but was the cash one-upmanship, before the fire was even extinguished, a bit crass, especially given the spiritual nature of their target? And isn't it true that Notre Dame is just a building, albeit one with "a powerful emotional hold over people," as my friend Eileen said. Shouldn't the titans of inudstry be competing to alleviate human misfortune first? And at this early stage is it really the place of politicians to be grandstanding as aesthetes? Or, looking closer to home, who am I to feel anger at the way other people do or don't react to a fire?

Who's to know what's right or wrong anymore? 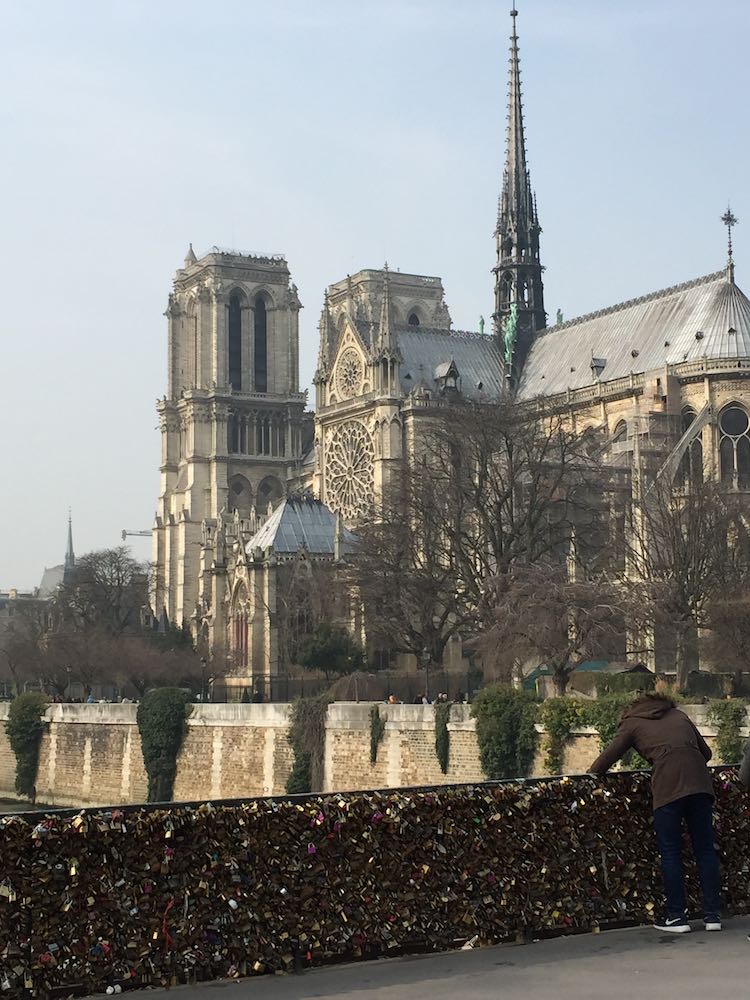 People have always had varied reactions, diverging opinions. The difference now is that there are so many ways to share or blare them. It can almost feel like an obligation. Here I am, for example, throwing my own tiny twigs on the blaze with this blog, with the two photos I posted on Instagram and Facebook.

The cause of this apocalyptic fire is unknown. It may remain a mystery forever. I wouldn’t be surprised if Notre Dame, the sublime embodiment of what we human beings are capable of creating, weren't sending us a message: look where all this heat is getting you. Cool down. Or else.