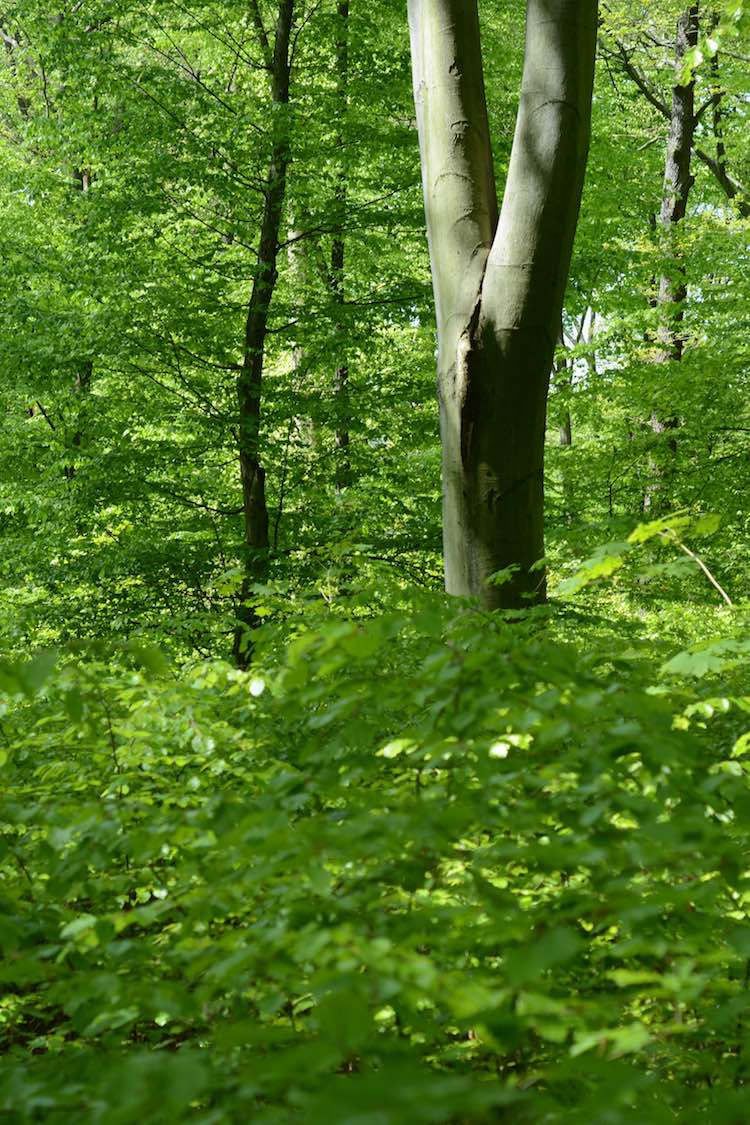 When my friend Cathy S was a little girl, she came home from school one day and said to her mother: “I’ve made a new friend.”

Not surprisingly Cathy became a poet but she might have been German. 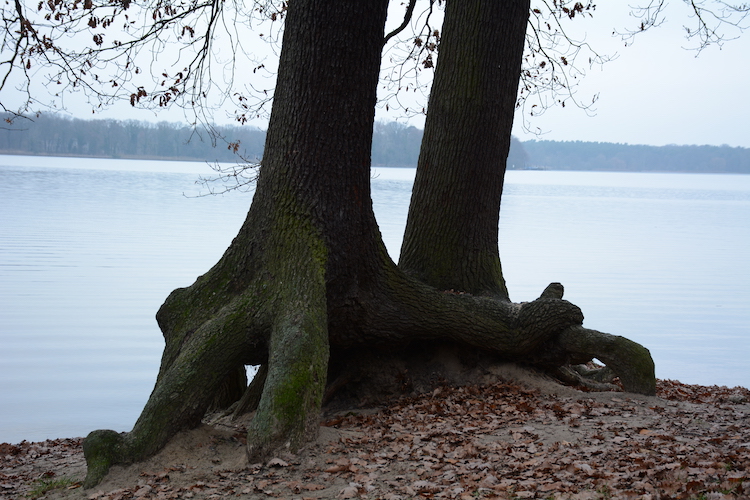 Trees are taken seriously here in Berlin and are a huge presence: the streets are home to 431,000 of them. When the parks and woods are thrown into the calculation—and there are 23 larger than 50 hectares (124 acres) and 80 between 10 and 50h—the number rises to around a million. Since all but the spindliest of saplings are numbered…

…you know the statistics are reliable. The density is especially astonishing since by the end of the Second World War, the tree population had been as decimated by bombs as the rest of the city, which was 80% destroyed. Here, for example, is how Berlin's largest park, the Tiergarten, looked after the War: 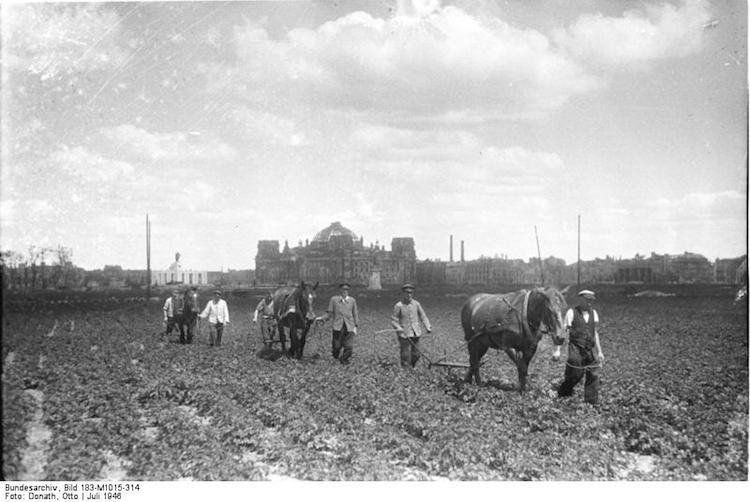 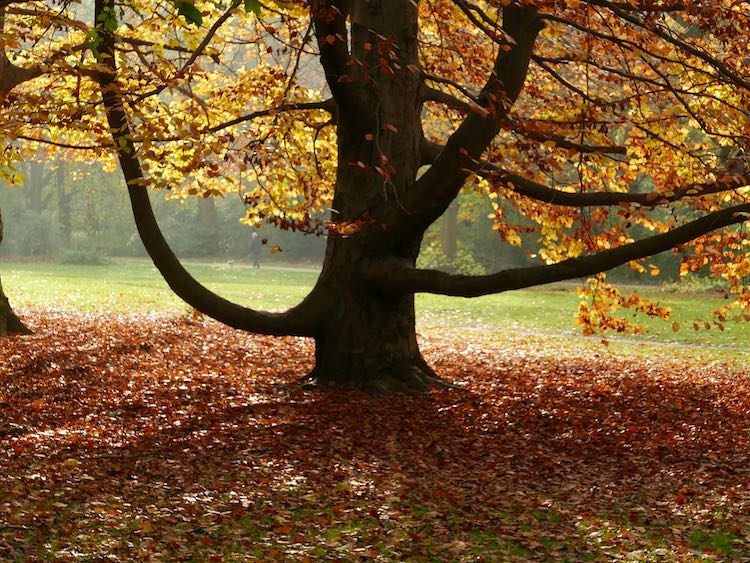 A denizen of today's Tiergarten

Berlin may be a particularly prolific example but it's a national phenomenon. The whole country has a thing about trees and forests, dating back hundreds of years. Some claim that it developed when Napoleon occupied the territory in the early 19th century. That the German embrace of natural nature was a reaction to the control-freak French approach and that this anti-French stance helped define the growing sense of German nationhood. Grimms’ fairy tales, first published in 1812, just as Napoleon was losing his hold on Europe, would certainly reinforce that idea. Think, for example, of Little Red Riding Hood or Hansel and Gretel or The Musicians of Bremen or Snow White, all of which take place or have scenes in the forest’s depths. About this time too the über-Romantic painter Caspar David Friedrich was relying heavily on trees to create mood. 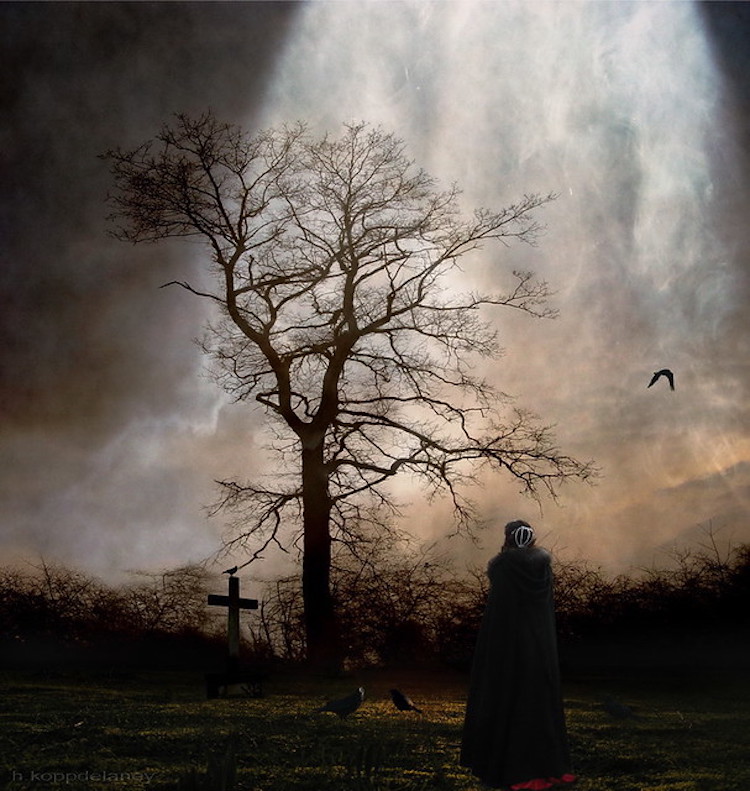 The Nazis picked up on the Romantic fixation and exploited it—but you can't blame the trees for that.

In any case it’s not surprising that in 2015 it was a German who wrote the book The Secret Life of Trees. In it Peter Wohlleben describes the sophisticated support system of trees in forests. He demonstrates how very similar their relationships are to human family and social structures. And surely only a German could have turned such unsexy subject matter into an international bestseller. 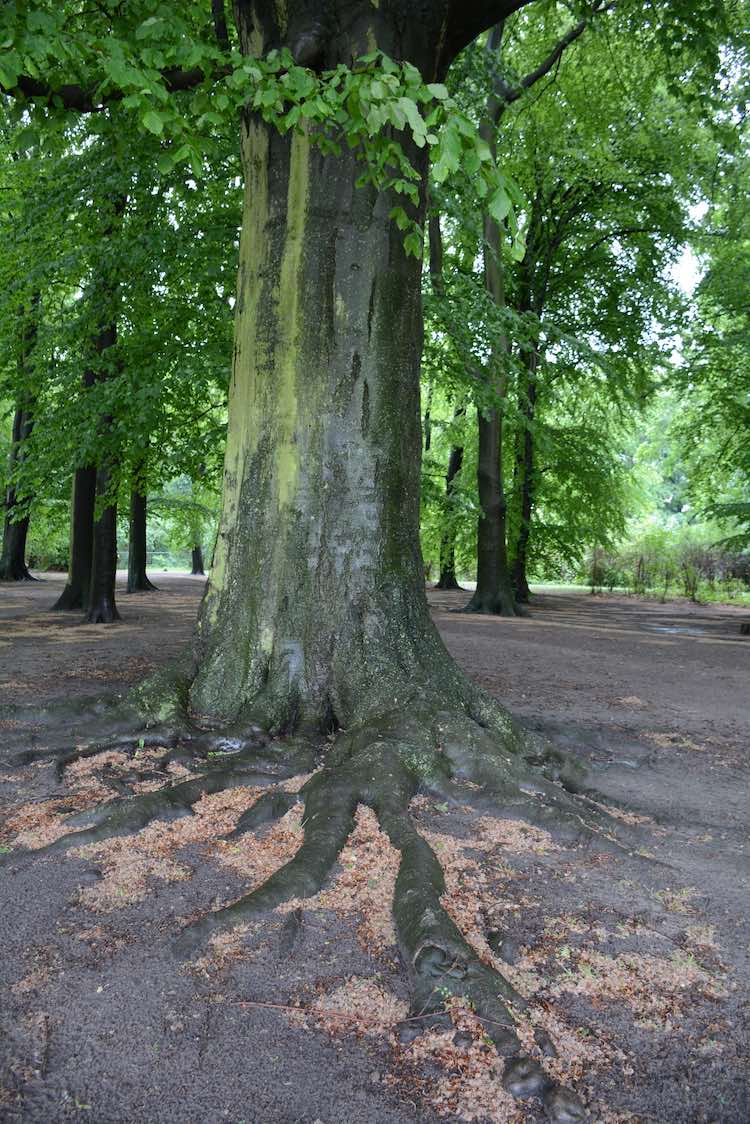 First with Elsa, now with Tasha, I have done a lot of walking in Berlin's parks and woods. The Bezirk where I live, thanks in part to the Treptower Park and the contiguous Plänterwald, is the most tree-rich district in this green city with almost 7000 hectares (17,300 acres) of wooded area. I have had ample occasion to witness German fusion with the forest. It is common, for example, to see a person stop and stare at a particular tree, approach it, touch the trunk. Trees are often used for family fun and bonding. 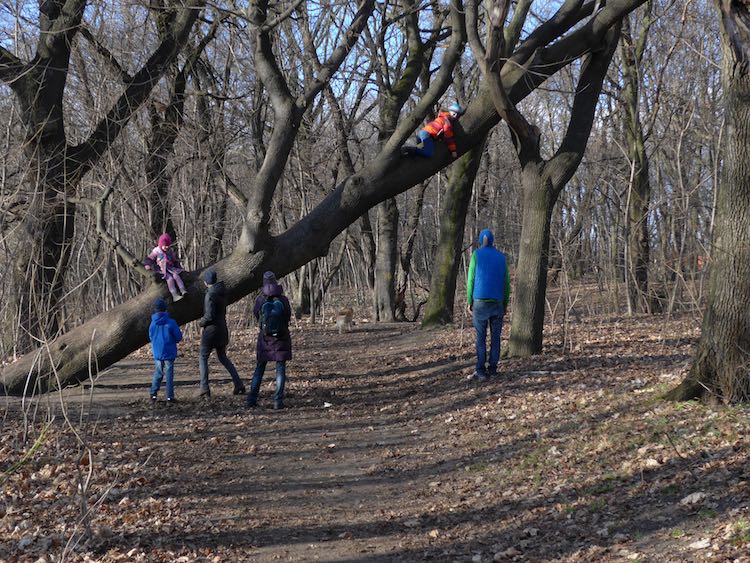 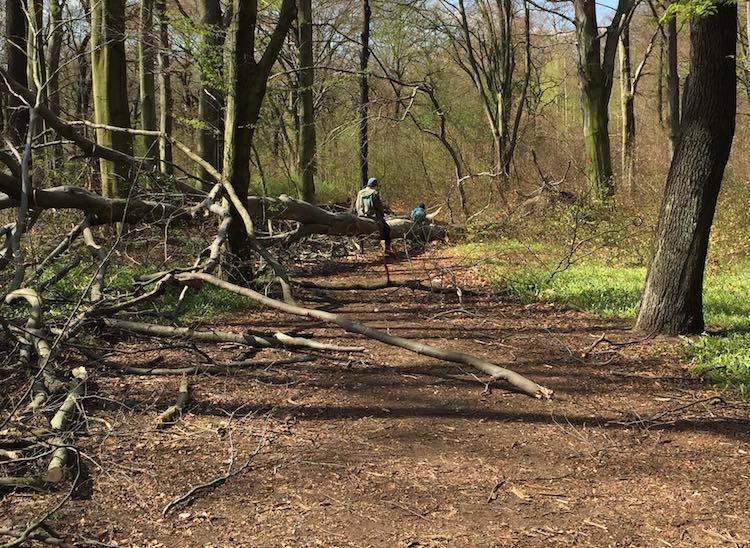 Then there’s the curious habit of building tepee-like structures with loose sticks and logs. It may be a manifestation of the bizarre German fascination with the American West and Native Americans but I'm not sure. I've never seen anyone actually sitting inside these structures. 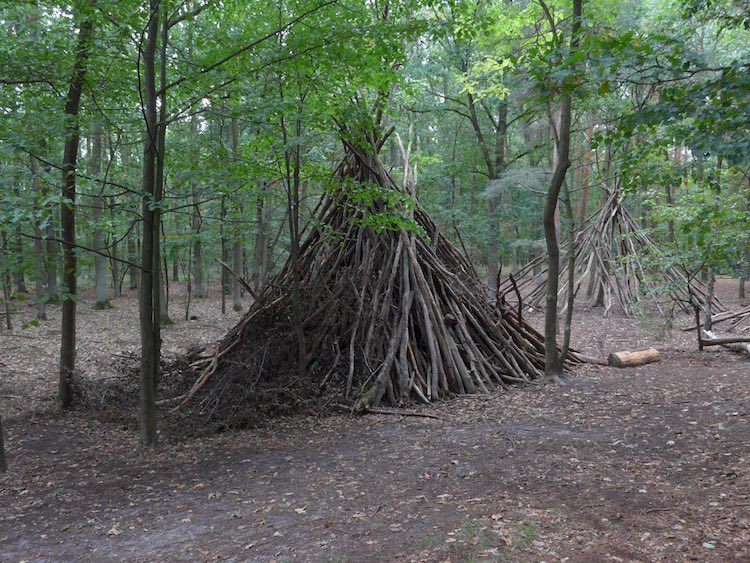 Even in death trees are respected. Many rotting specimens are left in place, sometimes with signs informing the public that though dead they continue to house insects, which feed birds, all contributing to a healthy ecosystem. Others are immortalized in sculpture. 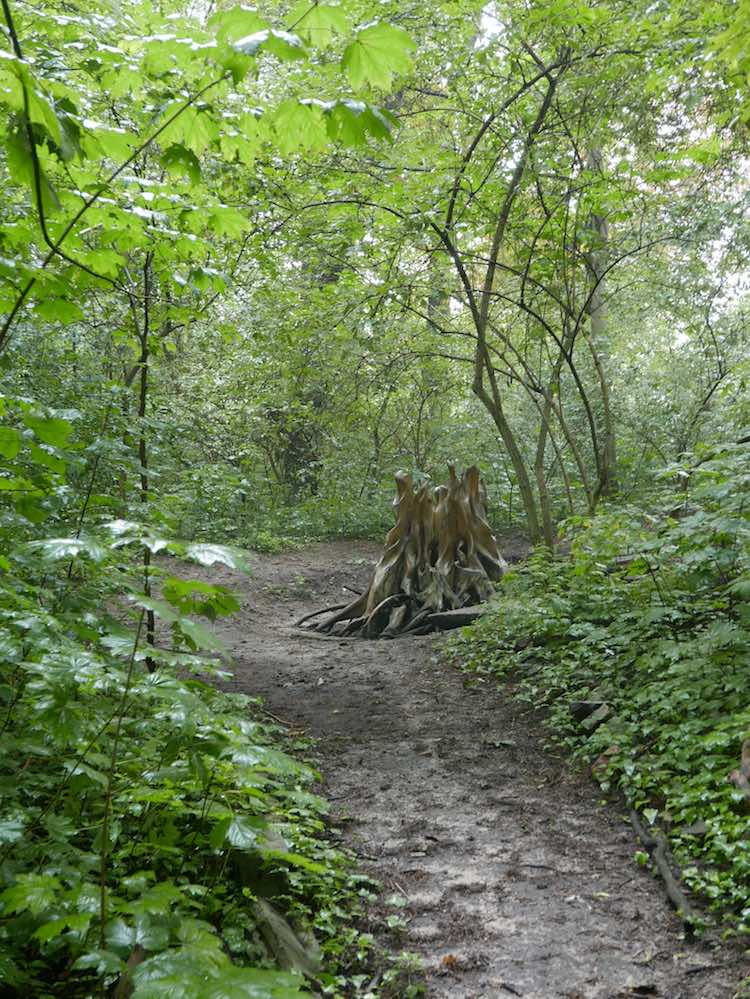 So I understand exactly what the Grimm brothers, Caspar David Friedrich and Peter Wohlleben are talking about. Trees can spook you... 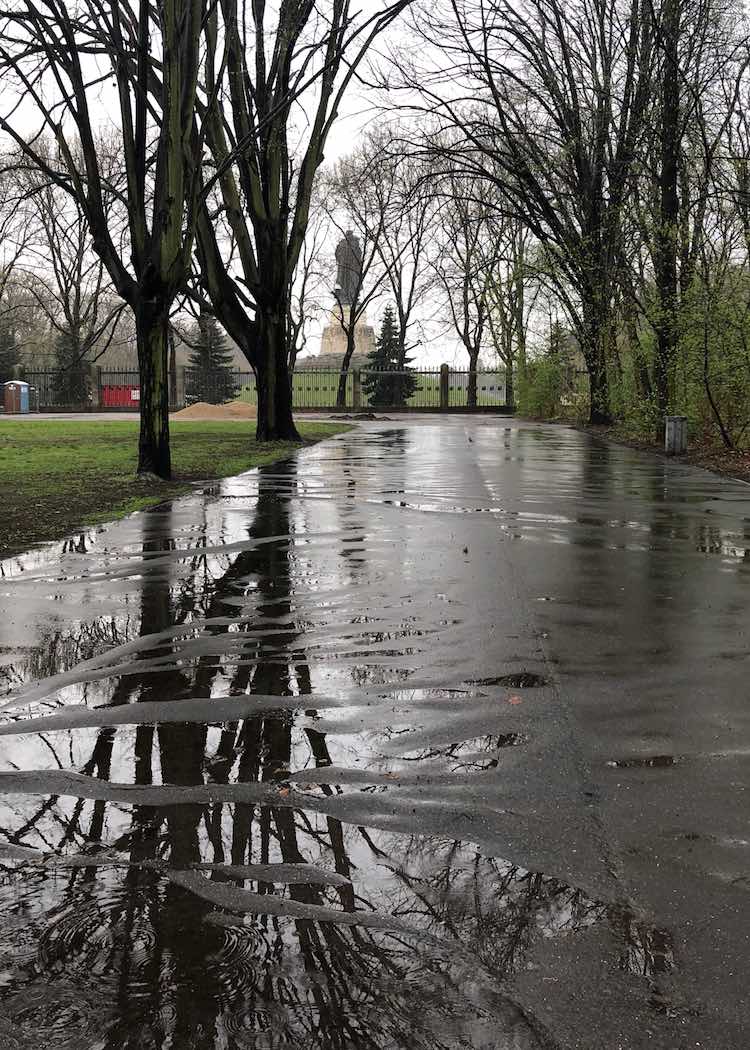 ...or they can cause your spirit to soar. 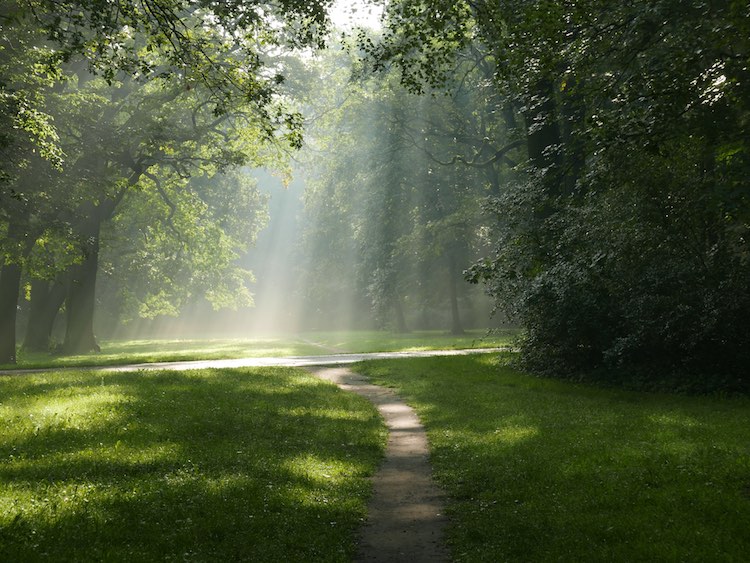 Like with Cathy, many have become friends who give off not just oxygen but Strahlungen, vibes, that do indeed make them seem quite human. 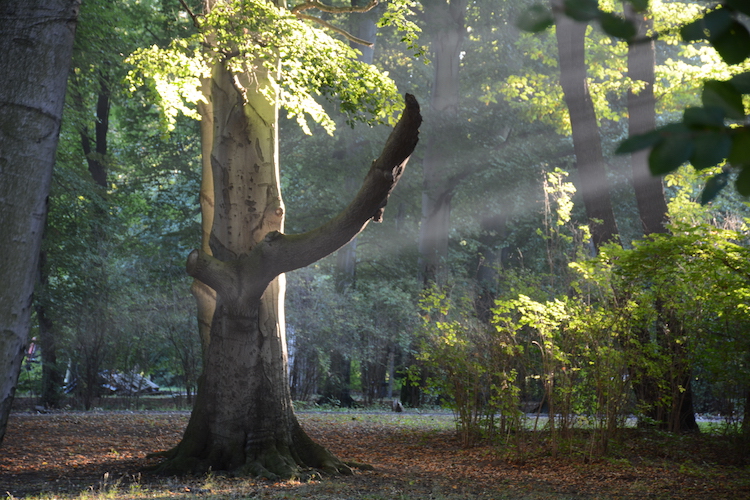 Their size and majesty are a humbling, daily reminder to me of how lucky we are to share the planet with these beings, especially in spring when they transform Berlin’s drab, sad landscape into a lush assembly of green. 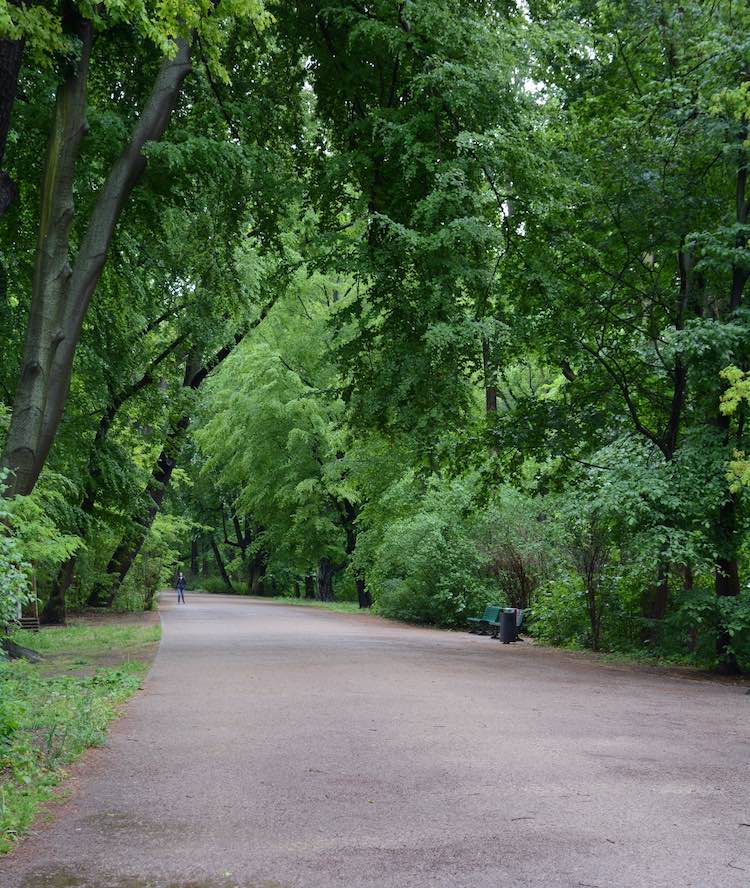 we are very small

How sad that they are imperilled in our frenetic, solipsistic world. The city is threatening to turn a track in the middle of the Plänterwald into a road so that people can reach the revitalized amusement park by car. Thanks to climate change, which induced a freak storm in 2017 and a crippling drought last summer, 7000 Berlin trees have died in the last two years. In 2019 there's been almost no rain in months; it breaks my heart.

Perhaps I am particularly sensitive to and appreciative of tree life here this spring because it is our last. As many of you know or have surmised from recent blogs (defining chez moi and buying a new house), we are leaving Berlin and moving back full-time to France. I'll write more about that when we actually move mid-June but suffice it to say now that I'm really going to miss my woodland friends. 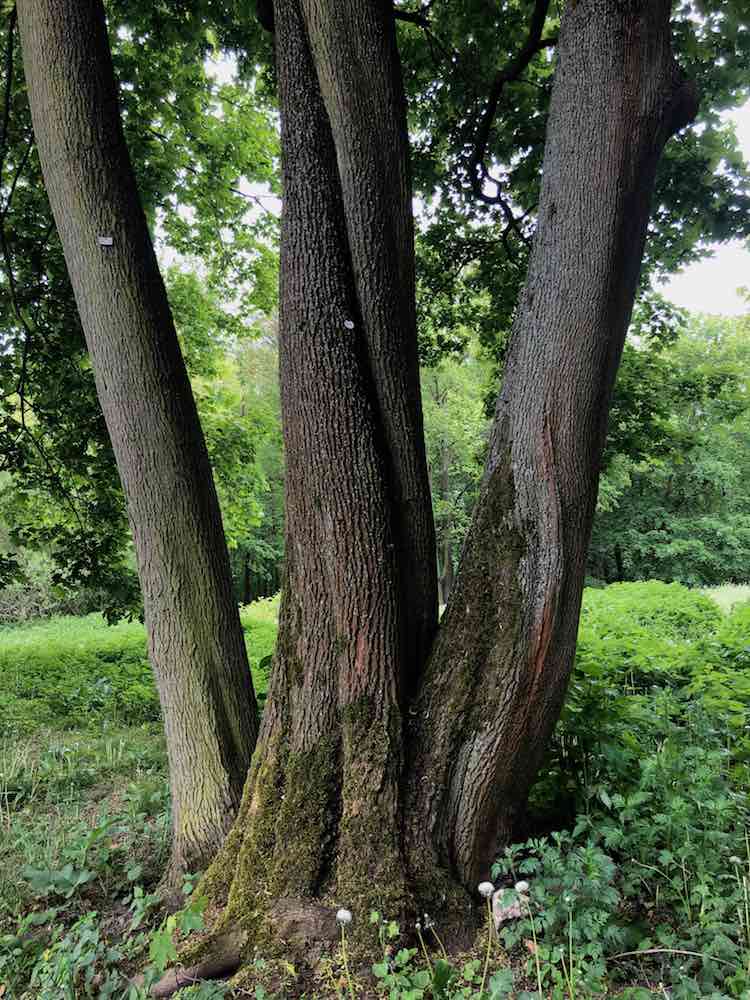